450 The Talons of Weng-Chiang: Part Three

"Lord, I promise you will have the great cabinet of Weng-Chiang before another dawn!"

Leela evades Mister Sin by jumping through the window where she meets the returning Doctor who is fired on by Chang who flees in a coach, pursued by Leela who climbs onto the rear. Litefoot shows the Doctor the Chinese Puzzle box he thinks they were trying to steal that the Doctor identifies as advanced technology. Chang returns to the theatre and his lord's lair, then goes to seek women for his master to feed on, followed by Leela. Leela disguises herself as one of the women Chang had kidnapped to infiltrate the lair. The Doctor & Litefoot find where the Fleet meets the Thames allowing the Doctor to follow it's passage underground towards the theatre. Leela watches as another woman is placed in the distillation chamber and has her life drained into Chang's hooded master. She overpowers him and escapes into the sewer, where he summons one of his giant rat guards. The Doctor finds Leela just as she's grabbed by the rat's jaws....

Episode 2 improved for me massively this viewing. Episode 3..... less so. Not sure why either. The only thing I can put my finger on is that Jago's not on the screen much.

For those who hadn't worked it out the box in Litefoot's possession is all but confirmed as the Time Cabinet Chang and his master are seeking!

LITEFOOT: I wonder what they intended?
DOCTOR: Robbery?
LITEFOOT: Well, there are some pretty valuable things here. That K'ang-hsi vase, for instance. My family brought that back from Peking. Or that Chinese puzzle box.
LITEFOOT: It doesn't open. Chap spent a week here once looking for a secret spring.
DOCTOR: Fused molecules.
LITEFOOT: No, no, no, no. Lacquered bronze.
DOCTOR: It's extraordinary. It's from this planet.
LITEFOOT: A parting gift from the Emperor.
DOCTOR: Technology this advanced? Ah! Got it! Well, of course, that's the answer.
LITEFOOT: What the Dickens are you raving about, Doctor?
DOCTOR: Weng-Chiang! 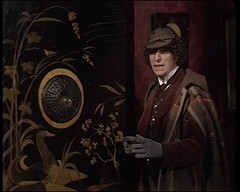 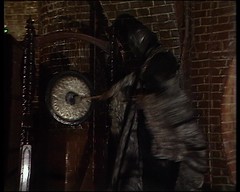 Interestingly at this stage the villain hasn't been identified as Weng Chiang. We're all assuming it is but Chang, the only person he's associated with, hasn't explicitly named him.

I did giggle at the gong he and Chang use to summon the giant rat! A cross between "Dinner is served" and the Rank gong!

Talons of Weng Chiang is Doctor Who's second trip down London's sewers. The first was in 1968 during The Invasion when the Cybermen were hiding down there. We'll be back down the sewers again for attack of the Cybermen in 1985. The enclosed tunnels do make a lovely enclosed set!

The grisly secret of what has happened to the disappeared women is revealed: Weng Chiang has been draining their energy to feed himself! 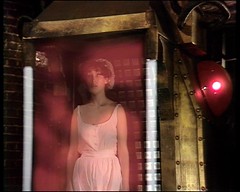 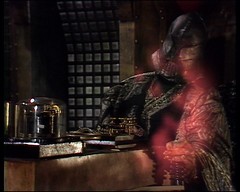 The Doctor is worried that the missing Leela will soon share their fate:

LITEFOOT: Haven't you slept?
DOCTOR: Sleep is for tortoises.
LITEFOOT: Any news of Miss Leela?
DOCTOR: Not yet.
LITEFOOT: Perhaps we should inform the police?
DOCTOR: No, there are already nine missing girls on their list.
LITEFOOT: Oh yes, but surely missing under very different circumstances.
DOCTOR: No. If my suspicions are correct, then I know what those poor girls were used for, and I can't imagine a more grisly fate. He's a blackguard.
LITEFOOT: Who's a blackguard?
DOCTOR: I don't know who's a blackguard. Some slavering gangrenous vampire comes out of a sewer and stalks this city at night, he's a blackguard. I've got to find his lair and I haven't got an hour to loose. Look. You see? I've been trying to trace the line of the sewers. That's the Thames, this is the line of the Fleet, and that is the Palace Theatre.
LITEFOOT: I'm beginning to see what you're getting at.
DOCTOR: Good. Good.
LITEFOOT: Yes, well, er, if you've finished with the tablecloth, I think I'd better dispose of that before my housekeeper arrives.
DOCTOR: Right.
LITEFOOT: How'd you know the course of the Fleet? It's been covered for centuries.
DOCTOR: I caught a salmon there once. Would have hung over the sides of this table. Shared it with the Venerable Bede. He adored fish.
DOCTOR: Professor, you don't happen to have an elephant gun, do you?
LITEFOOT: Elephants? Why on Earth do you want an elephant gun?
DOCTOR: We're about to embark on a very dangerous mission.
LITEFOOT: Well, I've a Chinese fowling piece if that's any good. Used for duck, mainly.
DOCTOR: Made in Birmingham. Yes, that's the main requirement. Could you get me a small boat?
LITEFOOT: I imagine so. May I ask the purpose of these preparations?
DOCTOR: Yes. To find the confluence of the Thames and Fleet, Professor, then to follow the Fleet.
LITEFOOT: And then?
DOCTOR: Oh, and then we shall see. 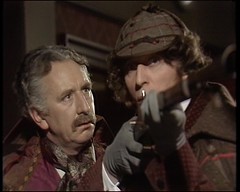 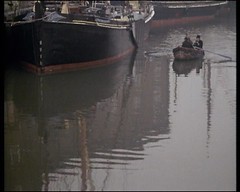 This then leads them to their trip by boat to find where the Fleet meets the Thames:

DOCTOR: There it is, fifty yards ahead.
LITEFOOT: Sit down, Doctor. The man knows these waters.
DOCTOR: I've always enjoyed messing about in boats.
LITEFOOT: I think this entire enterprise is extremely rash and ill-considered.
DOCTOR: My dear Litefoot, I've got a lantern and a pair of waders, and possibly the most fearsome piece of hand artillery in all England. What could possibly go wrong?
LITEFOOT: Well, that for a start. It hasn't been fired for fifty years. If you try to use it, it'll probably explode in your face.
DOCTOR: Explode? Unthinkable. It was made in Birmingham. Tie up over there, skipper. 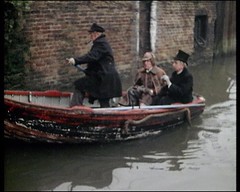 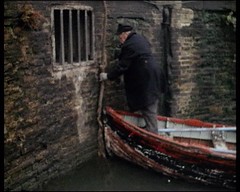 These scenes are filmed in St Katharine's Dock previously seen in episode one and before that in Dalek Invasion of Earth. Although the area has been considerably redeveloped since then all the locations from both stories, especially those in this episode, are still recognisable! 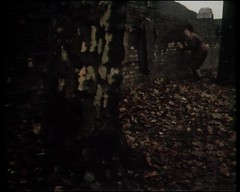 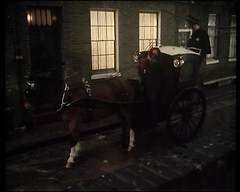 Leela's stalking of Chang brings us back to Wapping Pier Head, the location with the haystack covered car in the previous episode! Here a wall provides Leela something to hide behind in location that looks quite different from the street the other side. The finals shots in this scene successfully unite the two seemingly disconnected parts of the location! 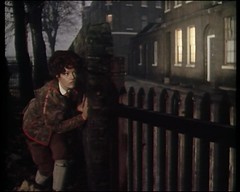 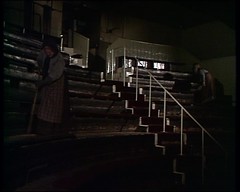 And finally we're briefly back in The Royal Theatre, Northampton for the scenes of the cleaners at work before one of their number becomes Weng Chiang's latest victim!

Appearing as Li H'sen Chang we have English actor John Bennett disguised in make up. He was previously General Finch in Invasion of the Dinosaurs. I've just seen him this week in a 2004 New Tricks! Looking at his IMDB entry I can see a Blake's 7 to his name when he appeared as Coser in Weapon, He was the Medical Officer in New Faces, Old Hands, the first episode of Porridge who is then succeeded by a doctor played by Horns of the Nimon's Graham Crowden. You may also have seen him in I, Claudius as Xenophon in Fool's Luck, The Professionals episode Backtrack as Inspector Truitt and Jonathan Creek: The Three Gamblers as Frank Geiger. However IMDB's listing of him in Alien Nation: Millennium as Officer Laskau looks slightly dubious! 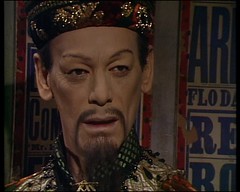 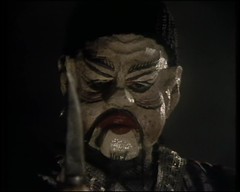 His "dummy, Mr Sin, is played by Deep Roy, later to appear as the Posicarian delegate in Mindwarp, the second section of Trial of a Timelord. He's best known now for being the Oompa Lumpas (all of them) in the 2005 film Charlie & the Chocolate Factory. But His CV has science fiction credits aplenty on it of which this appears to be the first. Blake's 7 features four times: a Decima in The Web, The Klute in Gambit, the voice of Moloch in Moloch and a Link in Terminal. He was Princess Aura's Pet in the 1980 Flash Gordon film and was Droopy McCool in 1983's Return of the Jedi. He was Badlaa in the X-Files episode Beggar Man. You can see him in Transformers: Revenge of the Fallen as an Egyptian Guard and he's in all three modern Star Trek films as Keenser.