"A plank. The theory is very simple. You walk along it. At the end, you fall off, drop one thousand feet. Dead!"

The Mentiads rescue the Doctor, Kimus & Romana and take them back to their home where Mula & K-9 await. The Captain punishes the guard responsible by killing him. The Doctor explains to the Mentiads what Zanak does. Mr Fibuli comes up with a way of neutralising the Mentiads powers using minerals found on Calufrax. The Mentiads tell The Doctor of Zanak's history and the arrival of the Captain in a spaceship crash. K-9 detects that the Captain has stepped up mining operations. The nurse, sitting in the Captain's chair, is pleased at the work he is undertaking. The Doctor & Kimus are captured trying to steel an aircar and are taken to the Bridge. Mr Fibuli traces the mineral they need to repair Zanak to Earth and make preparations to jump there & consume it bringing them, as he confirms to the Nurse, closer to achieving their objective. K-9 steals an aircar and follows the Doctor to the Bridge. The Captain confronts the Doctor and shows him his trophy room, a collection of planets mined and crushed down to small spheres. The Doctor wonders what it is for, but they are interrupted by the approach to the Bridge of the Mentiads. The Captain sends his robot parrot, Polyphaseavatron, to kill Kimus but K-9 arrives and chases it through the corridor, allowing the Doctor & Kimus to escape, sealing the Captain and his crew in the bridge. Breaking into a locked chamber they find Queen Xanxia suspended in the last few seconds of life by the energy drained from the planets Zanak has consumed. K-9 destroys Polyphaseavatron, and he & Kimus are sent to destroy the engine room. The Doctor goes to confront the Captain, enraging him when he presents him with the remains of his pet. Opening the bridge windows a plank is extended and the Doctor forced along it falling of the end to plunge to his doom 1000 feet bellow..... 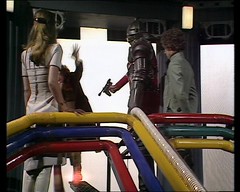 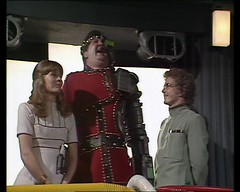 How's that for a cliffhanger? The Doctor has just plunged to his death? How's he going to get out of that? Saved by someone in an aircar? Of course I've seen part 4 and I know how this is going to end... But what I had never noticed before was the Doctor finding the means in Queen Xanxia's chamber. 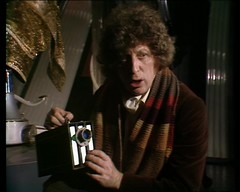 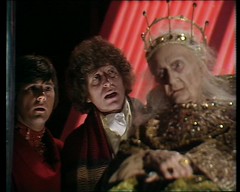 DOCTOR: So Zanak was a happy, prosperous planet?
PRALIX: Yes, till the reign of Queen Xanxia.
MENTIAD: May her spirit be accursed.
PRALIX: She had some kind of evil powers. The legend says she lived for hundreds of years.
DOCTOR: Come on, that's not necessarily evil. I've known hundreds of people who've lived for hundreds


The ancient Queen Xanxia is played by Vi Delmar, who reportedly wanted an extra fee for removing her false teeth!

DOCTOR: Those are the time dams.
KIMUS: What, you mean they stop time?
DOCTOR: Not completely, but they can slow down the flow of time in the space between, given enough energy.
KIMUS: That's repulsive. What is it?
DOCTOR: That's your beloved queen, Xanxia.
KIMUS: What? No, no, Xanxia's dead.
DOCTOR: Oh no, she's not. She's suspended in the last few seconds of life.
KIMUS: You mean she can hear me? But I just called
DOCTOR: No, she can't.
KIMUS: Does she know we're here?
DOCTOR: No. Not while she's between those two things there.

DOCTOR: To find enough energy to fuel those dams, you'd need to ransack entire planets.
KIMUS: So whole other worlds have been destroyed with the sole purpose of keeping that alive?
DOCTOR: Yes. There must be something more to it than that.
KIMUS: Even more?
DOCTOR: Yes. Would you go to those lengths just to stay alive?
KIMUS: Not in that revolting condition, no.
DOCTOR: No, not in that condition, but in what condition?


The answer to that question comes next episode, but the means of powering the time Dams we saw earlier: 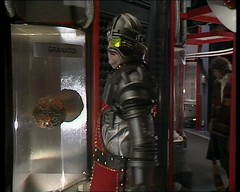 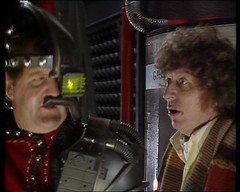 CAPTAIN: My trophies, Doctor. Feast your eyes on them, for they represent an achievement unparalleled in the universe.
DOCTOR: What are they? Tombstones? Memorials to all the worlds you've destroyed?
CAPTAIN: Not memorials. These are the entire remains of the worlds themselves.
DOCTOR: You come here on the wanton destruction you've wreaked on the universe.
CAPTAIN: I come in here to dream of freedom.
DOCTOR: Did you just say the entire remains of the worlds themselves?
CAPTAIN: Yes, Doctor. Each of these small spheres is the crushed remains of a planet. Million upon millions of tons of compressed rock held suspended here by forces beyond the limits of the imagination. Forces that I have generated and harnessed.
DOCTOR: That's impossible! That amount of matter in so small a space would undergo instant gravitational collapse and form a black hole!
CAPTAIN: Precisely.
DOCTOR: What? But Zanak would be dragged into a gravitational whirlpool
CAPTAIN: Why doesn't it? Because the whole system is so perfectly aligned by the most exquisite exercise in gravitational geometry that every system is balanced out within itself. Which is why we can stand next to billions of tons of super- compressed matter and not even be aware of it. With each new planet I acquire, the forces are realigned but the system remains stable.
DOCTOR: Then it's the most brilliant piece of astro-gravitational engineering I've ever seen. The concept is simply staggering. Pointless, but staggering.
CAPTAIN: I'm gratified that you appreciate it.
DOCTOR: Appreciate it? Appreciate it? What, you commit mass destruction and murder on a scale that's almost inconceivable and you ask me to appreciate it? Just because you happen to have made a brilliantly conceived toy out of the mummified remains of planets
CAPTAIN: Devil storms, Doctor! It is not a toy!
DOCTOR: What's it for? Huh? What are you doing? What could possibly be worth all this?
CAPTAIN: By the raging fury of the sky demon, you ask too many questions. You have seen, you have admired. Be satisfied and ask no more!

When I first saw this story as a child the thing I really liked was the battle between K-9 and Polyphasavatron, the Captain's parrot! 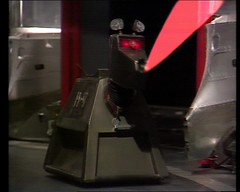 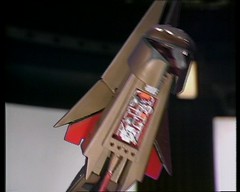 As we mentioned in Part 1, Douglas Adams was at the time this story was made working on the radio version of The Hitchhiker's Guide to the Galaxy, which was later followed by the Television version. Unsurprisingly a few of the cast, which is largely the same over both media, have Doctor Who connections:

Onto who's playing the Mentiads, who were largely absent from episode 2!

The Mentiads' leader is played by Bernard Finch He'd appeared in the acclaimed An Age of Kings, the BBC adaptation of William Shakespeare history plays. He goes on to play Trevor in the missing Out of the Unknown third season episode Random Quest and can be seen in The Professionals as D.I. Harrington in Operation Susie. 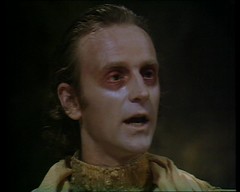 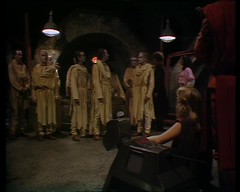 There's a LARGE number of extras making up the ranks of The Mentiads and they all have Doctor Who form! We'll start with Peter Whitaker who appeared in the series the earliest when he played Inspector Gascoigne in The Faceless Ones episode 1. He was then a Weather Station Worker in The Seeds of Death episode five and a Thal Politician in Genesis of the Daleks. He'll be back as a Grecian Man in Four to Doomsday and an Onlooker in Remembrance of the Daleks. He was in Blake's 7 as a Scientist in Project Avalon and Doomwatch as a Ministry Inspector in Train and De-Train and a man in Flood.

Colin Thomas didn't make his Doctor Who debut till the Pertwee era playing a UNIT Soldier in Doctor Who and the Silurians. He was then Sole in The Face of Evil and a Station Policeman in The Talons of Weng-Chiang, He returns as a Foster in The Keeper of Traken, Time Lord in Arc of Infinity, an Elder in Planet of Fire and a Pallbearer in Remembrance of the Daleks. 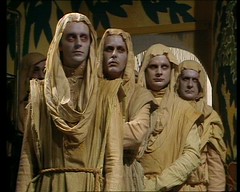 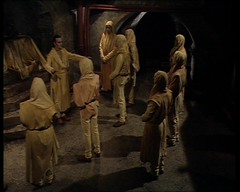 Brychan Powell also appeared with Jon Pertwee playing a Daleks' Guard and Russian Aide in Day of the Daleks, a Solonian in The Mutants and the Prime Minister in The Green Death. He's back later this year as a Noble in The Androids of Tara then a Logopolitan in Logopolis, a Walk-on in Black Orchid and a Citizen in Planet of Fire. He plays a man in the Doomwatch episode Flood.

Ray Knight makes his Doctor ho debut alongside Tom Baker playing a Soldier in Robot. He's then a Sorenson Monster in Planet of Evil and a Coven Member in Image of the Fendahl. He's back as Lexa's Deon in Meglos and the plays the ill fated Policeman with Bike in Logopolis part one! He's also in Planet of Fire as a Trion, and then is a member of Glitz's Crew in Dragonfire. He's been in Blake's 7 as a Federation Trooper in Countdown, a Rebel in Rumours of Death and another Federation Trooper in Warlord. 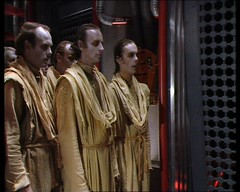 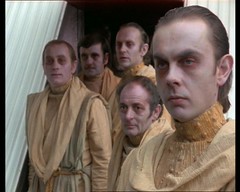 Tony Hayes' sole previous who appearance was as a Kaled Scientist in Genesis of the Daleks.

Derek Suthern first appeared as a Path Lab Technician in The Hand of Fear. He's back twice this year as a Gracht Guard in The Androids of Tara and a Mute in The Armageddon Factor. He's in the next season 3 times as a Guard in The Creature from the Pit, a Mandrel in Nightmare of Eden and a Guard in The Horns of Nimon and would have made a fourth appearance as a Krarg in Shada if that hadn't have been cancelled. That also deprives him of appearances in five consecutive Doctor Who stoies as he then plays a Argolin Guide in The Leisure Hive, the first story of the next season. He returns at the end of that season as PC Davis in Logopolis part one followed by playing a Cricketer in Black Orchid and a Man in Market in Snakedance. In Blake's 7 he was a Federation Trooper in The Way Back, a Scavenger in Deliverance, a Federation Trooper in Trial & Countdown, a Customer / Gambler in Gambit, a Hommik Warrior in Power and a Space Princess Guard / Passenger in Gold. He appears in the Roger Moore James Bond film The Spy Who Loved Me as an Atantis Guard and is in Fawlty Towers as a Hotel Guest in both The Germans and The Psychiatrist.

Finally Jeff Wayne, no not the famous one, will return in Warriors' Gate as a Tharil and as the Sctyheman in The Visitation. He's in the final episode of Blake's 7, Blake as a Federation Trooper.