"You may be a doctor, but I'm The Doctor. The definite article, you might say!" 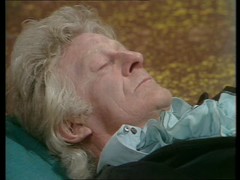 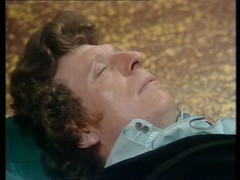 The Brigadier summons UNIT's Surgeon, Naval Lt Harry Sullivan to care for the delirious newly regenerated Doctor. At the Ministry of Defence Top Secret Weapons Research Centre SOMETHING cuts it's way in and steals the plans for the new disintegrator gun. Sarah begs a visitors pass for Think Tank, a research establishment, from the Brigadier. The recovering Doctor attempts to leave, finding the Tardis key in his boot and locking Doctor Sullivan in a lab cupboard where he's found by Sarah & the Brigadier who persuade him to stay and help find the missing weapon plans. A Ministry of Defence parts store is raided by the thing that stole the plans. The Doctor tries a number of outlandish outfits before settling on a long coat, scarf and hat. The Doctor finds evidence that local flora had been crushed by something weighing a quarter of a ton and the missing components could be used to help build the disintegrator gun. Sarah arrives at Thinktank meeting Hilda Winters & Arnold Jellicoe. The Doctor works out what else is needed to build the gun and has the factory making it guarded. However the thing tunnels in under the factory killing the guard and stealing the components. Sarah goes to see Professor Kettlewell, a former Thinktank member, who now researches alternative energy, to attempt to find out if they are continuing his work in robotics. Unit find the exit tunnel from the factory and discover giant foot prints leaving it. Sarah sneaks back into Thinktank, under the excuse she's left something behind and encounters a huge robot in Kettlewell's former lab. 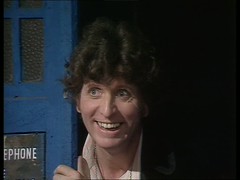 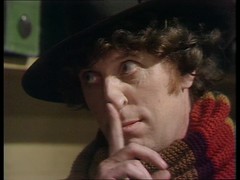 You can almost sum this episode up in two words: Tom Baker. My goodness what a find for the series. Eccentric in mannerism & appearance, and gifted with such a wonderful voice he settles into the part immediately. Pertwee spent most of his first episode unconscious and both he & Troughton were doubted as being the real thing. Tom Baker is the Doctor from the word go and his performance is all but fully formed from the start.

Born in Liverpool on 20 January 1934 Tom Baker had left school at 15 to become a Catholic Monk, but left the monastery after six years. He did his National Service in the Royal Army Medical Corps until 1957 at which point he became an actor. He married in 1961 to Anna Wheatcroft, having two sons Daniel and Piers before the relationship broke up and they were divorced in 1966. Mainly appearing on stage he broke into film & television in 1968. He memorably played the Monk Rasputin in Nicholas and Alexandra in 1971 before appearing in The Golden Voyage of Sinbad as the villain Koura. However by early 1974 he was a little down on his luck, having had two major film roles fall through and was working as a builders mate on a building site on Ebury Street in London. In desperation he sent a number of letters to various people he knew one of which was Bill Slater, who had directed him in The Millionairess, BBC Play of the Month for September 1972.....

Meanwhile Producer Barry Letts was hunting for Jon Pertwee's replacement as Doctor Who. (deep breath) Ron Moody, David Warner (who doesn't only do sci fi you know), Michael Bentine, Jim Dale, Fulton MacKay and Graham Crowden had all been considered for or offered the role. Barry's Boss Bill Slater, reminded by the letter he had received, suggested Tom Baker. Barry Letts met Baker and the next day he and then script editor Terrance Dicks caught a showing of The Golden Voyage of Sinbad which convinced them he was the right man for the job. Baker was summoned to the BBC Bar and offered the role. Baker's casting was announced on the 15th February 1974, after which he returned to the building site and bought his now former work mates a round of drinks. On Thursday 2nd April he was in the BBC Studios recording the regeneration scene at the end of Planet of the Spiders. 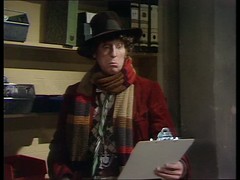 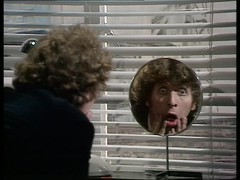 DOCTOR: Oh. As for the physiognomy. Well, nothing's perfect. Have to take the rough with the smooth. Mind you, I think the nose is a definite improvement. As for the ears, well, I'm not too sure. Tell me quite frankly, what do you say to the ears?

There's some decent stuff elsewhere in the episode "Mind you, the nose a definite improvement" is a little joke towards the departed lead actor: Jon Pertwee was always very concious of his nose. The Doctor trying on a variety of different clothes becomes a staple of most future regenerations as the Doctor tries various outfits, frequently old costumes, trying to establish his look. 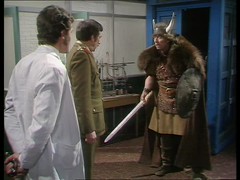 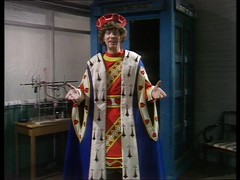 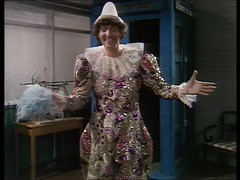 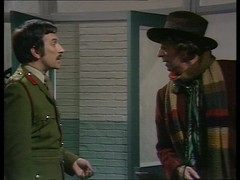 The Fourth Doctor's look was designed by future Oscar winner James Acheson. As is well documented he visited a lady named Begonia Pope with some wool and asked her to knit a scarf. She used all the wool resulting in the hugely long scarf that would become one of the fourth Doctor's enduring trademarks and one that's still associated with the program even now THIRTY years after it's final appearance.

In order to give the audience an element of the familiar the first story of the new season includes not only companion Sarah Jane Smith, played by Elisabeth Sladen, but also UNIT in the form of Nicholas Courtney as Brigadier Lethbridge-Stewart and John Levene as Sergeant Benton, both series regulars during the Pertwee era. 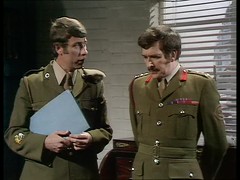 Brigadier, then Colonel, Lethbridge Stewart first appeared in episode three of the Web of Fear, shown on 17th February 1968. Now on 28th December 1974, nearly seven years later, for five of which he's been regularly appearing in the show, we finally hear his full name for the first time: Alistair Gordon Lethbridge Stewart. OK yes it had appeared in print before now in the first edition of Malcolm Hulke & Terrance Dicks' The Making of Doctor Who but this is the first time we hear it on screen. 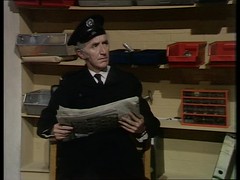 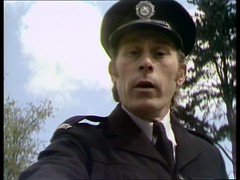 We get a rare appearance by a visible John Scott Martin, unencumbered by monster costume, as the security guard at the MOD parts store. You can also catch him as a villager in the Daemons and Hughes the miner in the Green Death. But most of the rest of the time he's Daleks and similar. There's also an appearance for regular extra Pat Gorman as the security guard at ThinkTank.

Departed script editor Terrance Dicks follows in the footsteps of his predecessors David Whitaker, Dennis Spooner, Gerry Davis and Derrick Sherwin by writing the first story after he leaves the role, replaced by regular writer for the series Robert Holmes who will later follow the tradition by leaving after Image of the Fendahl and then writing The Sunmakers. In the script Dicks' slips in a reference to a subject close to soon to be departed Producer Barry Letts' heart: alternative energy:

KETTLEWELL: I'm afraid I can't help you, Miss Smith. I don't know why you came to me.
SARAH: Well, I'm not too sure myself, to be honest. I just felt something in the air at Think Tank.
KETTLEWELL: Yes, I severed all connection with that establishment some time ago, when I became completely disillusioned at the direction all our research was taking. The road to ruination. I'm now devoting my life to alternative energy technologies.
SARAH: Solar cells, heat from windmills, that sort of thing?

Over the years that Letts and Dicks were in charge of the show it wore it's environmental credentials on it's sleeve no more so than during The Green Death at the end of the 1973 season. 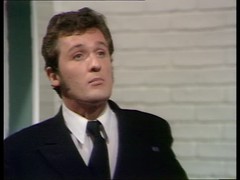 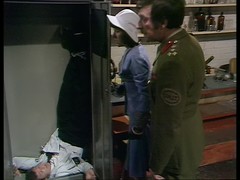 Along with the old we get some more new: Robot introduces us to new companion Navel Doctor Lt Harry Sullivan, played by Ian Marter. As you'll have seen from the list of potential Doctors in several of them weren't young men and the idea was a new male companion would do the action sequences. As it was a younger actor was cast as the Doctor (Tom was forty when he took the part up, the youngest actor so far to play him) but the male companion idea was retained, but its given the angle that the Doctor considers him a bit of a fool. His entrance here is a prime example:

DOCTOR: I tell you, Brigadier, there's nothing to worry about. The brontosaurus is large and placid.
(Doctor Harry Sullivan enters the room)
HARRY: This the patient, sir?
DOCTOR: And stupid.

Ian Marter had previously been a candidate for playing Mike Yates but due to an existing theatre commitment was unable to accept the role. Barry Letts remembered him and cast him as Lt John Andrews in Carnival of Monsters and then again here. Ian Marter holds the sad distinction of being the first actor who has played a Doctor Who companion to die, on 28th October 1986 his forty second birthday. 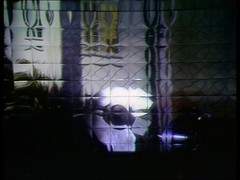 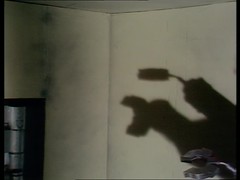 Then there's the robot itself, who the story is named after. Hinted at earlier in the episode with just a shot of it's hands and a few shots from it's point of view to go on alongside the ominous statement from the Doctor

DOCTOR: Something that brushes chains and electric fences like cobwebs. Something intelligent, that takes only what it needs and leaves the rest. Something that kills a man as casually as it crushes a dandelion.

Like all really good Doctor Who monsters we don't find out what it looks like until the closing moments as it looms over a terrified Sarah. 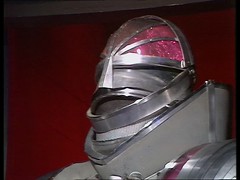 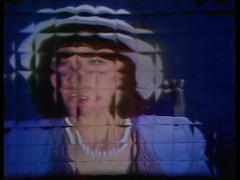 There's two main reasons I wanted to look at Tom Baker's early episodes again now. The first is that it is the 40th anniversary of their first broadcast and that probably serves to be commemorated. In the minds of most people of my generation Tom Baker still is THE Doctor who, hence the most appropriate quote above! For some the greatest moment of the 50th anniversary celebrations was Tom's superb unpublicised cameo in the anniversary special. The moment you heard his voice the years just rolled back. So happy anniversary Tom!