"Why should some alien life form invade Earth just to steal a new weapon? If they were that advanced, they'd have weapons of their own. Ha. Rather a splendid paradox, eh, Brigadier? The only ones who could do it wouldn't need to!"

Sarah is found by Miss Winters & Jellicoe who claim they set the robot on her as joke. She is allowed to talk with the robot and assured it isn't dangerous, demonstrated when it refuses to destroy her when commandeered. Jellicoe is angry as the robot has only just been reset and he believes it may have killed her when commanded. Sarah tells the Doctor & Brigadier about the robot. The Robot is sent to kill cabinet minister Joseph Chambers and steals something from the safe. The Doctor visits Professor Kettlewell to talk to him about the robot. The Brigadier discovers many members of Thinktank were members of the Scientific Reform Society. The robot visits Kettlewell saying it has been given orders that conflict with it's programming. Sarah interviews Mr Short from the Scientific Reform Society that leave her unimpressed. The Brigadier & Doctor visit Thinktank but are unable to see the robot because Miss Winters claims it's been dismantled. Harry Sullivan infiltrates Thinktank posing as a Doctor from the Ministry of Health. Kettlewell calls the Doctor saying he has the robot and asks the Doctor to come to help him. As he puts the phone down Winters & Jellicoe arrive. Sarah and the newly promoted Warrant Officer Benton find the note the Doctor leaves. Entering Kettlewell's house the Doctor is attacked by the Robot who has been instructed to destroy him as an enemy of the human race.... 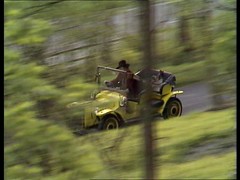 This episode I can feel elements of the Third Doctor coming through in Tom's performance and not just because he gets to drive Bessie for the first time. The "I'll talk to anyone" when he answers the phone is a direct lift from The Green Death. Given that it's the most recent thing for Tom to model his performance on and that writer Terrance Dicks has spent the last 5 years tidying up other people's scripts for Pertwee this shouldn't come as a surprise.

However there's two Fourth Doctor staples seen in the fight with the robot at the end: 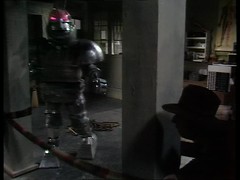 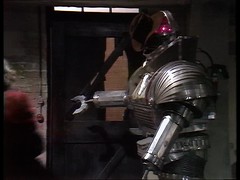 First he tries to trip it with his scarf then he blinds it with his hat. We'll see both of those tricks again!

There's some fab dialogue between the Doctor & Brigadier, as they discuss the thefts and try to untangle who could have done it, which is superb:

BRIGADIER: Well, Doctor, what are we dealing with? Invasion from outer space again?
DOCTOR: Why should some alien life form invade Earth just to steal a new weapon? If they were that advanced, they'd have weapons of their own. Ha. Rather a splendid paradox, eh, Brigadier? The only ones who could do it wouldn't need to.
BRIGADIER: Enemy agents?
DOCTOR: Well, they might steal the plans, but why steal the circuits and the generators? An enemy government would have those resources itself.
BRIGADIER: So where does that leave us?
DOCTOR: I think your enemies are home grown, Brigadier. People with access to technological information and a most unusual weapon. A weapon that walks and thinks. In a word, anthropomorphic.
BRIGADIER: Well, I suppose that narrows the field a bit. Do we know anything else about these people?
DOCTOR: Only that they're prepared to kill to protect themselves.

and then, interrupted by Sarah's arrival:

BRIGADIER: Where do I start looking for this precious conspiracy?
DOCTOR: Oh, it's surely not that difficult, Brigadier? Oh, thank you. There can't be many groups of people with the money and resources to design and build something like
SARAH: An enormous robot over seven feet tall!
DOCTOR: Yes, something like that. However did you guess?
SARAH: Guess? I've just seen it. I've been talking to it. 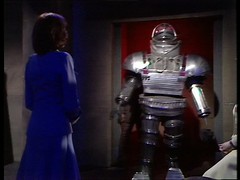 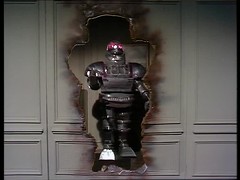 We get our first full look at the robot too and it looks fabulous! It's little wonder that Dennis Fisher included it in their toy range a few years later alongside a couple of other monsters from this season....

It's scenes with Sarah show off it's shear size well. Actress Elisabeth Sladen was 1m62cm (5'4") high so you can get some idea of how big it was! 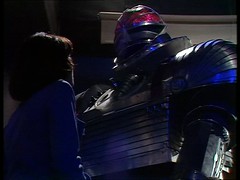 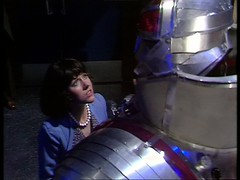 HILDA: Really, Miss Smith, this is absurd. I think you must be the sort of girl that gives motor cars pet names.

She really did have this habit giving names to everything in sight!

Though I'm afraid that this exchange between Sarah and the Brigadier, called a Swinger by Sarah last episode, did make me chuckle for reasons I'm sure the writer didn't intend:

BRIGADIER: Where you off to?
SARAH: Home to bed. Busy day tomorrow. I'm still a working girl, you know.

Speaking of working you can tell that Jellico and winters are proper scientists: both are wearing white coats as the modify the robot! 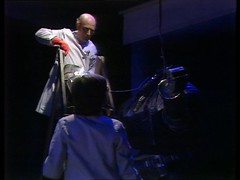 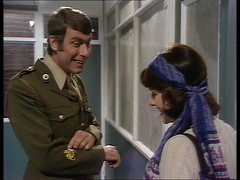 More work: Someone's had a promotion!

SARAH: Oo, I like that. What is it?
BENTON: That's promotion, Miss, to WO1.
SARAH: WO what?
BENTON: Warrant Officer. You see, technically speaking, the Brig should have a Major and a Captain under him. The UNIT budget won't run to it so they settled on promoting me.
SARAH: Congratulations. About time, too.
BENTON: Thank you.

And well deserved it is too. Actually It's Benton's second promotion since we met him first in 1968's The Invasion. He was a Corporal there but had been made up to Sergeant by the time of his second appearance in Ambassadors of Death. Five years later he receives another promotion to Warrant Office Class 1, The highest ranked Non Comissioned Officer in the British Army. That's actually a jump of three grades passing over both Staff Sergeant, the rank held by Arnold in Web of Fear, and Warrant Officer Class 2. 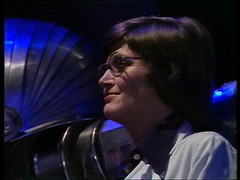 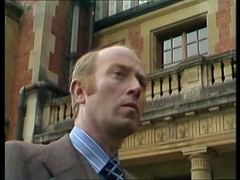 Leading the guest cast for this story is Patricia Maynard playing Hilda Winters. Despite a long career the only other thing I've seen her in is her appearance in The Sweeney episode Abduction, the 13th & final episode of the show's first series, where she plays Miss Doreen Alexander. I'm unsure if that's where she met Dennis Waterman or not but she became his second wife (his third wife shows up in Doctor Who much later) and is the mother of actress Hannah Waterman (Eastenders and New Tricks).

Alec Linstead, Arnold Jellicoe, was Unit technical Sgt. Osgood in The Dæmons. There's a character called Osgood in Unit in the New series and it looks highly likely that she is the original Osgood's daughter! Linstead later returns as Arthur Stegnos in Revelation of the Daleks. 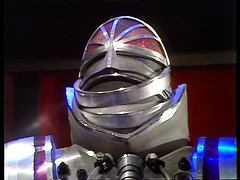 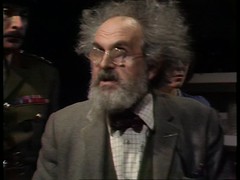 We've seen Michael Kilgarriff, inside the K1 Robot, before as the Cyber-Controller in The Tomb of the Cybermen and an Ogron in Frontier in Space. He'll make a return appearance as the Controller in Attack of the Cybermen. Meanwhile his creator, Professor Kettlewell, is played by Edward Burnham who was also has Cyberman connections appearing previously as Professor Watkins in The Invasion. Burnham is believed to be the second oldest surviving actor from then original series and celebrated his 98th Birthday last Monday!

Playing Short, the man who Sarah interviews at the Scientific Reform Society, is Timothy Craven who was a cell guard in Frontier in Space and Robinson in Invasion of the Dinosaurs. He'll be back as a Tesh in The Face of Evil Part Three. 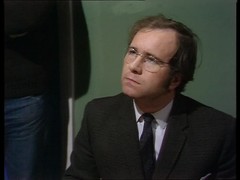 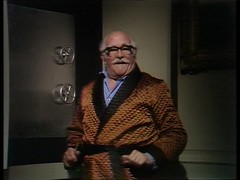 Playing, uncredited, the politician Joseph Chambers is Walter Goodman who been in the series several times without getting a credit. He was an extra in Spearhead from Space Episode 1 , the RAF VIP Auton in Spearhead from Space: Episode 4, a Villager in The Dæmons Episode Three and will return as the Android Farmer in The Android Invasion Part One. 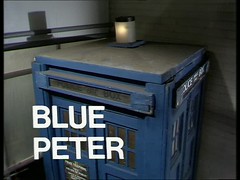 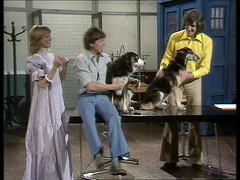 The filming of Robot was disrupted by a scene shifters' strike necessitating that the sets for the program be left up. Famously an episode of Blue Peter, featuring Peter Purves who played the First Doctor's companion Steven, was filmed in the Doctor Who lab set! The start of this episode is included on the Doctor Who: Robot DVD. 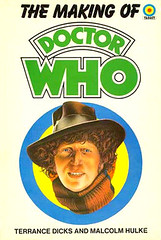 The last few minutes of this episode, roughly from 21:05 to 25:02, are covered quite extensively in the second edition of The Making of Doctor Who by Terrance Dicks & his old friend Malcolm Hulke. Hulke, with some assistance from Dicks, had written the first edition in 1972 for Piccolo Books in 1972 and featured some material on the making of The Sea Devils. With the Doctor who fictional licence now resting with Target and a new Doctor in place it was felt that it was time for an update. The scenes, featuring Sarah & Benton and The Doctor & the robot are shown progressing from writer's storyline through writer's story breakdown, rehearsal script and finally to an excerpt from Dicks' own Target novelisation of the story.

This is the first episode of Doctor Who broadcast in 1975 which bring me on to one of the main reasons I decided to look at these episode again. Due to a scheduling change for the series more episodes of Doctor Who are shown during this year than in any other year since the 1960. The series started just after Christmas as it had done for every year since the start of Jon Pertwee's reign in 1970. As was the custom for the first story of the season Robot was recorded at the end of the series 11th production block right after (and sometimes during) the production of Pertwee's final story Planet of Spiders but broadcast as the opening story of the 12th season. The 12th production block opened with the all location Sontaran Experiment before returning to studio for The Ark in Space, Revenge of the Cybermen and Genesis of the Daleks in that order before recording Terror of the Zygons. However the BBC decided that they would like Doctor Who to, in future, start from it's more traditional 60s start time of early Autumn so the 12th season was cut short at 20 episodes which made it the shortest season so far: the standard length the last few years had been, and would continue to be, 26 episodes. Terror of the Zygons was held back to start the 13th season and the 13th production block started with Pyramids of Mars then Planet of Evil and Android Invasion. These ended up being shown in a different order, with Android Invasion finishing before Christmas and a two week break for the festive scheduling.

So all in all 35 new episodes of Doctor Who were shown in 1975, many of them considered to be amongst the series very best!