Winters has Kettlewell start the countdown to missile launch, but while Winters is checking the food stores Sarah & Harry escape overpowering Jellicoe and allowing Kettlewell to pauses the sequence and the three of them to escape. Kettlewell is accidentally slain by his robot who, having killed it's creator, collapses. UNIT storm the bunker and the Doctor cancels the missile launch that Winters restarted. The recovered Robot takes Sarah hostage. Benton reminds the Doctor of Kettlewell's living metal virus and the Doctor & Harry search Kettlewell's lab for it. The robot restarts the missile sequence and announces it plans to build more machines like itself. The Doctor has the Brigadier get the world powers to operate their fail safe procedures forcing the count down to abort. The robot emerges from the Bunker and the Brigadier attacks it with the Disintigrator gun. However the robot absorbs the energy and uses it to grow to giant size. It places Sarah on the roof of the Thinktank building then attacks the UNIT troops. The Doctor & Harry arrive with the metal eating virus which the Doctor throws over the robot causing it to shrink, rust and disintegrate. Sarah is sad following the robot's death, but the Doctor persuades her to come for another trip in the Tardis but as they're about to leave Harry enters the lab. He doubts the Doctor's claims about the Tardis and is tempted inside.....

You can't really go wrong with a countdown to add a little tension to a story but stopping it and then restarting it TWICE ? That's a little much. 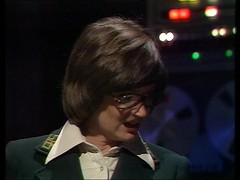 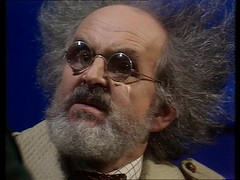 Kettlewell seems genuinely horrified that winters plans to go through with her plan. Expecting them to surrender when their bluff was called does seem a little naive. Mind you there's signs Winters hasn't thought everything through either

HILDA: What about food and water? How long can we hold out if the worst happens?
JELLICOE: I'm not really sure.
HILDA: Then you should be. Take me to the food storage. We must make a proper check. Keep your eye on our friends outside, Professor.

What on earth is Winters doing checking their food stores five minutes before the start of a nuclear war? It's a bit late then to go nipping down to Sainsburys to stock up so I can only assume she's got OCD of the highest order!

You actually feel as if the Brigadier has a reasonable number of men in this episode as there's lots of UNIT troops on display here when attacking the robot. In amongst them is Ray Knight, possibly the soldier the robot encounters in the Bunker, making his uncredited Who début before returning as the Sorenson Monster in Planet of Evil Part Four, a Coven Member in Image of the Fendahl Part Three & Four, a Mentiad in The Pirate Planet Parts One, Three and Four, Lexa's Deon in Meglos Part One, the Policeman with Bike in Logopolis Part One, a Trion in Planet of Fire Part Four and a Member of Giltiz's Crew in Dragonfire Parts One and Two. He's got Blake's 7 on his CV as a Federation Trooper Countdown, a Rebel in the superb Rumours of Death and a Federation Trooper in Warlord. Neither program ever credits him! 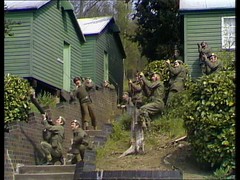 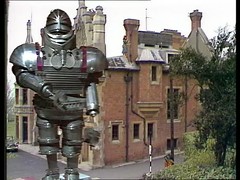 When the Robot grows to giant size, and plonks Sarah on a nearby roof, the episode's King Kong roots come to light. It's not clear if writer Terrance Dicks, writing his first solo Doctor Who script, or new script editor Robert Holmes came up with this element but Holmes obviously liked it because he spends a good proportion of the next few years, once he's cleared the backlog of scripts commissioned by Barry Letts & Terrance Dicks, doing homages to various old horror films.

Of course Doctor Who doing giant things has been a staple of the program for many years with Planet of the Giants, where the Tardis crew are shrunk, The Web Planet, insect people, Macra Terror, giant crabs and The Green Death, giant maggots & flies just a few examples.

Another old classic makes an appearance as the robot slays Kettlewell:

ROBOT: I have killed the one who created me.

Then when looking for the Robot the Doctor points out a flaw in their plan:

DOCTOR: There is just one teeny weeny little thing.
BRIGADIER: What's that?
DOCTOR: Something else you haven't thought of. What are we going to do with it when we find it?
BRIGADIER: Yes. You know, just once I'd like to meet an alien menace that wasn't immune to bullets.

The soloution is provided onscreen by Mr Benton, who obviously was listening carefully in the previous episode, and by Terrance Dicks raiding the Third Doctor's back catalogue one more time: The scene of the Doctor slopping the virus from a bucket in the back of Bessie is very similar to Benton throwing the fungus at the Maggots, again from the back of Bessie, in the Green Death. 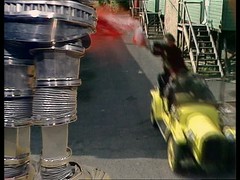 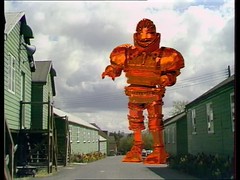 And a huge cheer please for the début of yet another Fourth Doctor staple towards the end of the episode: 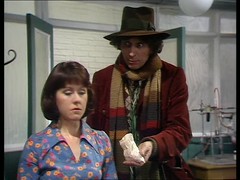 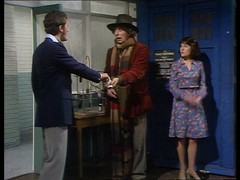 For the record Sarah is the first person he offers a Jelly Baby to followed by Harry in a fab routine with Harry being tricked into the Tardis to round off the whole story:

HARRY: Hello. Well, what are you two up to now, eh?
DOCTOR: We're just going on a little trip. Would you like a jelly baby?
HARRY: Little trip? What, in that old police box?
DOCTOR: Yes, as a matter of fact, in that old police box.
HARRY: Oh, come along now, Doctor. We're both reasonable men. Now, we both know that police boxes don't go careering around all over the place.
DOCTOR: Do we?
HARRY: Of course we do. The whole idea's absurd.
DOCTOR: Is it? You wouldn't like to step inside a moment? Just to demonstrate that it is all an illusion.
HARRY: Well, if you think it'll do any good.
DOCTOR: Oh, yes, it'll make me feel a lot better.
SARAH: Doctor.
DOCTOR: In you go.
HARRY: Right-o..... Oh, I say!

Which leaves the Brigadier, seaking the Doctor to force him to attend a number of celebratory function, absoloutely exasperated at yet another absence from his friend.

Scarf, Hat, Jelly Babies, voice, wild staring eyes. All present and correct. We're all set up and good to go for the next Seven years. As an introductory story Robot does it's job: here's the new Doctor but look there's lots of old and familiar things round him, so that's OK, it's still the same show and I say that new chap is really rather good isn't he?

The end of Robot sees the final regular appearance of Bessie, the Doctor's yellow Edwardian roadster used on Earth throughout the Third Doctor's era. It'll be back though, with the Third Doctor in Five Doctors before making it's last appearance in Battlefield. 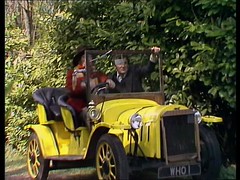 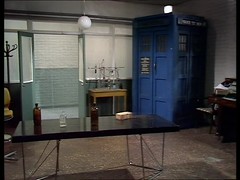 It's also the last appearance of the Unit Lab. Numerous labs have been seen since the Doctor's arrival on Earth in Spearhead from Space but this one, which made it's début in The Three Doctors before returning in The Green Death & Planet of Spiders is probably the most commonly shown. UNIT HQ appears again in Terror of the Zygons but it's just an office/radio room which we see then.

Robot is also the start of a four season long package of stories which was syndicated to television stations in the USA. Although Doctor Who had been shown previously these stories, frequently edited together to form compilations, were repeated an nauseum and were what really cracked the US for the show. Even more than the British the American image of Doctor Who is scarf wearing & jelly baby eating!

Robot is the last story produced by Barry Letts. As well as returning to directing, helming Android Invasion, he became producer for the Sunday evening Classic Serial and almost immediately roped Terrance Dicks into help first as his script editor and then as his replacement! He executive produced Doctor who season 18 before writing a number of books and radio plays about Doctor Who as well as contributing to a large number of DVD commentaries. His book Who And Me is essential reading to anyone interested in the earlier half of the Pertwee era. It's a shame a sequel covering the later years was never forthcoming: I hope that one day Terrance Dicks might be persuaded to write a book covering his time on the show and covering this portion. Having fought cancer for a time and been recently widowed Barry Letts died on 9 October 2009 aged 84.

Terrance Dicks novelised his script for Robot, with the name being modified to the more dramatic sounding The Giant Robot. It was the first Target Book I ever read, being picked off the paperback shelf in my local library at around the point I first saw Logopolis in 1981. In retrospect it probably has a lot to answer for as the books played a vital part in cementing me as a Doctor Who fan and in the process encouraged a love of reading in me. I have a lot to thank and blame in for and one day I'd like to meet him and tell him just that! For many years Giant Robot only existed in paperback, a hardback edition not being released until 1986. A junior edition of Giant Robot, one of only two junior Doctor Who books, was released in 1980. Robot was released on video in January 1992 alongside Caves of Androzani, the Fifth Doctor's final story. BBC Video had obviously gone regeneration crazy because two months later they released Logopolis & Castrovalva, the Fourth & Fifth Doctors last & first stories respectively, and then in May 1992 released The Twin Dilemma as a Woolworths exclusive. Robot was released on DVD on 4th June 2007.