"Good evening, everyone. Now please, stay calm. Everyone keep your seat. Now then, what can I do to entertain you till my friend the Brigadier arrives? A little song? A little dance, perhaps? Not just a little dance? Anyone for cards?"

The Doctor is saved by Sarah, who the robot trusts, and Benton who drives the robot off with a machine gun. UNIT troops attempt to contain it but it escapes. They find Kettlewell in the house and bring him to UNIT HQ where he explains the robot is made of a living metal that can grow and that he has a "virus" that can break metal down into a recyclable material. Sarah talks the professor into taking her to a Scientific Reform Society Meeting. The Brigadier admits that Chambers was holding the nuclear codes for a number of countries and that was what was stolen from his house. The holders would be able to set off every atomic missile in the world. The Doctor is angry when he finds out Sarah went with Kettlewell. At the meeting Winters tells the SRS members their scheme is coming to fruition and introduces Kettlewell to the stage with his robot. The Doctor disrupts the meeting but is restrained. The Brigadier raids the meeting but Winters, Jellicoe, Kettlewell and the robot escape with Sarah as a prisoner. Harry is taken hostage at Thinktank. The Brigadier locates Thinktank's bunker but they find it defended by automated machine gun nests. Winters demands that the Brigadier surrender. Harry & Sarah are held prisoner by the robot. Troops deal with the Machine Gun while the Doctor detonates landmines enabling them to approach the bunker where the Doctor starts to open the doors. Winters has Kettlewell start to program the destructor codes. The doors to the bunker open revealing the robot armed with the disintegrator gun, which destroys the tank the Brigadier sends against it.

Tom's great throughout, especially during the sequence where he tries to distract the crowd at the scientific reform society gathering. We get a number of first for him again:

There's the début of another Fourth Doctor staple: the Doctor emptying his pockets and all sorts of junk coming out. 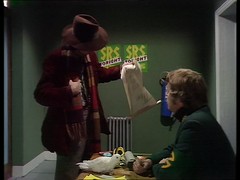 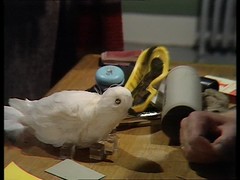 DOCTOR: Where is that pass? Freedom to the city of Skaro? No. Pilot's licence for the Mars Venus rocket run. Galactic passport. Do you travel much? Honorary member of the Alpha Centauri Table Tennis Club. Very tricky opponents, those chaps. Six arms, and of course six bats. It really keeps you on your toes.

The line about the Doctor being "an honorary member of the Alpha Centauri Table tennis club" is nice reference to the occasional third Doctor character Alpha Centauri, one of the Galactic Federation's representatives to the planet Peladon. This is confirmed by the Doctor's remark about "6 arms and 6 bats" clearly describing the creature seen on screen. Alpha Centauri first appeared in The Curse of Peladon, in 1972, before returning in 1974's The Monster of Peladon, the last but one story which was the penultimate Third Doctor tale. 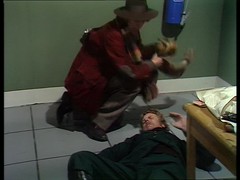 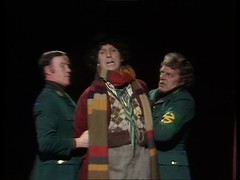 The guard on the doors at the scientific reform society who the Doctor tips his pockets out for is played by regular stuntman Terry Walsh who had doubled for the Third Doctor John Pertwee and would do again for Tom Baker. The reason why a stuntman is cast is quickly revealed as he gets the Doctor's scarf pulled out from under him before jumping at an obviously bending down Doctor on stage and finally manhandling him!

There's also the Fourth Doctor's first use of the sonic screw driver. Initially he uses it to blow up mines, as in the Sea Devils, although at this point it looks more like it's original form of a flashlight pen before he attaches the more traditional top to cut threw the door lock. 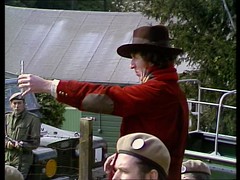 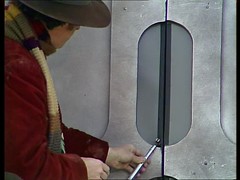 The episode starts with a substantial reprise from the previous one, from the point where the Doctor enters Kettlewell's home meaning that we don't get any new material till 2m45s into the episode!

BRIGADIER: A few months ago, the superpowers, Russia, America and China, decided upon a plan to ensure peace. All three powers have hidden atomic missile sites. All three agreed to give details of those sites plus full operational instructions to another neutral country. In the event of trouble, that country could publish everyone's secrets and so cool things down. Well, naturally enough, the only country that could be trusted with such a role was Great Britain.
DOCTOR: Well, naturally, I mean, the rest were all foreigners.
BRIGADIER: Well, exactly. The destructor codes for firing these missiles were kept in Chambers' house in a special Dynastreem safe. The robot killed Chambers, blasted the safe open with a disintegrator gun and took the codes.
BENTON: So what can they do with them now that they've got them?
BRIGADIER: They could set off every atomic missile in the world, Mister Benton.
DOCTOR: Yes, and start a nuclear holocaust that would turn this little planet of yours into a radioactive cinder suspended in space.
BENTON: You mean he could use the information to blackmail the world? Do things our way or we light the blue touch paper.
DOCTOR: I'm afraid so.

The idea that any one country, let alone person, should be holding the codes for all the world's nuclear weapons is perhaps a conceit too far on the part of the writer and The Brigadier's "and naturally there was only one country that could be trusted" puts the seal on it! 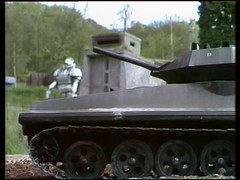 There's some very dodgy effects in this episode: my word that's a rubbish cardboard bunker that gets blown up by a grenade. And as for the Action Man tank that appears at the end of the episode.... deary me.

BRIGADIER: Well, I've brought along something that will deal with it.
DOCTOR: I very much doubt it, Brigadier.

I'm with the Doctor on this one.

And it very much is an Action Man tank - google Action Man Scorpion Tank if you don't believe me!

It's not helped by a lot of the scenes involving gunfire being afflicted by microphony creating a pattern of horizontal lines across the screen.

The major location in this story is Wood Norton Hall in Evesham, Worcestershire. It previously appeared, both inside and out, in the Third Doctor's début Spearhead from Space. This time the crew were forbidden from filming inside by the official secrets act: The site was a designated emergency broadcasting centre in the event of nuclear war. Why they were allowed in 1969 and not in 1974 remains a mystery. This is the first Doctor Who story to have it's location work recorded using Outside Broadcast video rather than film producing a more consistent look with the studio filmed footage.

This story sees the début of another new opening title sequence, now featuring Tom Baker's face and for the first time the Tardis. It's broadly similar to the title sequence used for the Third Doctor's last season: both use silhouettes and tunnels, albeit different ones, but both use the same logo and ending. As someone who gre up with the Tom Baker titles I'm obviously very fond of them but I do like the start of the Pertwee sequence with the increasing number of streaks forming a circular tunnel. But I'm not fond of the silhouettes, certainly not Pertwee's body and although the Police Box shape is better, the first time The Tardis has been in the titles, the round topped lamp on top of the box has always annoyed me. 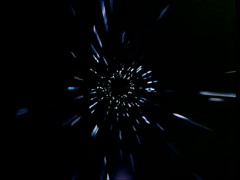 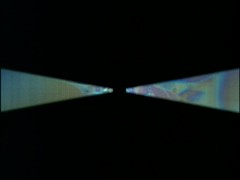 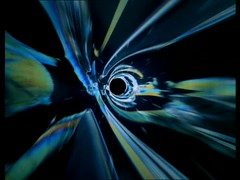 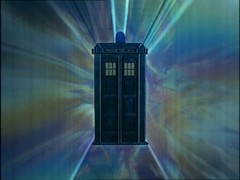 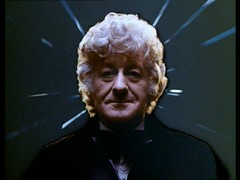 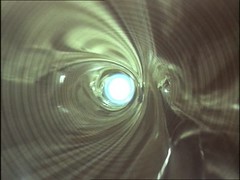 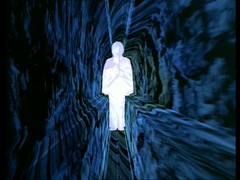 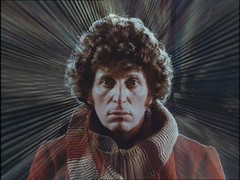 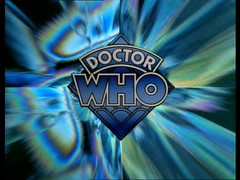 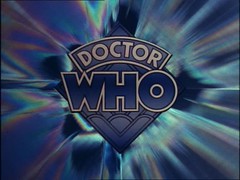 While Pertwee's last season play the end credits over a receding diamond shaped tunnel, the Tom Baker titles feature a round silver tunnel approaching us. These two new title sequences would be used for the next SIX years making them the longest used set of Doctor Who titles. The Doctor Who: Robot DVD has a feature on how all four title sequences to date were achieved. 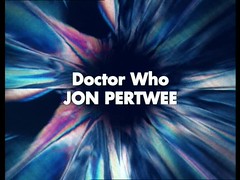 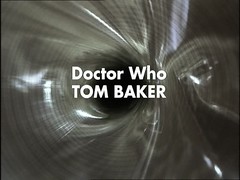 And speaking of the end titles, there's an oddity to be found in these: writer Terrance Dicks gets a credit at the end of the episode as well as the start! 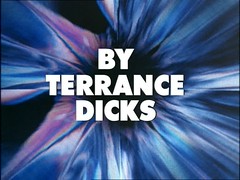 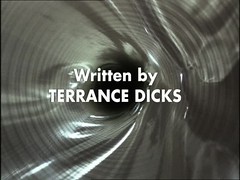 Note also how the end of the new titles, with the writer's credit, is the same as the old closing title sequence!

I've seen Robot a fair few times now over the years but one that sticks in my mind was UK Gold showing it the morning of my 30th birthday morning. My wife was making us breakfast and really laying into the effects, especially the tank, as she cooked the bacon sandwiches!