404 Terror of the Zygons: Part Three

"We have reason to believe there's something rather unusual in the Loch." 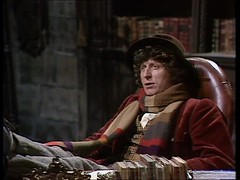 Harry lunges at the Skarasen's controls in the Zygon ship, allowing the Doctor to escape. Benton searches the pub for surveillance devices so the Broton orders the Zygons to have the monitor link, embedded in the stag's head hanging on the wall, removed. The Doctor, Brigadier & Sarah visit the Duke of Forgill and ask to depth charge the loch to destroy the monster. The Duke dismisses their suggestions. Angus, the pub landlord, discovers the bug but is disturbed by Sister Lamont from the infirmary who turns into a Zygon and kills him, removing the bug. Benton hears Angus' screams and with some men pursues the Zygon into the woods. The Doctor thinks that the Oil Company have built their base on the monster's root to the sea. They're called to the forest by Benton, but Sarah stays to research the monster in the Duke's library. The Zygon returns to it's human form, attacking a UNIT soldier and steeling his jeep. Seeing the stag's head, now missing it's eye, The Doctor deduces that the Duke, who brought the head to the pub, must be a Zygon. Sarah discovers a secret passage in the library which leads down and into the Zygon spaceship. The Duke discovers she has found the passage and left the door open. Sister Lamont arrives at the hall and Broton, disguised as the Duke orders her taken to the ship. Sarah finds Harry and, once she's sure he's him and not a Zygon, she releases him. They find the Doctor & Brigadier looking for them: The Doctor goes into the passage but is captured by the Zygons who announce to the other that they are leaving and going to take over the world. The Brigadier depth charges the lake to force the Zygon ship to the surface. The Zygon ship emerges from the water and flies off in a southerly direction. 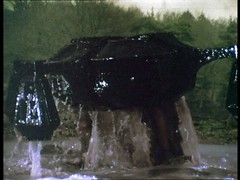 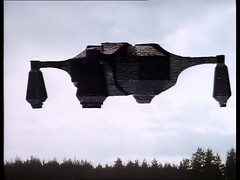 That was a cracking episode: Another Zygon name revealed: Odda, the one impersonating Sister Lamont. As it is the Zygons' plan, beyond conquer the Earth, is still not clear. I'm not writing a lot in praise of these episodes but my goodness they are good stuff and well done. Sadly after praising an effect in the last episode I now find that the shots of the Skarasen moving past the Doctor in this one aren't that good. 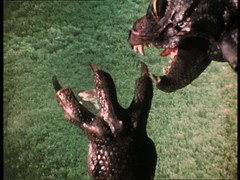 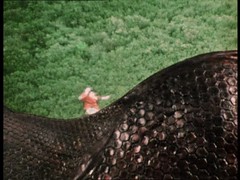 Against that, however, we have two very good effects: The Zygon ship launching, above, and Sister Lamont's transformation into Odda, bellow: 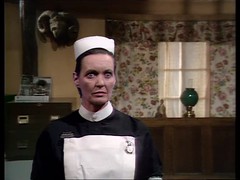 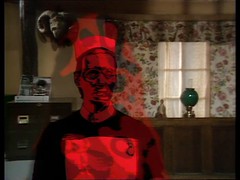 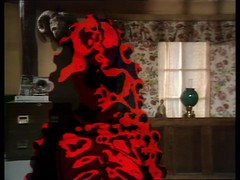 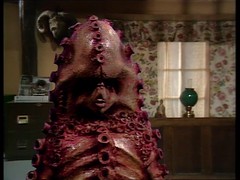 There's some great lighting too as Sarah descends from Forgill Castle into the Zygons' ship, always nice to see a dark set rather than something brightly lit. 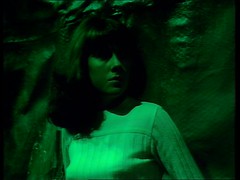 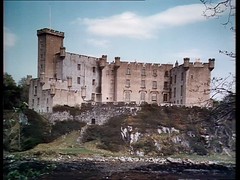 Forgill Castle is represented by a still shot of Dunvegan Castle on the Isle of Skye. But note the drop from the castle down to what would be the loch. There's no way the tunnel Sarah's going down is sloped enough!

In the middle of the episode there's a fabulous exchange between The Doctor, Brigadier and the disbelieving Duke of Forgill:

BRIGADIER: We have reason to believe there's something rather unusual in the Loch.
FORGILL: Loch Ness?
BRIGADIER: Yes, sir.
FORGILL: Don't tell me you've found the monster.
SARAH: As it happens, your Grace, that's just what we do mean.
FORGILL: I do believe you're serious.
DOCTOR: We are. Very. 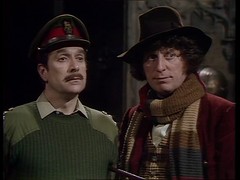 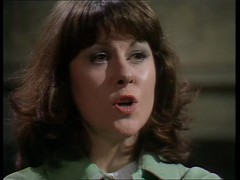 FORGILL: Depth charges?
BRIGADIER: With your Grace's permission, as you own part of the shoreline.
FORGILL: You can't explode depth charges in Loch Ness.
BRIGADIER: I'm afraid it's the only answer, sir. This creature must be destroyed.
FORGILL: Doctor, are you a party to this militaristic nonsense?
DOCTOR: I'm not a party to any kind of nonsense, your Grace.
FORGILL: There's no proof. There never has been any actual proof that the monster exists.
SARAH: Of course it exists. It chased the Doctor half across Tullock Moor.
BRIGADIER: And we believe it's been destroying these oil rigs.
FORGILL: Loch Ness is seven miles from the coast. Are you suggesting it walks overland without being seen?
DOCTOR: An underground river.
FORGILL: No, Doctor. Loch Ness is fifty feet above sea level.
DOCTOR: I know, your Grace. I know. But there's a subterranean channel leading from Loch Ness to the Devil's Punchbowl, a small loch near the village. It's near the sea and would make a useful back door for the monster, wouldn't you say? 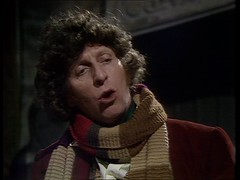 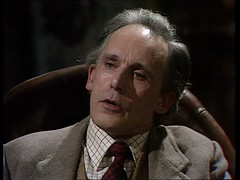 FORGILL: I've never heard such nonsense. Are you seriously suggesting that the creature commutes between here and the North Sea whenever it feels like it?
DOCTOR: Whenever it's ordered to. We know it's controlled by a signal system.
FORGILL: Controlled? By whom?
DOCTOR: Aliens.
FORGILL: Whom?
BRIGADIER: I know it sounds improbable, sir, but we do have evidence.
FORGILL: Improbable? It's utterly, totally absurd. Aliens?
BRIGADIER: I know exactly how you feel, sir. Before I joined UNIT, I was highly sceptical about these things.
FORGILL: You're all utterly unhinged. Must be. Aliens with wireless sets?
DOCTOR: Well, it takes all sorts to make a galaxy, your Grace.

UNIT doesn't often have to explain itself to members of the public and it's a fabulous exchange between them and the disbelieving Duke, made all the better for it not being the actual Duke, but a Zygon imposter. The revelation that the Duke *IS* a Zygon has been hinted at in the previous episodes but actually is very underplayed here with him assisting the Caber with the injured Nurse Lamont both of whom we know are Zygons. I wonder if there might have been a more dramatic way to reveal him? 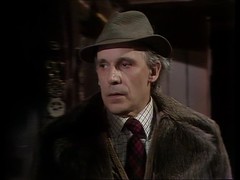 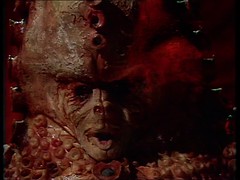 Lead guest actor John Woodnutt plays both his grace, the Duke of Forgill and the Zygon Warlord Broton. He's credited throughout the story as the Duke of Forgill, even on episode 2 where the Duke doesn't appear but Broton does, to hide that Broton is the Duke. Woodnutt was previously George Hibbert in Spearhead from Space and the Draconian Emperor in Frontier in Space. He'll return as Seron in The Keeper of Traken. Other credits include The Thin Man in Look and Read: The Boy From Space and Out of the Unknown: The Little Black Bag as Kelland. Director Douglas Camfield used him three times in 1975: first in the Public Eye episode What's Become of Us? where he played Tom Hooper, then Terror of the Zygons before turning up in The Sweeney Stay Lucky as Dr. Clare. They'll work together again in 1979 on the Shoestring episode The Link-Up where Woodnutt plays Dr. Morris. John Woodnutt had also appeared in a previous script by writer Robert Banks-Stewart when he was in The Avengers episode Quick-Quick Slow Death as Captain Noble. Later roles included Merlin & Mogdred in the adventure game program Knightmare and Sir Watkyn Bassett in the Stephen Fry & Hugh Laurie Jeeves and Wooster. He died on January 2, 2006 in the actor's retirement home Denville Hall.

Ronald Gough had previously been a Technician in Doctor Who and the Silurians episodes 1 & 2 and an Extra in Invasion of the Dinosaurs part one. Keith Ashley has a longer association with the show: he was an Extra in The Savages episode 1, a Firing Squad Member in The War Games episode one, a Technician in Doctor Who and the Silurians episodes 1, 2, 6 & 7, Villager in The Dæmons episode three, and an Extra in Planet of the Spiders part one. His first credited role in Doctor Who came relatively recently as a Dalek Operator in Genesis of the Daleks parts three to six. He'll return in The Seeds of Doom, another Camfield directed story, part five as Sir Colin's Aide and as an uncredited Brother in The Masque of Mandragora parts one & three.

Doctor Who is known for striking fear and terror into it's junior viewers so it's little surprise that the word TERROR has popped up in a few story titles:

There's a FEAR story on the horizon shortly so we'll list the other FEAR titles then.