"We lost it. The vein vanished. This damned planet took it back. It's alive, you know, Baldwin. It watches every move we make. I won't be beaten again."

On the planet Zeta-Minor Braun plants a grave marker for a fallen comrades while another two men gather samples in a cave. Braun radios to call them back to base before night falls but Professor Sorenson wants to stay to pursue a rich seam. Baldwin leaves Sorenson behind but back at their base a creature comes for Braun who disintegrates. Baldwin too is caught and killed when he returns to base. The Doctor & Sarah come out of the Time Vortex 30,000 years too late and hearing the distress call materialise in the jungles of Zeta-Minor. A spaceship approaches Zeta-Minor where Vishinsky describes it as the last planet in the known universe. Controller Salamar tells Vishinsky to head up the landing party even though they don't have enough fuel to survey the planet first. The Doctor & Sarah find the graves and the seemingly deserted base. The Doctor wonders where they are theorising that the expedition was killed before help arrived. Sarah returns to the Tardis for some equipment and while she is gone the Doctor finds Baldwin's body. As Sarah enters the Tardis, it's found by the landing party. They have the Tardis transferred to the probe by transmat. The landing party find Sorenson who tells them he has made a vital discovery. Vishinsky quizzes him on the expedition's losses but he is evasive. They find the Doctor at the base. Sarah exits the Tardis finding herself on the Morestran spaceship and a prisoner of Salamar who interrogates her. In the cave where the samples were found a sound comes from the black pit in the middle. Salamar opts to land on the planet. Sorenson relates the story of how the members of his expedition were killed. Salamar, convinced the Doctor is responsible, has him taken for interrogation. But once reunited with Sarah they escape encountering an all but invisible monster surrounded by red energy.... 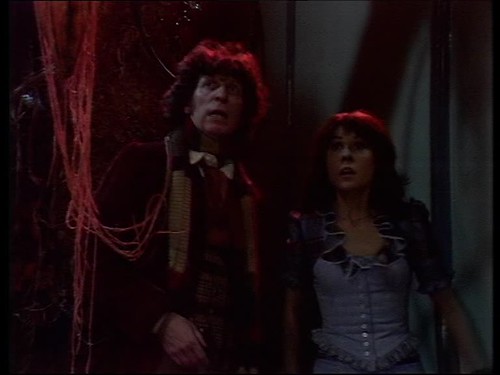 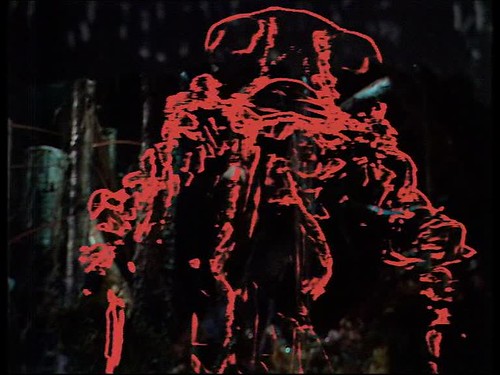 Essentially at this stage the Doctor is the number one suspect in the eyes of Salamar, the commander of the Morestran forces. It's only at the end that the creature stands revealed before us and even then we have no idea what it is!

Confession time: I've never been a huge Planet of Evil fan, but I'll try to approach the story with an open mind. This episode wasn't bad at all, but the base and the jungle reminded me somewhat of Planet of the Daleks, a previous story directed by David Maloney: in particular the door to the base not looking unlike the back of the Thal shuttle. 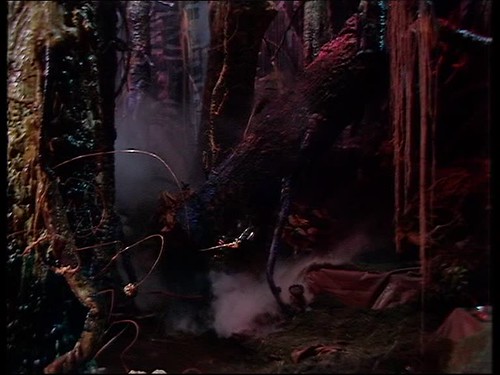 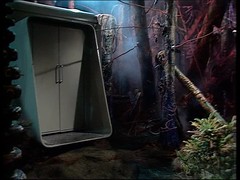 The opening of the story presents us with a graveyard outside the base: this is a mission that obviously hasn't gone well, as Sorenson later relates:

SORENSON: We'd only been working a few weeks when Lorenzo went. After that, Gura and then Summers. And then for a while, it stopped. We thought that we were safe, that whatever it was had decided to leave us in peace, but it wasn't to be.
VISHINSKY: The killings always happened at night?
SORENSON: Oh, yes. The nights are the worst.

In addition to Lorenzo, Gura & Summers, we see Lumb's grave marker being planted here. There appears to be three other grave markers at the burial site, one of which, on the right, appears to be the aforementioned Summers. We then see Baldwin and Braun meet their ends which indicates a party of seven including Sorenson, the sole survivor. 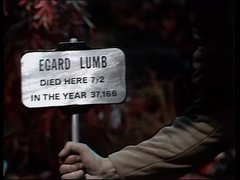 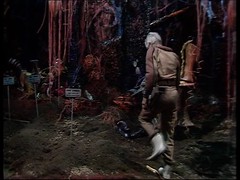 It's Nearly 6 minutes into the episode before the Doctor and Sarah appear but when they do we're given our first look at the inside of the Tardis for quite some time. We haven't seen the Tardis interior since Death to the Daleks which means it was missing for all of season 12. It's not the first time the interior has skipped an entire season though: we didn't get to see it at all during season 7, Jon Pertwee's first, either! 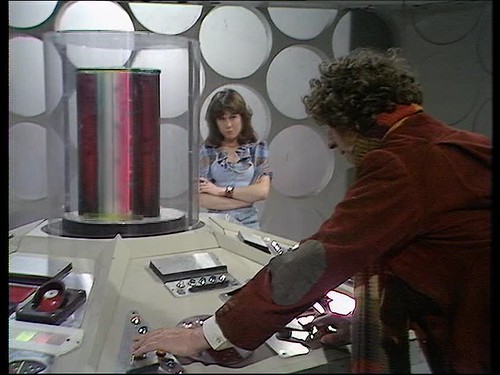 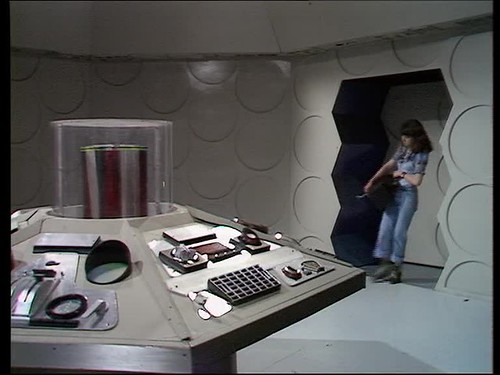 SARAH: How long have we been travelling?
DOCTOR: Hmm? What did you say?
SARAH: You promised me we'd be back in London five minutes before leaving Loch Ness.
DOCTOR: Did I?

This exchange indicates the Tardis has been travelling for some time. It's certainly long enough for Sarah to change from the pale green clothes she was wearing at the end of Terror of the Zygons, but it's safe to assume this is pretty soon after. 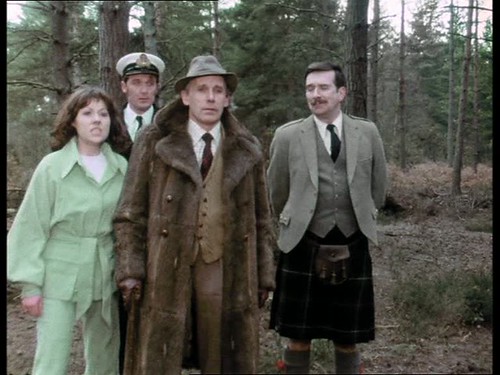 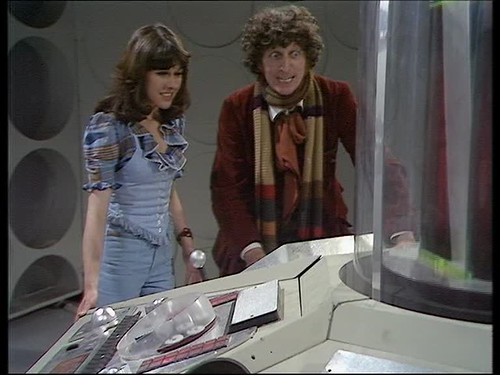 SARAH: So, what are we going to do?
DOCTOR: So, let's go back to the Tardis and fetch my spectromixer, and I'll fix our position by that star. Then I'll repair this power cell and try and make contact.
SARAH: Well, you can get on with that now. I'll fetch the spectromixer.
DOCTOR: Good idea. Would you do that?
SARAH: Why not? I know the way.
DOCTOR: Good thinking. What are you waiting for?
SARAH: The key.

Sarah should have been with the Doctor long enough to know that splitting up is always a very bad idea. And so it proves here: she gets locked in the Tardis and then captured by Salamar and his crew!

SALAMAR: Do you have any idea where Zeta Minor is situated?
SARAH: No, not exactly.
SALAMAR: It's beyond Cygnus A. It's as distant again from Ortoro galaxy as that galaxy is from the Anterades.

SALAMAR: It's on the very edge of the known universe. You just happened to be passing when you received this distress call?
SARAH: Well, no, no, no, we were on our way to London, to Earth.

Much more like it. Thank you Salamar, we know where we are now!

Speaking of Salamar his ship looks rather familiar. Turn it the other way up and .... 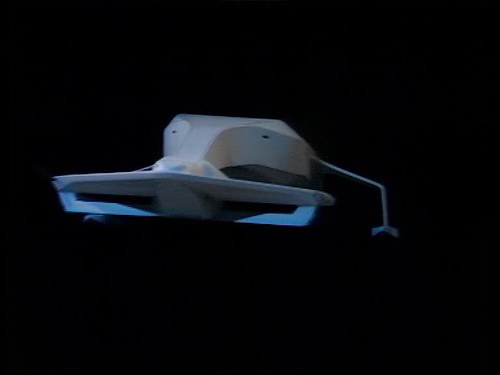 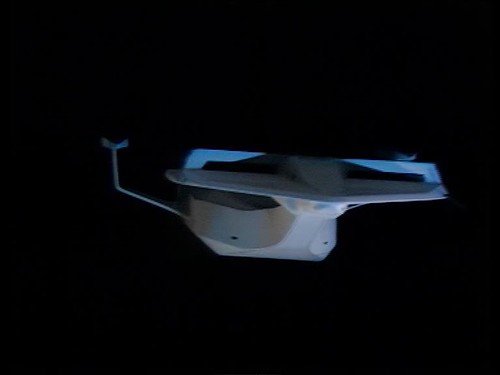 .... essentially it's Star Trek's USS Enterprise. In fact the design here is quite close to that used for the Galaxy and Ambassador class vessels seen in Star Trek: The Next Generation.

"Character Development" is a high priority in this story so let's get most of the cast out the way before they start leaving us as the story progresses. Lead guest is Frederick Jaeger playing Professor Sorenson. Previously he was Jano in The Savages and will return as Professor Marius in The Invisible Enemy. 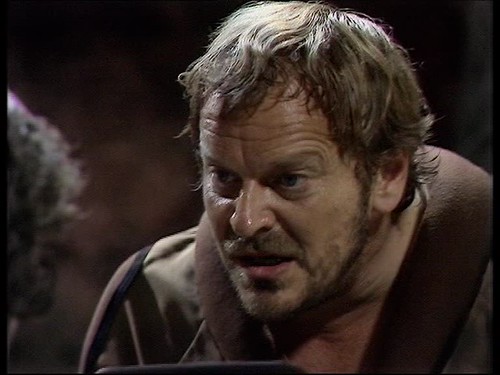 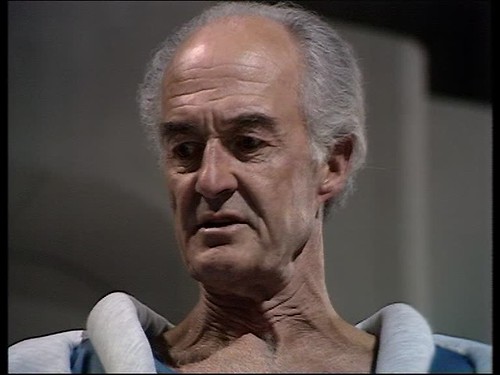 Also in The Savages, as Chal, was Ewen Solon who plays Vishinsky in this story.

Salamar is played by Prentis Hancock, a veteran of the aforementioned Planet of the Daleks, where he was Vaber. He was also in Spearhead from Space as a reporter and returns in The Ribos Operation as the Shrieve Captain. We'll look at his most famous role outside of Doctor Who tomorrow. You can hear him interviewed in Toby Hadoke's Who's Round #129. 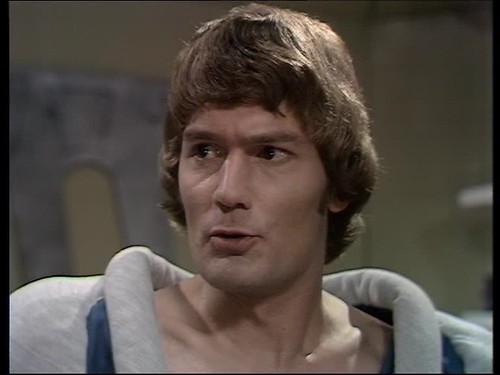 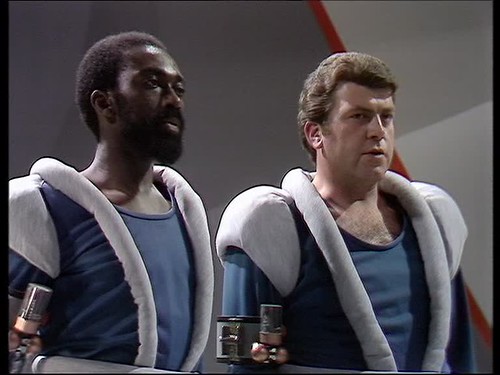 Louis Mahoney plays Ponti, returning to Doctor Who after being the newscaster in Frontier in Space. He also has a modern Doctor Who appearance to his name: he was the older Billy Shipton in Blink. He's got two appearances in The Professionals as a Doctor in both Black Out and the controversial and unbroadcast Klansmen.

Ponti's comrade De Haan is played by Graham Weston who was Russell in The War Games, a previous story directed by David Maloney. Also in the War Games was Tony McEwan, as a Redcoat, who here briefly plays Baldwin. 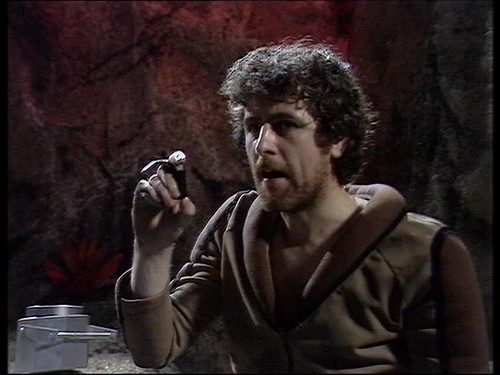 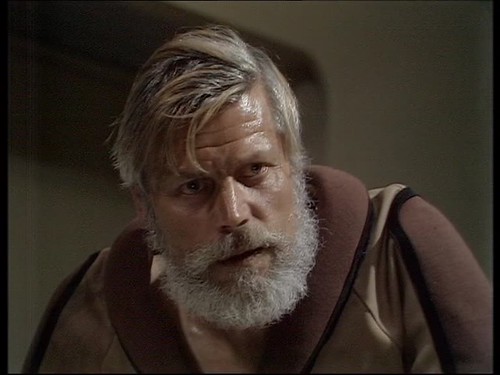 Also appearing briefly is Terence Brook as Braun. He'll return, uncredited, in The King's Demons: Part One as a Servant and Frontios: Part One as a Retrograde. He's also in the Blake's 7 episode Power as an Hommik Warrior.

Series regular stuntmen Max Faulkner & Terry Walsh both appear as Crew Members Crew Members. See blog entries passim for their credits! David Rolfe also appears as a Crew Member: he was an Exxilon in Death to the Daleks parts one to three and a Guard in The Monster of Peladon part one. He's back as a Guard in The Masque of Mandragora part one. Appearing as a Morestran, so probably yet another Crewmember, is Julian Hudson who was a Audience member / Meditator in Planet of the Spiders part one and an Extra in Genesis of the Daleks parts one and four. He's back as an Extra in The Invasion of Time part four and a Seabase Guard in Warriors of the Deep parts one to three.