"Didn't you learn anything? You're tampering with the balance of nature on this planet in ways you don't understand. It may already be too late!"

One of the spaceship crew, O'Hara, attacks the creature and is killed by it. Salamar and Vishinsky investigate a power fault when Ponti reports that they may be under attack and Vishinsky finds the prisoners gone. Salamar blames them for O'Hara's death. The Morestrans launch the occuloid tracker to find the Doctor. The Doctor & Sarah investigate the cave with the black pit where they believe the creature came from but they are found by the tracker and captured. Ponti falls into the pit and the Doctor warns them they are interfering with things on this planet that they don't understand. Sorenson & De Haan retrieve Sorenson's samples which he believe will give the Morestrans a new source of power. Salamar puts the Doctor on trial and refuses to believe the Doctor's explanation for the deaths. The Doctor tells them to leave Sorenson's samples behind or they will never leave the planet. The Doctor explains to Sarah that the Morestrans actions may put the whole universe at risk. The Doctor steals some of Sorenson's mineral samples as the ship starts it's launch sequence. The ship malfunctions as they start to take off and they see the creature approaching the ship. The Doctor & Sarah are brought to the bridge as the crew attack the creature. The Doctor advises them to link their forcefield to the atomic accelerator which repels the creature. The Doctor returns to the cave to communicate with the creature but is dragged into the black pit.

I'm experiencing similar feelings to this story that I had before: annoyance at Salamar and complete non engagement with the plot. The monster's there, it's reasonably obvious that the Doctor hasn't killed the people and Sorenson's a bit loopy and yet ..... Salamar doesn't seem to have two brain cells to rub together and Prentis Hancock is basically rehashing his performance as Vaber, from Planet of the Daleks, here. 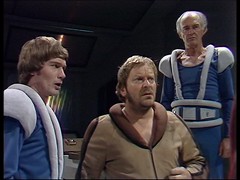 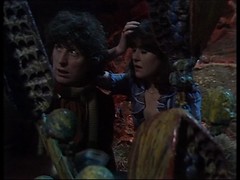 DOCTOR: Fortunately, time is on our side.
SARAH: Time?
DOCTOR: Yes. "Night's candles are burned out and jocund day stands tiptoe on the misty mountain top". Or something like that.
SARAH: Ah, you mean it's getting light.
DOCTOR: That's what Shakespeare meant.
SARAH: Doesn't it like daylight?
DOCTOR: That is the question.
SARAH: Oh, Doctor, where are you going?

In fact The Doctor quotes Shakespeare twice there. Romeo & Juliet, with the "Night's Candles" line while "That is the question" from Hamlet.

He then goes one better!

DOCTOR: I met him once, you know.
SARAH: Who?
DOCTOR: Shakespeare. Charming fellow. Dreadful actor.
SARAH: Perhaps that's why he took up writing.
DOCTOR: Perhaps it was.

Shakespeare joins a long list of historical figures the Doctor claims to have met but we're not 100% sure he has. We have seen Shakespeare though: he appeared in The Chase episode 1: The Executioners where he's played by Hugh Walters. Many years later we see the Tenth Doctor meet Shakespeare in The Shakespeare Code!

Like most actors Tom Baker must have done a bit of Shakespeare in his time and indeed David Weston, who was Nicholas Mussin in The Massacre and will be Biroc in Warrior's Gate, mentions appearing with him in a 1966 production of The Winter's Tale in his book Covering Shakespeare: An Actor's Saga of Near Misses and Dogged Endurance. It and it's predecessor Covering McKellen: An Understudy's Tale are both well worth a read and feature plenty of Doctor Who actors treading the boards in the Bard's plays. There's some evidence that that production of The Winter's Tale was filmed as I can find an IMDB entry for it!

Of course it's probably right the story should be throwing Shakespeare references around: The monster that we've seen, and indeed the whole serial, owe something of a debt to the 1956 film Forbidden Planet which in turn is heavily influenced by Shakespeare's The Tempest. 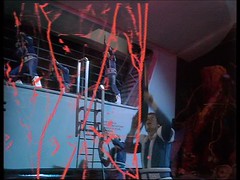 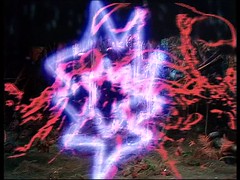 The monster is a nice effect, albeit a direct lift from Forbidden Planet. I like what we see as they are repelled by the ship's shield wall a decent attempt at showing something hitting an invisible barrier.

We get a good look at the monster as it rises from the pit at the end of the episode, but as the Doctor falls in the episode ends on a freeze frame, a rarity for Doctor Who, but one that director David Maloney has used in several of his stories. 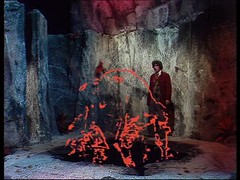 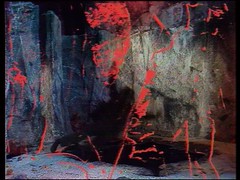 SALAMAR: You've seen the body?
SORENSON: All my party died the same way. A type of total dehydration.
SALAMAR: I have the bio-analysis here. All the organs are undamaged. No contusions or evidence of pressure. Complete extraction of bodily fluids from tissue.
VISHINSKY: We've no weapon in our technology that could produce such an effect.
SALAMAR: No, a heat weapon would have produced external injuries. All the indications are that some very rapid form of freeze-drying occurred.

Hmmmm. The body is a bit odd. When the victim dies, they vanish only for a dessicated corpse to appear again a little later!

Nice effect with the corpse though. Bet that got Mary Whitehouse going! 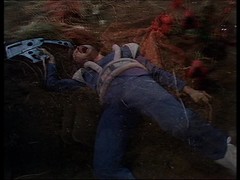 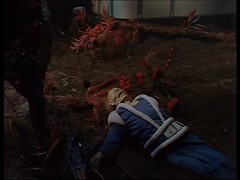 Perhaps they could have made more of an effort to pose the dessicated corpse in the same position the actor fell in too?

SORENSON: Isn't this irrelevant, Controller?
SALAMAR: Irrelevant?
SORENSON: I came to Zeta Minor to prove a theory that could save our civilisation. I've been successful. That's all that matters.
SALAMAR: Seven men have died at the hands of these aliens.

Now we had a go at a body count for Sorenson's party last episode and listed Lorenzo, Gura , Summers, Lumb, Baldwin and Braun. That makes six, confirming Sorenson as the only survivor of a party of seven. O'Hara from Salamar's team is the seventh victim.

The reason Sorenson's party is there and the purpose of their mission then stands revealed:

SORENSON: There is more at stake here than seven lives. Our solar system is dependant upon a dying sun. I've discovered a new and inexhaustible source of energy. Rock formations on the fringe of the universe.
MORELLI: Controller, the oculoid tracker has located the prisoners.
SALAMAR: Order out the pursuit party.
PONTI: Right, Controller.
SORENSON: You're wasting time. My mineral samples must be loaded aboard and we must prepare for immediate take off.
SALAMAR: I am well aware of your high position in the science authorities, Professor, but this is a military expedition with military objectives. The manual says hostile alien forces must be searched out and liquidated. That operation is now in hand.

Salamar is convinced he knows who is responsible and places the blame firmly at the Doctor's feet:

SALAMAR: Yesterday, you were found with the body of one of our scientists. Last night one of our guards died and you were seen kneeling over him. Can you explain this?
DOCTOR: We had nothing to do with those deaths. They were brought about by your intrusion. Listen, now listen to me, please. Here on Zeta Minor is the boundary between existence as you know it and the other universe, which you just don't understand.
VISHINSKY: Other universe?
DOCTOR: Yes. From the beginning of time, it has existed side by side with the known universe. Each is the antithesis of the other. You call it nothing, a word to cover ignorance, then centuries ago scientists invented another word for it. Antimatter, they called it.
SALAMAR: Nonsense. Clever deception to cover their real motives.
VISHINSKY: I don't think so. Let him finish.
DOCTOR: And you, by coming here, have crossed the boundary into that other universe to plunder it. Dangerous.
SORENSON: Salamar. My mineral samples are aboard. It is getting dark. Prepare for the return journey.
DOCTOR: Mineral samples? Sorenson, you can't take any part of this planet with you.
SORENSON: That was the purpose of my expedition.
DOCTOR: But you can't!
SALAMAR: Get them out of here. I'll deal with them later.
DOCTOR: Sorenson, if you don't listen to me, you'll never leave this planet.

While these episodes of Doctor Who were airing a new science fiction series was being broadcast directly opposite it by ITV, or was in some regions at least. Several years in development Space 1999 was seen as the other side's answer to Doctor Who. Set on a Moonbase, an element recycled from UFO which Space 1999 is very roughly a sequel too, the Moon is blasted out of orbit in episode 1 and the series tracks it's voyage round the universe and the crew's struggle for survival. In front of the camera Doctor Who actors Prentis Hancock (Salamar in Planet of Evil) and Ziena Merton (Ping Cho in Marco Polo) feature in a regular cast headed by American stars Martin Landau and Barbara Bain. Guest stars include Second Doctor Patrick Troughton, Julian Glover (King Richard in the Crusade & Scaroth in City of Death) and Brian Blessed (Yrcannos in Trial of a Timelord). Johnny Byrne, future Doctor who writer of Keeper of Traken, Arc of Infinity & Warriors of the Deep, writes for the show during series 1.

However Space 1999 was seen as having problems and a major revamp preceded series two. In came experienced American producer Fred Freiberger. Out went Prentis Hancock and several other members of the cast including respected actor Barry Morse replaced by, amongst others, the future Countess Scarlioni (City of Death) Catherine Schell. Many new writers were recruited including former Doctor Who script editor Terrance Dicks and future Doctor Who writers Pip & Jane Baker.

There are two sorts of Space 1999: Good Space 1999 and Bad Space 1999. These roughly equate to the first series and the second series. It must be a coincidence that the "bad" second year was over seen by the man who produced the inferior third series of Star Trek and had a script by the writers of Time & The Rani isn't it?

Space 1999 series 1 is available on Blu-ray and DVD. In my opinion it's well worth your time & money. Episodes such as Breakaway, Black Sun, Earthbound, Another Time, Another Place, Death's Other Domain, Full Circle and Dragon's Domain are really rather good. Plus the model effects sequences look staggeringly good especially in high definition. Series 2 was released on Blu Ray last Monday alongside a new version of the long out of print DVD.