"We believe you to be responsible for all the deaths. Unless you cooperate, I shall kill you and the girl without compunction!"

As Sorenson & Salamar argue Sarah sneaks off the ship into the jungle. The Doctor falls through a black void and meets with a creature. De Haan & Morelli remove Sorenson's samples but he conceals some in his cabin. Sarah calls for the Doctor at the black pit and is there when he is returned. Salamar is angered when Vishinsky halts take off to retrieve the Doctor & Sarah, who the occuloid tracker has spotted. In his quarters Sorenson begins a strange transformation as his eyes glow red, halted when he drinks of a solution. Vishinsky and De Haan revive the Doctor in the sickbay. The spacecraft again has trouble taking off but the Doctor gives up his sample, which enabled him to survive the trip to the other dimension, to Morelli to be jettisoned. However en route to the do this Morelli is killed. A mutating Sorenson drinks more of the solution to keep himself normal. Sorenson tries to convince them that another civilisation is trying to seize his discoveries. The Spaceship finds itself being pulled back to Zeta Minor, because the Doctor thinks there's still anti matter aboard. Salamar believes the Doctor and the Tardis are responsible. Sarah, left alone with Sorenson, watches transfixed as he begins to change and only comes to her senses when she hears De Haan's dying screams. She screams, and the Doctor overpowers Salamar and comes to investigate. Salamar stuns the Doctor, convinced he is responsible for De Haan's death and orders him ejected from the ship. Sorenson spills the last of a powder his solution is made from and begins to permanently transform. The Doctor & Sarah are locked in place and slide towards the opened ejection chamber.....

Unfortunately I'm still having trouble engaging with the story. It's not doing anything for me. Sorry.

I think the heart of my problem with it is I'm finding the two main characters, Sorenson & Salamar, so dislikeable. Both are single minded yet opposed so a lot of the story has been spent arguing! 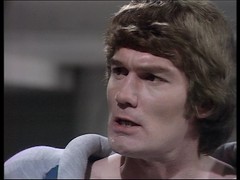 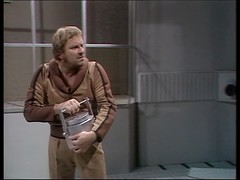 It's at this point that I thought the origins of this story stand revealed: It's Doctor Who's version of Jekyll & Hyde but apparently that element, along with the anti matter creature, are a direct lift from Forbidden Planet. 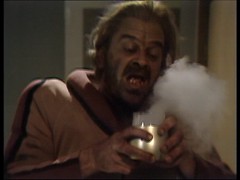 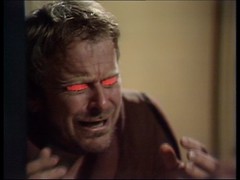 Shooting a body off into space is part of a long sci fi tradition - the BBC did it in both the Doctor Who story The Ark and the Out of the Unknown tale Thirteen to Centaurus. I can remember seeing it in The Black Hole and, of course, Wrath of Kahn. 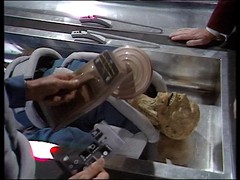 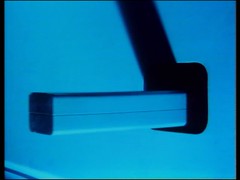 Here it serves to "hang the gun on the wall in the first act" to ramp the tension up for the end of the episode as The Doctor and Sarah are stuck in the same machinery! 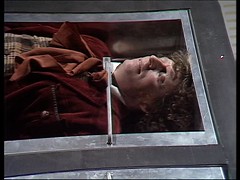 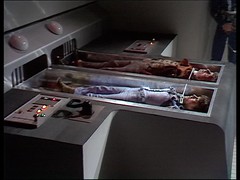 Returning for this story is experienced screen writer Louis Marks, who contributed the troubled Planet of Giants in the early years of Doctor Who and then returned in the early 70s with a script called "The Ghost Hunters" that ended up having the return of the show's favourite monsters inserted into it becoming Day of the Daleks. Marks will return in the next year with Masque of Mandragora. At this point I'm legally obligated to do the "not the manufacturer of Dalek toys" joke. Also returning for this story is director David Maloney. Having helmed The Mind Robber, The Krotons & The War Games for Troughton's last season he was in charge for the Daleks 10th anniversary appearance in Planet of the Daleks before helming Genesis of the Daleks in season 12 earlier in 1975. He'll be back next season for his final Doctor Who offerings The Deadly Assassin & Talons of Weng Chiang before becoming the producer of Blake's 7.

A veteran of not one but two previous David Maloney stories is Michael Wisher, playing Morelli. He was in The Ambassadors of Death as John Wakefield, Terror of the Autons as Rex Farrel, Carnival of Monsters as Kalik, provided Dalek Voices during Frontier in Space, Planet of the Daleks, Death to the Daleks & Genesis of the Daleks, where he also appeared as Davros and Revenge of the Cybermen where he was Magrik. His character's death in this episode doesn't stop him appearing in the final one: he voices the unseen Ranjit there. This story is his last Doctor Who appearance: he had another prior booking when asked to reprise Davros for Destiny of the Daleks and died in 1995. 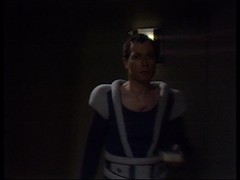 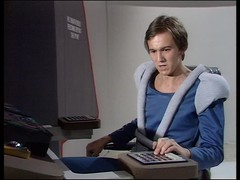 The background character Reig, who appears in this episode, is played by Melvyn Bedford who will play a mummy in Pyramids of Mars, the next story screened but filmed immediately before this one.

The Doctor spends his career battling evil so it's no surprise that the word crops up in a few story titles:

The Aztecs 1: The Temple of Evil
The Evil of the Daleks
The Mind of Evil
Planet of Evil
The Face of Evil


You'd have thought there might be more!
Posted by Philip Ayres at 07:00