"There are now two forces of antimatter aboard. I've got one, and the other one is Sorenson himself!"

The officer on the command deck, Reig, is attacked and killed, his screams summoning the crew allowing Vishinsky to save the Doctor and Sarah. Vishinsky argues with Salamar and relieves him of command. With Sarah's information the Doctor works out that Sorenson is becoming anti-matter. The ships internal hatchways are sealed. The Doctor searches Sorenson's quarters and finds the remains of the samples and Sorenson's solution. Sorenson finds him, and after they talk Sorenson, in a moment of clarity, takes the sample and goes to eject it along with himself. Salamar seizes the ship's neutron accelerator and stalks Sorenson. They clash with Sorenson killing Salamar and becoming fully mutated due to the neutron accelerator. The Doctor encounters duplicate creatures while he returns to the bridge. The Doctor goes to confront Sorenson. Stunning the real version he drag him into the Tardis which de materialises taking the Doctor, Sorenson & the samples back to Zeta-Minor. Sarah & Vishinsky attempt to repel the creatures on the ship. The Doctor forces Sorenson into the anti matter pool in the cave which causes the duplicates on the ship to vanish and stops it being dragged towards the planet. The anti-matter universe returns a cured Sorenson which the Doctor returns to the Morestran ship. The Doctor gives the professor a hint as to an alternate source of energy before he & Sarah leave in the Tardis for their appointment in London which they are 30,000 years late for. 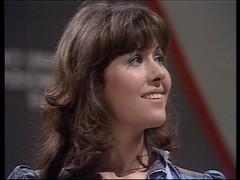 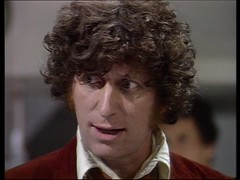 I come not praise Planet of Evil part four but to bury it in a deep dark hole. Preferably the one the monster emerged from on Zeta Minor. We open with a common theme for the story: Vishinsky and Salamar arguing. Vishinsky's finally had enough and takes charge but Salamar's response shows him up to be a spoilt brat in the playground:

VISHINSKY: Reig. If we hadn't been wasting our time down there.
SALAMAR: They caused it all.
VISHINSKY: How could they have caused this? We were with them. Attention. All crewmen report to assembly point immediately. Red alert! Red alert!
SALAMAR: Countermanded. Only I can give a red alert!
VISHINSKY: It's too late for any more mistakes, Salamar. I'm taking command.
SALAMAR: You'll regret this. 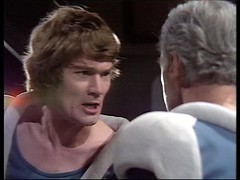 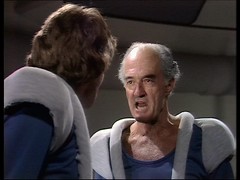 This leads to Salamar grabbing the neutron accelerator: 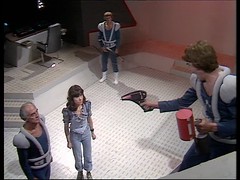 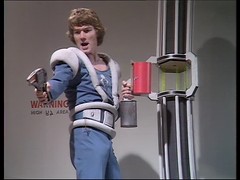 Now for such an important plot device in this episode it's not been mentioned before. Yes you can see them on set but you don't see what they are or what they do.... what do they do? What's their proper function? Are they, to use Star Trek terminology, a bit of Engineering on the Bridge? I think using "hang the gun on the wall in the first act" was in order here and they needed *Something* doing with them in the earlier episodes, perhaps successfully using them as a weapon.

Similarly where does the the forcefield gear come from? You could have shown that in an earlier episode being used to repel the monsters from the ship. 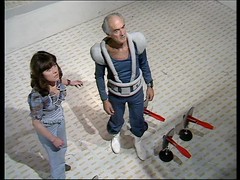 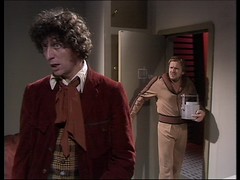 The Doctor though has twigged who's really responsible:

DOCTOR: Keep away!
SORENSON: I require an explanation.
DOCTOR: Professor Sorenson, you're ill.
SORENSON: What do you mean, ill?
DOCTOR: You think you've discovered an oral vaccine to protect you against antiquark penetration, but you're wrong.
SORENSON: It worked.
DOCTOR: For a time, but it set up a cycle of chemical change. There's no way back, Sorenson. You've reached the point where your tissues are so monstrously hybridised that the next metabolic change could be the final one.
SORENSON: No.
DOCTOR: There isn't much time.
SORENSON: No!
DOCTOR: You and I are scientists, Professor. We buy our privilege to experiment at the cost of total responsibility.
SORENSON: The hypothesis was false. 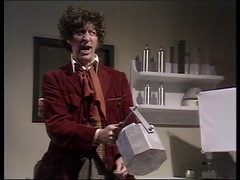 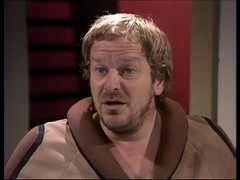 Sorenson here does seem to genuinely admit defeat and that he's wrong which may contribute to what happens later....

But before he can dispose of the anti matter the final transformation takes hold giving us some nice transformation effects, almost certainly straight from the Top of the Pops studio! The Doctor confronted by the creatures is also very nice. 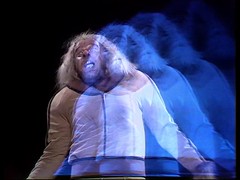 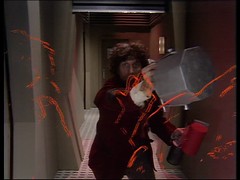 The creature's appearance has altered from earlier episodes: now they look much more like Sorenson: 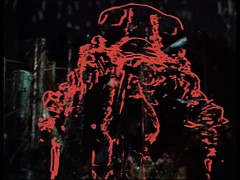 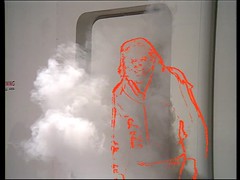 Faced with an inevitable companion question the Doctor resorts to quoting Captain Oates.

SARAH: Doctor, what are we going to do?
DOCTOR: Stay here with Vishinsky, Sarah. I'm going out now and I may be some time. 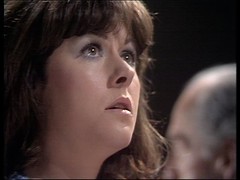 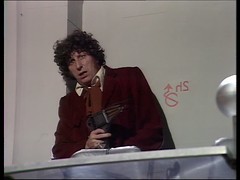 Having captured the transformed Sorenson he transports him back to Zeta Minor. Unfortunately the obviously rubber looking restraint proves no obstacle! 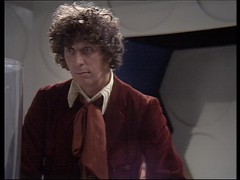 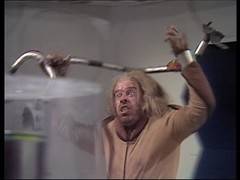 Is anyone else reminded of Inferno's Primords looking at Sorenson? There's some distinct parallels to be drawn between Inferno's Stahlman and Sorenson here: both obsessed scientists refusing advice to stop their quest to harness a new form of energy that the Doctor knows is dangerous! 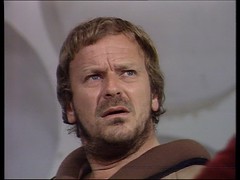 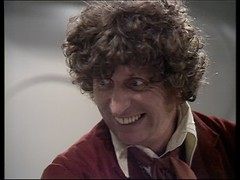 However, unlike Stahlman, Sorenson survives. The Doctor, perhaps acknowledging Sorenson's earlier admission of guilt, perhaps wishing to avoid earlier mistakes, pushes him in a different path for his quest:

VISHINSKY: Professor Sorenson! Are you all right?
SORENSON: Yes. Yes, I remember now. My researches. I've discovered a new source of energy.
DOCTOR: No, no, no, Professor. I think you'd abandoned that line. You'd decided to concentrate on deriving energy from the kinetic force of planetary movement.
SORENSON: Had I?
DOCTOR: Yes. Large source of untapped energy there.
SORENSON: The kinetic force of planetary movement. What a brilliant idea! 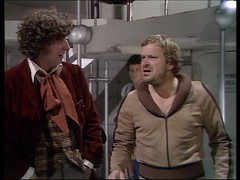 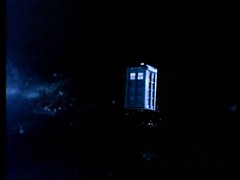 Sorry, the last episode didn't save the story for me.

I found the whole thing dull and lifeless with no real sense of danger. Essentially it's a "base under siege" story but I don't feel any attachment to any of the characters and so I don't care what happens to them. And as for the awful crew costumes...... Salamar's just loud, shouty and thick. His "Only I can give a red alert" is supposed to represent a descent into madness but it just sounds childish and I'm sure Red Dwarf has done a similar line. I won't be rushing to see this story again any time soon, in fact this is the first time I've watched it since the last go at blogging it! There's better "transformed into a monster" stories, better "quest for alternative energy stories" and far better "base under siege stories", which is what the last few episodes become. If you'd like to see people trapped inside a vessel while monsters run havoc killing most of them off then Robots of Death is a much better bet!

The planet in this story, Zeta Minor, gave it's name to http://www.zetaminor.com/, a DVD website and the home of Roobarb's DVD Forum.

Adapted by Terrance Dicks an novelization of this story was released in 1977. One of the two stories from this season not stocked by my local library, the other was Seeds of Doom, it would be some years before I read it.