"If you fire that rocket, it's not just the monster that'll die. You'll destroy a civilisation as old as your own!"

Several of the Swampies pursuing the Doctor & Romana are seized by Kroll and the rest flee. Thawn plans to use the next orbit shot from the refinery to attack Kroll, and destroy the Swampies in one go. The Doctor & Romana return to the refinery and witness Dugeen standing up to Thawn's plans. He forces Fenner to cooperate at gunpoint, but the Doctor sneaks into the rocket silo to sabotages the launch. The wounded Dugeen tries to about the launch but is killed by Thawn. The Doctor's sabotage halts launch with 3 seconds to go as Kroll submerges. Thawn goes to check the ignition and catches The Doctor & Romana leaving the rocket launching chamber. The Swampies invade the refinery. As Thawn returns to the control room with the Doctor & Romana, Fenner detects Kroll approaching the refinery. The Swampies enter, slaying Thawn, as Kroll attacks the refinery. The Doctor has Fenner operate the base centrifuge, the noise of which drives Kroll away. The Swampie leader Ranquin believes that Kroll has heard his prayers but his followers realise it was the machinery. Ranquin is taken by Kroll. The Doctor tests his theory and touches Kroll with the tracer, transforming it into the fifth segment of the Key To Time. Fenner realises the rocket firing bay is blocked, but the computer is trying to run the next launch sequence. The Doctor sabotages the computer deactivating the launch sequence. They leave Fenner behind awaiting a pick up from the authorities. The Doctor explains how Kroll consumed the High Priest's object of power, the fifth segment, and used it to grow to giant size.

We start the episode with the very real and very very large threat of Kroll:

FENNER: It's over two miles away.
THAWN: Still, if it's as big as we think it is. Dugeen, train the receptor aerial on that settlement.
DUGEEN: Right.
FENNER: What are you going to do?
THAWN: Just checking that the next orbit shot is charged and ready to fire.
FENNER: It's not due for another two hours.
THAWN: It might be early this time, Fenner.
DUGEEN: Look at that!
FENNER: It's a lot bigger than we thought.
THAWN: A hundred tons of hydrogen peroxide will still vapourise it.
FENNER: What's that supposed to mean?
THAWN: I'm going to drop our next orbit shot into the neck of that overgrown jellyfish.
DUGEEN: You can't!
THAWN: Bearing ninety seven, maximum depression.
DUGEEN: You're mad. Think of the settlement!
THAWN: Dugeen, have you never heard of the expression killing two birds with one stone?
FENNER: Now, Thawn, you think what you're doing.
THAWN: I have thought.
FENNER: Because you could kill us all. The atmosphere here is thin already. Now a fireball that size could asphyxiate us.
THAWN: I don't think so.
FENNER: You don't think so. Have you worked out the risk?
THAWN: Countdown commencing. Now get to your places.
DUGEEN: You're mad. Fenner, we've got to stop him. 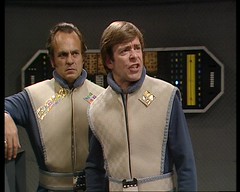 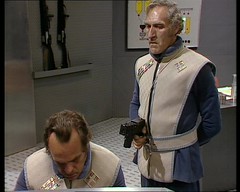 Thawn's obviously taken a dive off the deep end now and his desire to be rid of the monster and the Swampies leads him to murder Dugeen:

DUGEEN: Thawn, you can't kill innocent people!
THAWN: They're Swampies.
DUGEEN: Call them what you like, they're no different from you or me.
THAWN: They are very different, Dugeen! Now get back to your place.
DUGEEN: No.
THAWN: Are you refusing to obey orders?
DUGEEN: On moral grounds, sir. Look, if you fire that rocket, it's not just the monster that'll die. You'll destroy a civilisation as old as your own.
THAWN: I don't count the Swampies as being civilised. You're talking like one of those cranks from Sons of Earth.
DUGEEN: They're not cranks. All life began on Mother Earth. All life is sacred!
THAWN: I'm giving you one last chance, Dugeen. 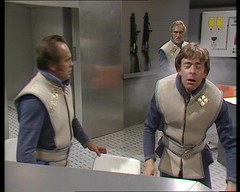 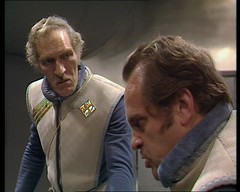 THAWN: Now then, Fenner, do you want to give me an argument?
FENNER: Countdown in two minutes.
THAWN: Right. Now, keep a track on that thing.

FENNER: Thirty seconds. Burner eight hundred, increasing.
THAWN: Dugeen, get back.
DUGEEN: You can't do it, Thawn.
THAWN: Touch that abort button and I say I'll kill you.
DUGEEN: Then kill me, but you're not going to kill the others.
THAWN: I warned him, Fenner. You heard me warn him.
FENNER: That was murder. That was cold-blooded murder.
THAWN: The countdown! Look, he hasn't aborted. It hasn't stopped.
FENNER: The master cut-out's failed. Then you shot him for nothing, didn't you. Didn't you!

THAWN: But I don't understand. There was no delay in the cut-out.
FENNER: According to the computer, there's a fault in the primary ignition panel.
THAWN: Well, I'll soon fix that.
FENNER: Too late.
THAWN: What?
FENNER: Come and look at this. It's submerging again, back into the mud, and you're not going to hit it there.
THAWN: If that spineless fool hadn't interfered
FENNER: He'd be alive now, wouldn't he, and I'm reporting you for murder.
THAWN: It was justifiable homicide! You heard me warn him not to touch that abort panel. It was an act of sabotage.
FENNER: He didn't like your methods. That did not make him a saboteur.
THAWN: He was a plant from the Sons of Earth! It's obvious that he was sent here to cripple this project any way that he could.
FENNER: You don't kill a man because you suspect he belongs to the Sons of Earth.
THAWN: All right, Fenner. That will sound very good when we get back. But remember this. If we don't get back, it'll be his fault and not mine.

Thawn isn't the only leader having trouble as there's dissent in the Swampie ranks too:

RANQUIN: What's that?
SKART: It is only the machinery, Ranquin.
RANQUIN: This place is an abomination.
SKART: Yeah, on Delta Magna all the dryfoots live in these metal boxes.
RANQUIN: When we have completed our task here, I will ask Kroll to destroy it all.
VARLIK: Ranquin, why should Kroll do as you ask?
RANQUIN: What?
VARLIK: Well, if he's the Great One and you're but his Servant.
RANQUIN: While the People of the Lakes serve and do honour to Kroll, he will protect us against those who invade our waters.
VARLIK: Kroll destroyed our village. Was that to protect us?
RANQUIN: These are blasphemous questions, Varlik!
VARLIK: I'm only asking what must be on all minds.
RANQUIN: We promised Kroll the lives of the two dryfoots who profaned his temple. We failed to keep that promise. I tell you Kroll will not rest easily beneath these waters until he has eaten of their souls.

In a way Ranquin is right, as Kroll shows up very shortly afterwards and starts tearing the refinery to pieces! 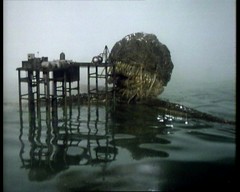 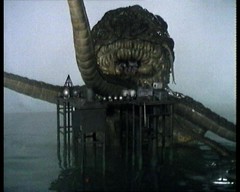 But that gives the Doctor an unexpected opportunity:

ROMANA: Where are you going?
DOCTOR: To test a theory. All theories have to be tested sometime, and this seems as good as any. You stay here in case I'm wrong.
ROMANA: About what?
DOCTOR: The Symbol of Kroll's power. 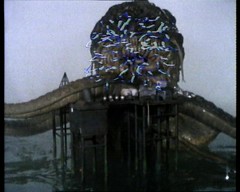 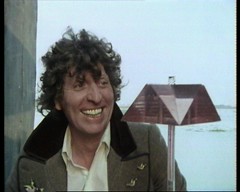 Sure enough, just like Cessair of Diplos' power came from the third segment of the Key To Time, Kroll's comes from the fifth segment and when he comes into contact with the tracer it returns to it's natural form and Kroll is destroyed.

So we've defeated the monster but suddenly the computer wants to launch the rocket automatically and we must stop it, which looks like an obvious bit of padding at the end. It timed at just over 21 minutes so was under running a tad even with a lengthy reprise and the padding added on but there was some action in it, we got some of the message behind the story coming through with Thawn racist attitude to the Swampies and we got to do something with the series story for the quest for the Key to Time. Not a bad episode!

The first and last episodes of Power of Kroll aren't too bad at all. The middle two episodes, less so, but I found them much better this time round. But it's not a popular story and blame for is usually laid at the door of director Norman Stewart, especially since he also directed the #1 Turkey from the previous season, Underworld. But I'm not sure it's his fault at all: he makes great use of the location and the model work isn't bad either. Neither does writer Robert Holmes have to shoulder the blame as there is some good stuff going on here with an underlying anti-racism message. I know the script was written in a hurry to cover a script that fell through and perhaps, like Seeds of Doom, it could have done with another pass or two by the script editor before reaching the screen but I don't think there's anything basically wrong here. Holmes takes leave of the show for a while following this story, but he'll be back in a few years time.

Power of Kroll was novelised by Terrance Dicks. It was released on video in June 1995 on the same day as the following story, the Armageddon Factor, to form the final pair of stories from the Key to Time season released, with The Ribos Operation & The Pirate Planet coming out in April of the year and followed by Stones of Blood & Androids of Tara in May. The Key To Time season was a set of releases which came with a specially designed spine picture that ran over all six title. While there has never been a video boxset release of the Key To Time, it's only ever been available as a boxset on DVD. In October 2002 all six Key To Time stories were released in Region 1 with minimal extras & restoration to help satisfy the American demand for Tom Baker stories. The Key to Time was then released as a special edition, numbered & limited to 15,000 with brand new extras in Region 2 on the 24th September 2007, which sold out very quickly with this set commanding a premium price on eBay for quite some time. The Key to Time Box Set was reissued in a non limited edition in November 2009 and can now be had for a very reasonable price.

Two days after this episode was broadcast the Blake's 7 episode Shadow was shown.