"Six ships? Is that it? The mighty battlefleet of Atrios?"

The Doctor, Romana & Merak return to K-Block, but discover Astra gone, so then return to the Marshal's control room who now treats them like old friends. The Marshal has had K-9 recycled but the Doctor rescues him from the furnace. However Romana notices a device on the Marshal's neck and further investigation of the Marshal's Mirror, which he continually stands in front of, reveals a skull hidden behind it. The Doctor promises the Marshal a psychological deterrent against the Zeons but needs to speak with one. The Marshal says he knows of a secret transmat to Zeos but when the Doctor investigates he is captures by the same black clad strangers who kidnapped Astra and transmatted away.... 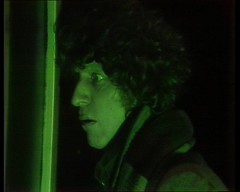 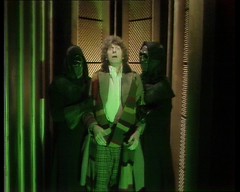 The thing I remember most about this episode is the lengthy sequence where K-9 is sent along a conveyor belt to the scrap metal furnace. Five & Half year old Philip loved it. Forty Five & a Half year old Philip looks at it and thinks "Filler". It serves no purpose to the plot and all it adds is a bit of quickly forgotten about peril. Worse still watching K-9 passing from left to right does rather remind people of The Generation Game! 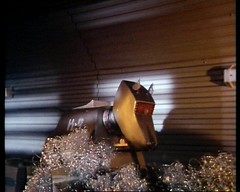 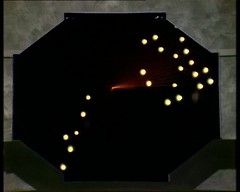 I suppose you could argue that it illustrates the dire straits that the Atrians are in that everything must be recycled but the presence of only 6 Atrian battleships also makes this point quite clearly.

THE MARSHAL: Now, Doctor, you shall see the mighty battlefleet of Atrios, the weapons that are available to you.
DOCTOR: Me?
THE MARSHAL: The new architect of our victory. Shapp, order the counter-attack.
SHAPP: Yes, sir. Base to fleet, commence attack. Attack, attack, attack.
DOCTOR: Six ships? Is that it? The mighty battlefleet of Atrios?
THE MARSHAL: It does the people no good to know the truth, Doctor. They live on hope, nothing else. It's been a long, hard struggle. Production is slow, losses are crippling, but we fight on. That's the main thing.
DOCTOR: Why?
THE MARSHAL: To win. What else? War is an expensive business, Doctor, but worth it.

The main source of mystery here comes from the Marshal of Atrios and the missing Princess Astra:

ROMANA: Doctor, when you went into the furnace after K9, the Marshal almost went berserk at the thought you might be killed.
DOCTOR: He did? How very considerate of him.
ROMANA: No, it wasn't. Because what he said was, the Doctor must not die. Not yet.
DOCTOR: What?
ROMANA: And listen, I saw something at his throat like a little black cylinder.
DOCTOR: What, a device of some sort? Something you weren't meant to see?
ROMANA: Yes, yes, I'm sure of it.
DOCTOR: A control device?
ROMANA: Yes. If the Marshal's a puppet, who's pulling the strings?
DOCTOR: Yes, and what's behind that mirror he's so fond of looking at?
MERAK: Questions, questions.
ROMANA: Shush.
MERAK: And no answers. MERAK: We're no closer to finding Astra or whatever it is you're looking for. Well, are we?
DOCTOR: Merak, I believe we're closer to finding Princess Astra than we realise. What worries me is, are we supposed to?
ROMANA: A trap.
DOCTOR: Who's pulling the wool over who's eyes? Are we supposed to fall for the Marshal's bluff or is he supposed to fall for our?
MERAK: Listen, Doctor, you said a minute ago that we were close to finding Astra. Please tell me where she is or where you think she is.
DOCTOR: It wouldn't make any difference. Even if I told you, you couldn't reach her.
MERAK: Why not?
DOCTOR: Because I think that Astra's on Zeos.

The Marshal's revealed to have a device on his neck and be talking to a skull through a two way mirror so he's clearly up to no good!

MERAK: It's the Marshal.
ROMANA: It's a two-way mirror.
MERAK: What's that?
ROMANA: Shush.
THE MARSHAL: It's done. The Time Lord suspects nothing. I've directed him to the transmat point in K block where your agents will be waiting.
ROMANA: Time Lord? How does he know?
MERAK: What?
ROMANA: Shush.
THE MARSHAL: My lord, once you have the secrets of time, please, give me my victory. I've waited so long. Please, my lord.
MERAK: He said K block. Astra was in K block.
ROMANA: We'd better warn the Doctor. Come on. 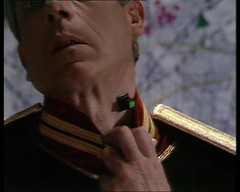 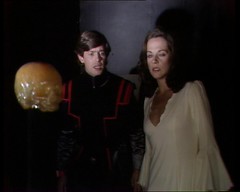 Astra's only appearance this episode comes from a broadcast to Atrios urging them to lay down their arms!

ASTRA: People of Atrios, lay down your arms. Surrender. Resistance is useless. The Zeons can never be defeated. They have taken me captive. My people, my people, they have sworn to destroy Atrios unless you surrender now. If you love me, my people, save me. Save yourselves. Hand over the Marshal and surrender. Surrender now. The war is over. 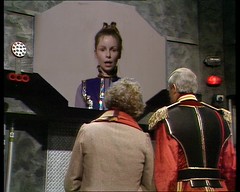 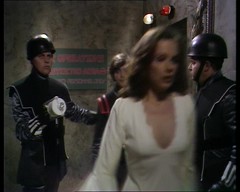 Our old friend Mister Harry Fielder makes a rare credited speaking appearance as a guard in this episode. Aitch had previously been a Central European Guard in The Enemy of the World, a Wheel Crew member in The Wheel in Space, a Vogan in Revenge of the Cybermen, a Guard in The Seeds of Doom where he actually got a credit in part 4, a Guard in The Deadly Assassin part one, a Sevateam Tribesman in Face of Evil, a Titan Base Crewman in The Invisible Enemy part one, a and a Levithian Guard in The Ribos Operation. He'll be back as a Tigellan in Meglos and a Security Guard in Castrovalva part one. His Blake's 7's include an Armed Crewman in Space Fall & Cygnus Alpha, a Scavenger in Deliverance and a Federation Trooper in Weapon, Trial, Voice from the Past, Children of Auron, Games, Warlord and Blake. In Space: 1999 he's a Medic in The AB Chrysalis, Security Guard in Catacombs of the Moon, Gerry in The Beta Cloud, a Command Centre Technician in The Lambda Factor, Security Guard George in The Seance Spectre, a Survey Team Member in The Immunity Syndrome and a Medic in The Dorcons. In a long career he's been in absolutely everything!.

Two days after this episode was broadcast the Blake's 7 episode Horizon was shown.