500 The Armageddon Factor: Part One

"People of Atrios, once more the hated forces of Zeos clamour at our gates. Once more, they shall not pass!"

Approaching the planet Atrios, at war with it's close neighbour Zeos, the Tardis is attacked by a nuclear warhead. On Atrios opposition is growing to the Marshal's military leadership of the war, lead by Princess Astra and Surgeon Merak. Under the Marshal's orders Astra is led astray by her guard and shut in a highly radioactive area. Arriving on Atrios, The Doctor breaks into the sealed K-block , where he & Romana see the missing princess Astra, but they are captured by The Marshal and accused of being spies alongside surgeon Merak. Astra is abducted by a black robed & masked figure. The Doctor, Romana & Merak are freed by K-9 but when they flee they discover the Tardis gone.

Bit of a setup episode with little indication of where the sixth and final segment of the Key To Time is. But the situation, two planets at war with each other, is clearly explained and a hint is dropped that Zeos isn't where it should be.

The Marshall: People of Atrios, once more the hated forces of Zeos clamour at our gates. Once more, they shall not pass. Be brave, my people. Be steadfast, be strong. This rain of death which the Zeons pour upon us, will it extinguish the flame of liberty, my people? No, our sun will rise again, and Atrios from its ashes will rekindle a mighty resolve, an implacable wrath, crushing the hated Zeon beneath the heel of Atrios! Even now we know the Zeon will to fight is failing. They cannot go on. Our ships dominate their skies. All I ask, my people, is that you, who have suffered so much, clench the jaw, grimly endure a short while more, until we can deliver the final blow which will bring Zeos to its knees. Victory will be ours! 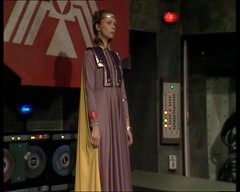 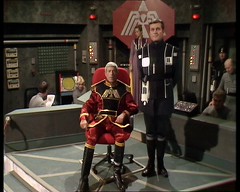 The layout in the Atrian war room gives away who's in charge here: the Princess stands at the back as a Figurehead while the Marshal gets a nice comfy chair!

Two notable landmarks are reached this episode. Firstly it's Doctor Who's 500th episode, and secondly it's Tom Baker's 119th episode bringing him level with Patrick Troughton but still behind Jon Pertwee on 128 and William Hartnell on 134.

HEROINE: Darling.
HERO: Oh, my love.
HEROINE: Don't go.
HERO: I must.
HEROINE: But you'll be killed!
HERO: Perhaps.
HEROINE: I can't bear it. I love you.
HERO: There is a greater love. Men out there, young men, are dying for it. Dying so that Atrios might live.
HERO: You must be strong. We must all be strong and play our parts until victory is won, evil vanquished, and peace restored. Then, and only then, my darling, can we love again. I must go. Kiss the children for me. Tell them their daddy will return before long.

'Hero', the male actor in the public information film that opens the show is Ian Liston, better known amongst sci fi fans for playing Wes Janson, Rogue 3's/Wedge's Snowspeeder gunner in The The Empire Strikes Back.

'Heroine' meanwhile is played by Susan Skipper. She was Chadwick's Secretary in Sweeney!, the first film adaptation of the TV series, and later appeared regularly in Don't Wait Up as Madeline, he elder Dr Latimer's secretary and the younger Dr Latimer's eventual second wife. 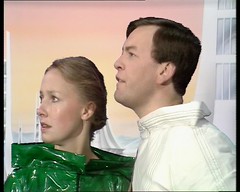 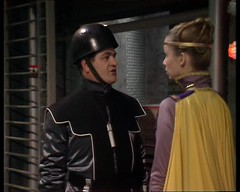 The ill fated guard in this episode is John Cannon who was, most prominently, the possessed technician Elgin in The Hand of Fear part 2. Prior to that he'd been in Monster of Peladon as a Miner.and returned as a Passer by in The Talons of Weng-Chiang, a Trog in Underworld and a Technician in The Pirate Planet. He will later be a Guard in The Creature from the Pit, the executioner in Shada, an Extra in Time-Flight, Striker's Helmsman in Enlightenment and Sir Raulf Fitzwilliam's 1st Servant in The King's Demons. Blake's 7 include a Federation Trooper in Project Avalon, Cevedic's Heavy in Gambit, a Labourer in The Harvest of Kairos and a Federation Trooper in Children of Auron while he's got a Moonbase 3 appearance as a Technician in Castor and Pollux as well as an appearance in The Empire Strikes Back as a Holographic Imperial Officer. Away from science fiction he worked with acclaimed Doctor Who director Douglas Camfield as a Legionnaire in Beau Geste (TV Mini-Series), he was in I, Claudius as a Cake Ship slave in A Touch of Murder, Porridge as Prison Inmate in A Night In, The Professionals as Huey in It's Only a Beautiful Picture and two appearances in The Sweeney as a constable in Supersnout and a Policeman in Thou Shalt Not Kill, where he also worked with Camfield.

Amongst the uncredited guards we have Peter Roy. He was a Greek Soldier in The Myth Makers, an Extra in The Highlanders, an Airport Police Sergeant in The Faceless Ones, a UNIT / Bunker Man in The Invasion, a Guard in The Seeds of Death, a Space Guard in The Space Pirates, an uncredited extra in Doctor Who and the Silurians, Technic Obarl in Hand of Fear, a Guard in The Face of Evil, an Extra in The Sun Makers, a Galifreyan Guard in The Invasion of Time and a Gracht Guard in The Androids of Tara. He returns as a Policeman in Logopolis, an Ambulance Man in Castrovalva, a Man in Market in Snakedance and a Walk on in Resurrection of the Daleks. Like many extras at this time he has Blake's 7 form too appearing as a Citizen / Prisoner in The Way Back & Space Fall, an Alta Guard in Redemption, an Albian Rebel in Countdown and a Federation Trooper / Rebel in Rumours of Death. He was in Doomwatch as a man in Project Sahara and Flood. In the The Hitchhiker's Guide to the Galaxy he plays the Limousine Chauffeur in episode 2. He's got a notable role in the James Bond film Thunderball where he played British Secret Agent 006. He has a less obvious appearance in Return of the Jedi as Major Olander Brit but that hasn't stopped the character from getting a Wookipedia page!

Also appearing as a guard is Barry Summerford He'd already been a Golden Age Man in Invasion of the Dinosaurs part six, an Elite Guard in Genesis of the Daleks, a Vogan in Revenge of the Cybermen part one, Private Thurston in Terror of the Zygons part two, a UNIT Communications Soldier in The Seeds of Doom part six, a security guard in The Hand of Fear, a Steaming Audience Member in The Sun Makers part four and a Shrieve in The Ribos Operation. He'll be back as another Guard in The Creature from the Pit part one and a Foster in The Keeper of Traken part one. His Blake's 7 include a Federation Trooper in The Way Back, a Rebel in Pressure Point, a Rebel in Voice from the Past, a Customer / Gambler in Gambit, a Federation Commando in Volcano, a Monster in Dawn of the Gods and Tando in Blake making him one of the four actors to appear in both the first and last episodes. He was also in the Castor and Pollux episode of Moonbase 3 as a Technician and played the same role in a later episode, View of a Dead Planet.

Our final guard this episode, but there's another familiar face in he next, is Richard Sheekey.He'd been in - The Talons of Weng-Chiang as a Beat Policeman and returns in State of Decay as a Guard. He'd been in Doomwatch as a man in Flight Into Yesterday and appears in two Blake's 7 episodes: Cygnus Alpha as a Prisoner and The Harvest of Kairos as a Federation Trooper. 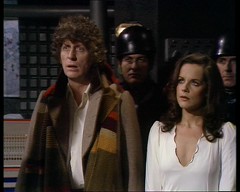 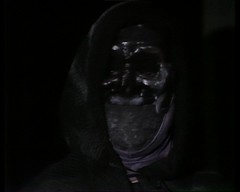 Finally appearing as the Mute that teleports away with Princess Astra is Derek Suthern who first appeared as a Path Lab Technician in The Hand of Fear followed by a Mentiad in Pirate Planet and a Gracht Guard in The Androids of Tara. He's in the next season 3 times as a Guard in The Creature from the Pit, a Mandrel in Nightmare of Eden and a Guard in The Horns of Nimon and would have made a fourth appearance as a Krarg in Shada if that hadn't have been cancelled. That also deprives him of appearances in five consecutive Doctor Who stories as he then plays a Argolin Guide in The Leisure Hive, the first story of the next season. He returns at the end of that season as PC Davis in Logopolis part one followed by playing a Cricketer in Black Orchid and a Man in Market in Snakedance. In Blake's 7 he was a Federation Trooper in The Way Back, a Scavenger in Deliverance, a Federation Trooper in Trial & Countdown, a Customer / Gambler in Gambit, a Hommik Warrior in Power and a Space Princess Guard / Passenger in Gold. He appears in the Roger Moore James Bond film The Spy Who Loved Me as an Atantis Guard and is in Fawlty Towers as a Hotel Guest in both The Germans and The Psychiatrist.

Two days after this episode was broadcast the Blake's 7 episode Weapon was shown.