498 The Power of Kroll: Part Three

"By the powers that I hold, I shall learn the truth. But if the dryfoots are not found and sacrificed according to the Holy Ritual, then all my people will suffer the anger of Kroll!"

Harg is pulled into the pipes to his death. The Doctor, Romana & Rohm-Dutt are tied up inside the temple with the sun shining on the creepers they are tied to and stretching them to death. The Doctor becomes interested in the source of Kroll's power, a holy relic which it swallowed. Rohm-Dutt reveals that Thawn paid him to supply the Swampies with weapons so he had an excuse to wipe them out and that the "Sons of Earth" group, the supposed weapons suppliers could be discredited. Kroll is measured by the refinery radar and found to be over a mile across. A storm hits the area, rocking the refinery platform. When the temple window breaks and the room is flooded with water, the Doctor, Romana & Rohm-Dutt are able to escape, but their absence is quickly discovered. As they reach the edge of the swamp the water starts to bubble & Rohm-Dutt is seized by one of Kroll's tentacles. The Doctor & Romana steal a boat to escape from the Swampies but find their escape blocked but Kroll who has risen to the surface.

DUGEEN: Six hundred yards.
THAWN: Six? From the end of its tentacles, that makes it, it must be nearly a mile across!
DUGEEN: Not far off. The central mass is a quarter of a mile in diameter by about a hundred and forty feet high.
THAWN: That radar doesn't show enough detail.
DUGEEN: I've counted thirty tentacles on one side alone.
FENNER: Well? Anything fresh?
THAWN: It still hasn't moved.
DUGEEN: Probably doesn't need to move much. We were just trying to decide what it'd look like out of the water.
FENNER: Very big and very ugly. What do you think it looks like?

Robert Holmes' brief for the story was to come up with the largest monster yet seen in Doctor Who. Over the years the Kroll creature, and director Norman Stewart's split screen filming techniques to show it, have come in for some unfair criticism but you know what? I don't think it looks too bad so far, especially in the long shots we've seen where it dominates the screen. 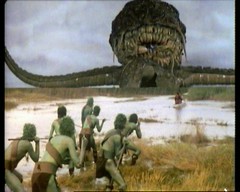 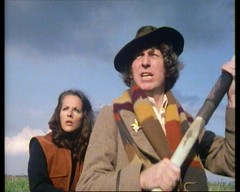 Before this the Doctor, Romana & Rhom-Dutt have had to escape from being sacrificed to Kroll, in Romana's case for the second time!

ROHM-DUTT: Varlik. Varlik? What is this seventh ritual?
VARLIK: It is the slowest of all.
ROMANA: I knew it.
VARLIK: I tried to persuade Ranquin that only Rohm-Dutt deserved to be punished by the seventh ritual and that you others should die by the first. That's very easy. They just throw you down the pit and drop rocks on you.
ROMANA: Oh, thank you. It's nice to know who your friends are.

The Doctor uses it as an opportunity to solicit information:

DOCTOR: Ranquin, what was the secret of Kroll's power?
RANQUIN: What do you know of that, dryfoot?
DOCTOR: I've read about it somewhere.
RANQUIN: Kroll had the power of the Symbol. He sees all.
DOCTOR: Yes, I know Kroll has it now, but what was it?
RANQUIN: The Symbol was a holy relic brought here by our ancestors at the time of the settlement.
DOCTOR: Yes, but what was the power?
RANQUIN: He who holds the Symbol can see the future. The power revealed how the dryfoots would destroy Delta Magna with their fighting and their greed and the evil of their great cities. That is why my people came to settle here.
DOCTOR: Your people were evicted from their homeland, Ranquin. You had no choice.
RANQUIN: What do these questions matter to you who are already dying?
DOCTOR: I like to get things straightened out.
ROMANA: Must you use expressions like that?
RANQUIN: Your mind is bent, dryfoot. It's well that you die.
DOCTOR: He's got narrow little eyes. You can't hypnotise people with narrow little eyes.
ROMANA: Oh, that's what you were trying to do.
DOCTOR: Yes, trying to persuade him to untie us. Our only chance.
ROHM-DUTT: How long have we got?
DOCTOR: I don't know the contraction rates of creeper, or the breaking point of bones and ligament.
ROHM-DUTT: I can feel it dragging already.
DOCTOR: Sorry you didn't stay on Delta Magna now, eh? Who paid you to bring the natives guns?
ROHM-DUTT: Thawn. He wanted an excuse to wipe them out.
DOCTOR: And who do they think brought them?
ROHM-DUTT: I told them the guns were sent by the Sons of Earth. Oh, I got a signed receipt, too, for Thawn to use to discredit them.
DOCTOR: Why the Sons of Earth?
ROHM-DUTT: Do you have to keep asking questions at a time like this now?
DOCTOR: No, no, no, no, shush. Why did Thawn want to discredit the Sons of Earth?
ROHM-DUTT: They're a crank organisation. They support these primitives. They want Thawn's company to pull out.
ROMANA: Why do they call themselves the Sons of Earth? Not that I care very much.
DOCTOR: No, no, no, no, that's a very good questions. After all, none of them can ever have seen the Earth.
ROHM-DUTT: Mother Earth, they call it. They believe colonising the planets is a mistake. They want us all to return to the Earth and starve. Oh! Oh! My ankles are breaking!
DOCTOR: Imagination. 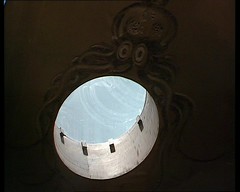 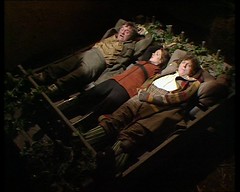 Their method of escape is one of the daftest things I've seen for a long while. In the middle of the strongest storm the moon has ever witnessed the temple window breaks. Is it the force of the storm that does it? No: it's the Doctor suddenly being able to project a high frequency note. Bwah? No previous hint the Doctor could do that, and it's not even necessary, the storm could have quite easily smashed the window! I'm sensing some Tom improvisation in rehearsals here!

So Thawn is behind the plan to supply guns to the Swampies and his motives are also revealed:

THAWN: It still hasn't shown up. Where is it?
FENNER: It's gone right off the screen now.
DUGEEN: Just ploughed straight on. It must be somewhere under the swamp by now.
THAWN: Can't you get a track on it?
DUGEEN: At a viscosity level of forty percent solids, this box goes blind.
FENNER: You know, the incredible thing is, it didn't even slow down. It seems to be able to move as easily through swamp as through water. It was on a bearing of ninety seven degrees. Hmm. Do you know where that's taking it?
THAWN: Where?
FENNER: Straight to the settlement.
DUGEEN: That could just be a coincidence, Fenner.
FENNER: Oh yes, it could have headed off in any direction. It so happens it's heading for the settlement, so the Swampies have some problems.
DUGEEN: How could it possibly know there's anything there? The settlement's two miles away.
FENNER: How did it know that Harg was in the pump chamber? It seems to have a highly sensitive mechanism for detecting food.
THAWN: In which case, the Swampies most certainly do have some problems.
FENNER: You know, I don't particularly like the Swampies, but I can't say I really hate them.
THAWN: Oh, I don't hate them, Fenner. I just want them removed permanently. I spent many years persuading the Company to back this project, and now that we're on the verge of success I'm not going to be stopped by lily-livered sentimentalists wailing about the fate of a few primitive savages.

Playing Thawn is Neil McCarthy who was previously the convict Barnham, who had his "evil impulses" removed in The Mind of Evil. He can also be seen in The Professionals as Sam Armitage in It's Only a Beautiful Picture, Clash of the Titans as Calibos and Time Bandits as the 2nd Robber. 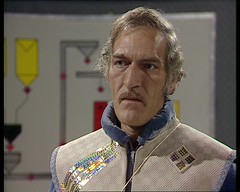 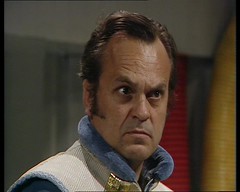 Playing Fenner, in his last Doctor Who appearance, is regular Doctor Who guest Philip Madoc. He's taking the place of Alan Browning at the last minute when he dropped out. It's been speculated over the years that Madoc thought he was playing the larger role of the lead villain Thawn. Madoc had previously been in writer Robert Holmes' first Doctor Who story, The Krotons, as Eelek also appearing in The War Games as the War Lord and The Brain of Morbius as Mehendri Solon, as well as appearing in the second 1960s Dalek Movie: Dalek Invasion of Earth 2164ad as Brockley.

He's been in loads of television including UFO as Straker's ex wife's new partner in A Question Of Priorities and the first episode of Space: 1999, Breakaway, as Koenig's predecessor Commander Gorski. I recently saw him in Midsomer Murdersplaying Barnaby's former (Welsh) DCI in The Axeman Cometh, a barking episode involving a rock group. But not half as barking as Country Matters is! Those are just the ones off the top of my head: checking IMDB also found me an Out of This World, as George Mathias in Target Generation, five roles in The Avengers, another UFO as Captain Steven in Destruction, The Sweeney as Det. Supt. Pettiford in Golden Fleece, Porridge as Williams in Disturbing the Peace and Survivors as Max Kershaw in The Chosen.

He's got a talent for playing German officers and in this role he can be seen in one of the most repeated clips on television. He plays the commanding officer of the U-Boat crew captured by the Walmington-on-Sea home guard in the Dad's Army episode "The Deadly Attachment".

Dugeen too was meant to be played by another different actor: Martin Jarvis, previously of the Web Planet & Invasion of the Dinosaurs, but he too dropped out at a late stage. Jarvis was replaced as Dugeen by regular K-9 voice actor John Leeson, who was not required in his usual role in the series. Away from the K-9 role Leeson provided the voices of the Dalek Battle Computer and, uncredited, other Dalek voices to Remembrance of the Daleks. He'd also been in Dad's Army as the 1st Soldier in Sons of the Sea, but is most famous for playing Bungle in Rainbow. He's appeared twice in Blake's 7 playing Pasc in Mission to Destiny and Toise in Gambit. He worked on the well remembered children's TV series Jigsaw as the voices of Jigg, Pterry & Biggum and used his years of anonymity as a voice artist well as Jeremy Beadle's regular hatchet man in stunts on Beadle's About! 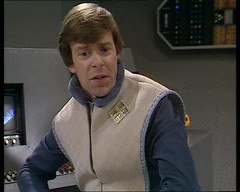 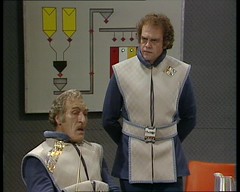 Grahame Mallard plays Harg, the refinery worker dragged to his death at the start of this episode. He'd been in The Sweeney as Ingram in Faces.

Three episodes in and no sign of the fifth refinery crew member mentioned in episode one!

Two days after this episode was broadcast the first episode of the second series of Blake's 7, Redemption, was shown.