"Well, does it matter? Hmm? Does it really matter? You know what I think? I think that Kroll's still around and he's just about due for his fourth manifestation!"

Romana is saved from the creature by the Doctor who exposes it as a disguised Swampie. Dugeen detects movement at the bottom of the swamp. The Swampies receive word from within the refinery that they will be attacked at dawn. Romana admits she's lost the Tracer but the Doctor reveals he's picked it up. The Doctor finds an underground passage from the Swampie temple. His disappearance is noticed at the refinery with Thawn believing he's in league with the Swampies. The Doctor finds a history of the Swampies and, after reading it, believes Kroll is due to return. The Swampies prepare ton attack Thawn but Rohm-Dutt's weapons misfire. Thawn's Swampie helper is grabbed by a tentacle as Kroll rises from swamp. Returning to the base Thawn plans to wipe out the Swampies and destroy Kroll with depth charges. Romana deduces that Kroll is producing the methane that Thawn's men are harvesting. They and Rohm-Dutt are captured by the Swampies. The Doctor, Romana & Rohm-Dutt are sentenced to death by the Swampies, who speak to hem of Kroll's appearance. In the refinery, Harg is dragged into the pipes by one of Kroll's tentacles.

Things move on somewhat this episode, but it's mainly a whole lot of talking.

The Doctor's discovery of the history of the Swampy tribe buried in a shaft provides some new information for us:

ROMANA: What's that you've got?
DOCTOR: I think it's an illustrated history of the tribe. A sort of Bayeux tapestry with footnotes.
ROMANA: Oh, a sort of Holy Writ.
DOCTOR: I think it's atrociously writ, but the pictures aren't bad. Look. That shows them being evicted from Delta Magna.
ROMANA: Where they originally came from.
DOCTOR: That's right, yes. They were given this moon as a sort of reservation. Look, there you are. There's Kroll in his aquarium. What did I tell you? Sucker marks.
ROMANA: What's the footnote?
DOCTOR: Hmm? Let me see. And Kroll. When Kroll awakened, he saw that the people were fat and indolent, and then Kroll became angry and he struck them down, swallowing into him the symbol of his power and killing all who were in the temple, even Hajes the priest. Great was the lamentation of the people but Kroll returned to the water and slept.
ROMANA: Oh, I like a book with a happy ending.
DOCTOR: Thus was the third manifestation of Kroll. Well, he's obviously one of those monsters who's not always about the place.
ROMANA: No, just pops up every couple of centuries.
DOCTOR: Yeah. Still, a dormancy period of that length would indicate a creature of massive size.
ROMANA: You think Kroll really exists?
DOCTOR: Well, does it matter? Hmm? Does it really matter? You know what I think? I think that Kroll's still around and he's just about due for his fourth manifestation.
ROMANA: Well, if we had any sense, we wouldn't stay.
DOCTOR: Yeah. Let's get out of here. Come on!

Though I do wonder about him dropping it back down said shaft into water when he's done with it.

Sure enough Kroll does show up and he's HUGE, dominating the horizon. In the process the swampie working at the refinery, Mensch, gets killed by it. 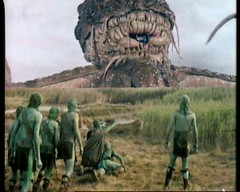 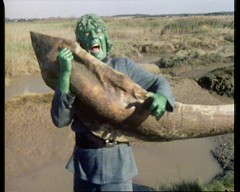 A visibly shaken Thawn witnesses Kroll's appearance and immediately seizes on it as an opportunity to deal with the Swampies:

FENNER: So, was Mensch killed?
THAWN: I think so. I didn't stay to watch. Oh, the size of that thing was unbelievable.
HARG: Why haven't we come across it before, sir?
THAWN: It's probably a deep water thing.
HARG: Even so, it's odd we haven't spotted it before now if it's as big as you say it is.
FENNER: You saw nothing of the Doctor?
THAWN: No. He'd obviously arrived there already. The Swampies were waiting for us.
FENNER: So he did warn them.
THAWN: And they were armed!
FENNER: The Swampies with guns?
THAWN: Yes! Rohm-Dutt was with them, so they're obviously all in this together.
FENNER: Yes, so they were the Doctor's friends.
THAWN: Yes, they must have arrived in the same ship. And it's got to be the Sons of Earth who are behind this. They're the only people with the resources or indeed the motive.
HARG: Shouldn't we send for reinforcements, sir? A police unit?
THAWN: No! The authorities are far too soft. Besides, once they start interfering, you can never get rid of them. We'll handle this one by ourselves, and in my way.
FENNER: Your way?
THAWN: Final! We get rid of the problem once and for all.
FENNER: No.
THAWN: It's the only way.
HARG: What about that, that creature, sir?
THAWN: Well, we've got to deal with that first, that's obvious. It's out there lurking somewhere, so once we've located it we can then finish it off with depth charges.
FENNER: I'll see what the underwater scanners are registering. 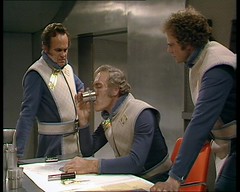 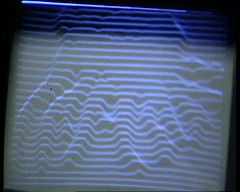 Sure enough something is down in the lake.....

DUGEEN: What's the problem?
FENNER: Scanners twelve and fourteen are not registering anything.
DUGEEN: Well, they were all right when I left them.
FENNER: They're not now.
DUGEEN: They're still functioning.
THAWN: Then why aren't we getting an image?
DUGEEN: Because, because something is blotting them out. Look, I'll try a transverse. There.
FENNER: What do you make of that?
DUGEEN: Well, that's what's covering the scanners. It's probably just a mass of sediment thrown up when the lake bed moved.
THAWN: That's what I saw.
FENNER: Those scanners are four hundred yards apart!
THAWN: I tell you that is what I saw! That thing is alive!

John Abineri, playing the Swampie leader Ranquin, was previously in Fury from the Deep as van Lutyens, The Ambassadors of Death as General Carrington and Death to the Daleks as Richard Railton. He has an Out of the Unknown to his name playing Colonel Chalmers in Thirteen to Centaurus which you can see on the Out of the Unknown DVD Set. He's been in both of Terry Nation's BBC sci fi series playing the recurring role of Hubert Goss in 17 episodes of Survivors and Ushton in the Blake's 7 episode hostage. He was in Gangsters, by future Sixth Doctor story write Philip Martin and featuring Lytton actor Maurice Colbourne, as the Consortium MD in Incident Six and The Moon Stallion, by former Doctor Who writer Brian Hayles and starring future companion Sarah Sutton, as Sir George Mortenhurze. People of my age would recall him for playing Herne the Hunter in Robin of Sherwood and would have seen him as Rimmer's Dad in the Red Dwarf episode Better Than Life. But Abineri has probably been seen by most people as the Ambassador's Butler in the original Ferrero Rocher advert! 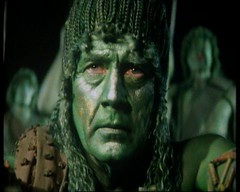 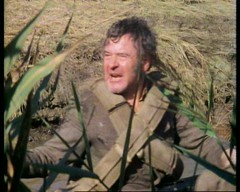 Playing Rohm-Dutt is actor Glyn Owen. He was in the late 1950s adaptation of The Invisible Man playing Ronald Smith in The Rocket and goes on to appear in Out Of The Unknown's predecessor, Out of This World playing Frank Nelson in Impostor. He also does the double of Terry Nation series appearing in Survivors as Bernard Huxley in The Future Hour and Blake's 7 as Commander Leylan in Space Fall & Cygnus Alpha. He was in The Sweeney as Wally Hough in Money, Money, Money and The Professionals as Barry Martin in Rogue. He's most famous for appearing with Maurice Colbourne in Howards' Way as Jack Rolfe.

Frank Jarvis plays the swampie Skart, who was previously a Corporal in The War Machines and Ankh in Underworld. He'd been in The Italian Job as Roger, one of the drivers, The Sweeney episode Contact Breaker as a Prison Officer and three episode of The Professionals as Patterson in Look After Annie, Musgrave in Not a Very Civil Civil Servant and Dale in Stopover. 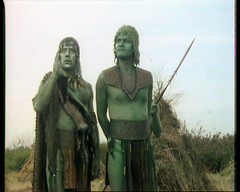 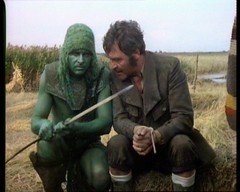 The Swampie Varlik is played by Carl Rigg who was in The Sweeney as Det. Sgt. Kent in The Placer and also has a Howards' Way as a stain on his CV playing Eckhardt Sahnn in the third episode of the fifth series.

The swampie on the refinery, Mensch, is played by regular stuntman Terry Walsh In a long career he's been a Militiaman in The Smugglers, a Soldier in The Web of Fear, a UNIT Soldier in The Invasion, The Ambassadors of Death & Inferno, an Auton Policeman in Terror of the Autons, a Stangmoor Man in The Mind of Evil episode three and a UNIT Motorcyclist in The Mind of Evil episode four, IMC Guard Rogers in Colony in Space, Castle Guard Barclay in The Sea Devils, an Overlord/Solos/Skybase Guard in The Mutants, the Window Cleaner in The Time Monster, a Guard in The Green Death, a Warehouse Looter in Invasion of the Dinosaurs, Jack in Death to the Daleks part one, the Burning Exxilon in Death to the Daleks part three and a Zombie in Death to the Daleks part four, the Guard Captain in The Monster of Peladon, the Man with Boat in Planet of the Spiders part two, S.R.S. Meeting Security in Robot part three, a Wirrn Operator in The Ark in Space, Zake in The Sontaran Experiment, a Thal Soldier/Muto/Kaled Scientist in Genesis of the Daleks, a Crew Member in Planet of Evil, the Executioner in The Masque of Mandragora and a Guard in The Face of Evil. He'll be back as Doran in The Creature from the Pit. He has served as a regular fight arranger and stunt man in the series, notably doubling for both Jon Pertwee and Tom Baker. 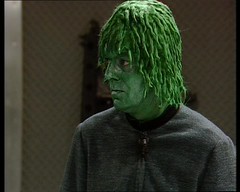 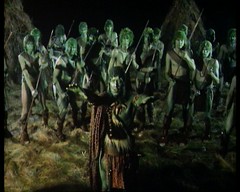 In amongst the Swampies are Philip Bird who'll feature as Sharpe in the Sapphire & Steel story The Man Without a Face.

Another of the Swampie extras is Mark Hardy who we'll see more of shortly as the Cyber Lieutenant in Earthshock, The Five Doctors & Silver Nemesis.