493 The Androids of Tara: Part Two

"Hail to the King! Hail to King Reynart of Tara!"

When the Doctor comes round Swordsmaster Zadek & Farrah discover the prince is missing. The Doctor proposes using the android as a substitute at the coronation and summons K-9 from the Tardis at which point he realises Romana is missing. Zadek & Farrah surmise the count is holding her. The revived Romana is taken to the cells by Count Grendel and shown his captive, Princess Stella, Romana's exact duplicate. The Princess refuses to cooperate with Grendel's plan to marry her and gain her titles & position so the Count wants to use Romana as a substitute. He imprisons her with his second prisoner, the feverishly sick Prince Reynart. The Doctor's party gain entrance to the palace via a secret passage. Madame Lamia begins to take an interest in the crystal that Romana had taken from her. The Doctor's party's presence is detected when a guard they stunned is found. Grendel has his guards assume duties at the coronation ceremony and tries the throne out for size. The hour approaches and the prince has not arrived, to the worry of the Archimandrite, the Taran official in charge of the ceremony. The Doctor's party are ambushed in tunnels under the palace with Zadek sending the Doctor & Android on ahead. As the bell tolls at the appointed hour the party enters the coronation chamber and finds prince, which we know is the android duplicate, on the throne to Grendel's disbelief. 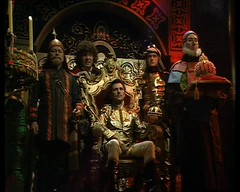 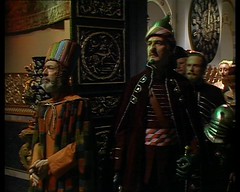 The Archimandrite crowns "Reynart" as King. Princess Strella arrived to make her vows but as she kneels the Doctor attacks her with the royal sceptre!

Another fun little episode with Peter Jeffrey positively twirling his moustache as the evil villain Count Grendel of Gracht.

GRENDEL: And how is our guest?
GUARD: She's well, my lord.
GRENDEL: Good. Let's see for ourselves: Take a look, my dear. 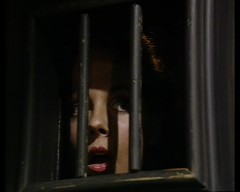 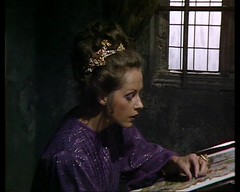 ROMANA: Oh! It's incredible!
GRENDEL: Yes, the resemblance is extraordinary, isn't it?
ROMANA: Is it an android?
GRENDEL: Good heavens, no, my dear. That's the Princess Strella. First Lady of Tara, a descendant of the Royal House, Mistress of the domains of Thorvald, Mortgarde and Freya. In fact, Tara's most eligible spinster, shortly to become, in rapid succession, my fiancée, my bride, and then deceased. Yes, it will be a tragic accident. A flower blighted in its prime. And naturally, as her husband, I shall claim her estates and her position as second in line to the throne, as provided for under Taran law.
ROMANA: I see. But since you've already got a princess, what do you need me for?
GRENDEL: Well, the Princess does not entirely agree with my plan.
ROMANA: I can't say I'm wildly surprised.
GRENDEL: In fact, she quite refuses to cooperate.
ROMANA: Good for her. But I still don't see what all this has got to do with me.
GRENDEL: Don't you, my dear? I should have thought that was obvious. If she goes on refusing, I can marry you instead in front of the great assembly of the nobles of Tara, who won't know the difference.
ROMANA: What happens if I refuse, too?
GRENDEL: Oh, but you won't. Aren't I a lucky man to have two such beautiful women as my bride?

Now we get to find out why everyone was so interested in Romana: She's the exact double of the Taran Princess Strella!

We've had duplicates of The Doctor in The Chase, The Massacre, The Enemy of the World and the Android Invasion, plus we would have done in the last story too if Tom Baker hadn't objected to "The Doctor" being seen to push Romana off a cliff! His companions are duplicated in Terror of the Zygons and Android Invasion as well. And don't forget the "mirror universe" versions of UNIT in Inferno as well! So it's well covered grounds for Doctor Who, and it's not done doing it by any means, but the idea of doubles is embedded in the original source for the story, The Prisoner of Zenda, and set up in the first episode with the price and his double "George" so we'll let it pass here. 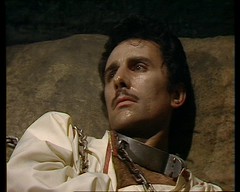 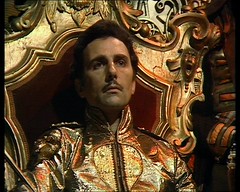 Besides it has been three years since the Android Invasion so it's about time we had another go at a duplicates story, but maybe it was for the best that Tom Baker eliminated that scene from Stones of Blood with this story due next!

One of the great things about this episode is the amount of background information it tells us about Tara and his inhabitants. For example, there's more to the relationship between Lamia and Count Grendel than servant and master as becomes apparent when she hears the plan to marry Strella/Romana:

ROMANA: Apparently your staff doesn't agree.
GRENDEL: She's prejudiced, my dear, just because I once showed her a certain courtesy. That's the trouble with peasants these days. They don't know their place any more! 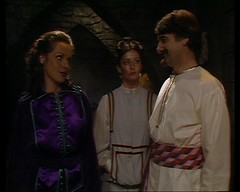 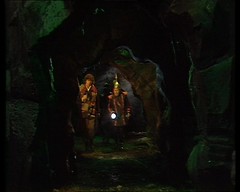 Then there's why Androids are here at all:

DOCTOR: What were these tunnels built for?
ZADEK: They were plague tunnels built about two hundred years ago to allow the royal court to move in and out of the palace without having to pass through the contaminated city.
DOCTOR: Ah.
ZADEK: The great plague wiped out nine tenths of the population.
FARRAH: That's when the survivors started using androids to replace the people.
DOCTOR: I see.

The technological levels on Tara seem quite advanced for the medieval looking feudal society portrayed here. There's the electronic swords and crossbows:

DOCTOR: It fires electronic bolts. How very quaint.
FARRAH: It's a peasant's weapon. 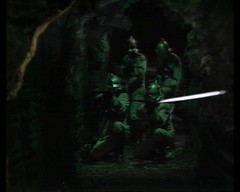 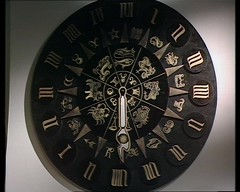 Then there's the clock, with time measured out in 16ths rather than out 12ths! That's not likely to get used again anywhere!

Returning for a fourth & final Doctor Who appearance is Cyril Shaps as the Archimandrite. His previous roles were in The Tomb of the Cybermen as John Viner, The Ambassadors of Death as Dr. Lennox & Planet of the Spiders as Prof. Herbert Clegg. I think this his only appearance in the series where his character survives the story! There again Michael Sheard appears in the show six times and his character always gets it! Elsewhere in a long career he appears in Quatermass II as a Control Assistant in The Destroyers and has an Out of the Unknown to his name appearing as Dr. Duval in the missing second season episode Too Many Cooks. He plays the convict Jackdaw in the Porridge episode The Harder They Fall and Turner in The Sweeney episode May. He's briefly onscreen in the Bond film The Spy Who Loved Me as Dr. Bechmann, one of the two scientists killed in the helicopter explosion near the start. He was in the fondly remembered children's series Into the Labyrinth as Kadru in Cave of Diamonds and famed early 80s comedy The Young Ones as the Old Man Next Door in Demolition. I saw him in the cinema in Erik the Viking as Gisli the Chiseller. One of his later roles is in Dark Season, the future Doctor Who writer Russell T Davies Children's series, as Mr. Polzinski in the first three episodes. 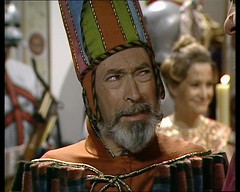 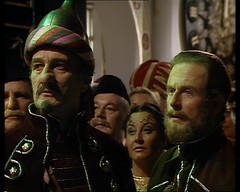 Martin Matthews, playing Grendel's henchman Kurster, was in The Tripods as the Games Captain in season 2 episode 4.

There's plenty of extras playing noblemen & women but I can only find two listed on IMDB. Barbara Bermel, listed as a Court Lady against the wrong episode, was a Villager in Planet of the Spiders, an Android Villager in The Android Invasion, a Masquer in The Masque of Mandragora, a Sevateem in The Face of Evil and a Rebel in tunnel in The Sun Makers. She'll be back as a Lazar in Terminus. She's also been in Doomwatch as a Woman in Flood and in Space: 1999 as a Thulian in the superb Death's Other Dominion, 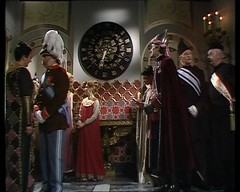 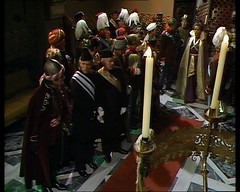 Brychan Powell, playing a Noble, is one of a number of the series regular extras in this story. We last saw him as a Mentiad in The Pirate Planet and he'll be back as a Logopolitan in Logopolis.

Most of the rest of the extras are employed as Gracht Guards. Derek Suthern was also last seen in The Pirate Planet as a Mentiad. He returns in The Armageddon Factor as a Mute. Mike Mungarvan was in the previous story The Stones of Blood as a druid and returns in Destiny of the Daleks as a Dalek Operator. 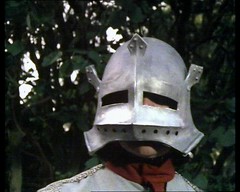 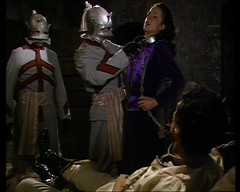 Peter Roy has worked on the program for years: his last appearance is a Gallifreyan Guard in Invasion of Time and he returns as a Guard in The Armageddon Factor at the end of this season. Finally there's Steve Ismay who we've not seen for a little while. He'd previously been a BBC3 TV Crewmember in The Dæmons episode two, a Guerilla in Day of the Daleks episode three, a Stills Cameraman in Day of the Daleks episode four, a Presidential Guard in Frontier in Space episode two, a UNIT Soldier in The Time Warrior part one, an Exxilon in Death to the Daleks parts one to three, a Zombie in Death to the Daleks part four, a Guard in The Monster of Peladon, a guard in Planet of Spiders and a guard in Deadly Assassin. He'll return as a citizen in Full Circle and a Cyberman in Earthshock. He appears in Blake's 7 as a Scavenger in Deliverance, a Guard in Dawn of the Gods, a Convict in Moloch and a Hommik in Power. He's got two Porridge appearances to his name in A Night In as a Prison Warden and Happy Release as a Gardener.