492 The Androids of Tara: Part One

"Can you mend an android?"

The Tardis lands on the planet Tara searching for the fourth segment of the Key to Time. The Doctor sends Romana to complete the task while he takes a day off to go fishing. She quickly finds the fourth segment disguised as a statue and uses the tracer to transmutate it back to it's crystal form. However she is attacked by a Taran woodbeast and then saved by Count Grendel of Gracht who, interested in her and the crystal, takes her back to his castle. The Doctor is found on the river by two swordsman and accused of trespass on Prince Reynart's hunting estate. Hearing that he is a Doctor they ask him to look at their damaged android. Romana is taken to Madam Zamia, Count Grendel's surgeon/engineer to be checked out. They marvel at her and have her restrained. Grendel orders Romana disassembled but orders that her head is kept because it's "quite remarkable". Taken to a hunting lodge, the Doctor is introduced to Prince Reynart and his damaged android. Zamia & Grendel realise Romana is flesh & blood, and not an Android as they had thought. Reynart intends to use his android to prevent an assassination attempt on him at his coronation from Count Grendel. The only other contender for the throne, Princess Stella has disappeared. Grendel has Romana drugged. The Doctor demonstrates the repaired android duplicate of the prince and after it leaves the room they celebrate with a glass of wine. Soon however all collapse, drugged by their drink, as Count Grendel arrives..... 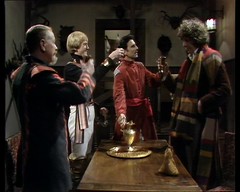 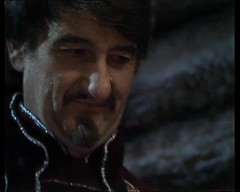 Oh that was fun. Looked nice, especially the location stuff, a decent bit of humour to the script and sets up the story with political intrigue, missing princesses and android duplicates. Been a while since I watched this story but that was good, competent stuff. I remember the swords with their electric charges vividly from when I was younger.

In Tom Baker's first story Robot we saw the Doctor emerge from the Tardis in a variety of costumes, and many a companion has walked into the console room wearing a new outfit but I think this is the first time we see the actual Tardis Wardrobe as Romana chooses an appropriate dress to wear on Tara. Unfortunately what she picks is hideous and the dress she's wearing at the start of the episode, reused from the Ribos Operation, is much better! 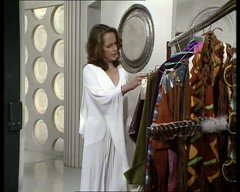 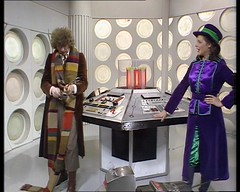 ROMANA: What about our task? The Key to Time, remember?
DOCTOR: Oh, that old thing.
ROMANA: Yes, that old thing. The Guardian did stress the need for urgency, didn't he?
DOCTOR: Shush.
ROMANA: I'll do it.
DOCTOR: If you must.
DOCTOR: I just feel I deserve a little break. After all, we've got half the segments.

The Doctor wanting time off is a bit of a running joke at the moment. Here's the start of The Ribos Operation, right before the White Guardian shows up to send them on their quest:

This time he decides to go fishing, which he has referred to before notably in Talons of Weng-Chiang where he talks about fishing with the venerable Bede!

DOCTOR: Aha.
ROMANA: Where are you going?
DOCTOR: Fishing.
ROMANA: Fishing? What's fishing?
DOCTOR: Fishing? It's an art, worthy of the knowledge and practise of a wise man. Isaak Walton
ROMANA: Look, we haven't got time for you to practise anything. We've got to find the fourth segment.
DOCTOR: You find it. I'm taking the day off.
ROMANA: The day off?
DOCTOR: Yes. After a journey of four hundred years and twelve parsecs, I'm allowed a rest of fifty years.
ROMANA: Where does it say that?
DOCTOR: Section ninety three, paragraph two, laws governing Time Lords. You look it up. Go on.
ROMANA: What? You just made that up. But you can't just spent the fifty years fishing.
DOCTOR: Well, of course not. I'd get bored. I just propose to spend the next couple of hours fishing.
ROMANA: But what about the fourth segment?
DOCTOR: You get it.
ROMANA: Right, I will.
DOCTOR: Yes, you do that. It's a lovely day, beautiful countryside. The walk will do you good.
ROMANA: Thank you.
DOCTOR: Would you just mind standing aside, please? You're casting a shadow. It frightens the fish.
ROMANA: Frightens the fish. Look, I'm going to get that fourth segment and I'll be back here in under an hour. You be ready to leave.
DOCTOR: Yes.

Romana's estimate is a little pessimistic, within 7 minutes of the episode starting she's found the disguised segment and returned it to it's crystal form! 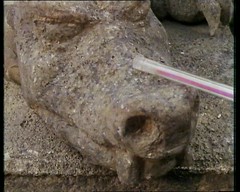 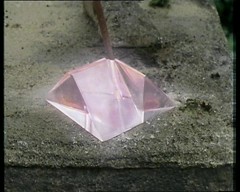 Unfortunately that leads her into contact with the Taran Wood Beast, not one of the series most successful monsters! 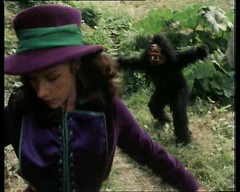 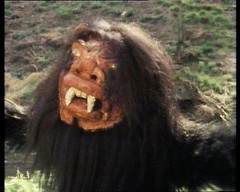 And that, in turn leads to her being rescued by Count Grendel of Gracht, played by chief guest star Peter Jeffrey! Location work for this story was conducted in and around Leeds Castle which, confusingly, is in Kent rather than Yorkshire. It's been used over the years as a location by a number of films & TV productions as well as playing host to a number of concerts.

The main view of Castle Gracht is provided by the South of Leeds Castle. 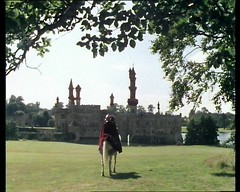 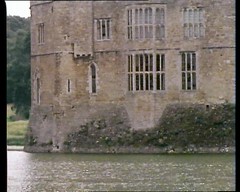 Views to the West provide the close up seen in later episode of the exterior.

The interior courtyard is seen as The Count arrives at the castle. 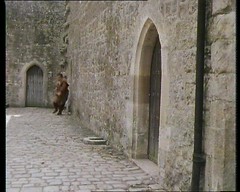 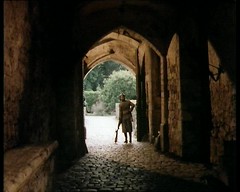 The Tardis materialises in the Wood Garden which also provides a lot of the area Romana wanders in as well as where the Doctor fishes. 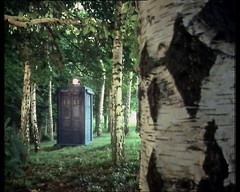 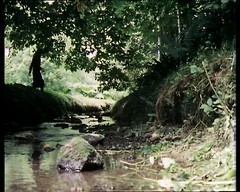 The Mill is the location of the statue which has the Fourth Segment embedded in it. 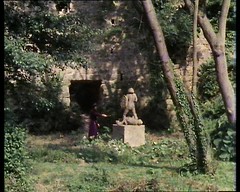 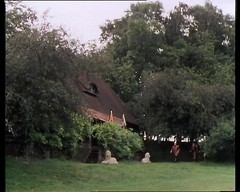 Finally The Pavilion provides the location where Reynart and his party are staying.

Returning to the story is David Fisher who wrote the preceding tale The Stones Of Blood, becoming the second writer, after Chris Boucher with Face of Evil & Robots of Death, to write consecutive stories. He would have repeated the trick with the second and third planned stories next season, A Gamble With Time & Creature from the Pit, if it weren't for personal circumstances forcing him to withdraw from writing Gamble with Time, which was set for recording after Creature from the Pit and in the end became City of Death. 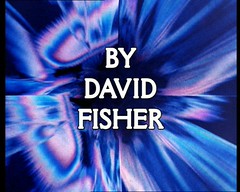 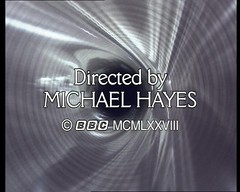 Director Michael Hayes is new to the series. He will return for this season's finale, The Armageddon Factor, and the aforementioned City of Death.

This episode aired 2 days after the fifteenth anniversary of the first episode of Doctor Who being shown.

REYNART: Tomorrow, at the appropriate hour fixed by the astrologers, in the great Coronation room of the Palace of Tara, I am to be crowned King.
DOCTOR: Well, congratulations.
REYNART: They will be in order if I get there.
DOCTOR: Why? What's to stop you?
REYNART: Count Grendel of Gracht.
DOCTOR: What?
REYNART: He'll kill me if he needs to. After all, you can't crown a dead Prince. Grendel and his men will be watching every entrance to the palace to prevent my getting to the Coronation room at the ordained time.
DOCTOR: So?
REYNART: If I fail to appear at the right moment, I forfeit my right to the crown.
DOCTOR: Ah. And that's when Grendel of Gracht steps in?
REYNART: The only other contender for the throne is the Princess Strella, but she disappeared some time ago. Nobody knows where she is.
DOCTOR: Where does George come into all this?
ZADEK: There have been three attempts on his Highness's life already. The next one could be successful.
DOCTOR: Ah, I see. Let them attack George here instead of the Prince.
REYNART: Precisely. We use George, the android copy of me to create a diversion, to distract their attention.
DOCTOR: And draw their fire.
REYNART: To draw their fire, while we slip past the guards into the Coronation room. What do you think, Doctor?
DOCTOR: Well, it has been done before....

The Doctor is effectively holding his hand up here to the very heavy debt Androids of Tara owes to The Prisoner of Zenda. I've never read it or seen any of it's many adaptations but homages to it, like this Doctor Who story, abound. I know enough to know it's something about political intrigue, a marriage and at least one double. In fact the night before I wrote the original blog entry for this story I was, without any forward planning on my part, watching Futurama season 5 episode The Prisoner of Benda which also uses Zenda as inspiration and tosses in some mind swapping and the Harlem Globetrotters! Order it on DVD or Blu-ray.
Posted by Philip Ayres at 07:00