490 The Stones of Blood: Part Three

Arriving at the stones Miss Fay attempts to ensure the Doctor's non-interference by using holding Romana hostage before disappearing. The Stone Creatures, which the Doctor identifies as Ogri, attack & kill two campers nearby absorbing their blood. The Doctor builds a machine to transport himself into Hyperspace, where he deduces Romana is being kept. He finds her but accidentally releases the Megara, justice machines who were to judge the prisoner, Cessair of Diplos, who was being taken for trial. However she has somehow escaped and the crew have been killed leaving the Megara trapped. They charge the Doctor with having broken laws by releasing them but while the argue a point of order the Doctor & Romana escape to the point he hopes Professor Rumford will transport them home from. However the waiting Professor & K-9 have been attacked by Vivian Fay and the Ogri, destroying the Doctor's device. She transports herself & the Ogri to the ship in Hyperspace where she tells the Doctor & Romana that they are trapped and she will destroy them! 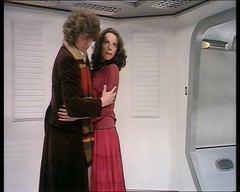 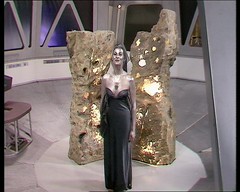 A game of two halves. More of the sparsely lit countryside scenes for the start of the episode and then it all changes and the contrast between the scenes on Earth and the stark brightly lit spaceship couldn't be more striking!

Although the spaceship model isn't one of Matt Irvine's best efforts (those are obviously microphones on the back) the shots mixing the Doctor in the ship, seen through a window with the surrounding Hyperspace are great as are the musical cues that Dudley Simpson uses throughout the spaceship scenes. 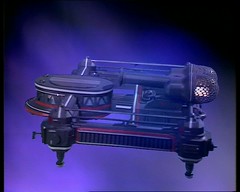 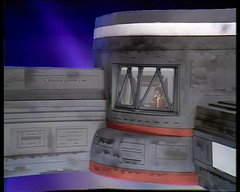 This episode is a joy for those of us who like spotting reused props and costumes!

Yes that's a Kraal android in the cell with Romana and a Wirrn in another cell! 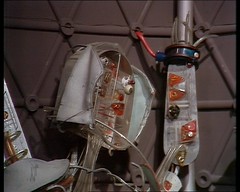 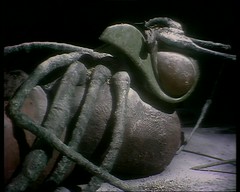 And our old friends the Triangular/Hexagonal Wall Panels (first seen in the Mutants) and the UFO Moonbase control banks. 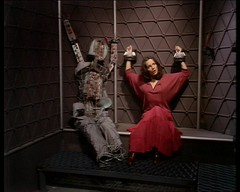 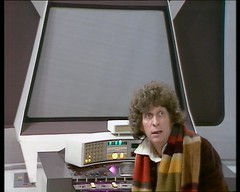 The control screens on the ship are a bit interesting: is that the first time we've seen real, albeit primitive, computer graphics in the show? 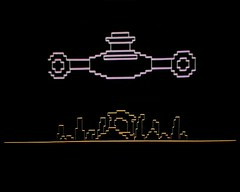 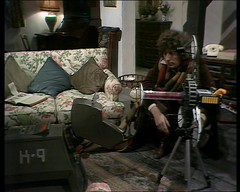 Liz was mightily amused by the silly sound effect as the Doctor powers up his "transporting to Hyperspace" gun/device which she looked at and said "it's pinky purple with a ridgey bit and a big bulbous end - it's a willy!" before insisting I put that comment in!

However the Megara are a rather nice effect, far superior to a similar one seen during the previous season. 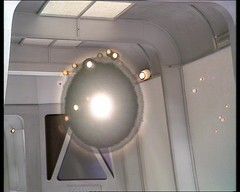 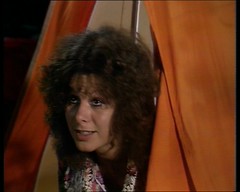 Like the previous story there's no actors involved who've been in Doctor Who before and only one of them appears later: Shirin Taylor, playing the camper Pat here in the 100th story, later returns as a customer in Dragonfire, the 150th story. Her unnamed partner is played by James Murray. Their death is particularly horrific even by Doctor Who standards with them in agony and the flesh being stripped from her hands. 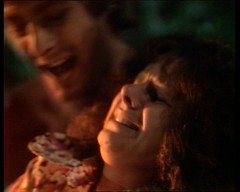 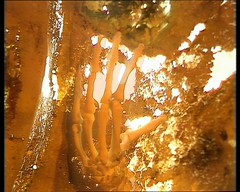 The director Darrol Blake is helming his first & only Doctor Who story. He had previously worked on Doomwatch directing No Room for Error & Flight Into Yesterday in the second season in 1971 and Without the Bomb, Deadly Dangerous Tomorrow & The Killer Dolphins plus the untransmitted Sex & Violence in the third season in 1972. No Room for Error, Flight Into Yesterday and Sex & Violence exist and can be found on The Doomwatch DVD. Blake also worked on the 1974 The Tomorrow People story A Rift in Time. 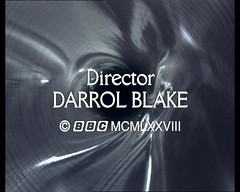 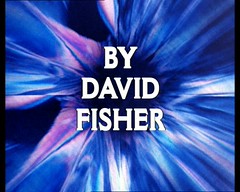 Also working on the show for the first time is experienced writer David Fisher. He'd worked with Script Editor Anthony Read before on The Troubleshooters, a series that Read had Script Edited & Produced. Fisher will become the second Doctor Who author to write two consecutive stories after Chris Boucher who wrote Face of Evil & Robots of Death. Indeed as we'll see he very nearly became the first person to write two sets of consecutive stories with Nightmare of Eden & The Gamble With Time. Alas personal circumstances intervened and A Gamble of Time was passed to other hands to finish.....