The Doctor is taken to the stones for sacrifice but is saved when Professor Rumford arrives scaring the cultists away. The Doctor summons K-9 and together the two of them track her to the cliff edge where she is desperately hanging on and rescue her. On hearing her story the Doctor wonders if someone is harnessing the powers of the third segment of the Key To Time. The Doctor leaves Romana to research Vivian & Amelia's library on the stone circle and goes to visit Mr De Vries at Boscombe Hall. On his arrival he & K-9 find the inhabitants dead and are attacked by a giant mobile stone which K-9 repels. Joined by Professor Rumford the Doctor searches the house and finds a number of missing paintings of previous owners all of which are identical to Miss Fay. At the stone circle a masked woman brings another stone, which she calls an Ogri, to life with blood taken from De Vries & his wife. Romana returns to the circle and finds Miss Fay in the costume who raises her staff blasting Romana who vanishes.... 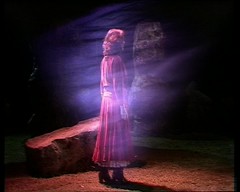 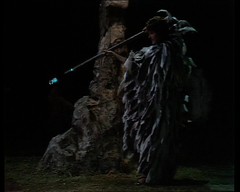 Cracking episode, lots of Gothic horror overtones. Tom's obviously enjoying himself acting opposite Beatrix Lehman, playing Professor Rumford, and nowhere is it more obvious than the scene where she rescues him from the druids:

DE VRIES: Bind him to the stone.
MARTHA: Leonard, I don't like this.
DE VRIES: It is the will of the Cailleach.
MARTHA: It's murder!
DE VRIES: We cannot question the will of the Goddess.
MARTHA: Leonard, think. Think what you're doing.
DE VRIES: The Cailleach demands blood.
MARTHA: She's never demanded a human sacrifice before.
DE VRIES: I dare not oppose her will. I dare not.
MARTHA: If it's her will, where is she? Why isn't she here?
DE VRIES: She will come.
MARTHA: Leonard, this man may be missed. He must have friends. Surely, if they inform the police
DE VRIES: The Cailleach will have foreseen everything. We must have faith. She will come. DOCTOR: Hello. I hope that knife's been properly sterilised.
DE VRIES: Blasphemer.
DOCTOR: No, no, no, no. You can catch all sorts of things off a dirty knife, you know. Lockjaw, tetanus, not to mentions staphylococcal infections
MARTHA: I'm not going to be a party to this.
DOCTOR: Good for you.
DE VRIES: Then don't be.
DOCTOR: Hold it. Does your Cailleach ride a bicycle?
DE VRIES: Bicycle?
DOCTOR: Yes.
DE VRIES: You'll die with blasphemy on your lips.
DOCTOR: It's just that I can see a bicycle approaching, unless I'm very much mistaken. Over here!
DOCTOR: Help! Over here!
EMILIA: Hang on! I'm coming!
DOCTOR: Phew.
EMILIA: Good grief, man. What are you doing? You'll catch your death of cold.
DOCTOR: Well, you know how it is, Professor. I often get tied up in my job. Careful!
EMILIA: Who were those people? They looked as if they were going to cut your throat.
DOCTOR: Yes, thank you. Well, I don't think they'd quite made up their minds, but that was definitely one of their options. Why have you come back?
EMILIA: I came back to give Romana a flask of tea. Knowing how irresponsible men are, I thought she'd still be waiting for you.
DOCTOR: But I thought she was with you.
EMILIA: No, she stayed behind to wait for you.
DOCTOR: What? Then where is she? Romana! Romana! Nothing.
EMILIA: I don't want to be alarmist, but if she's lost on the moor, there are several old mine workings.
EMILIA: It can be very dangerous in the dark.
DOCTOR: Yes, thank you. Ro...... Look!
EMILIA: Oh, her shoes.
DOCTOR: Yes. Romana!
EMILIA: Well, the only thing we can do is to organise a search party in the morning. Of course, if we had a dog
DOCTOR: Dog! Professor Rumford. May I call you Emilia? Emilia, you're a genius.
EMILIA: You have a dog?
DOCTOR: Have I got a dog.
(The Doctor blows his dog whistle.)
EMILIA: Oh, that's one of those high frequency whistles, isn't it.
DOCTOR: Yeah, something like that. Come on, K9!

Unfortunately the shots of Romana hanging over the cliff and her sitting with the Doctor afterwards aren't the greatest CSO the world has ever seen! 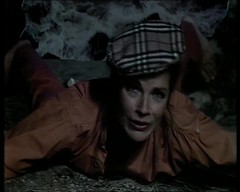 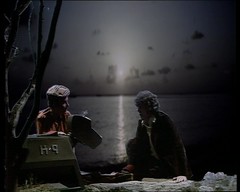 The episode itself is set near the sea despite my Wife's protests that the Vegetation doesn't look cliff top. That's because location filming for this story took place in Oxfordshire not that far short of the furthest distance from the sea in England! 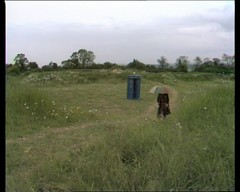 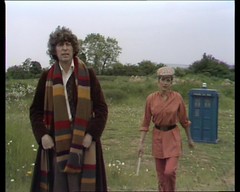 The Moor Land on which the Tardis lands is found at Manor Farm in Little Rollright, Oxfordshire, 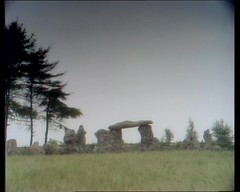 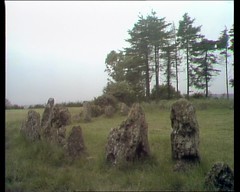 The Kingsmen, part of Rollright Stones on the Oxfordshire and Warwickshire border are the location used for the Nine Travellers. 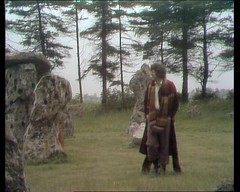 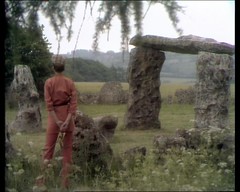 The nearby Little Rollright Quarry provides the slightly suspect cliff edge used at the start of this episode in the dreadful CSO mentioned above. 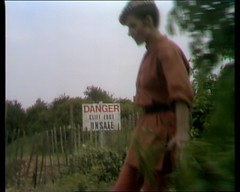 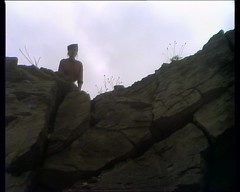 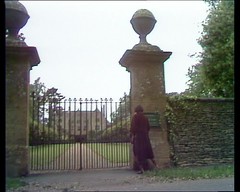 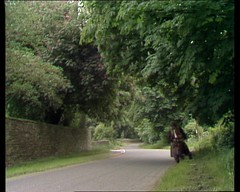 On that road lies The Manor, Little Compton which is the DeVries Manor House. 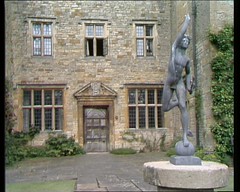 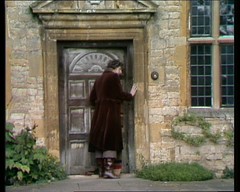 Actually given how close these locations are each other and to where I live, I really must go and have a look!

The scene between Romana, Professor Rumford and Vivian Fey in the Cottage are rather wonderful and make an interesting point:

EMILIA: Here you are, my girl.
ROMANA: Oh, thank you.
EMILIA: Vivien is making some sausage sandwiches. Nothing like sausage sandwiches when you're working something out. Well now, any problems with the notes?
ROMANA: No, no, they're very full. Er, you say here that you've identified the Nine Travellers, our stone circle, as one of the three gorsedds of prophecy. What's a gorsedd?
EMILIA: Old Welsh. A gorsedd is a place of augurs, people who foretell the future.
ROMANA: Ah.
EMILIA: There's an ancient Welsh triad that says, it's a three line poem, umpity, bumpity. Oh, you'll find them in the notes.
VIVIEN: The three gorsedds in the island of Britain are the gorsedd of Salisbury in England.
EMILIA: And that's Stonehenge, of course. 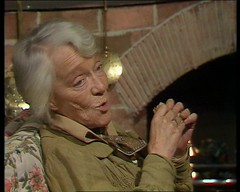 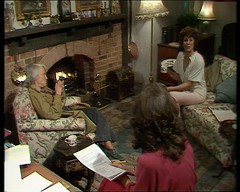 ROMANA: Thank you.
VIVIEN: The gorsedd of Bryn Gwyddon in Wales, and the gorsedd of Boscombe Moor in Damnonium.
EMILIA: And that's our Nine Travellers.
ROMANA: Yes, but why should this particular circle become a place of prophecy, of augury? You say yourself that there are a dozen or more stone circles in this part of the country.
EMILIA: If I knew that I'd be professor of megalithic archaeology at Bangor instead of that fool, Idwal Morgan.
ROMANA: Er, there is one thing which does strike me as rather curious. Well, until recently, the land the circle stands on has always been owned by a woman. Haven't you noticed? Lady Montcalm, Senora Camara, Mrs Trefusis. And if you go further back, right in the Middle Ages, it came under the control of the Mother Superior of the Convent of the Little Sisters of Saint Gudula.
VIVIEN: What does that prove? Lots of convents and monasteries owned enormous areas of land in the Middle Ages.
ROMANA: Yes, but here it was women. All women.
VIVIEN: What are you suggesting, Romana? Some kind of sisterhood that's been worshipping these stones for, when was the convent founded? Twelfth century, wasn't it? For seven hundred odd years? That's a little bit hard to believe, isn't it?
ROMANA: What other explanation is there?
VIVIEN: What about Mister De Vries? He doesn't quite qualify as a head of a sisterhood.
ROMANA: Well maybe he's not really the head. This convent, does it still exist?
EMILIA: Oh, good heavens, no. And it was a man who saw to that, Henry the Eighth. It went the way of all flesh with the dissolution of the monasteries.
ROMANA: What about the convent records?
VIVIEN: Oh, I should think they were destroyed.
EMILIA: Some of them could still be at the hall.
ROMANA: The hall? What hall?
EMILIA: Mister De Vries' house. It was built in 1572 on the old site of the convent.
ROMANA: Well, let's go and take a look. What are we waiting for?
EMILIA: Oh, good girl! That's the spirit. No time like the present. Get my bike, Vivien.
ROMANA: Er.
VIVIEN: Romana can borrow mine. You won't be needing me with you, will you?
EMILIA: No. Keep a good fire burning in case the Doctor comes back. Ah, here we are.
ROMANA: What's that?
VIVIEN: A policeman's truncheon. Last year when she went to lecture in New York, she took it with her in case she got mugged.
ROMANA: And did she get mugged?
VIVIEN: No. She got arrested for carrying an offensive weapon.
EMILIA: Come along, Romana. Tally-ho!

That point is picked up as The Doctor & Professor Rumford search DeVries' wrecked house: 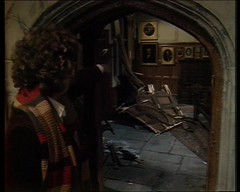 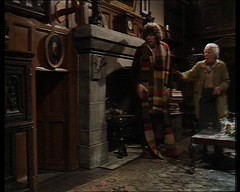 DOCTOR: Anything?
EMILIA: Nothing prior to 1700. You?
DOCTOR: Nothing. I've searched the whole house. Completely empty. No secret passages, no hidden rooms, nothing. It's got to be here, though.
EMILIA: What has?
DOCTOR: Well, the Cailleach.
EMILIA: Oh, the witch hag?
DOCTOR: Yes.
EMILIA: It's only a legend.
DOCTOR: Yes, I know. And so was Troy until dear old Schliemann dug it up. Morrigu, Cerridwen, call her what you like. In four thousand years I expect she's had quite a few names, but where is she? Hmm? No statues, no images, no pictures. Of course! The missing paintings! They must be here somewhere.
EMILIA: I don't see why the paintings are so important.
DOCTOR: What? Then why have they been hidden? Tell me that. Why have they been hidden? Beware of the birds, he said. The raven and the crow. The raven and the crow. Birds!
EMILIA: Where? What?
DOCTOR: Phew.
EMILIA: Oh, jumping Joshua. A priest hole.
DOCTOR: Well, certainly. The place is old enough. Come on!
EMILIA: Wait for me, Doctor!
DOCTOR: Now mind these stairs.
DOCTOR: Look. Lady Montcalm, painted by Allan Ramsay.
EMILIA: Good grief, I don't believe it. 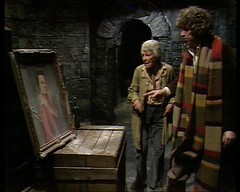 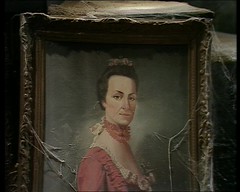 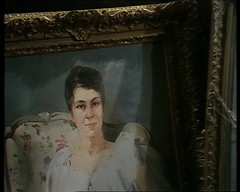 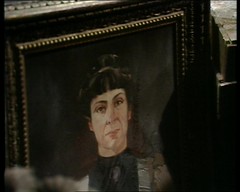 EMILIA: I know that face.
DOCTOR: So you should. It's your friend, Miss Fay!

And that revelation is shortly followed by Vivian making Romana vanish!

There's something about country manor houses and cottages in Doctor Who which puts you in mind of stories like Pyramids of Mars and Image of the Fendahl or, even further back, The Daemons. Despite loving London so much the Doctor very much enjoys a trip top the country ever so often!