"For thousands of years our lives have been dominated by a mystery. The Dodecahedron belongs to all of us, not just the Deons!"

While the Doctor & Romana repair K-9's water damage the population of Tigella, isolated underground by the vicious plant life on the surface, struggle with the dodecahedron that proceeds all their power. The scientific Savants are restricted in what they can do by the religious Deans who worship the Dodecahedron. The leader of the Savants, Zastor, summons the Doctor to help to the consternation of the Deon leader & high priestess Lexa. A group of Gaztaks led by General Grugger kidnap an Earthling taking him to the massive screens on Zolfa Thura where the plant being Meglos outlines it's plan to steal the Dodecahedron. He traps the Tardis in a chronic histeresis(time loop) and assumes the form of the Doctor.

Oh look, it's the return of our old favourite, the Doctor's double. See also: The Chase, The Massacre, The Enemy of the World, Android Invasion, Face of Evil, and the very end of the previous story The Leisure Hive!

We also have companion duplicates also in Inferno, Terror of the Zygons, Android Invasion and Androids of Tara! 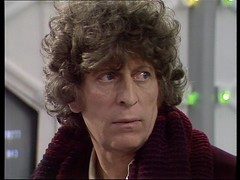 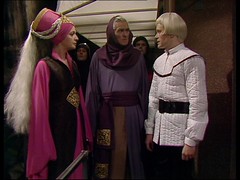 Is this the first story where the Doctor hasn't arrived by the end of the first episode? Quite possibly. A lot of mucking about on Tigella setting the situation up, the bandits plotting with the plant to steal the Dodecahedron and all the time the Doctors & Romana are stuck in the Tardis, and for the last third of the episode they're repeating the same actions which gets increasingly annoying! 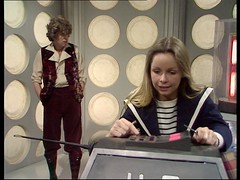 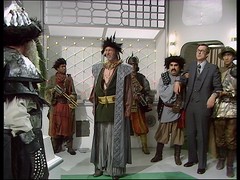 See the walls of Meglos' command centre? Yup, it's the triangular/hexagonal pattern first seen in The Mutants again. Last seen in Horns of the Nimon, they'll be around a lot for the next few years.

Playing High Priestess Lexa is Jacqueline Hill who had previously appeared in Doctor Who as one of the first companions, Barbara Wright, from An Unearthly Child to The Chase. Prior to Doctor Who she had appeared in Out of This World playing Lil Harmon in Medicine Show. She was married to television director Alvin Rakoff and died on 18th February 1993.

This is the first and only time a former companion returns onscreen in a different role. Peter Purves (Steven Taylor), Nicholas Courtney (The Brigadier), John Levene (Sgt Benton) and Ian Marter (Harry Sullivan) all played roles in the series before they appeared as companions. In addition K-9's voice actor John Leeson appears in another role during his time as K-9 and does provide a voice for a later Doctor Who story. 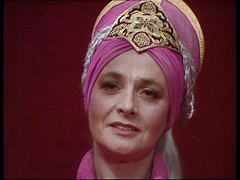 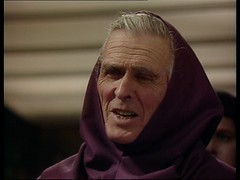 Playing Zastor, leader of the Tigellans, is Edward Underdown. He'd appeared in the surviving Doomwatch episode You Killed Toby Wren playing the Chairman of Tribunal, which you can see on The Doomwatch DVD, and plays Frank Garner in three episodes of Survivors: The Peacemaker, Sparks & The Enemy.

This is the only four part Doctor Who story where all the credited cast are in every episode. The only other multi-part story this is true for is the 2 part Edge of Destruction. There are plenty of uncredited cast too though who aren't in all the episodes!

Of Lexa’s Deons, who don't appear in the second episode, Eddie Sommer was a Mutant in The Mutants, and a Servant at the Ball in Masque of Mandragora. In Blake's 7 he's a Helot in Traitor and in The Hitchhiker's Guide to the Galaxy he's the Magrathean Robot in episode 4.

Ray Knight was the UNIT Soldier in the bunker in Robot, a Sorenson Monster in Planet of Evil, a Man in Image of the Fendahl, a Mentiad in Pirate Planet and one of the Pangol Army in The Leisure Hive. He returns as The Policeman (with bicycle) in Logopolis, a Trion in Planet of Fire, a Guard in Vengeance on Varos, and one of Glitz's Crew in Dragonfire. He appears in Blake's 7 as a Federation Trooper in Countdown, a Rebel in Rumours of Death and a Federation Trooper in Warlord.

Terence Creasy was a Crewman in Nightmare of Eden and would have been a Young Scientist in Shada. He was in Blake's 7 as a Kezarn Native in City at the Edge of the World and a Rebel in Rumours of Death. In Hi-de-Hi! he plays Yellowcoat Gary.

I can't find Deon Chris Marks on IMDB or spot another Doctor Who appearance for him. Deon elder Stephen Nagy is similarly evasive and the best guess I have for elder Lewis Hopper is that he's the Lewis Hooper who's a Gallifreyans in Arc of Infinity. Sylvia Marriott we can place: she's in Never Say Never Again as a French Minister.