"Despair is the death of hope, and all our hope died years ago."

The aged Doctor is taken to a cabin by Romana, where Pangol has their movements restricted, arguing that the Doctor is still on trial for murder. Mena hints that technology once held hope for the Argolin before. Pangol reveals to Mena that the experiments were faked. The Doctor ponders why Pangol is the only young Argolin. He and Romana deduce the Tachyon generator has a second function. Hardin asks the Doctor & Romana for help as the Doctor wonders if the Recreation Generator isn't a Re-Creation Generator. Pangol rejects the Foamasi offer document and reveals to Brock that he is the child of the generator. The Doctor distracts the Argolin so Romana can examine the Generator. Pangol detects their presence and sounds an alert. Romana is rescued from the Generator by a Foamasi who shows the Doctor a device they found within the Generator. Seeing someone on the monitor the Foamasi hurries off followed by the Doctor & Romana . Reaching the boardroom it attacks Brock, ripping his face off to reveal a Foamasi underneath....

I'm struggling with this story anyway but there's a obvious problem in this episode: Tom Baker's performance is not old enough. It's almost the same as usual, just a little slower in places and a little more subdued and doesn't match what we see on the screen in terms of the aged Doctor makeup. 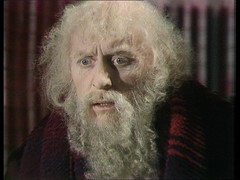 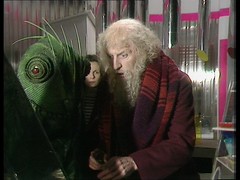 OK then: Masque of Mandragora establishes the Tardis translates speech for the Doctor and his companions (and us?) so why can't Doctor understand the Foamasi?

Lots of revelations this episode. We already knew that Hardin's experiment was faked and that now gets revealed to the Argolins. The real surprise here is the true purpose of the recreation generator:

MENA: Your West Lodge can raise that much money?
BROCK: Easily.
PANGOL: We don't need it. I have something better than money.
BROCK: A novel concept.
PANGOL: Manpower.
BROCK: Excuse me for reminding you that this is a sterile planet. There haven't been any Argolins born here since the war.
PANGOL: Which was forty years ago. But how old do you think I am, Mister Brock? 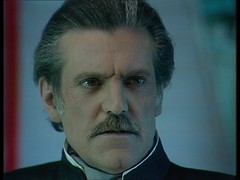 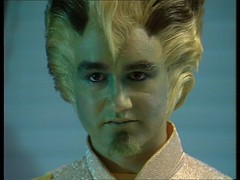 MENA: No, Pangol! No!
PANGOL: It's time you understood, Mister Brock. You must be more stupid than you look. Mena is not my mother.
MENA: No, Pangol! You've said too much already.
BROCK: You mean you're not an Argolin?
PANGOL: Of course I'm an Argolin! The first of the new Argolin. I am the child of the Generator.


BROCK: You mean the Argolins donated cells from their bodies to this Recreation Generator and cloned themselves? There's a flaw in your story. Where are all the others?
MENA: The theory was still primitive. There were many failures.
BROCK: And yet he survived.
PANGOL: For twenty years a moratorium was declared on the technique, until I came of age, a thoroughly proficient tachyon engineer. There will be no more disfigured mutants in our next reduplication programme.

PANGOL: With Mena's death, the future arrives. The Children of the Generator will rise to claim their inheritance!

Then we finally get to see the creatures we've seen sneaking round the Leisure Hive: They're revealed as the Argolins ancient enemy the Foamasi which leads to the episode's final revelation that Brock is another Foamasi in disguise! 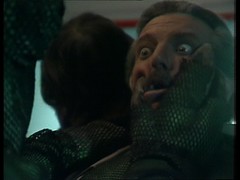 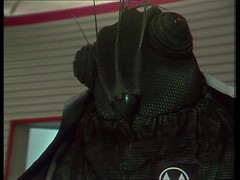 One thing I loved about this episode, and the whole story, is the fabulous music within. It's been issued on CD, but sadly is long out of print, but thank the Lord the DVD has an isolated music option!. So I'm sitting here listening to the music for the episodes as I write this.

Douglas Adams, for all his marvellous qualities, may not have been the best script editor the show has ever had. (For my money that's Terrance Dicks.) I think he did a decent job fleshing out whatever Terry Nation gave him for Destiny of the Daleks (your mileage may vary with that statement) but even there he missed a vital error in the plot that the Daleks aren't robots. Gradually as the season went his attention was drawn elsewhere and as a result when new producer John Nathan-Turner and script editor Christopher H. Bidmead took over the script cupboard was bare of usable scripts. The first two stories into production this year were The Leisure Hive, from an idea David Fisher had had about aliens running a holiday camp, and State of Decay by Terrance Dicks, which had effectively been sitting on the shelf for three years since when it had been cancelled while it was known as the Witch Lords.

The stories for the first half of this season were made in this order:

But their order on transmission was somewhat different:

Apart from these two stories recorded first all the writers for this first new season of Doctor Who are new. The evidence seems to suggest that this is a conscious "new broom" choice by the production team as no director that has previously worked on the series gets used this year either. Terrance Dicks will return in a few years time as will another former script editor Robert Holmes. Similarly of all the directors used on the series before the Leisure Hive director only one ever returns and that's Pennant Roberts, who directed the unfinished Shada that closed the previous season and returns to take charge of Warriors of the Deep and Timelash
Posted by Philip Ayres at 07:00