The Doctor escapes from the Tachyon Generator, what Romana saw having been just a Tachyon projection. The Doctor is taken to meet the newly arrived Hardin & Chairwoman Mena: he is persuaded into assisting the scientist Hardin. Mena explains to the Doctor & Romana about the 20 minute war that devastated her world and how the hive was set up to give them shelter and promote understanding between species. Another fault occurs, leading Mena to explain that there have been a number of recent faults and they suspect sabotage. She tells them that the Argolins are sterile as she herself begins the process of dying. Hardin refuses to demonstrate his process for Brock and tries to keep the Doctor & Romana away from the equipment. When Romana tells Hardin the equipment could be used to save Mena's life he confesses that his experiments don't work and he had been forced to pretend otherwise by backer Stimson. Stimson seeks out Brock, but finds a skin suit of Brock's lawyer, Klout, hanging in the cupboard. Stimson is killed by an unseen creature. The Doctor interrogates the Tachyon Generator's computer before being summoned: the Argolins have found his scarf wrapped round the neck of Stimson's corpse. Hardin's modified equipment struggles even with Romana's modifications. It temporarily runs back an hour glass but once unobserved it explodes. The Doctor is tried for Stimson death. Pangol is suspicious of Hardin's work and the Doctor volunteers to test the modifications to the Tachyon Generator having a couple of decades shaved off his age. Romana finds that the test failed but is too late to stop the test the Doctor is involved in: when the Tachyon Generator is opened the Doctor is incredibly aged. 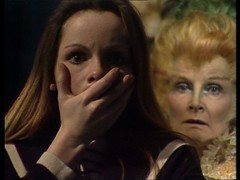 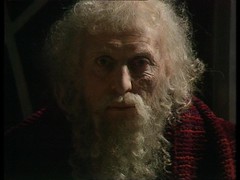 The aged Fourth Doctor is a very good cliffhanger shock and a decent bit of make up!

That ticked along nicely while I watched it but now a few hours later there's little that stands out. Yes the business with the scarf is quite funny, but it sticks out in the new, humour depleted version of Doctor Who:

Brock: His scarf killed Stimson!
The Doctor: Arrest the scarf then! 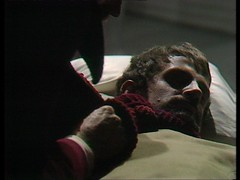 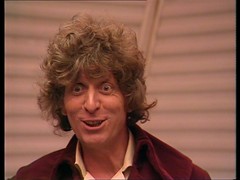 However coming in at 20m50s, that's quite a short episode! Especially when you consider that there's 30 seconds of opening titles at the start, another minute of recap, 10 seconds of repeating the shuttle shot for the third time, and that end titles crash in 1m20s from the end. So just 17m50s of new footage!

Joining new producer John Nathan-Turner is script editor Christopher H. Bidmead (who you can follow on Twitter). Nathan-Turner and Bidmead both wanted a much more serious version of Doctor Who, feeling that in recent times it had all got a bit too silly. While the appearance of the Major Bloodnok's Stomach sound effect in Horns of the Nimon is a step too far, I don't think the humour in general was too much. I certainly don't think that the Nathan-Turner/Bidmead version of Doctor Who was quite what the public were looking for at the time. In fact, in the wake of the summer's release of The Empire Strikes Back what I think they wanted was spectacular space battle. And, as we saw last episode, Buck Rogers in the 25th Century was serving that up on the other side and had nicked a further 0.9 million of Doctor Who's viewers between last week and this.

Don't get me wrong, I'm not taking against Bidmead and Nathan-Turner this early just for the sake of it. In fact three of my favourite Doctor Who stories make up the tail end of this season. I'm just not sure they were making the right choices to start with, so not giving what the public was expecting, IE The Tom Baker show, and indeed what they really wanted, dramatic space battles with lasers. If anything I think ESB was more of a game changer for Doctor Who than Star Wars was. Following Star Wars, Doctor Who had 3 very successful years. Following ESB it got destroyed in the ratings, couldn't do sci fi humour because Douglas Adams was doing it with Hitch-hikers, couldn't do the effects to Star Wars standards because it didn't have the money did and, partly as a result of loosing it's family audience to Buck Rogers & partly through wanting to be more serious, ended up appealing to a more niche fan market. Around this time Ian Levine's hanging round the production office and becomes the series unofficial continuity adviser, further moving the show into the fans territory and out of the area of family drama appealing to the general public. This will cause problems further down the line the root of which are some of the decisions being made here. But, given where the new production team find themselves, they aren't necessarily the wrong decisions at the time....

We mentioned Nigel Lambert's role as the narrator of Look Around You when his very similar voice over unintentionally spoiled our viewing of episode one. Again if you've not Look Around You, or don't own a copy, then buy one now as it's fabulous. You can see his character Hardin clearly for the first time this episode - he was only vaguely visible in a video in the previous episode. He has a lengthy CV and is one of those actors I keep spotting in odd places: he was in the surviving first season Out of the Unknown episode Come Buttercup, Come Daisy, Come......? as the Milkman and you can see that on the Out of the Unknown DVD Set. He's got two appearances in The Avengers to his name in The Master Minds as Lt. Hardcastle and The £50,000 Breakfast as the 2nd Doctor. He can be seen in UFO as a Moonbase Operative in Computer Affair and is in the first episode of Blake's 7 The Way Back as the Computer Operator. 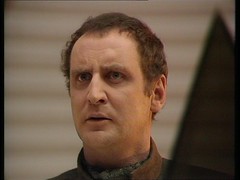 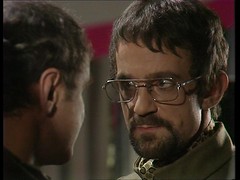 David Allister plays he ill fated Stimson. He returns in The Trial of a Time Lord: The Terror of the Vervoids as Bruchner. He#'s got an Out of the Unknown on his CV too playing Fuller in the missing fourth season episode The Uninvited. However the complete audio for this episode exists, one of the few Out of the Unknown episodes for which this is the case, and is also on the DVD set.

Adrienne Corri plays Mena: she was in the UFO episode The Square Triangle as Liz Newton. 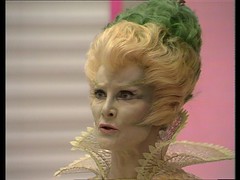 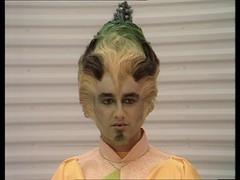 Mena's son Pangol is played by a young David Haig. His career isn't that old but he's already appeared in Blake's 7 as Forres in Rumours of Death. Nowadays he's a familiar face on television but is probably still most recognisable as playing Bernard, the Groom at the second wedding, in Four Weddings and a Funeral.

Brock, who spends most of his brief appearances this episode with his back to the camera, is played by John Collin. You can see him in The Sweeney as Parish in Contact Breaker. 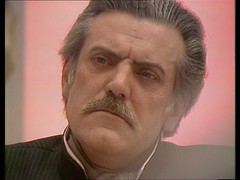 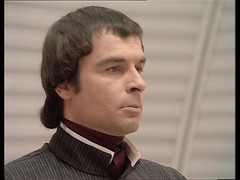 His silent assistant Klout, whose skin appears to be hanging in Brock's wardrobe, is played by Ian Talbot who was in The Silurians episode 4 as the technician Travis. According to IMDB he was awarded the O.B.E. in the 2008 Queen's New Years Honours List for his services to drama as the former Artistic Director of the Open Air Theatre in Regent's Park in London.

Roy Montague plays an Argolin Guide but I've not seen him in anything but there's more Argolin Guides from this episode onwards that we do know:

Kenneth Sedd had been a Wheel Crewmember in The Wheel in Space, a Bi-Al Member in The Invisible Enemy and should have been a Young Scientist in Shada. He returns as one of the Airport Management in Timeflight and a Guest Gambler in Enlightenment. He's also in Doomwatch as a Man in You Killed Toby Wren, Flight Into Yesterday, The Inquest & The Logicians, a Barman in High Mountain and a Man in Club in The Killer Dolphins. He appears in our favourite Adam Adamant Lives! episode D for Destruction as a TA Soldier and in A Sinister Sort of Service as an S.S. Guard. He was a long term associate of comedian Benny Hill appearing frequently in his programs.

Mary Rennie was a Kitchen Hag in The Time Warrior, a Villager in Planet of the Spiders and a Peasant & Traveller in The Masque of Mandragora. She returns as a Traken Citizen in Keeper of Traken, one of the crowd in the Marketplace in Snakedance and as a Citizen/Unbeliever in Planet of Fire.

Mike Reynell was an Exillon in Death to the Daleks, a SRS Bouncer/Officer/Audience member in Robot, a Scientist in Genesis of the Daleks and a Council Member in Face of Evil. In Blake's 7 he was a Prisoner in Space Fall while in the The Fall and Rise of Reginald Perrin he was a Restaurant Patron in Elizabeth's New Admirer. He accomplishes a rare treble by appearing in all 3 Sweeney productions: In The Sweeney (Television series) he was a Customs Officer in Golden Boy, in the first Sweeney! film he was a Detective, a role he repeats in Sweeney 2. In other films he appears in Carry On Abroad as a Holiday Maker, The Empire Strikes Back as an Imperial Officer, the Roger Moore James Bond film Octopussy as an Auction Patron, Morons from Outer Space as the Policeman Collecting Matteson and A Fish Called Wanda as a Man in Street.

There's two voices heard in this story: The voice of the Generator is Clifford Norgate who provided the voice of the Nimon in the previous broadcast story The Horns of Nimon.

Harriet Reynolds is the Tannoy Voice: you can see what she looks like in A Very Peculiar Practice: A Very Long Way from Anywhere where she plays the chancellor's wife Deirdre Hemmingway. She's also in Jeeves and Wooster as Harriet in Bertie Takes Gussie's Place at Deverill Hall. IIRC this was the story that the BBC had a complaint for for their use of the word Tannoy due to it being a registered trade mark!