"I was, I am, I will be, Professor Chronotis. Oh dear. We Gallifreyans have never managed to come up with a satisfactory form of grammar to cover these situations!"

Chris & K-9 are transported out their cell and detecting them the ship re-activates it's oxygen supply. The Tardis arrives at the Krarg carrier ship and Romana sees the Krargs being grown. Another Krarg starts to form on Skagra's ship. The Doctor boosts the ships power to enabling it to cross the distances of space quickly. In Professor Chronotis' rooms Clare awakes and is startled by the appearance of the Professor, dressed in a night shirt. Skagra finds himself unable to translate the book using the Doctor's mind in the sphere. The Professor explains to Clare that his rooms are his Tardis and it interfered to save his life. The Professor decides they must find Skagra to save the book, which is the key to Shada, the Time Lord prison which has been forgotten about. The Doctor & Chris are attacked by a Krarg, but it is held off by K-9 allowing them to explore the Think Tank complex at which they have arrived. They find the ages bodies of Skagra's former colleagues. Skagra notices that turning the pages of the book influence the Tardis and realises turning the last page of the book will take him to Shada. He prepares to journey to Shada to find the Time Lord criminal Salyavin, who is crucial to his plans. The Doctor uses Chris' brain power to revive one of the scientists, the neurologist Caldera. He explains how Skagra set up Think Tank to pool the resources of the mind electronically but when they had completed the sphere he used it to steal their minds. Skagra now intends to use his mind to dominate the whole of humanity but need Salyavin to complete his plan. K-9 looses his fight against the Krarg and is driven into the Think Tank by the massive creature which now advances on the Doctor..... 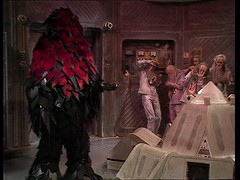 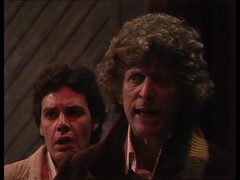 OK, is anyone able to explain to me just how & why Chris and K-9 are transported out of their cell? It appears to just happen for no reason at all! It had bothered me previously and neither the script book nor the 2017 version clear things up at all!. Chronotis' survival is rather brushed over, but seemingly accredited to his Tardis. I can get that Skagra notices that the book affects the Tardis, but turning the last page will cause the Tardis to travel to Shada? That's a bit of a leap. I think this episode could have done with another pass over it by the script editor.... except the script editor is in this case the author!

The computer on Skagra's ship is voiced by Shirley Dixon who'd been in the Doomwatch episode You Killed Toby Wren as Dr. Judith Lennox. You can also see her in The Professionals: You'll Be All Right as Mrs. Johnson and Inspector Morse: Last Bus to Woodstock as Margaret Crowther. 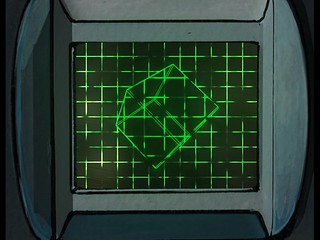 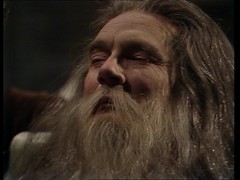 Playing the Think Tank scientist Doctor A St John D Caldera is Derek Pollitt who was Driver Evans in The Web of Fear and Private Wright in Doctor Who and the Silurians. His brother was the actor Clyde Pollitt who appeared in The War Games as a Timelord and returned as the Chancellor in The Three Doctors.

The Older versions of the other Scientists - A S T Thira, G V Santori, L D Ia & I Akrotiri - are mainly played by familiar names but we don't know which is which!

Ernest Jennings was the 1st Man in Market in The Romans and a Highlander in jail in The Highlanders. He returns as a Peasant in Village Centre in State of Decay, and the aged rebel Fern in Trial of a Timelord Mindwarp. 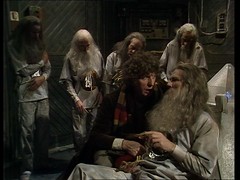 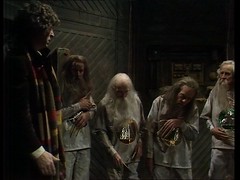 Johnny Clayton was a Planetarian in Mission to the Unknown: Delegate Detective think he was Celation. He returns as a Lazar in Terminus and a Guard/Bearer/Alphan/Huge Alphan/Linna in Trial of a Timelord Mindwarp. In Rentaghost he was William Shakespeare in the third episode of the second series, still unreleased on DVD! He was in the first episode of EastEnders as murder victim Reg Cox.

Max Mundy was in Blake's 7 as a Cabin Bounty Hunter & Federation Trooper in Blake while John Dolan has no other Doctor Who appearances to his name.

We finally get a decent look at a Krarg in his episode! The one that appears on screen was recorded as part of the first filming block and is played by Derek Suthern who first appeared as a Path Lab Technician in The Hand of Fear, followed by a Mentiad in The Pirate Planet, a Gracht Guard in The Androids of Tara and a Mute in The Armageddon Factor. He's in this season 3 times as a Guard in Creature from the Pit and a Mandrel in Nightmare of Eden before his appearance as a Guard in The Horns of Nimon. This would have made a fourth appearance if the story hadn't have been cancelled. That also deprives him of appearances in five consecutive Doctor Who stories as he then plays a Argolin Guide in The Leisure Hive, the first story of the next season. He returns at the end of that season as PC Davis in Logopolis part one followed by playing a Cricketer in Black Orchid and a Man in Market in Snakedance. In Blake's 7 he was a Federation Trooper in The Way Back, a Scavenger in Deliverance, a Federation Trooper in Trial & Countdown, a Customer / Gambler in Gambit, a Hommik Warrior in Power and a Space Princess Guard / Passenger in Gold. He appears in the Roger Moore James Bond film The Spy Who Loved Me as an Atlantis Guard and is in Fawlty Towers as a Hotel Guest in both The Germans and The Psychiatrist. 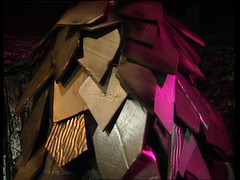 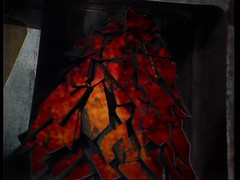 The Krargs who missed out having their material recorded are:

Reg Woods who had been a Palace Guard in Androids of Tara, and a Bearer in Creature from the Pit He then played a Pangol Body Part & Member of Pangol Army in The Leisure Hive and a Guard in State of Decay. He recorded his part as the Policeman at the Station i Black Orchid only to have it cut fro the final program! He then returned as a Security Guard in Timeflight and a Member of Striker's Crew in Enlightenment. In Blake's 7 he's a Scavenger in Deliverance, a Rebel in Voice from the Past, a Menial in Ultraworld, a Space Rat in Stardrive and a Space Princess Guard / Passenger in Gold. He's also in The Professionals episode Black Out in what IMDB describes as "Bit Part" and the Fawlty Towers episode The Kipper and the Corpse as a Hotel Guest.

Lionel Sansby was a UNIT Soldier in the Silurian, one of the Complex Personnel in Hand of Fear and a Passenger in Nightmare of Eden. He returns as a Cricketer in Black Orchid, a Passenger in Time Flight, one of the Men in the Cave Crowd in Snakedance, and as a Lazar in Terminus. In Blake's 7 he was a Federation Trooper in Seek-Locate-Destroy and in Doomwatch he was a Man in No Room for Error.

James Muir also should have played a Krarg in the studio: see episode 3 for his credits where he appears as the man fishing.

We've got a nice shot of the chamber used to create the Krargs courtesy of the photo gallery on the 2013 DVD so you can see what the animation team came up with is a close match: 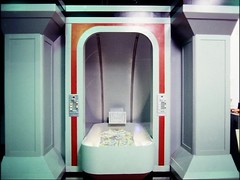 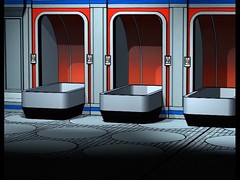 I rather like the effect of the Krarg forming in it: 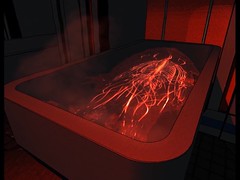 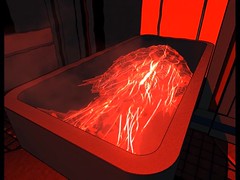 It's also interesting comparing the effects used for the void behind Professor Chronotis' room: 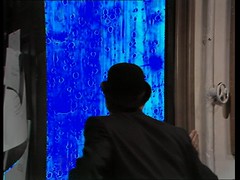 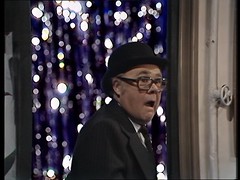 The first attempt at using the Shada footage was made by new Doctor Who producer John Nathan-Turner, but having secured funding for two extra episodes for the forthcoming season, to avoid having to make a new six parter, the BBC were reluctant to give him more money to finish Shada as well. With the departure of Lalla Ward and then Tom Baker from the show any possibility of finishing the story vanished.

In 1983 the footage that had been filmed was combined into a version of episodes 1 & 2 constructed by fans Ian Levine, Richard Landen, James Russell and Kevin Davies for the DWAS Panopticon 3 convention September 3rd and 4th. That same year the Shada footage provided the scenes of the Doctor & Romana punting from episode 1 and The Doctor being rescued from beneath a fence gate from episode 3 to give Tom Baker some presence in the 20th Anniversary story The Five Doctors.

Ideas for releasing Shada on video started circulating as early as 1984 but nothing came of it till the Doctor Who - Shada was released on VHS on July 6th 1992. Douglas Adams was reluctant for the material to be released and was only convinced by an offer to donate his royalties to Comic Relief. Tom Baker provides the narration to accompany the story whose single video is accompanied by a book reproducing the complete script for all six episode. The VHS version of Shada was released on DVD along with the expanded version of the documentary Thirty Years in the Tardis.

Shada was the BBC's first attempt at filling the gaps in a missing story: narration was later on the videos of The Invasion & The Crusade to cover for missing episodes. The Crusade, and later the Ice Warriors, also include CDs of the missing episodes (an option obviously not available here since the episodes were never finished). The Ice Warriors also includes an abridged Telesnap reconstruction of it's missing material: a full telesnap reconstruction married to the Soundtrack would be used in place of the missing Tenth Planet episode 4. When the Invasion was released on DVD, it's two missing episodes (for which no Telesnaps exist) were animated, a technique shortly due to be used on Reign of Terror. At some point Ian Levine started working on an animated version of Shada with the hope of getting the BBC to release it. If you want more detail Google Ian Levine Shada .....

In 2003 a complete, alternate, audio version of the story was released by Big Finish on CD starring Paul McGann as The Doctor and featuring Lalla Ward as Romana. The BBC produced a version of this with Flash animation which can be seen on their website.

In 2017 the BBC announced a new version to be released on DVD, Blu-Ray and limited edition steelbook Blu Ray. This married the existing footage to new animation with the voices provided by the original cast where possible. Since this involves both Tom Baker & Lalla Ward to my mind this make it the definitive version of Shada.

Two days after this episode was planned to be broadcast the Blake's 7 episode City At The Edge Of World was shown.