"We will return to the carrier ship. From there a fleet of small craft will take each one of you to selected centres of population, and then the great mind revolution shall begin!"

K-9 fires at the Prisoners, driving them back but he is thrown aside by a Krarg. The Doctor, Romana & Clare grab K-9 and flee to the Professor's Tardis. Romana reminds the Doctor that his mind is inside Skagra's machine too. Skagra returns to the Tardis and tells the former prisoners that they will return to the carrier ship and be distributed through the universe to further his revolution. The Doctor follows his Tardis in the Professors, capturing it in a force field, and has himself placed into the Time vortex. The Doctor begins crossing to his Tardis, but his journey appears in vain when an accident occurs in the Professor's Tardis deactivating the forcefield, throwing the Doctor into the vortex. The Doctor finds himself in a room in his Tardis and starts building a helmet shaped device. The Professor's Tardis arrives on the carrier ship, as the Doctor reveals himself and struggles for control of the joint mind. Romana deactivates the Krarg generating equipment, tipping the gas contained within out and using it to destroy the Krargs. Skagra flees to his ship, but is taken prisoner by his ship's computer who has now decided to serve the Doctor. The Doctor promises to return the prisoners to Shada and summon the Time Lords. The Doctor returns both his and the Professor's Tardis to Earth, confusing the college Porter who returns with a policeman to find the room now back in it's usual place and the Professor taking tea with his guests. 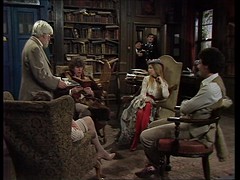 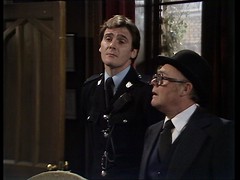 As a dramatic production very little original 1979 material exists from episode 6, just the scenes in the Professor's room/Tardis, Skagra's ship's brig and the brief college exterior. The climatic battle in Shada itself is completely absent and without it on the VHS version you're relying on the narration which works better here than at any other point in the story. So the animators for the 2017 DVD version have had to do a lot of work here. They've had a bit of fun too: the shelves in the Tardis store room are loaded with goodies from previous stories and other shows: I can spot the time disturbance detector from The Time Monster, a Laserson Probe from Robots of Death, Polyphasavatron from Pirate Planet, a Movellan gun & Dalek bomb from Destiny of the Daleks, Blue Crystals from Metebelis 3, Erato's communication device from Creature from the Pit and the Trilogic Game from The Celestial Toymaker on one set of shelves while on the top of the others is Orac from Blake's 7! 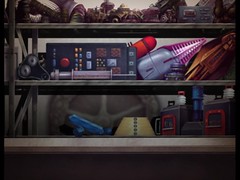 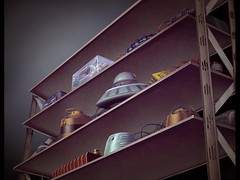 I do have to question the choice the animators made of where Skagra materialised on his ship: he's in a set that looks just like the ship's brig and it's easy to think he is in the cell when you first see it: 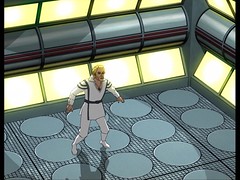 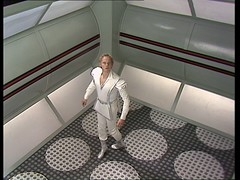 Why go to the trouble, and money, of animating this and confusing people when they could have just used the ship's bridge seen in earlier episodes? 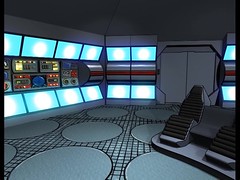 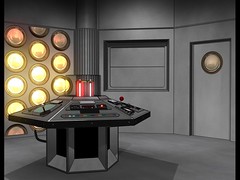 Their Tardis is nice, evocative of the era, but a little too dark on the walls and bright on the roundels. I would have dearly loved the original Tardis scenes to be filmed, they might have pushed what remained into a much more coherent narrative flow.

The 2017 version does have a special little treat for us right at the end with a present day Tom Baker appearing in costume as The Doctor in a brief console room scene! 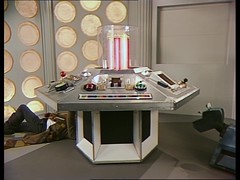 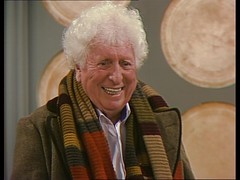 One of the choices made for the 2017 version is to present is as a Movie length version, I suspect to conceal the uneven episode lengths! As such we don't get to see the end titles until the very end of the DVD. I found them difficult to look at: after the actors have appeared normally as captions which replace each other the rest of the credits are presented as upwards scrolling text over a background which is scrolling in. The resulting movement contrast did bad things to my head!

We also get to see one new actor this episode: John Hallet John Hallet plays the Police Constable that the Porter Wilkin calls to investigate the disappearance of Professor Chronotis' room. Hallet had previously appeared in Survivors playing Barney in Starvation, Spoil of War & Law and Order. 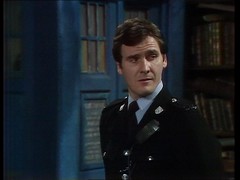 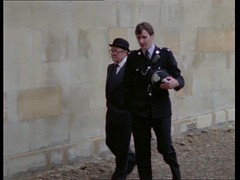 I am led to wonder why the production took him on location for one brief scene? Surely it would have been easier to book him for the studio and set all his scenes in the corridor outside Chronotis' room!

We return to Douglas Adams' fifth novel Dirk Gently's Holistic Detective Agency. Set in St Cedd's College Cambridge it features a Professor Chronotis who has been living in the same rooms in Cambridge for 300+ years which also double as his time machine. He's got problems with his memory and likes to tease visitors with how many lumps of milk he'd like in their tea. I think we can see where Douglas sourced that from! And, as we pointed out during City of Death, the backbone of the plot involves an alien race who's spaceship tries to take off on prehistoric Earth kickstarting the process of life leaving one of their number to try to reverse the situation. Essentially Dirk Gently's is a "Cut & Shut" job on two of Douglas Adams Doctor Who stories, albeit one with a considerable amount of work done on the detail. I re-read it in the run up to doing these particular stories and was astounded at the similarities but I also found it one of the best of his novels, right up there (for me) with So Long, and Thanks For All The Fish.

So what do we make of Shada? From what I can gather from the script & remaining video it's not quite up to Adams' previous works for the series, Pirate Planet & City of Death, both of which are personal favourites. Doing Shada for the blog has given me a better feel for the story but even then it does rather vanish at crucial points. The first two episodes on the VHS version feel like proper Doctor Who episodes but after that it feels more like a jumble of bits..... which is essentially what it is! The script book, which I'd never read before my previous viewing, did help to fill in the gaps and you can hear Tom speaking some of the dialogue which would have added a sparkle to something that, in all honesty, seemed a little flat especially compared to the two Douglas Adams stories that went before it. It's only really come alive for me as a complete story with the 2017 DVD edition. The gaps are filled in adequately. This is probably the best animation since The Invasion and in both cases they're animating something for which no known photos exist which helps avoid comparisons to surviving photos and telesnaps. As I said previously, using Tom Baker & Lalla Ward to provide the voices for The Doctor & Romana adds a lot to this production and for me makes the 2017 DVD the definitive version of Shada and now I can see it as a full length story I think it probably would have made a fitting climax to the season that otherwise runs some six episodes short of the usual length.

This is the last episode of Doctor Who written or script edited by Douglas Adams. As Season 17 had progressed so the success of The Hitch-Hiker's Guide to the Galaxy had grown. A second radio series was in the works, a record was on the horizon as was a TV series. Plus the novel of Hitch-hikers had sold by the bucketload..... Douglas Adams went on to write 4 more Hitch-hiker's books, 2 Dirk Gently novels and several other works. He emigrated to America, where he died of a heart attack on May 11th 2001. 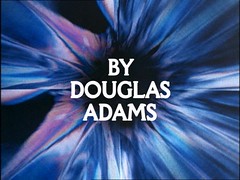 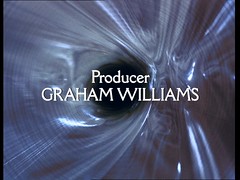 This is also the last episode of Doctor Who produced by Graham Williams. He left the BBC in the 1980s going on to produce television shows for ITV including Supergran. In 1985 he had submitted a story to the then production team entitled The Nightmare Fare, and featuring the Celestial Toymaker, which was in pre-production at the point the series was "put on hiatus" for 18 months by the BBC. In the late 1980s he left the television industry to run a hotel in Tiverton, Devon, which was where he was killed in a shooting accident on 17th August 1990.

Regular Doctor Who composer Dudley Simpson was scheduled to write and record the music for this episode but in the event he performed no work on the story. Along with many other long term creative personnel his services were dispensed with by incoming producer John Nathan-Turner and he didn't work on the program again. The music for the VHS version provided for the VHS version by Keff McCulloch wasn't similar to the style used on the series at the time and has been widely criticised over the years so the 2017 version features a new score by Mark Ayres in the style of Dudley Simpson and owing a debt to some of Simpson's contemporary work on the show, notably City of Death. Simpson himself died in 2017 and a caption tribute to him appears on the 2017 DVD: 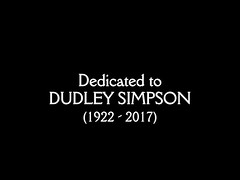 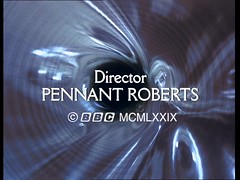 Of all the directors who worked on Doctor Who before John Nathan-Turner became producer, this story's director Pennant Roberts is the only one to return to the show in later years taking charge of 1984's Warriors of the Deep and 1985's Timelash.

Two days after this episode was planned to be broadcast the Blake's 7 episode Rumours Of Death was shown.


In 2017 M'learned colleague Mr Richard Bignell listed the running times for the material recorded in 1979 for each episode of Shada, including title sequences, for Roobarb's DVD Forum and came to the conclusion that

"If you take the ideal BBC-specified episode length of 24' 30" as the norm, the total running time for a six-parter would be around 147 minutes."

As we have previously said during episode 5, Shada was finally novelised in 2011 by Gareth Roberts. The recorded sections were released on video in 1993. The Doctor Who Legacy DVD boxset uses the VHS version along with new bonus material and pairs the story with the 1993 documentary 30 Years In The Tardis and was released on 7th January 2103. In 2017 the BBC announced a new version marrying the existing footage to new animation with the voices provided by the original cast where possible. This was released on DVD on 4th Decemeber 2017, but unfortunately the DVD version contains a framing error where the new material is pillarboxed in 16:9 rather than being in the original 4:3. The same day a Blu-Ray of the same title was released alongside a limited edition steelbook Blu Ray containing both the new 2017 release and the previous 2013 version.