"Dead men do not require oxygen!"

Romana arrives in the Tardis, rescuing the Doctor. They return to Chronotis' rooms where Chris reports the professor's body just disappeared. The Doctor decides he needs to speak with Skagra. K-9 tracks the sphere to Skagra's ship. Clare, worried about the danger the book may represent, comes to Chronotis' rooms to find them empty. The Tardis materialises in an apparently empty field where Skagra's invisible ship is. They are allowed to enter the ship where Skagra takes them prisoner. Skagra tells them he was only interested in Chronotis' mind. He tries to force the Doctor to decode the book and sets the sphere on him to take his mind. K-9 is unable to blast his way out of the cell he, Romana and Chris find themselves in. K-9 picks up the sphere's signals and is able to detect the Doctor amongst it's voices. Romana is transported from the cell and taken to the Tardis by Skagra who forces her to take it. While searching the Professor's rooms for the missing book Clare finds a number of concealed control panels and she accidentally triggers an explosion. The Doctor awakens on the ship and explains to it's computer how he survived, with the sphere merely taking a copy of his mind. The College Porter comes to the Professor's rooms, but when opening the door doesn't find the room there but instead the swirling time vortex. The Doctor attempts to persuade the ship to release him and his companions but instead it decides the sphere must haves succeeded in it's task and killed the Doctor so to conserve resources it turns off the Oxygen supply...... 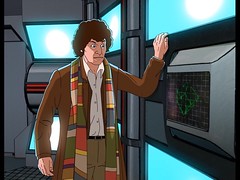 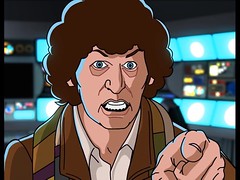 For the first time this episode *really* flags missing some crucial material. Before there were just holes, now there's whole chunks of plot missing. I'd always been a bit confused by the narration at the end of the episode so the last time I watched it I turned to the script book and it makes it a lot clearer, showing the Doctor trying to trap the computer into doing something silly. It's a typical piece of Tom fast talking and the narration in no way does it justice. It comes over much better now the scene has been animated for the DVD: 2017 DVD version

Having conducted location filming from 15th - 19th October 1979, the cast reconvened in Television Centre 3 from 3rd-5th November 1979 for the first studio book which included all the Think Tank material, the scenes in Skagra's ships brig/cell and the substantial number of scenes in Professor Chronotis rooms for all six episodes. On November 15th & 16th model work was done at Ealing before the second studio block on November 19th & 20th in TC6 and the third on December 1st - 3rd in TC1.

After conducting rehearsals on the morning of November 19th cast and crew returned to the studio and discovered they had been locked out as part of an industrial dispute between the unions and the BBC.

The dispute lasted until 30th November 1979 but by that time there was a rush for studio space to complete the BBC's Christmas programming for that year. Studio space could not be found until January, just before Shada was due to be aired (the first episode should have gone out 19th January 1980), which would not leave enough time for the post production work to have been completed. Reluctantly the production was cancelled.

While the main cost to episodes 1 & 2 are the lab scenes, visible to the left of the studio photo above taken the day recording was interrupted, the material missing for this episode would have been either on the bridge or in corridors of Skagra's ship. These were animated for the 2017 DVD release and placed alongside the cell sequences filmed in Block 1, the only footage recorded onboard Skagra's ship, with the scenes set in Professor Chronotis' rooms. 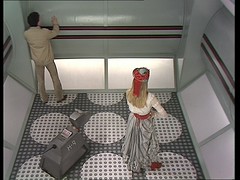 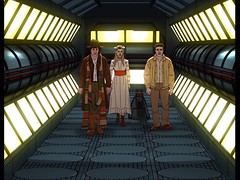 It's in this episode in that we first see recorded footage of Victoria Burgoyne as Clare Keightley, which is a little jarring as she just appears from nowhere during the video version. As the new version makes clear, if filming had been completed she would have had scenes in the lab with both Chris Parsons & The Doctor during the second episode. 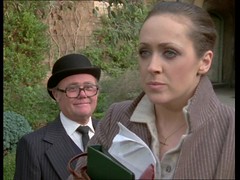 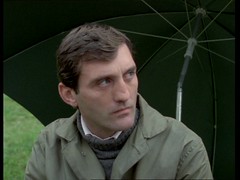 There's still no sign of the Krargs beyond the fleeting glimpse on the monitor at the end of episode 1 but James Muir, who IMDB reckons is a Krarg, appears in this episode as the Fisherman. He had previously been a UNIT Soldier in The Time Monster, a UNIT Soldier in Invasion of the Dinosaurs, a Muto in Genesis of the Daleks, a UNIT Soldier in Terror of the Zygons, a Brother in The Masque of Mandragora, a Death Attendant in The Sun Makers, a Technician in The Pirate Planet, from which a photo led to me spotting him here, a Druid in The Stones of Blood, a Louvre Detective in City of Death, a Mandrel in Nightmare of Eden. His appearance here means he's been in all three of Douglas Adams' Doctor Who stories. He would have appeared as the Krarg IMDB as him down as later in this story but those studio scenes went unfilmed. After this he was seen as a Foamasi in The Leisure Hive, a Gaztak in Meglos, a Tharil in Warriors' Gate and the Police Driver in Black Orchid. a Policeman in Time Flight and He returns as an RAF Driver in Remembrance of the Daleks. He'd been in Blake's 7 as a Federation Trooper in Seek-Locate-Destroy, a Phibian in Orac, a Rebel in Pressure Point, a Monster in Dawn of the Gods, a Link in Rescue, a Helot in Traitor, a Pirate Guard in Assassin & a Federation Trooper in Blake. He was the Vl'Hurg Leader i episode 4 of The Hitchhiker's Guide to the Galaxy and was a technician in Moonbase 3: Castor and Pollux. He was in The Professionals as a Police Man in Stakeout and Rentaghost as a Party Guest in the third series' fourth episode.

Two days after this episode was planned to be broadcast the Blake's 7 episode Harvest Of Kairos was shown.