While the Doctor & Romana search the Professor's rooms for the book, they discuss Time Lord law which brings to their mind the Time Lord criminal Salyavin, a boyhood hero of the Doctor. The Professor, when questioned on his contemporary Salyavin, recalls Chris Parsons' visit and wonders if he has borrowed it by accident. Chris and his friend Clare Keightley continue to analyse the book as the Doctor cycles across Cambridge to the lab. Skagra, now disguised in contemporary clothes, comes to the Professor's college seeking him. While Romana searches in the Tardis for milk so they can have some tea, Skagra arrives seeking the book and sets the sphere on the Professor stealing part of his mind. The Doctor meets Clare at the lab, and examines the book. Romana & K-9 find the collapsed Professor as Chris Parsons arrives. Using the Tardis medical kit Romana attempts to stabilise the Professor's condition. The Doctor & Clare discover that the book carbon dates to -20,000 years old. Skagra scans his copy of Professor Chronotis' mind for a trace of the book but finds nothing. The professor beats out a message to Romana on his hearts in Gallifreyan morse code telling her to beware of the sphere, Skagra and Shada but dies before he can reveal where the secret is. Skagra encounters the Doctor trying to return the book to the Professor and has a sphere pursue him, on a bike, through Cambridge. During the chase the book is dislodged from his basket and retrieved by Skagra. Forced to resort to running away on foot the Doctor is cornered by the sphere and attempts to escape under a gate, but the sphere approaches and begins to steal his mind...... 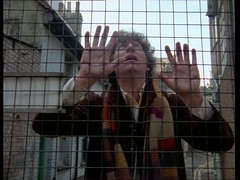 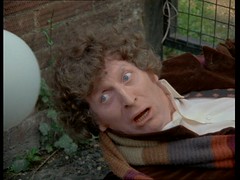 I see the Gallifreyan Morse code bit in this episode and I weep. Absolute nonsense. You're trying to stay alive and you do something that causes your body to fail? Deary me. Again the pacing and the music bother me, and again the only bits really missing are those of Chris, and now Clare, in the lab. Oh that they'd recorded them in the first recording block instead of the cell stuff seen in the next few episodes. The Doctor's line to Skagra, "I'm not mad about your tailor", seems very out of place now that Skagra's actually taken the trouble to blend in and he's wearing something reasonable... well for 1980 at least! I also wonder at the wisdom of introducing the Krargs at the end of the previous episode and then doing absolutely nothing involving them in this one, save for their appearance in the reprise! There's a few too many odd S names in this story: Shada, Skagra & Salyavin which makes it confusing!

The introduction on the VHS version has a rather large error concerning Victoria Burgoyne, who plays Clair Keightley: This wasn't her first television role, as Tom Baker jokes. She'd previously appeared as far back as a 1972 episode of Doctor in Charge. Later on in 1980 she appears in The Professionals episode Slush Fund as the Kookie Girl. 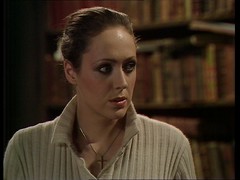 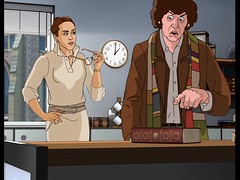 Claire Keightley doesn't appear in the VHS version of this episode but should have been seen in the lab scenes in this episode which were due to be filmed in recording block 2 so it was always something of a jolt when she seemingly appears out of nowhere in episode 3 of the VHS version! The 2017 DVD version animates lab scenes with her and Chris or the Doctor which improves the flow of the story no end! It does mean that we see the animated version of her before the real one though! 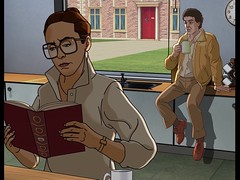 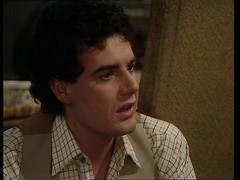 Playing Chris Parsons is Daniel Hill. He's appear in Blake's 7's: Sand as Chasgo before gaining recognition in the sitcoms No Place Like Home. There's a fabulous joke in the story's VHS introduction Daniel Hill now running a retirement home: at the time it was recorded the actor was then appearing in Waiting for God, with Horns of the Nimon's Graham Crowden, playing care home manager Harvey Bains. As related on the Shada DVD documentary, Hill met his wife Production Assistant Olivia Bazzelgette, while working on Shada.

Daniel Hill isn't the only cast member from No Place Like Home, where he played the son-in-law Raymond Codd, to have a Doctor Who connection. The father of the family, Arthur Crabtree, is played by William Gaunt who'll pop up in Revelation of the Daleks as Orcini. One son, Nigel Crabtree, is played by a young Martin Clunes very soon after appearing in Snakedance as Lon. The other son, Paul Crabtree, was played by Stephen Watson who we'll shortly see in Full Circle as a Marshman. He made national news when he died, aged 26, while on his honeymoon in Spain, just before the fourth series of No Place Like Home was screened but after most of the episodes had been recorded. Lastly Tracy Crabtree was played by Dee Sadler, who will be in the Greatest Show in The Galaxy as Flowerchild.

A University is an obvious setting for a Doctor Who story at around this time: The Tom Baker years were finding viewers in University Common rooms all over the country. The Doctor Who Appreciation Society had grown out of Westfield College's Doctor Who society in 1976. Going to University was a much less common experience for those working on the original series of Doctor Who than it is nowadays. Of the entire production staff for the original series only 3 have a declared University eduction and all four went to Cambridge: Terrance Dicks was at Downing College, Philip Hinchcliffe was at Pembroke College, script editor Antony Root was at King's College and the writer & script editor of this story, Douglas Adams, was at St John's College. When Douglas initially had the idea for this story, allegedly replacing one centred around Cricket, he wanted to set in at St John's but eventually the fictitious St Cedd's was dreamed up.

From 15th - 19th October 1979 the Doctor Who team descended on Cambridge to conduct their location filming, using a large number of locations in the town. 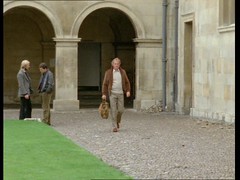 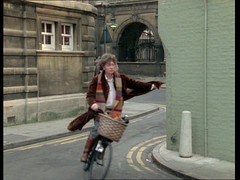 The College scenes were filmed at Emmanuel College. The bicycle chase sequence was originally scheduled to be filmed at night but, thanks to some ongoing problems between the BBC and the unions, the Lighting Director was summoned back to London necessitating the sequence to be recorded during the day. While out for a drink, Tom Baker was approached by a member of the St John's College Choristers who offered their services and it's that group that can be seen singing Chattanooga Choo Choo as the Doctor cycles down Trinity Lane. 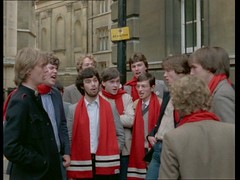 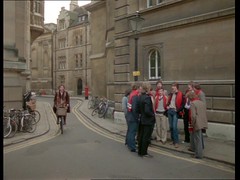 There's a number of passersby in the location scenes in this episode, most of which I've been unable to find on IMDB or trace any other Doctor Who roles for: Tria Linning, Beth Turner & Lynn Golliday. Richard English & Harry Bunges serve as passersby and also as students in episode 1. The only Passerby I have found on IMDB is Roger Neate: He, alongside Nicky Ryde, would have been a lab technician in unfilmed studio sequences for this episode.

Two days after this episode was planned to be broadcast the Blake's 7 episode Dawn Of The Gods was shown.