524 The Horns of Nimon: Part Three

"You call this a maze? It's a cheat! The walls keep changing!"

Welcome to the first episode of Doctor Who shown in the 1980s!

The Doctor interrupts the Nimon allowing Romana, Seth & Teka to escape but the remaining Anethians stay rooted to the spot. The Nimon deems that five crystals will suffice. Soldeed & Sorak examine the Tardis. The Doctor finds his friends. The hymetusite crystals are fed to the Nimon's furnace, with the Nimon being delighted that operational power level has been achieved. The Doctor remembers what the power complex reminds him of: a giant positronic circuit. He summons K-9 but he is captured and immobilised by Soldeed. The Doctor thinks that the power complex is focussed on the Black Hole and using it as a gateway to Hyperspace. Soldeed orates to his generals about the power the Nimon will give them. Soldeed & Sorak are alarmed when the antennae on the complex start to glow. The Doctor & Romana observe as a capsule materialises in the centre of the power complex containing a two more Nimon who tell the first one that Crinoth is finished. The Doctor realises the Nimon are invading but while Romana examines the capsule the Doctor accidentally transports it away but before it can be retrieved they are interrupted by Soldeed who damaged the equipment and swears to kill the Doctor....

After a rather long reprise, which lasts till 2:23 into the program, we get what is essentially a big run around the Nimon's Power Complex (Labyrinth) culminating in a revelation that there's more than one Nimon and they're mounting an Invasion. It's not the worst third episode but until quite close to the end it is just running around. 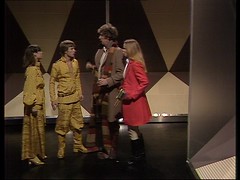 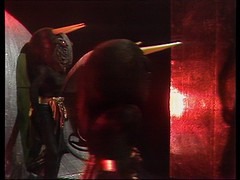 But the answers start to come as the episode progresses:

ROMANA: I've never seen anything quite like this before.
DOCTOR: No. I thought for a moment it was a giant transmat.
ROMANA: No transmat pad.
DOCTOR: That's right. It's a direction beam of some kind, though.
ROMANA: Hmm. It seems to be pumping out energy over vast distances.
DOCTOR: Yes. Wait a minute. That's some kind of bearing. Of course! It's focused on the black hole.
ROMANA: Our black hole?
DOCTOR: Well, we said it was artificially created.
ROMANA: From here?
DOCTOR: Yes.
ROMANA: But why? What good is a black hole to anyone?
DOCTOR: It could be a gateway towards hyperspace.
ROMANA: With an exit somewhere else.
DOCTOR: Yes.
ROMANA: Where?
DOCTOR: I don't know, but I'll tell you something interesting. When I mentioned the black hole to Soldeed, he didn't seem to know what I was talking about.
ROMANA: Ah, well, people often don't know what you're talking about.
DOCTOR: Exactly. If Soldeed doesn't know about the black hole, what does he think all this if for?

NIMON: Welcome to Skonnos, my friends. Welcome to the new home of the Nimon race, the next step in the great journey of life.
NIMON 2: You have done well, but you're only just in time. Crinoth is finished.
NIMON: Now that you're here, come. We can begin the migration with all speed.

ROMANA: It's a space capsule.
DOCTOR: Yes.
SETH: I don't understand. There's no engines.
DOCTOR: It wouldn't need engines, would it, Romana.
ROMANA: The energy beam. The black hole.
DOCTOR: Two black holes. One at the beginning of the journey, one at the end, and a hyperspatial tunnel in between.
ROMANA: And that beam providing the motive power.
DOCTOR: Yes.
TEKA: I don't understand.
ROMANA: The Nimons have found a way of leaping across the universe as far as they want, instantaneously.
DOCTOR: That's right.
TEKA: I thought there was only one Nimon.
DOCTOR: So did Soldeed. They've been terribly clever. Fiendishly clever.
TEKA: Seth, what's happening?
DOCTOR: Invasion.
SETH: Invasion.
DOCTOR: Yes, it happens all the time. When a race runs out of space or destroys its home, it has to find somewhere else to live.
SETH: Skonnos?
DOCTOR: Yes.
SETH: But it's already inhabited.
DOCTOR: Yes.
TEKA: Then how many more are coming?
DOCTOR: Well
ROMANA: To make all this worthwhile, there must be thousands.
DOCTOR: Millions.
TEKA: What, two at a time?
DOCTOR: Well, as more arrive, they'll build more transmats and increase exponentially. You don't imagine this is the only planet that's been tricked, do you? We've got to stop them.

Which leads to the Doctor coming up with a plan!

ROMANA: Doctor?
DOCTOR: It's all right.
ROMANA: Oh, I wish you wouldn't do that.
DOCTOR: I think I've found the main power control.
ROMANA: Really?
DOCTOR: Yes. If I can reverse the flow, the energy will go back to where the space-time tunnel begins.
ROMANA: Crinoth.
DOCTOR: Yes. I might even be able to send the Nimons back again.
ROMANA: Brilliant.

One, with an eye on the Third Doctor, is forced to wonder what flow the Doctor reversed.....

Unfortunately it all goes wrong when Romana is inside the capsule when it disappears and Soldeed damages the equipment!

Simon Gipps-Kent, playing Seth, had done a lot of child acting in the 1970s featuring in The Tomorrow People as Paul in The Doomsday Men and Quadrophenia as a Boy at Party. He later appears in the unscreened The Black Adder pilot as Rudkin but he doesn't reprise the role at any point in the first series and I can find no record of another actor playing it. His career dried up in the early 80s and he died of a morphine overdose on 16th September 1987. 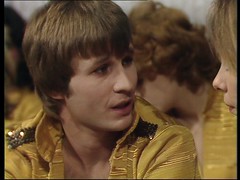 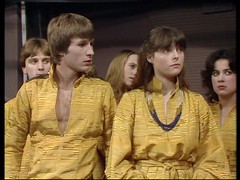 Seth's female companion, Teka, is played by Janet Ellis who had done some acting during the 1970s, including a memorable appearance in The Sweeney as Susie in Hard Men. By the time this episode aired she was presenting Jigsaw (which also featured Seventh Doctor Sylvester McCoy and then went on to present Blue Peter. Nowadays she's most famous for being the mother of popstar Sophie Ellis Bextor. Janet Ellis' father is Mike Ellis, a BBC visual effects designer, who will later operate Drathro in parts 1-4 of Trial of a Timelord.

The last time I watched this story I thought I'd recognised one of the female Anethian extras in it so I dug out the DWM with the archive in (247) to get their names: Rachael Wheeler, Zena Daire & Katy Jarrett. 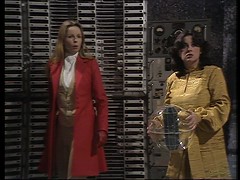 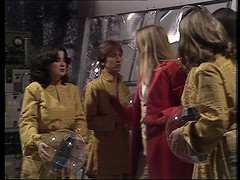 I identified the young lady in question as Katy Jarrett. It turns out she had another job at around the same time as this story was filmed: She was Zuckuss in The Empire Strikes Back, where she works under her given name Catherine Munroe. She's got a website at http://www.cathymunroe.com/ and her CV there reckons she's in Full Circle too, but I've not managed to spot her there. IMDB think she was a tourist in Silver Nemesis: She was scheduled to be part of a group of Tourists in that story but the actors planned to be used were replaced with cameos from those connected with the show. She does return as a Daymaid in Ghost Light. There's an interview here where she talks about working on Empire Strikes Back. IMDB used to credit her with playing E-3PO, the silver protocol droid on Bespin, but she believes she played Wiorkettle, one of the aliens on Bespin instead and I see since I last blogged this story that's been corrected. She can also in Roger Moore James Bond film Octopussy as a Circus Guest, Supergirl as an Argonian Citizen and Agatha Christie's Miss Marple: The 4:50 from as Miss Marple's Housemaid Mary.

Never did mange to pin down where I recognised her from though as it's certainly none of those, though I have since managed to spot her Miss Marple appearance.

Of the other two female Anethians Rachel Wheeler returns as a Customer in Arc of Infinity. There are five Rachel Wheelers on IMDB but none of them look like being this one. Zena Daire is on IMDB but hasn't been in anything else I recall.

The male Anethians are Nicholas Drake and Daniel Tabori.

The Anethian Corpses in the Nimon's larder are played by Gary Gold, Jane Foot and Debbi Thomson. 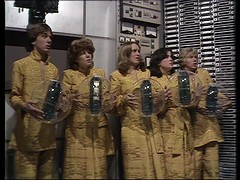 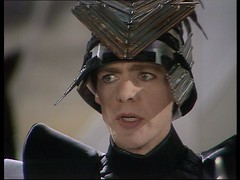 Soldeed's general Sorak is played by Michael Osborne who had in the Square of Troy in The Myth Makers and a Guardian in The Ark. He was also in the Roger Moore James Bond film The Spy Who Loved Me as a Naval Lieutenant.

None of the Skonnan Elders in this story are listed on IMDB but the Doctor Who Appreciation Society Production File comes to our rescue.

Derek Chafer was a Saxon in The Time Meddler, a Greek/Trojan Soldiers/People in Square in The Myth Makers, a Guard in the Massacre, a Settler in The Gunfighters, a Cyberman in The Moonbase, a Guard in Fury from the Deep, a Cyberman in The Invasion, a Miner, Issigri HQ in The Space Pirates, a Military Policeman & a Unit Soldier in The Silurians, a Prisoner in Mind of Evil, a Primitive in Colony in Space, a Guard in Curse of Peladon, a Warrior in the Mutants, an Exxillon in Death to the Daleks, a Guard in Monster of Peladon, a Soldier, Armourer & Brethren in Masque of Mandragora, a Levithian Guard in Ribos Operation and a Gracht Guard in The Androids of Tara, He returns as Doctor Body Parts & a Pangol Doctor in The Leisure Hive and a Gundam in Warriors Gate. In Out of the Unknown he was a Man in 1+1=1.5 and in Doomwatch he was a Man in Project Sahara, Re-Entry Forbidden & The Red Sky. In Monty Python's Flying Circus he was the Gasman in Dinsdale!

Roy Brent had been a Man in Firing Squad & Prison Sentry in The War Games, an Auton/Hospital Porter in Spearhead from Space, a Control room Assistant & UNIT Soldier in The Ambassadors of Death, a UNIT Soldier in Claws of Axos, a Miner in Monster of Peladon, a Double for Noah/Libri in Pallet in Ark in Space, one of the Collector’s Escort in The Sunmakers, a Shrieve in The Ribos Operation and a Guard in Creature from The Pit. He returns as a Resistance Fighter in Trial of a Timelord: Mindwarp. In Monty Python's Flying Circus he was an Armoured Knight in Njorl's Saga. 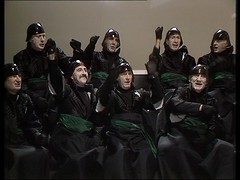 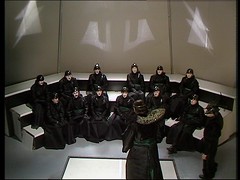 Ronald Mayer had been an Auton/Commissionaire in Spearhead from Space, a Man in Pub/Coven & Villager in The Daemons and a Time Lord in The Deadly Assassin. He's been in Quatermass and the Pit as a Journalist in The Wild Hunt and a Dead Photographer in Hob.

Eric French was an SRS Bouncer/Officer/Audience member in Robot. In Blake's 7 he's a Goth Guard in The Keeper and in The Hitchhiker's Guide to the Galaxy he's the G'Gugvunt Leader in the fourth episode.

Ray Lavender was the Taran Wood Beast and a Gracht Guard in Androids of Tara, He returns as one of the Pangol Army in The Leisure Hive, a Snakedancer in Snakedance. In Blake's 7 he's a Guard in City in City at the Edge of the World.

Trevor Wedlock was a Noble in Androids of Tara an returns as a Technician in Vengeance on Varos.

David Harris had been a Tourist in Louvre in City of Death.

Donald Groves is making his debut here and returns as a Foster & a Citizen in Keeper of Traken and an Elder in Planet of Fire. He'd been in Porridge as Trevor, Lukewarm's other half, in Men Without Women. He was in Doomwatch as a man in No Room for Error & Flight Into Yesterday.

Robert Barker & Peter Jackson have no imdb entries or other Doctor Who appearances.

Two days after this episode was broadcast the Blake's 7 episode Aftermath was shown.