"The great journey of life must continue!" 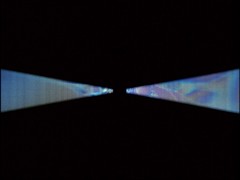 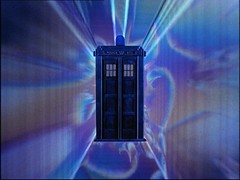 A moment's silence please as we start this episode: This is the last broadcast appearance of the iconic Tom Baker tunnel title sequence which has been with us for 144 episodes. It's retirement here leaves it 8 episodes shy of the record held by the original title sequence used on all 134 First Doctor episodes and the first 18 Second Doctor episodes. 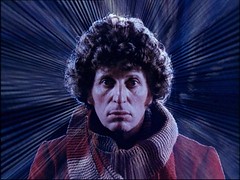 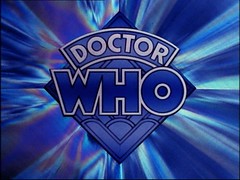 The Doctor stuns Soldeed and starts to make repairs to the equipment, but needs K-9. Soldeed escapes, pursued by Seth wielding Soldeed's staff. Romana finds herself on the dying planet Crinoth where she meets Sezom, who was used by the Nimon like Soldeed is on Skonnoss. He rebelled against the Nimon and uses a local mineral Jasonite to enhance the power of his staff to harm them. Seth & Teka are separated in the Power Complex, and Teka is captured by Soldeed. The Doctor bring the capsule back but find 2 Nimon within so returns it to Crinoth. Sorak reactivates K-9 who goes to the Power Complex to seek the Doctor. Knowing there is a problem, the Nimon on Crinoth prepare their final contingency plan to make the great journey of life continue. Sezom gives Romana some Jasonite and then distracts the Nimon guarding the capsule allowing Romana to get aboard but pays with his life. The Doctor brings Romana back to Skonnos., but they are captured by the Nimon. Seth frees them using Soldeed's staff enhance with the Jasonite. K-9 arrives to help the Doctor while Romana & Seth go to free the Anethians from the larder. Soldeed finds them, and tries to stop them but Seth kills him as he overloads the reactor. The Anethians are freed and K-9 navigates their way out of the changing maze escaping just as the Power Complex goes critical destroying the Nimon within. The Doctor & Romana observe Crinoth exploding on the Tardis scanner as Seth travels home in the Skonnan battlecruiser, repainted white.

Yup, liked that, decent episode which kept moving at a decent speed. That strobing red light when the Power Complex is overloading is annoying though!. 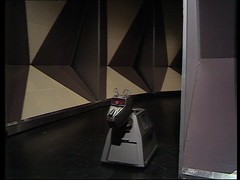 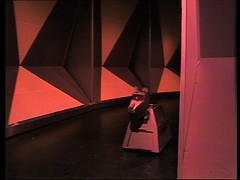 Still we get a nice big explosion at the end! 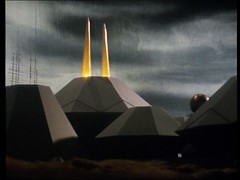 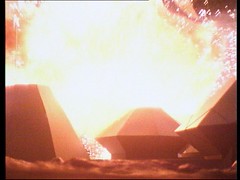 Now it would be fair to say that Graham Crowden hadn't given a restrained performance in the first three episodes. However that turns out to be just a bit of a run up for the moment when Soldeed discovers there's more than one Nimon and he takes the inevitable dive off the deep end into pure madness! 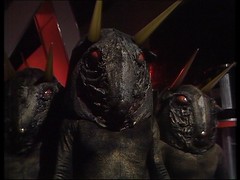 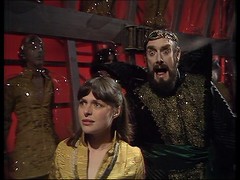 ROMANA: It's all over, Soldeed. You're finished.
SOLDEED: No, the Nimon will fulfil his great promise! The Nimon be praised!
ROMANA: The Nimon be praised? How many Nimons have you seen today?
SOLDEED: Don't dare blaspheme the Nimon.
ROMANA: How many!
SOLDEED: Skonnos will
ROMANA: How many Nimons?
SOLDEED: Three. I have seen three.
ROMANA: Well, I've just seen a whole lot more rampaging down the corridor. Face it, Soldeed, you're being invaded.
SOLDEED: He said he was the only one. The last survivor of his race.
ROMANA: He told you what you wanted to hear, promised you what you wanted to have.
SOLDEED: So this is the great journey of life?
ROMANA: They're parasitic nomads who've been feeding off your selfishness and gullibility.
SOLDEED: My dreams of conquest. You have brought this calamity upon me!
ROMANA: You've brought it on yourself!
SOLDEED: You will die for your interference!
ROMANA: Stop him! 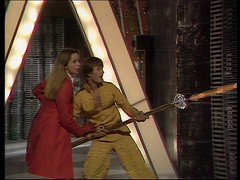 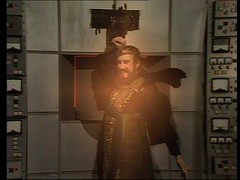 You fools. You are all doomed. Doomed!

Brilliant stuff, a superb over the top performance as a mad Doctor Who villain. Love it.

Some more adapted names for you: Crinoth is obviously Corinth, while Jasonite's origins must surely lie with the Greek hero Jason. Sezom is perhaps less obvious, but when you think of characters associated with great journeys then the biblical Moses springs to mind.

Playing Sezom, Soldeed's predecessor as the Nimon's pawn on Crinoth, is John Bailey. He first appeared in Doctor Who playing the commander of the first expedition to the Sensesphere in A Desperate Venture the sixth episode of the 1964 story The Sensorites. He then returns in 1967's The Evil of the Daleks as Edward Waterfield. 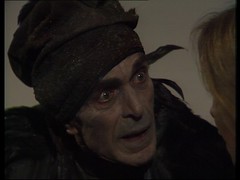 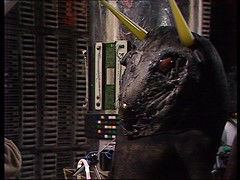 The Nimon which appears in all four episodes of this story is played by Robin Sherringham. He was in the famed missing Out of the Unknown story The Prophet as one of the Robots whose costumes were later repainted turned up in Doctor Who The Mind Robber as the White Robots. You can see some Telesnaps from this episode on Wikipedia. Bob Appleby plays one of the newly arrived Nimon in episode 3 & 3, and he'll be back in The Trial of a Time Lord: Terror of the Vervoids as a Vervoid. The other newer Nimon, Trevor St. John Hacker returns as a Trooper in Resurrection of the Daleks and the Second Thomas Allman in Red Dwarf The Inquisitor. All three Nimon are voiced by Clifford Norgate who will return to voice the Generator in the next transmitted Doctor Who story, The Leisure Hive.

Horns of the Nimon has copped some flack over the years but I'm really quite fond of it: it's a nice retelling of the Theseus & The Minotaur myth, combined with the concept of a locust like species leaping from planet to planet and stripping them bare, with a brilliant crackpot performance from guest star Graham Crowden. It was the only serial that season I watched first time out after Destiny of the Daleks and when I found a source of taped Doctor Who while at University I made an effort to get it.

This is the only Doctor Who directed by Kenny McBain who would later go on to produce ITV's Inspector Morse. Likewise it's the only solo script written by former Script Editor Anthony Read, but as we've noted he did have a hand in the "David Agnew's" Invasion of Time. It's also the last episode to be scored by Dudley Simpson who had worked on the show since Planet of Giants. As we've said it's the last episode broadcast using the Tunnel tittle sequences and it's the last broadcast episode for producer Graham Williams and Script Editor Douglas Adams.

At 20 weeks the broadcast (I keep using that word today) Season 17 is the joint shortest of Doctor Who so far, tying with Season 12 (Robot-Revenge of the Cybermen). Following it was the longest break to date of 32 weeks with no new Doctor Who, though both Destiny of the Daleks & City of Death had a repeat during this period. The reason for the shortness of the season and the length of break was that industrial action at the BBC forced the cancellation of the next story, Shada by Douglas Adams, halfway through recording. But what was recorded of Shada does exist and over the next six weeks we'll look at that material, what should have been made and the various attempts at completing the story.

Two days after this episode was broadcast the Blake's 7 episode Powerplay was shown.


While Doctor Who was off air during the summer, the second Star Wars film The Empire Strikes Back was released in the UK. Many Doctor Who actors are involved and for an attempt at compiling a list see Episode 321: The Mutants part 4.

The Horns of the Nimon was novelised by Terrance Dicks and released in October 1980. I've got very clear memories of buying a copy of this and Invasion of Time from a book fair in Perranporth while on holiday visiting my Aunt, Uncle & Grandmother. It was one of a number of remaindered Doctor Who novels given away by Doctor Who magazine and following the promotion a large amount of left over stock, all of this novel, were pulped. It was the final fourth Doctor story to be released on video in June 2003 and on DVD on 29th March 2010 as part of Doctor Who - Myths & Legends with The Time Monster & Underworld.