"The great pact nears it's completion! The Nimon be praised! Skonnos shall rise and conquer!"

The Pilot puts Romana in the hold with the Anethian sacrifices. The Doctor puts the Tardis into a spin allowing the Asteroid to knock it out of the pull of the black hole. The Nimon reminds Soldeed of his agreement to provide the required tribute and speaks once again of the Great Journey of Life. Soldeed plans to attack Aneth, thinking they have rescued the children. Teka tells Romana that Seth will destroy the Nimon. Skonnos detects the missing ship and prepares for the ceremony to mark the fulfilment of their pact. Soldeed is angry that two of the hymetusite crystals are missing, used by Romana to power the ship but the pilot claims responsibility. Soldeed sends both the Pilot & Romana into the power complex with the Anethians and the hymetusite to face the Nimon. The Doctor makes makeshift repairs to the Tardis and sets course for Skonnos. The Pilot wanders the maze of the Power Complex, briefly catching sight of the Anethians but he, and Romana & the Anethians find the walls are shifting around them. The Doctor sights the Power Complex from orbit, reminding him of something. Materialising on Skonnos the Doctor is immediately arrested. The Anethians find the husk of a body that decays at the touch, which Romana believes has had the life sucked out of it. The Doctor confronts Soldeed with the accusation that someone is building a black hole nearby. Soldeed claims not to have seen Romana but when Soldeed's general produces the Doctor's grativic anomaliser he knows she is nearby. Soldeed drives the Doctor into the Power Complex. Romana and the Anethians find the Nimon's larder where it keeps previous Anethian sacrifices in suspended animation. They are captured by the pilot, who summons the Nimon, who kills him then turns on Romana & the Anethians..... 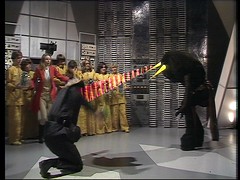 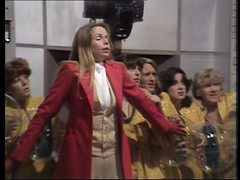 Ah now we're talking proper mythology, with Romana and the Anethians wandering the Power Complex (Labyrinth) with the Nimon (Minotaur) in the centre. The shifting walls is a nice touch and very well done on screen.

There's some genuine horror too as the corpse falls to pieces on them! 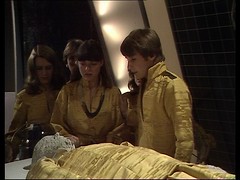 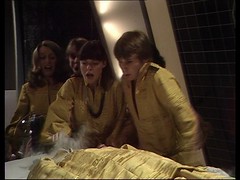 I seem to recall a similar effect in The Claws of Axos being whited out for being too graphic!

Then there's the slow realisation that the Anethians are destined for the Nimon's larder when they discover their predecessors in cold storage! 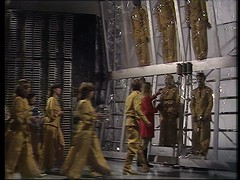 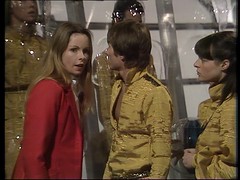 I'll talk about the rest of the cast later, but really this story is dominated by one actor:

Ladies and Gentlemen, playing Soldeed we have the late, great Graham Crowden! 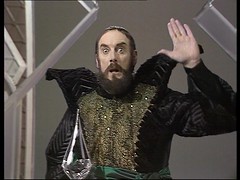 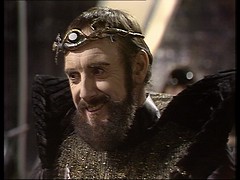 At this point it his career he's probably best known for his theatre work, even though he'd been working on TV since the early 1950s! He had a memorable appearance as the Slade Prison Doctor in the Porridge Christmas Special "No Way Out", which gets an airing in our house every Christmas! He had been offered the role of the fourth Doctor when Jon Pertwee left the series but had turned it down, not be willing to commit to three years in a role.

Recognition would follow sometime after this story. First he was cast as Dr. Jock McCannon in A Very Peculiar Practice then Tom Ballard in Waiting for God, both of which have a fair few Doctor Who connections.

A Very Peculiar Practice stars (by then) former Doctor Who Peter Davison alongside David Troughton (Enemy of the World/War Games/Curse of Peladon/Midnight/son of Patrick Troughton. Also featured were Trevor Cooper (Revelation of the Daleks), Hugh Grant (Curse of Fatal Death), Geoffrey Beevers (Ambassadors of Death/Keeper of Traken/husband of Caroline John (Liz Shaw)), Chris Jury (Greatest Show in the Galaxy) and Tim Munro (Planet of the Daleks). Female lead in the first series is Amanda Hillwood, Morse's 2nd pathologist (we've had Frost and Barnaby's pathologists in recent episodes of Doctor Who) and is married to Max Headroom's Matt Frewer. If you haven't seen A Very Peculiar Practice then it's currently available on DVD (at long last!)

Waiting for God was a long running sitcom set in a retirement home. Amongst the regular cast are Daniel Hill (Shada), Andrew Tourell (Black Orchid) and Michael Bilton (The Massacre/Pyramids of Mars/The Deadly Assassin)

Which brings us nicely back to the accusations of comedy levelled frequently at this season. One of the worst examples occurs in this episode as the Doctor's repairs to the Tardis fail: the accompanying sound effect is taken straight from light entertainment's repertoire.

(The Doctor has a new arrangement of the equipment and wires linked into the time rotor.)
DOCTOR: Right, K9. Without our grativic anomaliser, this is the best we can do. Let's give it a try, shall we? Ah, come on, old girl. 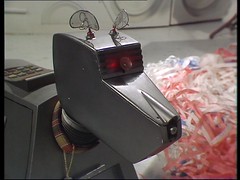 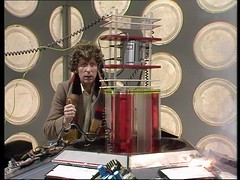 While trying to find out if the mineral Hymetusite had a classical origin to it's name (I didn't find anything) I discovered that the sound effect used here has a name! It's called Major Bloodnok's Stomach which was first used in an episode of The Goon Show!

Not many of the extras for this story are listed on IMDB, with just a couple of the Skonnan Guards getting a mention. The Doctor Who Appreciation Society Production File supplies the rest of the names:

Peter Roy was a Greek Soldier in The Myth Makers, an English Soldier in The Highlanders, an Airport Police Sergeant & Chauffeur in The Faceless Ones, a UNIT & Bunker Man in The Invasion, a Security Guard in The Seeds of Death, a Passenger/Plague Victim/Passersby/Ambulance Man/Policeman in Doctor Who and the Silurians, a Policeman in Mind of Evil, Technic Obarl in Hand of Fear, a Guard in The Face of Evil, a Guard in The Sun Makers, a Galifreyan Guard in The Invasion of Time, a Gracht Guard & one of Zadek's Guards in The Androids of Tara and a Guard in The Armageddon Factor He returns as a Policeman in Logopolis, an Ambulance Man in Castrovalva, a Man in the Cave Crowd in Snakedance and a Van Driver in Resurrection of the Daleks. Like many extras at this time he has Blake's 7 form too appearing as a Citizen / Prisoner in The Way Back & Space Fall, an Alta Guard in Redemption, an Albian Rebel in Countdown and a Federation Trooper / Rebel in Rumours of Death. He was in Doomwatch as a man in Project Sahara and Flood. In the The Hitchhiker's Guide to the Galaxy he plays the Limousine Chauffeur in episode 2. He's got a notable role in the James Bond film Thunderball where he played British Secret Agent 006. He has a less obvious appearance in Return of the Jedi as Major Olander Brit but that hasn't stopped the character from getting a Wookipedia page!

Jim Delaney had previously been a English Soldier in The Highlanders, a Confederate Soldier & Resistance Man in The War Games, a UNIT Soldier & Plague Victim in The Silurians, a Passerby in Mind of Evil, a Presidential Guard in Frontier in Space, a Time Lord in Deadly Assassin, a Coven Members in Image of the Fendahl and a Noble in Androids of Tara He returns as a Logopolitan in Logopolis, a Time Lord in Trial of Time Lord: Mysterious Planet & Mindwarp and a Crimson Time Lord in Trial of Time Lord: Terror of the Vervoids and The Ultimate Foe. In Adam Adamant Lives! he's a TA Soldier / RA Major in D for Destruction. In Yes Minister he's the Permanent Secretary in The Compassionate Society and in the 1989 Batman film he's the Election Ceremony Patron.

Making his return to Doctor Who is Joe Santo who was a Resistance Men in The War Games, a UNIT Soldier in The Ambassadors of Death and the Exit guard in the Mutants He later plays a Tharil in Warrior's Gate and an Alphan Servant in Trial of a Timelord: Mindwarp. He was in Doomwatch as a Man in The Islanders, In the Dark, High Mountain & Enquiry, Moonbase 3 as José in View of a Dead Planet, Blake's 7 as a Scavenger in Deliverance and Fawlty Towers as the Laundry Van Driver's Mate in The Kipper and the Corpse. 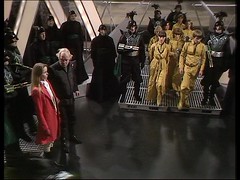 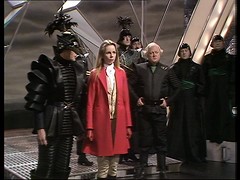 Paul Barton was previously a UNIT Soldier and a Silurian in Doctor Who and the Silurians, a Roundhead in The Time Monster, a Courtier in The Masque of Mandragora, a guard in Face of Evil, Marn’s Attendant in The Sunmakers and a Skonnos Guard in The Horns of Nimon. He returns as a Citizen/Unbeliever in Planet of Fire and a Walk on in Remembrance of the Daleks. He was in Doomwatch as a Man in Hear No Evil, Invasion and No Room for Error and appears in Moonbase 3 as a Technician in View of a Dead Planet.

Derek Suthern He first appeared as a Path Lab Technician in The Hand of Fear returning as a Mentiad in Pirate Planet, a Gracht Guard & Zadek Guard in The Androids of Tara, a Mute in The Armageddon Factor, a Guard in The Creature from the Pit, and a Mandrel in Nightmare of Eden. He would have made a fourth consecutive appearance this season as a Krarg in Shada if that hadn't have been cancelled. That also deprives him of appearances in five consecutive Doctor Who stories as he returns as an Argolin Guide in The Leisure Hive, the first story of the next season. At the end of that season he plays PC Davis in Logopolis part one followed by a Cricketer in Black Orchid, a Policeman in Time-Flight, and a Man in Market in Snakedance. In Blake's 7 he was a Federation Trooper in The Way Back, a Scavenger in Deliverance, a Federation Trooper in Trial & Countdown, a Customer / Gambler in Gambit, a Hommik Warrior in Power and a Space Princess Guard / Passenger in Gold. He appears in the Roger Moore James Bond film The Spy Who Loved Me as an Atlantis Guard and is in Fawlty Towers as a Hotel Guest in both The Germans and The Psychiatrist.

David Glen had been a Tourist in Louvre & a Plain-clothes Detective in Louvre in City of Death. In Blake's 7 he was a Laboratory Technician in Seek-Locate-Destroy, Frell, the Technician at Autopsy in Killer, a Crimo in Hostage, a Servalan's Bodyguard in Star One and a Federation Medic in Children of Auron.

Norman Bradley is on his Doctor Who debut and returns as a Young Scientist in Shada, a Holiday Maker in Leisure Hive, a Cyberman in Earthshock and a Guard in The Five Doctors

Terry Gurry was in Douglas Camfield's Beau Geste as a Corporal and By the Sword Divided a Lt. Truscott in Ring of Fire and Not Peace, But a Sword.

Finally I can't find Edmund Thomas in anything I've seen.

This is the last episode of Doctor Who shown in the 1970s.