"There are three physical gateways and the three are one. The whole of this domain, the ancient arch, the mirrors. All the gateways are one!"

Romana goes outside to speak to Rorvik, hoping to obtain memory wafers to repair K-9. She volunteers to go with them to their ship. The Doctor evades the robot, which is soon joined by another reactivated compatriot, and he manoeuvres them into destroying one another. Adric & K-9 attempt to follow Romana but while triangulating a mass reading they become separated. Rorvik, convinced she is a time sensitive, attempts to force Romana into being his new navigator but all she is able to visualise is a stone gateway in the vicinity. Rorvik takes the majority of his crew to find the gateway, leaving Aldo & Royce behind to unpack another Tharil, and Romana bound to the navigator's chair. Instead the two attempt to revive it, but the Tharil screams in agony seemingly electrocuted. The Doctor, aided by K-9, reactivates the memory circuits of a robot which tells him of the slaves that built the Gundan robots to travel through the gateway to overcome their cruel masters. Rorvik and his crew arrive and want to hear more but the playback is interrupted by the second Gundan reactivating, going on a rampage and walking through the mirror Biroc escaped through. The Doctor uses the confusion to escape, passing through the mirror to the bewilderment of K-9, Rorvik and his crew. 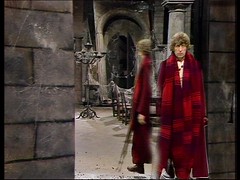 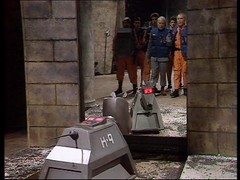 Meanwhile on the ship something is moving through the corridors and approaches the bound Romana on the bridge. 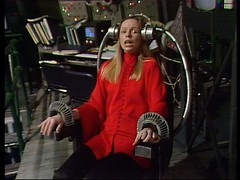 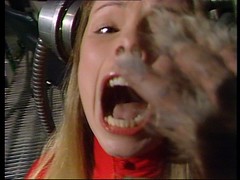 I definitely saw this on first airing (and probably the previous episode as well) as the ending of the episode left a big impression on me with the Doctor vanishing into the mirror and Romana at the mercy of an unseen thing. I think it's one of the best cliffhangers that the series produced by a long way. I've no memory of this season till this point (we were probably watching Buck Rogers on the other side) but from here on in I have solid memories of watching. And for the last three stories this season there's a solid increase in viewing figures indicating I wasn't the only one!

The Doctor's interogation of the Gundan's memory throws up more questions thn it answers:

DOCTOR: Poor things. Hardly any better off than K9. Ah ha. Memory wafer.
GUNDAN: No Tharil shall outlive the day of the feast.

GUNDAN: We are Gundan. We exist to kill. Slaves made the Gundan to kill the brutes who rule.
DOCTOR: What particular brutes did you have in mind?
GUNDAN: The Gundan were sent where no slaves could go. We faced the time winds and we lived. They had only the gateway to flee for safety.
DOCTOR: Gateway? Gateway to where?
GUNDAN: Gateway. Gateway. Gateway.
DOCTOR: Gateway to where? Just as it was getting interesting. If only I had an alternative source of energy.
K9: Orders, master. Orders.
DOCTOR: K9. Just the chap I wanted. Listen, K9, I'm sorry to have to ask you to do this, but all this stuff about the gateway is terribly important.
K9: Energy levels critical.
DOCTOR: The whole thing's critically critical, old chap. This could be the way out. Now come on, be a good dog and power up. Come on, power up. Up, up, up, up. Good dog. Now. Now. What's all this about the gateway? 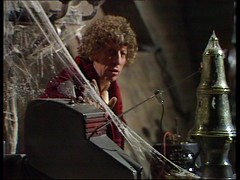 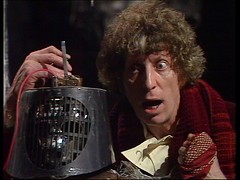 GUNDAN: There were always slaves from the beginning of time. The masters descended out of the air riding the winds and took men as their prize, growing powerful on their stolen labours and their looted skills.
DOCTOR: Yes, well, look, look, I'm sure this is frightfully interesting. Could you get back on to the bit about the gateway, please?
GUNDAN: The masters created an empire, drained the life of the ordinary world.
DOCTOR: Your ordinary world. I'm from N-space.
GUNDAN: They came from the gateway.
DOCTOR: Ah ha.
GUNDAN: There are three physical gateways and the three are one.
DOCTOR: Well
GUNDAN: The whole of this domain, the ancient arch, the mirrors.
DOCTOR: The thing is, it's not actually a physical gateway that I'm looking for.
GUNDAN: All the gateways are one.
DOCTOR: Ah. So it is here. The way out.
RORVIK: Something we're all interested in, I think. 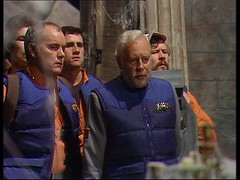 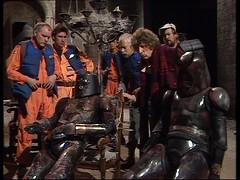 DOCTOR: Oh, hello. You seem to have attracted a big audience.
RORVIK: Let's have the rest of the recital.
DOCTOR: Ah, ahem, he, er, he doesn't seem to be too sure of his lines.
RORVIK: Prompt him. Go on, more.
DOCTOR: All the gateways are one. All the gateways are one. You see, I'm so sorry, he's completely run down. I'm the Doctor, by the way, and that's K9, and we just happened to
GUNDAN: There are three physical gateways and the three are one. This is the place from which the masters came. Here a great empire once stood, ruling all known space.
SAGAN: This must be the place
RORVIK: Shush!
GUNDAN: For all their skills, the slaves could not approach the gateway in their own persons. But once they learned its secret, we were built, the Gundan robots, to wage war on them.
DOCTOR: Gundans, eh?
RORVIK: And the secret of the gateway is?

.... not revealed in this episode!

There are several actors playing Gundan robots in this story and all the sources I have suggest most of them are in this episode which means all the suits of robot armour you can see here have someone in them! The most recognisable name playing a Gundan robot is Pat Gorman. Since we haven't seen him for a while, it's probably time for a ceremonial reading of his credits: He made his Doctor Who debut as a Freedom Fighter in Dalek Invasion of Earth going on to play a Planetarian in Mission to the Unknown, a Greek Soldier in The Myth Makers, a Guard in The Massacre, a Worker in The War Machines, a Monk in The Abominable Snowmen, a Guard in The Enemy of the World, a Cyberman in The Invasion, a Technician in The Seeds of Death, a Military Policeman in The War Games, the Silurian Scientist in Doctor Who and the Silurians, a Technician in The Ambassadors of Death, a Primord in Inferno, the Auton Leader in Terror of the Autons, a Primitive, Voice and Long in Colony in Space, a Coven Member in The Dæmons, a Guard & a Film Cameraman in Day of the Daleks, a Sea Devil in The Sea Devils, a UNIT Soldier in The Three Doctors, an Earth Guard & a Sea Devil in Frontier in Space, a Global Chemicals Guard / 'Nuthatch' Resident in The Green Death, a UNIT Corporal in Invasion of the Dinosaurs, a Guard in The Monster of Peladon, a Soldier in Planet of the Spiders, the Gate Guard in Robot, a Thal Soldier in Genesis of the Daleks, a Cyberman / Dead Crewman in Revenge of the Cybermen, a Guard in The Seeds of Doom, a Soldier / Brother in The Masque of Mandragora, a Chancellory Guard in The Deadly Assassin, a Medic in The Invisible Enemy, a Kro in The Ribos Operation, the Pilot in The Armageddon Factor and a Thug in City of Death! He returns as a Foster in The Keeper of Traken, a policeman in Timeflight, Grogan in Enlightenment, a Soldier in The Caves of Androzani and a Slave Worker / Cyberman in Attack of the Cybermen.

And it's not just Doctor Who he's appeared in! He was in Blake's 7 as a Scavenger in Deliverance, a Federation Trooper / Rebel in Voice from the Past, the Trantinian planet hopper Captain in Gambit, a Death Squad Trooper in Powerplay, a Federation Trooper in The Harvest of Kairos & Rumours of Death, a Hommik Warrior in Power, a Helot in Traitor and a Federation Trooper in Games & Blake. He's in The Prisoner as a Hospital Orderly in Hammer Into Anvil and Doomwatch as a Man in Hear No Evil. In Fawlty Towers he's a Hotel Guest in The Builders and in Porridge he plays a Prison Officer in The Desperate Hours. He was the Captain of the Guard in the I, Claudius episod Reign of Terror, was a Flying Squad Officer in The Sweeney episodes Thou Shalt Not Kill & Latin Lady and was in The Professionals 5 times as a Golfer in Killer with a Long Arm, a CI5 Agent in Close Quarters & Servant of Two Masters, a Security Man in Weekend in the Country and a Police Superintendant at inquest in Discovered in a Graveyard. He was a Blind Man in the fifth episode of The Day of the Triffids, the Killer in The Nightmare Man, a Legionnaire in Beau Geste, a Policeman in The Young Ones: Interesting and many, many, many more! 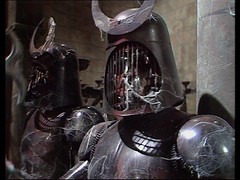 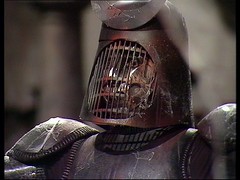 Another Gundan is Terry Sartain. He had previously an Alien Technician & Americain Soldier in the War Games, a Warrior in The Mutants, a Draconian in Frontier in Space, a UNIT Soldier in The Three Doctors, an Exxilon in Death to the Daleks, a SRS Bouncer in Robot, an Android UNIT Soldier in Android Invasion, a Brethren Member in Masque of Mandragora, a Timelord in Deadly Assasin and a Customers in Modern Art Gallery in City of Death. He returns as one of the Cave Crowd in Snakedance. He was in Doomwatch as Minister's P.P.S. / Man in Club / Man at Palazzo in The Killer Dolphins and in Blake's 7 as a Crewman in Spacefall and a Hooded Figure in Cygnus Alpha.

Robert Vowles is credited as a Gundan in episodes 1 & 2, so I assume he's the one that attacks the Doctor. He was in The Nightmare Man as Lieutenant Carey.

The last Gundan is a little harder to pin down. IMDB says it'sDerek Shafer, an actor with little else on his IMDB entry, while The DWAS Doctor Who Production Guide has this actor down as the slightly differently spelt Derek Schafer, who isn't listed on IMDB. But both misspelling makes me think the actor in question could actually be Derek Chafer. These are the roles under the various permutations of his name that I can find: He was a Saxon in The Time Meddler, Greek/Trojan Soldiers/People in Square in The Myth Makers, Guard in the Massacre, Settler in The Gunfighters, Cyberman in The Moonbase, Guard in Fury from the Deep, Cyberman in The Invasion, Miner, Issigri HQ in The Space Pirates, Military Policeman & a Unit Soldier in The Silurians, Prisoner in Mind of Evil, Primitive in Colony in Space, Guard in Curse of Peladon, Warrior in the Mutants, Exillon in Death to the Daleks, Guard in Monster of Peladon, Soldier, Armourer & Brethren in Masque of Mandragora, Levithian Guard in Ribos Operation, Gracht Guard in The Androids of Tara, Skonnan Elder in Horns of the Nimon, and Doctor Body Parts & a Pangol Doctor in The Leisure Hive. In Out of the Unknown he was a Man in 1+1=1.5 and in Doomwatch he was a Man in Project Sahara, Re-Entry Forbidden & The Red Sky. In Monty Python's Flying Circus he was the Gasman in Dinsdale!