The Doctor is held at gunpoint by Rorvik, but they are interupted by the arrival of K-9.

DOCTOR: K9! Where have you been, my dear old thing?
RORVIK: Is that yours?
K9: Mass conversion anomaly. Alert. Danger. Warning.
RORVIK: Oh, shut him up.
DOCTOR: Don't say that! He may have a point. What mass conversion anomaly?
K9: Dimensional contraction of the microcosmic system. Orders.
DOCTOR: Contraction? This could be serious.
ROMANA: It's the memory wafers, Doctor.
DOCTOR: What?
ROMANA: He's going a bit funny.
K9: Mathematical vanishing imminent. Warning.
DOCTOR: No, that's not funny. That's. What's causing it?
K9: Impossible to compute. Space time instability.
RORVIK: Time to play with your toys later, Doctor.
DOCTOR: I think not! If K9's right, and he usually is, this place is in worse shape than we thought it was.
PACKARD: You can't get worse than the back of beyond.
DOCTOR: Soon it may not even be that.
ROMANA: K9 says its dimensions are contracting. 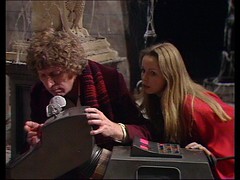 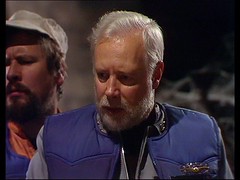 RORVIK: Well, that's the silliest thing I've heard all day. Who's going to believe that?
PACKARD: Well
RORVIK: I thought you might. It's ridiculous. Space contracting?
ROMANA: And time.
PACKARD: At least hear him out. What's the hurry?
DOCTOR: Quite a lot. How long have we got, K9?
K9: Contraction curve exponential. Estimate on present data beyond capability of this unit.
ROMANA: So it's starting?
DOCTOR: Slowly.
ROMANA: But might collapse completely at any minute.
DOCTOR: Yes, yes, but it would need a huge mass to disturb time and space to that extent. Even the Tardis doesn't weigh that much. Neither does their ship.
ROMANA: It might. The hull is made of dwarf star alloy.
DOCTOR: What?
ROMANA: Dwarf star alloy.
DOCTOR: Dwarf star alloy? What are you playing at? Is it something to do with these?
ROMANA: They're slavers.
DOCTOR: Yes. Trading in time sensitives. And dwarf star alloy is the only material that will hold them.
RORVIK: And it's very expensive.
DOCTOR: How many more of those poor creatures have you got in that hulk of yours?
RORVIK: Poor creatures? Each one's worth a king's ransom, Doctor. You seem to understand business even less than you understand science. This wild theory about contraction.
DOCTOR: No wild theory about contraction. K9. No, K9. K9!
RORVIK: Hold it.
RORVIK: Your machine seems to know as much about it as you do. Get up!
PACKARD: So what you're saying is, the distances are getting shorter.
LANE: Like between the ship and here.
DOCTOR: Yes. As the domain contracts.
RORVIK: Shut up! He's playing for time.
DOCTOR: Playing for time? Quite the reverse.
LANE: He's right about one thing. The trip between here and the ship. Each time we've done it, it has been shorter.
DOCTOR: Yes, and if I can get back to my Tardis, I can prove it and find out exactly how much time we have left.
RORVIK: Oh, gobbledygook. We can deal with this in very short order. Get us through. Time's run out for you, Doctor.

The Doctor sees Biroc through the mirror:

DOCTOR: Hello, Biroc.
BIROC: Doctor. You've seen our past, you've seen our present. You were right. We abused our power. But judge whether we've not suffered enough.
DOCTOR: As you said, the weak enslave themselves.
BIROC: The time of our enslavement is over. We will be free.
DOCTOR: I wish you luck. But what about us? Have you got any ideas on that count?
BIROC: Do nothing.
DOCTOR: What?
BIROC: It is done. 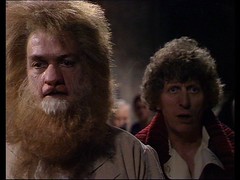 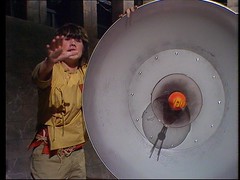 DOCTOR: Look here, Rorvik. You've got to stop this back blast. You'll kill us all.
RORVIK: So you say, Doctor. I say it's the only way out of here.
DOCTOR: You can't blast through those mirrors. You must realise by now it just throws the energy straight back.
RORVIK: They've got to break. Everything breaks eventually.

Romana grants them a little grace by shorting the ship's power system using Biroc's chains. Crewmember Sagan attempts to crudely revive the Tharils but kills those he works on. Biroc himself rescues them from Rorvik.

DOCTOR: Biroc? What are you doing here?
BIROC: Nothing.
DOCTOR: It's all right for you.
BIROC: And for you, too. Do nothing.
DOCTOR: Do nothing?
ROMANA: Of course, Doctor. Don't you see?
DOCTOR: Yes, that's right. Do nothing, if it's the right sort of nothing.
RORVIK: Run, Doctor. Scurry off back to your blue box. You're like all the rest. Lizards when there's a man's work to be done. I'm sick of your kind. Faint-hearted, do-nothing, lily-livered deadweights. This is the end for all of you! I'm finally getting something done!

Lazlo kills Sagan and properly revives the remaining Tharils himself . The Doctor, Romana and Biroc return to the Tardis

DOCTOR: We've made it. Quick, quick, inside. What's the matter?
ROMANA: I'm not coming with you.
DOCTOR: Inside. That's an order.
ROMANA: No more orders, Doctor. Goodbye.
DOCTOR: What? What a moment to choose.
ROMANA: But it is, isn't it? A moment to choose. I've got to be my own Romana.
BIROC: And we need a Time Lord.
ROMANA: Goodbye, Doctor.
DOCTOR: No, no, no. Wait, wait. There's something else. K9. He'll be all right with you behind the mirrors.
ROMANA: I'll take care of him.
DOCTOR: I'll miss you. You were the noblest Romana of them all. 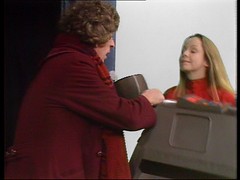 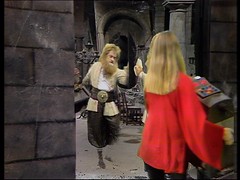 Romana, Biroc & K-9 pass through the Gateway just before the backblast comes to full power, but is just reflected back my the gateway, destroying the ship. 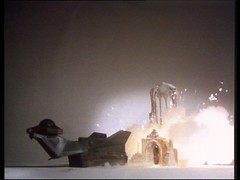 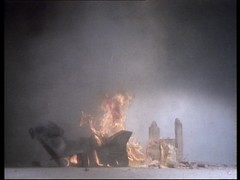 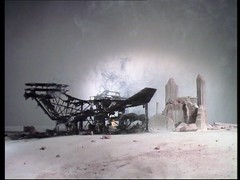 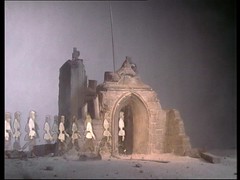 The Tardis passes through the Tharil realm on it's way to N-Space as Romana promises to help Biroc free the Tharils enslaved on many other worlds. 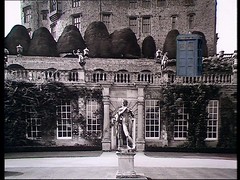 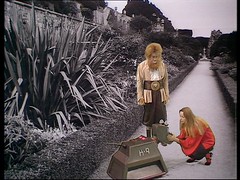 Having said that it's a bit graphic with the Tharils' screams as Sagan attempts to revive them, Rorvik stepping on The Doctor's hands and Sagan's death, albeit via the same means he had been unsuccessfully attempting to use to revivive the Tharils. And as the story, in paricular this episode, has gone on Rorvik's got louder and taken less notice of anyone else as madness consumes him.

But it wraps the story up nicely: the slavers pay for what they've done with their lives, the Tharils are freed from their subjugation and Romana take up their cause, ceasing this last opportunity to avoid going home to Galifrey.

A great end to what's been a superb set of episodes. I knew Warriors's Gate was good but everytime I watch it it just gets better.

This isn't just the end of the story, it's the end of the road for two of our supporting characters. K-9 had been an annoyance to new producer John Nathan-Turner from day one and had quickly decided it had to go. Technically problems with the prop had caused delays to shooting but K-9 was a much loved part of Doctor Who at this time and a campaign in the papers had failed to save him. As a sop to viewers it was announced that K-9 would be starring in a pilot for his own television series.... 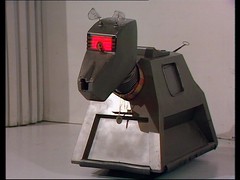 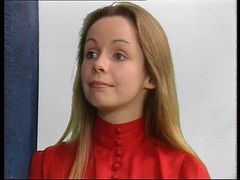 Also leaving was Romana actress Lalla Ward who, feeling that the show was moving away from a family audience, had decided to move on. Throughout her time as Romana she'd been engaged in an on/off romance with Tom Baker, and shortly after she left the show the two were married for a brief time. In 1992 she married biologist Richard Dawkins, having been introduced by their mutual acquaintance former Doctor Who script editor Douglas Adams.

There are two actors appearing as Tharils in just this episode: Mark Arden & Stephen Frost, collctively known as The Oblivion Boys. They've both made many television appearances since, such as in The Young Ones & Black Adder, and starred in Lazarus & Dingwall, which features Jeremy Gittins, who plays Lazlo in this story, in three episodes.

Warriors' Gate was adapted as a Target Novel by Stephen Gallagher under his nom du plume John Lydecker in 1982. The E-Space Trilogy, containing Full Circle, State of Decay & Warriors' Gate, was released on video in 1997 and on DVD on 26th January 2009.

Doctor Who Season 18, including Warrior's Gate, was released on Blu-Ray on 18th March 2019.