494 The Androids of Tara: Part Three

"You can't trust androids, you know."

Strella is revealed to be an android, which the Doctor believes had been sent to kill the king. Grendel makes accusations that there may be more androids present and the rest of the ceremony is postponed. Lamia enquires of Romana as to what her stone is but refuses to return it. Lamia is ordered to prepare another android as the Doctor works to repair the Prince's android. K-9 reports he has detected Romana in Castle Gracht. A message is sent to the Doctor from Madam Lamia bargaining Romana's safety for safe passage for the Count. The Count sends an android copy of Romana to kill the Doctor, but while being copied Romana steals a tool from Madam Lamia. The Doctor & K-9 go to the arranged meeting place, Pavilion of the Summer Winds, as Romana frees herself and escapes. The Doctor meets Lamia, who brings "Romana" in but K-9 detects the android and destroys it. Lamia flees the scene but is accidentally killed by the Count's guards who open fire on the Pavilion. K-9 blasts a hole in the back allowing them to escape and meet Romana. They meet Farrah, Zadek & the Android Prince at the hunting lodge where Romana tells them the the Count is holding the real Prince. Grendel comes to see them under a truce, but destroys the android prince and escapes, seizing Romana!

This episode is an extended version of escape & recapture for Romana starting with her escaping from the cell and ending with her being carried off on horse back!

Seemingly the only reason for Romana to escape is to convey the information that Grendel is holding the real Prince..... Hmmmm, don't the Doctor and co all but know that anyway? Apart from destroying the Prince's android the plot doesn't advance much in this episode but it's all done so well. I remember the laser crossbows the guards were using as well as the electrically charged swords: the story's marriage of a medieval society with high technology worked well for me at the time and I still like it today.

The start of the episode sees The Doctor meeting the story's villain, Count Grendel, for the first time: 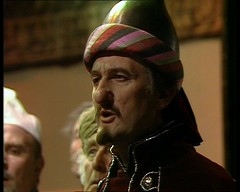 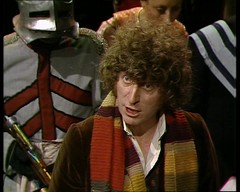 ARCHIMANDRITE: But it doesn't make sense. Why send an android to swear loyalty to the King?
DOCTOR: To get close enough to kill him.
ARCHIMANDRITE: But who would want to kill the King?
DOCTOR: Ah.
ARCHIMANDRITE: Unless ....
GRENDEL: My dear Archimandrite, what are you suggesting?
ZADEK: Treachery against His Majesty.
GRENDEL: Take care what you say, Zadek. Your Eminence, I suggest we postpone the oath-taking for the time being. Who knows how many other programmed androids there may be.
ARCHIMANDRITE: You think there are more?
GRENDEL: It is a possibility we must face, your Eminence. I shall leave my own personal guard here to protect His Majesty.
ZADEK: I'm afraid I cannot permit that, Count.
GRENDEL: It is not for you to say.
ZADEK: As Commander of His Majesty's bodyguard, it is my decision and mine alone.
GRENDEL: You presume too much, Zadek. Well, what does His Majesty have to say on the matter? He is very quiet.
DOCTOR: Ahem. His Majesty is very tired. Can't you talk about this tomorrow?
GRENDEL: Who the devil are you, sir?
DOCTOR: I'm the King's Doctor.
ARCHIMANDRITE: Is His Majesty ill?
DOCTOR: No, nothing a nice rest won't cure. He'll be all right tomorrow.
ARCHIMANDRITE: I understand, Doctor. Come, Count. We must allow His Majesty to rest.
GRENDEL: But what of the danger?
DOCTOR: What possible danger can His Majesty be in from his own personal bodyguard, Count?

They get another scene together later in the episode and it's obvious both actors are having a great time! 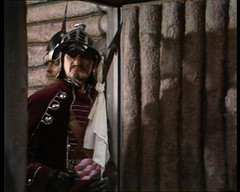 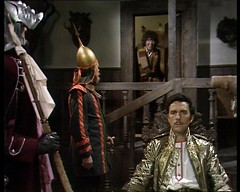 DOCTOR: Nothing that can't be fixed, Count.
GRENDEL: Oh, Doctor! Well, there you are. I was glad you managed to escape safely.
DOCTOR: Yes, well, so was I.
GRENDEL: Tell me now, where is the charming Romana?
ZADEK: What do you want, Count Grendel?
GRENDEL: Only a word with the Doctor, according to the usages of war.
DOCTOR: Me?
GRENDEL: Shall we? 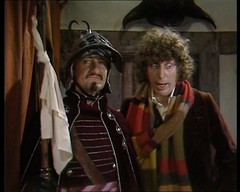 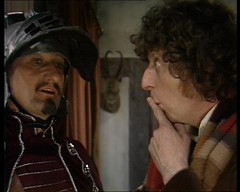 DOCTOR: I don't know. Go on, you tell me.
GRENDEL: Kingmaker extraordinary. Thanks to you keeping that micro-circuitry going, Zadek has his king. But have you thought what would happen if something went seriously wrong, like an overload on the circuits?
DOCTOR: What would happen?
GRENDEL: Your usefulness ceases.
DOCTOR: What?
GRENDEL: You know too much. You become a dangerous embarrassment to Zadek. An embarrassment to be got rid of, and don't think he wouldn't.
DOCTOR: What's the answer?
GRENDEL: Suppose we both unmade our kings. No more King Reynart at all.
DOCTOR: What? What would that achieve?
GRENDEL: A vacancy for a new king.
DOCTOR: Ah. You, I suppose?
GRENDEL: No, no, no, Doctor, no. There would be opposition. No, I was thinking you'd make an excellent king.
DOCTOR: Me? Just a moment.


DOCTOR: The Count's just offered me the throne.
ZADEK: That's treason, Count.
GRENDEL: Only so long as the King is alive! 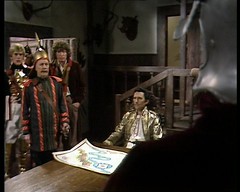 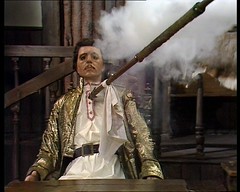 Playing Count Grendel of Gracht is chief guest star Peter Jeffrey! Prior to this story he'd appeared in Doctor Who as the Pilot in the second Doctor's fifth story The Macra Terror. He does have another, slightly more tangential, link to the show: he appeared in the, sadly missing, third season Out of the Unknown Get Off My Cloud as Marsham Craswell. This rather odd episode famously features The Daleks in their first colour appearance! He's appeared in The Sweeneyas Det. Supt. Pringle in Thin Ice, the Survivors episode Garland's War as Knox and By the Sword Divided as Oliver Cromwell. By this point he's a famous name: I caught him on TV over Christmas in the Yes Minister Christmas Special Party Games as Eric, the Chancellor of the Exchequer, who leads "an active life away from the House of Commons". 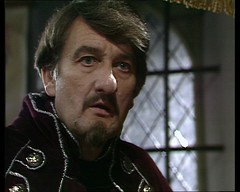 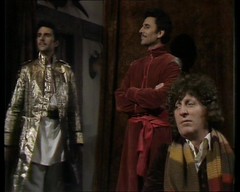 Playing both Prince Reynart and his android double "George" is Neville Jason. He's got Paul of Tarsus, the series of biblical stories starring second Doctor Patrick Troughton on his CV where he plays King Agrippa II in Herod the King and To Rome. He was in the 1963 Sean Connery James Bond film From Russia with Love as Kerim's Chauffeur. Science fiction fans may have seen his as the Black Guard Captain in The Tripods series 2 episode 11.

Simon Lack, playing Swordsmaster Zadek, was previously Professor Kettering in The Mind of Evil. He also appears in the Doomwatch episode In the Dark as Andrew Seton. This episode also features features Second Doctor Patrick Troughton 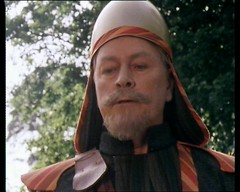 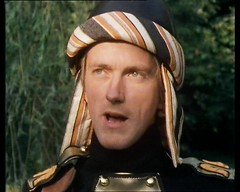 Count Grendel's gateman/servant Till is played by Declan Mulholland, previously Clark in The Sea Devils.

He can also be seen in the 1979 Quatermass What Lies Beneath as a Security Guard, Hawk the Slayer as Sped, Time Bandits as a Robber, The Tall Guy as the Rubberface Doorman and the Father Ted episode New Jack City as the Shouting Priest.

But Declan Mulholland is probably best known for not appearing on screen as Jabba the Hutt in Star Wars: his role in the film was cut. The character was later shown in a completely different form in Return of the Jedi, so when the footage featuring Mulholland was reinstated into The Star Wars Special Edition, Mulholland found himself replaced by a computer generated effect. However the footage showing him has been shown in several making of features over the years! 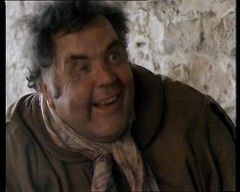 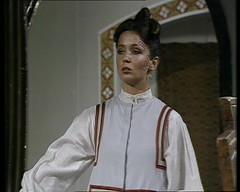