495 The Androids of Tara: Part Four

"Next time I shall not be so lenient!"

Romana is returned to Castle Gracht where the count intends to marry her to the Prince, kill the Prince, marry Romana, kill her and inherit the throne. The Doctor, Farah & Zadek plan an assault on Castle Gracht. Grendel has one last attempt to persuade the real Princess Strella to cooperate telling her she has become dispensable. Grendel uses the Princess' life to blackmail Romana into cooperating. Under cover of darkness the Doctor crosses the castle moat in a boat with K-9 who begins to cut their way into the castle. Romana & The Prince are taken to their wedding ceremony as the K-9 breaks through the wall, being left in the boat by the Doctor. As the wedding ceremony begins the Doctor searches the palace finding the Key To Time segment that Romana had confiscated from her. At a crucial moment the Doctor interrupts the ceremony and engages the Count in a sword duel, allowing Romana & Reynart to escape admitting Zadek, Farah & the Prince's troops to Castle Gracht. Romana saves Strella from one of the Count's guards. The sword duel takes in much of the castle, finishing on the battlements with Grendel diving in the moat to escape promising that next time he will not be so lenient. Strella is reunited with Reynart as the Doctor & Romana take their leave, suddenly remembering that poor K-9 is still stuck in the boat!

Another fab episode, albeit one with a very slow start before the sword fight. But even then there's some great dialogue as Reynart & Romana figure out Grendel's cunning plan!

REYNART: Romana!
ROMANA: Are you all right?
REYNART: I thought you'd escaped.
GRENDEL: She had, but I knew Your Majesty couldn't live without her, so I brought her back for you.
ROMANA: Why do you torment him?
GRENDEL: Oh, now that's really most unfair, my dear. I'm really quite hurt. All I'm doing is to restore to His Majesty his bride-to-be.
ROMANA: What?
GRENDEL: You'll make a lovely couple.
ROMANA: What's his idea? Is it a joke?
REYNART: Oh, no. Grendel doesn't joke about political power.
ROMANA: Then what's his plan?
REYNART: To become legal, rightful King of Tara. You see, if you marry me you will automatically become Queen, but five minutes after the wedding you would almost certainly be a widow.
ROMANA: He'd kill you?
REYNART: He would. And the moment you're widowed, Count Grendel, that well-known champion of widows and orphans, would step in and marry you, thus becoming Consort of the rightful Queen of Tara.
ROMANA: And then it would be my turn for an unfortunate accident.
REYNART: Precisely.


Unfortunately the flaw in the plan comes in the form of an unexpected wedding guest: 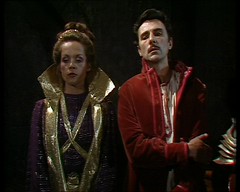 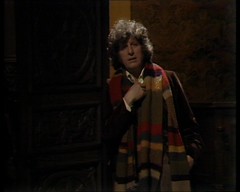 DOCTOR: No!
ROMANA: Doctor!
DOCTOR: No, she doesn't. Hello, everyone. Sorry I'm late. If there's something I always enjoy, it's a good wedding, isn't that true, Romana? Now, listen. Have you got to the bit where you ask them if there's any just cause why they shouldn't be joined in
GRENDEL: You seem to make a habit of interfering in my affairs, Doctor.
DOCTOR: Yes, yes, I do really.
GRENDEL: Well, you've done it for the last time.
ARCHIMANDRITE: Stop! This is a solemn ceremony!
ROMANA: Not any more, it isn't.
ARCHIMANDRITE: Stop!
GRENDEL: Leave him, leave him. he's mine. Defend yourself, sir.
DOCTOR: I haven't brought my sword.
GRENDEL: Well, I've no wish to kill a man without a weapon in his hand. Here.
GRENDEL: Till!
ROMANA: Doctor, he's the best swordsman on Tara.
DOCTOR: Is he?
ROMANA: Do you know what you're doing? Good luck.
GRENDEL: I shall give you a fencing lesson before you die. En garde!


We've seen the Doctor use a sword before, he fought with The Master during The Sea Devils and I'm pretty certain this Doctor used one as some point in Masque of Mandragora. 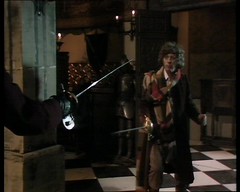 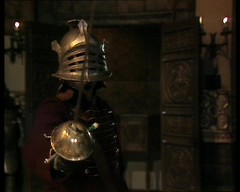 The episode is dark right the way through and the night time setting, plus the addition of a helmet, helps disguise that a stuntman is playing Grendel through the extensive sword duel!

It's a decent end to the story with some action to entertain us in which we also get to see Romana meeting her double for the first time.

STRELLA: Who are you?
ROMANA: Well, that's a very long story. 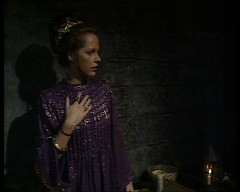 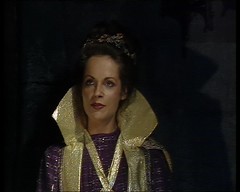 By the end of the episode they're getting on like a house on fire with Strella teaching Romana the fine art of Tapestry making!

ROMANA: But there are so many different types of stitch. It must take years to learn the art.
STRELLA: It's really only a question of patience and a certain delicacy of touch. I'm sure you can manage it. Go on. That's right. Very good. 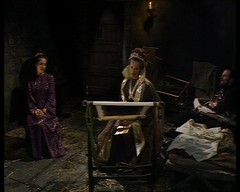 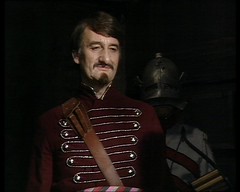 FARRAH: You know, you almost have to admire the man.
ZADEK: Admire him? I should have killed him when he walked in here, flag of truce or no flag of truce.
FARRAH: You've got to admit, sir, it takes courage to walk in here, to distract our attention while his men kidnap Miss Romana. I mean, it takes nerve.
ZADEK: Nerve is one quality Grendel has never been short of.

Peter Jeffrey has obviously had the time of his life with this part and leaves us with one of the greatest departing lines of any villain in Doctor Who! 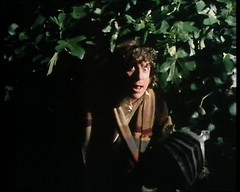 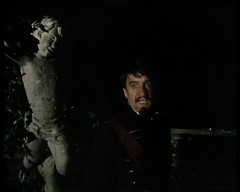 DOCTOR: It's all over, Grendel. That's Zadek and his men. Listen! You might as well surrender now.
GRENDEL: Surrender? You forget, Doctor, I'm a Gracht. We never surrender.
GRENDEL: Next time I shall not be so lenient!
DOCTOR: Grendel, you forgot your hat! 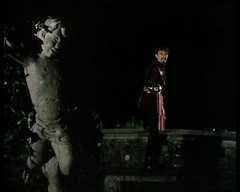 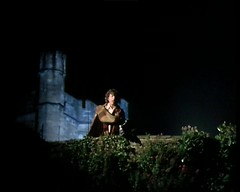 Of all the fourth Doctor tales I've seen so far this one has been the one that's stood out as being better then I was expecting..... which is a little odd as I recall it quite fondly from when I saw it twice as a child! It's the first time I've seen it episodically for a bit and I'm guessing this is one of those that work better one episode at a time rather than watched all the way through like we tend to do with DVDs.

< Androids of Tara was the second story from this season, after The Pirate Planet, to be repeated during the summer of 1979, broadcast for a second time on Thursday at 6.55 from the 9th to 30th August that year. Androids of Tara was novelised by Terrance Dicks and released in April 1980. Androids of Tara was released on video in May 1995 on the same day as Stones of Blood to form the second pair of stories from the Key to Time season released, with The Ribos Operation & The Pirate Planet coming out the previous month and Power of Kroll & Armageddon Factor the next. The Key To Time season was a set of releases which came with a specially designed spine picture that ran over all six title. While there has never been a video boxset release of the Key To Time, it's only ever been available as a boxset on DVD. In October 2002 all six Key To Time stories were released in Region 1 with minimal extras & restoration to help satisfy the American demand for Tom Baker stories. The Key to Time was then released as a special edition, numbered & limited to 15,000 with brand new extras in Region 2 on the 24th September 2007, which sold out very quickly with this set commanding a premium price on eBay for quite some time. The Key to Time Box Set was reissued in a non limited edition in November 2009 and can now be had for a very reasonable price.