The Doctor is transmatted to Zeos where he is interrogated by the Shadow, who has brought the Tardis there and wants the Doctor's 5 segments to the Key To Time. The Shadow vanishes, returning to his base where he then interrogates Astra. Romana & K-9 attempt to break in to the Transmat room but when they do Merak seizes the tracer and transmats ahead sealing the room behind him. Romana & K-9 follow, pursued by the Marshal's second in command Shapp who finds the Doctor on Zeos. The skull behind the mirror, a communication device from the Shadow, assures the Marshal there will be no more Zeon attacks so the Marshal decides to attack Zeos. Romana finds Merak, who has been led by the tracer to a bracelet belonging to Astra, The Doctor summons K-9 who helps them find Romana and then leads them to the Zeon commandant, the computer Mentalis who tell them the war is over and Obliteration is next. The Marshal nears Zeos and prepares to destroy it.

The episode starts full of dark corridors as we get to meet the Doctor's opposition in this story, The Shadow, who has been lying in wait for him for a rather long time:

SHADOW: You think I would trust you?
DOCTOR: No. And I certainly don't trust you. Bit of an impasse, eh?
SHADOW: No, Doctor, there is no real difficulty. I have waited so long, even another thousand years would be nothing for me. But you, I have watched you and your jackdaw meanderings. I know you and I know there is a want of patience in your nature.
DOCTOR: That's right. Fools rush in.
SHADOW: Exactly. Leave him. He will make his own mistake. Then, Doctor, I shall be waiting.

As well as the Doctor he has Princess Astra as a prisoner too:

ASTRA: I don't know! I don't know, I tell you.
SHADOW: You must know. You are a daughter of the Royal House of Atrios.
ASTRA: Yes, and I tell you, whoever you are, that I've never heard of the sixth segment or the sixth anything!
SHADOW: And I tell you, Princess, the secret has been passed down through generation after generation of the Royal House, and since you are the sole surviving member of the line, you must know and you will tell me, if I have to tear it from the living fibre of your very being. Do you understand?
ASTRA: Yes. And if I knew, I would tell you!

The identity of the other foe isn't really what we expect: it's not the Zeons but a computer, Mentalis:

DOCTOR: There's your enemy, Shapp. Runs everything. Attack, defence, surveillance, production, everything. The ideal war general. No glory, no speeches, no medals and no blood.
SHAPP: What do you mean?
DOCTOR: It's fully automated. There are no Zeons on Zeos.
SHAPP: No Zeons on Zeos.
DOCTOR: No. Just this passionless lump of minerals and circuitry. Highly efficient, doing very well, giving Atrios a battering, killed millions without a flicker. Just doing its job. And totally invincible.


I remember nothing of the middle two episodes of this serial from my youth so it's always a big surprise to me when we find ourselves in the room containing Mentalis, complete with the UFO computer banks. And, writing this just after having watched the episode, that's about all I remember of it now! 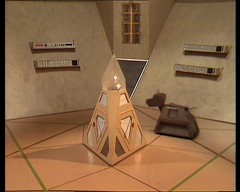 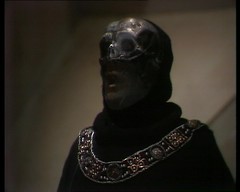 Playing the Shadow is William Squire. The same year this story aired he was also in the Blake's 7 episode Horizon as Kommissar. Elsewhere on his long CV is the Late 1950s H.G.Wells' Invisible Man where he plays Waring the Valet in The Big Plot. He was in acclaimed Shakespeare series An Age of Kings in various roles. He works with Tom Baker again in The Hound of the Baskervilles where he plays Frankland.

Playing the speaking Technician in the Atrios control room is Iain Armstrong who can be seen in as a Villager in both parts of the Robin of Sherwood story The Time of the Wolf. 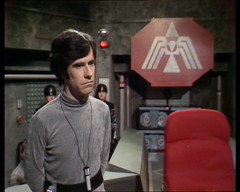 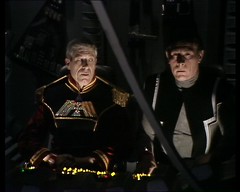 Playing the Marshal's pilot in the last few episodes of this serial is someone who's probably been in more episodes of Doctor Who than anyone else: regular supporting artist Pat Gorman! He first appeared as a Rebel in Dalek Invasion of Earth, we last saw him as Kro in The Ribos Operation and he'll be back as a thug in The City of Death.

Two days after this episode was broadcast the Blake's 7 episode Pressure Point was shown.