514 The Creature from the Pit: Part One

"You're the fellow who was found in the Place of Death. Anyone found there is put to death!"

The Tardis receives a distress call summoning them to the verdant planet Chloris where they find the remains of a giant metal egg. They are captured by servants of the Lady Adrasta, but while en route to her palace they are attacked by bandits, who are seeking metal which is rare on Chloris, who capture Romana. The Doctor is sentenced to death for being found in the place of death. Romana talks her way free and summons K-9. The Doctor tells Adrasta that he thinks the structure he found is an egg shell & alive, for which she sentences her technical adviser to death. He is taken to the pit and thrown in, consumed by the monster within. Romana & K-9 attempt a rescue but K-9 is immobilised by the wolf weeds that Adrasta keeps and Romana is captured. The Doctor attempts to escape by jumping into the pit! 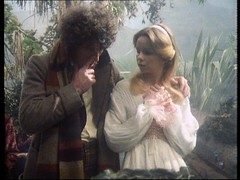 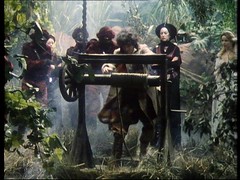 Hmmm. Somehow the humorous dialogue used in this episode is a bit silly somehow and doesn't quite work. The sequence with the Peter Rabbit book and then the junk box are particularly silly!

ROMANA: Doctor, I've been cleaning out number four hold. You've got the most awful lot of junk in there.
DOCTOR: Shush. Something terribly exciting's about to happen.
ROMANA: Oh, really? What?
DOCTOR: Mister McGregor.
ROMANA: Who?
DOCTOR: Mister McGregor. He's chasing Peter Rabbit. He's got a sieve. He's going to pop it on top of Peter!
ROMANA: Don't worry. He'll wriggle out, lose his jacket and hop into a watering can.
DOCTOR: Atchoo.
K9: Bless you. 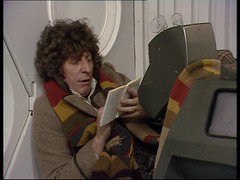 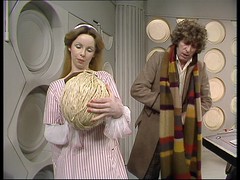 DOCTOR: Junk? Did you say junk? I don't carry junk.
ROMANA: What do you call this lot, then?
DOCTOR: That's extremely valuable equipment.
ROMANA: An old ball of string?
DOCTOR: Give that to me. Come on, give it to me.
ROMANA: To the Doctor. A souvenir with love and thanks for all his help with the Minotaur. Theseus and Ariadne.
DOCTOR: Yes. If I hadn't produced that ball of string to find a way out of the labyrinth, they were going to unravel my scarf, the wretches.
ROMANA: All right, but what can you possibly do with the old jawbone of an ass?
DOCTOR: Don't be a philistine.
ROMANA: What?
DOCTOR: That jawbone's been about a bit, you know.

And surely a joke about a ball of string, a maze and Minotaur would have been better saved for later on this season when there was a planned Minotauresque story?

Two lasts for the series in this episode: The technician Tollund is an only acting appearance in Doctor Who for Morris Barry. However he had previously directed the The Moonbase, The Tomb of the Cybermen and The Dominators, making him (I think) the only person to be credited as both an actor & director on Doctor Who. His other acting credits include episodes of Are You Being Served?, Blake's 7, The Day of the Triffids, Tales of the Unexpected, All Creatures Great and Small, and Hi-de-Hi!. 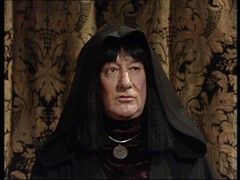 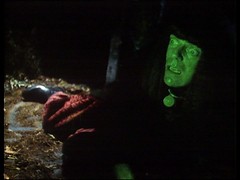 The sequences set in the Jungle look superb! They were filmed at Ealing Studios and are the first time Lalla Ward played Romana for the show, having previously appeared as Princess Astra in The Armageddon Factor. 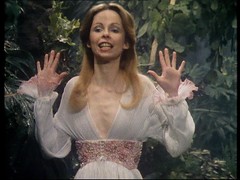 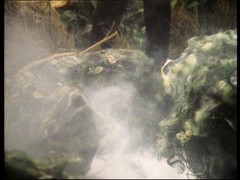 I remember seeing some of the filmed parts from this episode, notably the sequence where K-9 is attacked by the wolf-weeds on a children's program many years ago but couldn't remember where it was from. But this episode was promoted by Tom Baker appearing, in character as the Doctor, on the Children's TV nature series Animal Magic. This sequence is included on The Creature from the Pit DVD, although there's some debate as to if the correct title sequence has been used and if there pictures of the monsters displayed over the screen while Tom was talking, so I was looking forward to seeing it again and was somewhat bemused when the sequence I clearly remembered didn't actually appear! Consultation with m'learned friends at Roobarb's Forum suggests it could instead have been an episode of Ask Aspel, a children's show presented by Michael Aspel, that I had seen which contained the clip. The sequence in question, contained in an interview with Lalla Ward, later turns up on the Nightmare of Eden DVD. 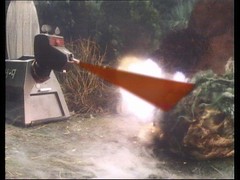 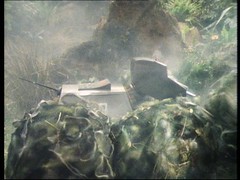 And, although it looks like being the last we'll see of him, this is the first work on he series for David Brierly who replaces John Leeson as the voice of K-9 for this season.

Hang on, Lalla Ward's first scenes as Romana? But what about Destiny of the Daleks and City of Death?

Here's Season 17 as recorded, together with each story's production codes:

As you can see the production codes jump around a bit. Rearranging the stories by Production code order gives:

The Creature from the Pit was filmed in March & April 1979, with City of Death, including the famous trip to Paris, following in May and Destiny of the Daleks, whose script was expected later, following in June and early July. 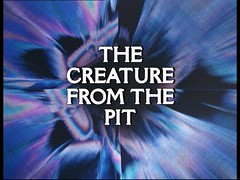 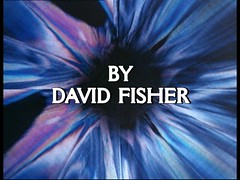 Creature from the Pit was written by David Fisher, who had previously written Stones of Blood and Androids of Tara, two consecutive stories for the previous season. Having finished work on this story he was then due to write A Gamble With Time, which was due to be the next story filmed. Problems with rewrites, other commitments and marital difficulties led to Fisher having to abandon A Gamble With Time which was hastily rewritten by the Script Editor and Producer as City of Death. So Fisher became very close to being he only man to write two consecutive pairs of Doctor Who stories! Fisher returns at the start of the next Season with The Leisure Hive.