515 The Creature from the Pit: Part Two

"I see a creature coming to you from beyond the stars!"

The Doctor survives by clinging to a ledge, breaking his fall, before falling the remaining way to the pit's floor. Adrasta plans to put Romana to work on the shell and to break K-9 up for the metal that forms his construction. The Doctor encounters the creature in the pit, a huge glowing green monster. Romana convinces Adrasta that the knowledge she needs is in K-9. In the Pit the Doctor encounters Organon, an astrologer that Adrasta threw into the pit for telling her that she would have visitors from beyond the stars, the Doctor deducing that Adrasta is a afraid of alien visitors. The Bandits plan to attack the palace to steal the metal contained within. Organon tells the Doctor how Adrasta owns the only metal mine on the planet and thus has a monopoly. Romana attempts to escape but gets no further than the throne room. The Doctor wonders how the creature got in the pit. Adrasta interrogates Romana and plans to use the Tardis to journey to the stars to get more metal. She then decides to use K-9 to kill something huge which is now superfluous. Assessing a secret corridor they enter the mines. The Doctor & Organon stumble into the huge chamber containing the creature which reaches out and consumes the Doctor..... 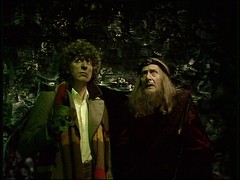 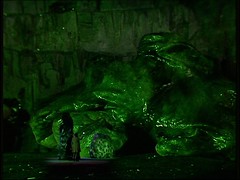 There's some good ideas bubbling away in the background of this one including the female dominated society and the metal shortage.

ADRASTA: Ah, your curious tin animal.
ROMANA: What are you going to do with him?
ADRASTA: On our planet, my dear, metal of whatever sort is valuable. Far too valuable for mere toys. Guards, break up the tin dog. Smash it to pieces.
ROMANA: But you can't break up K9!
ADRASTA: Don't worry, my dear. We'll keep every piece of precious metal.

Then there's the creature in the story's title:

ROMANA: What is that thing in the pit?
ADRASTA: We call it the Creature.
ROMANA: Ah, that's original. But what kind of creature is it?
ADRASTA: Hard to say, really.
ROMANA: Why is that?
ADRASTA: Our researchers divide into two categories. The ones who have got close enough to find out something about it.
ROMANA: Yes?
ADRASTA: And the ones who are still alive.
ROMANA: But you must know something about it.
ADRASTA: It kills people. What more is there to know?
ROMANA: Where does it come from? Is it a native of this planet?
ADRASTA: I'm sorry about your friend, my dear, believe me, but you saw for yourself, he hurled himself into the Pit. He wasn't

It's appearance, a big green blob with an extremely phallic looking appendage, leaves a lot to be desired! Wait till you see what Tom does to that later! Years later the special effects team still recall this story will a distinct lack of fondness as recounted in some detail on the Team Erato documentary on The Creature from the Pit DVD.

Then there's a failed escape attempt in this episode: Romana first discusses her escape plan with K-9 and then it fails. An obvious attempt at time wasting!

Then there's the silliness with the books:

DOCTOR: Everest In Easy Stages.
DOCTOR: It's in Tibetan! 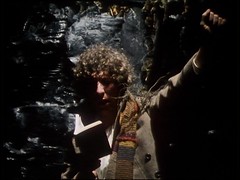 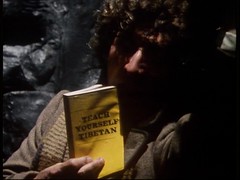 There is a tinsy tiny chance that this scene is meant to be a reference to the theme of communication which emerges next episode but for my money it's always felt like a throw away joke!

Fortunately some entertainment is at hand courtesy of the episode's most recognisable guest star:

DOCTOR: Thank you. Thank you. And thank you for saving me from that creature.
ORGANON: Oh, don't mention it, sir. As my dear mother always used to say. Born under the sign of Patus, middle cusp she was. If you can help anybody, like preventing them from being eaten by a monster, then do so. They might be grateful. So I did.
DOCTOR: Indeed you did, and I am grateful, and your mother was obviously a very fine woman. I'm the Doctor. Who are you?
ORGANON: Organon, sir.
DOCTOR: Organon?
ORGANON: Astrologer extraordinary. Seer to princes and emperors. The future foretold, the past explained, the present apologised for.
DOCTOR: What are you doing down here?
ORGANON: A small matter of a slight error in a prophecy.
DOCTOR: Ah. Well, I guess it could happen to anybody.
ORGANON: Why, are you in the business yourself, sir?
DOCTOR: What?
ORGANON: Seeing into the future?
DOCTOR: Oh, well.
ORGANON: Crystal ball man, are you? Or do you favour goat entrails?
DOCTOR: No, I tend to use a police box affair.
ORGANON: A police box affair?
DOCTOR: Yes. What about your prophecy? Did it by any chance concern the Lady Adrasta?
ORGANON: Oh, you've met her.
DOCTOR: Yes.
ORGANON: A difficult woman. Very literal mind. I told her that she would have visitors from beyond the stars.
DOCTOR: Ooo, a bit rash, wasn't it?
ORGANON: Well, it seemed a safe enough bet at the time. It's a great attention-getter, you know. I do it very well.
ORGANON: I see a creature coming to you from beyond the stars. I've done it in all the courts on the planet. It usually goes down very well.
DOCTOR: Yes, I can see it might. But the Lady Adrasta?
ORGANON: Oh, she grew very nasty. What sort of creature, she wanted to know. Well, I stalled a bit. You know, a little professional
DOCTOR: Vagueness.
ORGANON: Discretion.
DOCTOR: Ah.
ORGANON: And she threw me down here, with that thing. Where are you from?
DOCTOR: Me? Oh, from beyond the stars, you know.
ORGANON: Oh, so I was right!
DOCTOR: Yes.
ORGANON: And then Adrasta grew nasty with you and threw you down here as well?
DOCTOR: Me? No, no, no, no, no. I jumped.
ORGANON: Jumped?
DOCTOR: Yes. Do you think she's frightened of someone coming from beyond the stars?
ORGANON: I should say so. Was she frightened of you?
DOCTOR: No, no, no. I don't think it was me she was expecting. 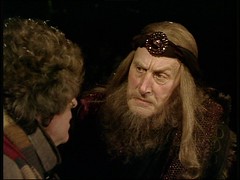 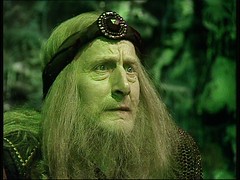 By far the most recognisable face in this story is someone who could have been in Doctor Who hundreds of times, but this is actually his first & only appearance: playing the astrologer Organon, with more than a hint of William Hartnell, is Geoffrey Bayldon. It seems that every time the Doctor was cast his name was mentioned in connection with the role! Years later he would play an alternate version of the first Doctor in two Big Finish audio plays. By this point he was famous for playing the lead role in Catweazle and had recently appeared in the film version of Porridge. He was, at the time this series was made, appearing in Worzel Gummidge, as the Crowman, with third Doctor Jon Pertwee. He had appeared in the celebrated An Age of Kings playing, like many of the cast, several roles across the series, played Tirayaan in The Tomorrow People story Into the Unknown, Number Eight in Space: 1999 second season story One Moment of Humanity and featured on the big screen as Q in the original version of Casino Royale. Constantly in demand he was still working well into his 80s. His partner was actor Alan Rowe, who appeared in Doctor Who four times: as Doctor Evans in The Moonbase, Edward of Wessex in The Time Warrior, Skinsale in Horror of Fang Rock and Decider Gariff in Full Circle. Bayldon was interviewed by Toby Hadoke for Who's Round 117 and died aged 93 on 10th May 2017.

This is Tom Baker's 134th episode of Doctor Who which brings him equal with William Hartnell's episode count.