517 The Creature from the Pit: Part Four

" I'm afraid you have only twenty four hours to live!"

The creature uses the shield to communicate using the Doctor's larynx introducing itself as Erato, a high ambassador from Tythonus. Erato came to Chloris to propose a trading agreement for the metal, abundant on Tythonus, for Chlorophyll, which is found on Chloris. Adrasta, holder of the monopoly on metal on Chloris, imprisoned it in the pit. Angry at the deception Adrasta has perpetrated the guards sets the wolf weeds on her killing her. Erato is freed from the pit. The Doctor reveals the shell they found was Erato's spaceship. Romana works out the noise the shell was making was distress signal. The bandits plan to steal Erato's photon drive, which the Doctor has entrusted to Organon. The Tythonians have set a Neutron star on a course for Chloris' sun in retaliation for the treatment of their ambassador. The Doctor plans to get Erato to weave a layer of aluminium round the star to divert it's course, but it is discovered the photon drive is missing. Kerala retrieves the drive, killing the bandit's leader, and the Doctor convinces her to turn it over to him. Erato's repaired ship lifts off and successfully wraps the star in aluminium, diverting it's course and saving Chloris. The Doctor brings the people of Chloris a trading agreement from Erato.

Hmmm. I dislike this episode an awful lot. The main thrust of what's been going on, the Creature in the Pit, is all wrapped up terribly quickly as Erato uses the device to communicate and reveals what happened to him

ERATO: Please allow me to explain. This is not the Doctor speaking. I am simply using his larynx. We Tythonions don't have them.
ROMANA: Ask its name.
ERATO: My name is Erato.
ROMANA: Where does it come from?
ERATO: I am from the planet Tythonus.
ROMANA: Then what are you doing here skulking about in a pit eating people?
DOCTOR: Oh, please! You put that very crudely.
ERATO: To skulk about in pits, as you so crudely put it, is not my normal habit. I most emphatically do not eat people. I live by ingesting chlorophyll and mineral salts. I would have you know that I am the Tythonian High Ambassador.
ORGANON: Really?
ERATO: I am. I was on a trading mission to this planet when I
DOCTOR: Of course! I should have guessed instantly. It's all the fault of that woman Adrasta. 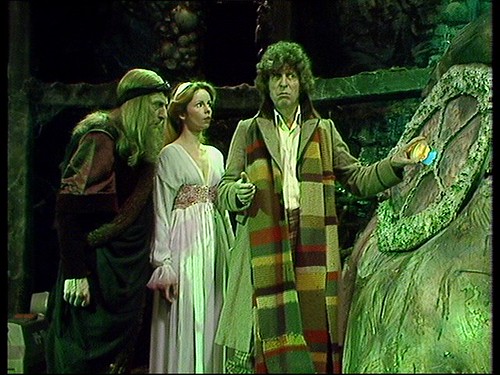 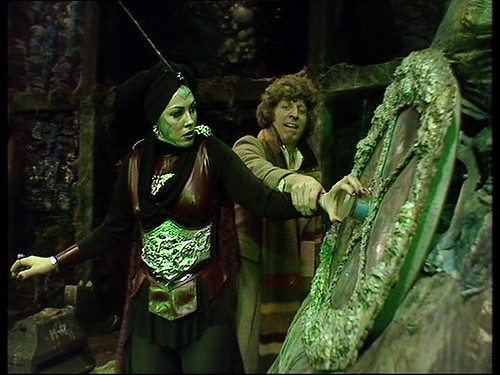 DOCTOR: Erato came here fifteen years ago to propose a trading agreement. Tythonus is a planet rich in metallic ores and minerals. Am I not right, K9?
K9: Checking data banks. Affirmative, master.
DOCTOR: That was a good guess.
ADRASTA: Fools! You listen to the opinions of an electric dog?
DOCTOR: The Tythonions exist on ingesting chlorophyll. Large quantities of it, judging by their size. Now, there's a superabundance of planet life on Chloris, so
ROMANA: So Erato came here to offer you metal in return for chlorophyll. Of course!
DOCTOR: Right. But who was the first person he met?
ORGANON: The person who held the monopoly of metal here.
DOCTOR: Right. And did she put the welfare of her struggling people above her own petty power? No. She's tipped the ambassador into a pit and threw astrologers at him.
HUNTSMAN: Is this true, my lady?
ADRASTA: Not a word of it. It's a pack of lies.
DOCTOR: Let's see if Erato agrees with me, shall we?
ADRASTA: That won't prove anything! You just take hold of that thing and say exactly what you like. You expect intelligent people to fall for your childish tricks?
DOCTOR: Well, it's very simple. Why don't you come over here, take hold of the communicator and we'll hear the truth from your larynx.
ADRASTA: What? No. Don't talk such rubbish. Huntsman, I order you to kill the Doctor!
HUNTSMAN: My lady, I think we want to hear the truth of this. Go and speak with the Creature.


ERATO: Your deductions are, of course, correct. We are running dangerously short of chlorophyll on Tythonus, and have more metal than we need. Reports reached us of this planet Chloris which had precisely the opposite problem, and we thought that a trading agreement would be mutually beneficial.
ADRASTA: It's lies, lies! It's all lies!
ERATO: No, it is you who are lying. Unfortunately, I ran foul of this evil woman who tricked me into the Pit. If you will forgive me, I have a score to settle.

So having got the explanations for what going on out the way in the first 1/3 of the episode the rest seems like something added onto the end to extend the story for 2/3 of an episode. Out of nowhere seemingly the entire planet is in danger and The Doctor must save it!

ERATO: What I have to tell you is no more pleasant for me than it will be for you, but it has passed beyond my
DOCTOR: Oh do get on with it.
ERATO: I'm afraid you have only twenty four hours to live.
ROMANA: What!
DOCTOR: Shush. Romana, the communicator.
ERATO: I came as an ambassador to buy chlorophyll, but Adrasta imprisoned me. However, she failed to prevent the other half of my ship from communicating that fact to my brothers on Tythonus. They will have taken that as an act of aggression and responded accordingly.

By firing a Neutron Star at Chloris? Surely someone would have noticed an object moving across the night sky towards the plane and growing bigger? Or are we relying on Astrologer Organnon being the only one who looks up? And if Chloris is destroyed then the chlorophyll the Tythonions want is going to get destroyed too! Nobody's going to win! 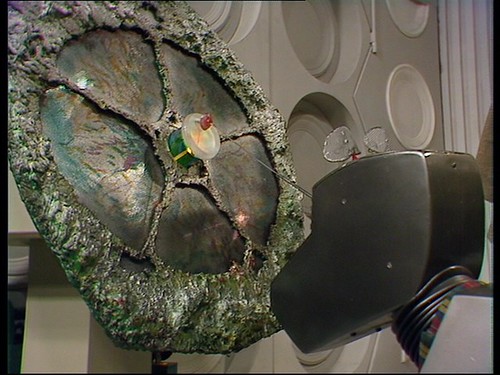 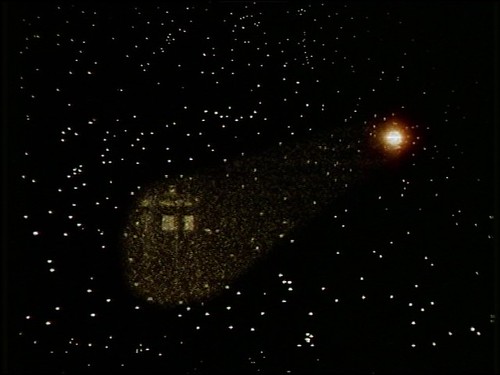 This element of the plot comes from absolutely nowhere! Did they get quite late in the day and realise the script was running short or something and need some extra scenes primarily set in the Tardis bolted on? It desperately needed some form of signposting earlier in the story which it didn't get so blame has to be laid at the fee of writer David Fisher and Script Editor Douglas Adams, both of whom should have picked this flaw up!

Creature from the Pit's execution isn't the best but the concepts are good: Evil beautiful woman with trapped good but hideous alien is reminiscent of Galaxy Four while the idea of a plant rich but metal poor civilisation coming into contact with one with the opposite problem is clever as is the idea that the first person the ambassador from the metal planet coming into contact with is someone with the monopoly on metal and thus an interest in preserving the status quo. After this it all falls apart with especial blame being laid at the feet of the monster. Not my favourite story.

This is the last Doctor Who story directed by Christopher Barry. His complete Doctor Who CV reads The Daleks (episodes 1,2,4,5 only), The Rescue, The Romans, The Savages, The Power of the Dalek, The Dæmons, The Mutants, Robot, The Brain of Morbius & The Creature from the Pit. He's also directed for Moonbase 3 and The Tripods, plus a range of other BBC productions over the years.