518 Nightmare of Eden: Part One

"Interfere? Of course we should interfere. Always do what you're best at, that's what I say!

The spaceliner Empress comes out of Hyperspace into orbit around the planet Azure but due to an error by the co-pilot Secker it collides with and ends up fused with another ship the Hecate. The Tardis arrives and, seeing the unstable matter interface between the ships, the Doctor decides to interfere and poses as an investigator from Galactic insurance & salvage. He meets captain Rigg, the commanding officer of the Empress, and Mr Dymond, the owner of the Hecate. The Doctor comes up with a plan to separate the ships. Secker is told to take the Doctor to the power room, but behaving oddly, leaves him. The Doctor & K-9 follow and discover Secker using the banned drug Vraxoin. Romana meets Tryst, and his assistant Della, engaged in a survey using his CET machine which keep matter in a crystal in the machine. The Doctor tells Rigg that he thinks Secker is using Vraxoin. The drugged up Secker wanders into an unstable matter interface. The Doctor asks Tryst about where he has visited, but Dymond is keen to get his ship separated so he has Rigg take him to the Power Unit. Tryst reveals to Romana that a member of their crew was killed on the journey. Romana examines the projections of the planets Tryst has been to and catches sight of someone inside the Eden projection. Della reveals that it was on Eden the lost their other crew member. Trying to reach the power unit the Doctor finds his path blocked by a matter interface. He hears a scream and a bloodied Secker falls out of the interface. Returning to where Secker keeps his drugs the Doctor is shot. Tryst is shown Secker, who dies, and guarantees to Rigg he has only bought recording not live specimens aboard. Romana & K-9 find the Doctor. Romana wonders if the creatures could have escaped from the machine through the unstable matter interface and is sent to examine the CET machine where she is attacked by something in the Eden projection. K-9 starts to cut his way through to the power room but once the hole is complete a rampaging monster is revealed 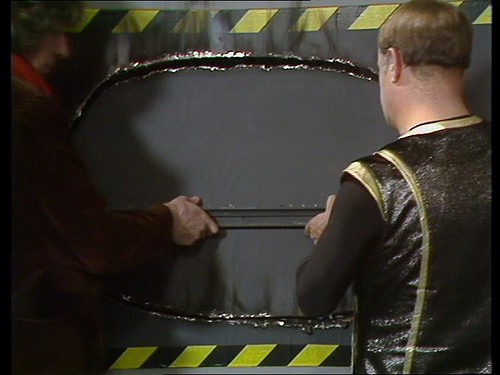 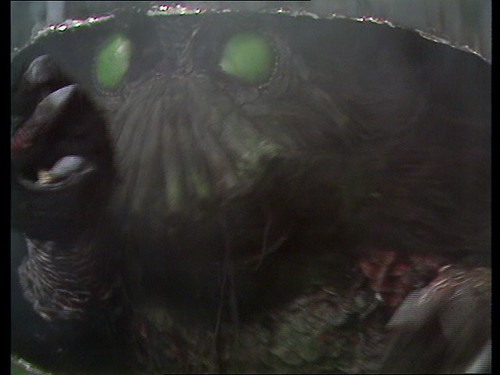 Ooops, you can see the outline of the section the Doctor & Rigg remove before K-9 starts cutting it! 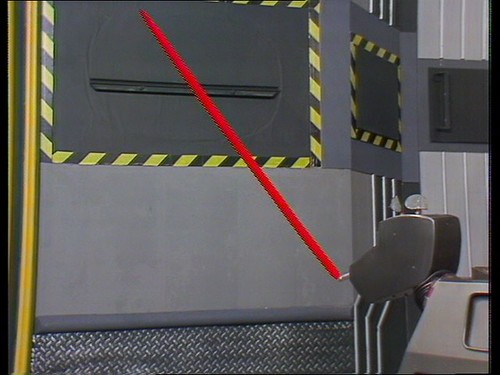 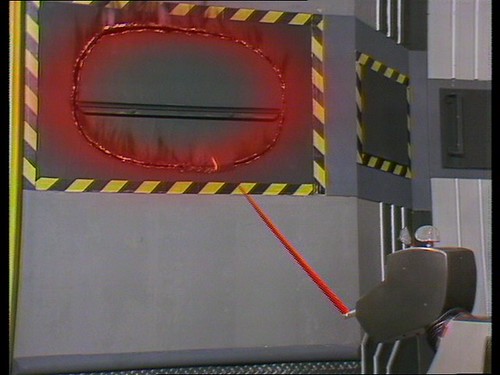 That's not a bad episode, plenty going on with some reasonable, if functional & unspectacular, sets. Most of the performances aren't bad but Lewis Fiander's accent as Tryst is more than slightly dubious and reminds me a lot of Gag Halfrunt from the The Hitchhiker's Guide to the Galaxy Radio Series

There's some nice ideas floating around in Bob Baker's first and only solo story for Doctor Who. ) 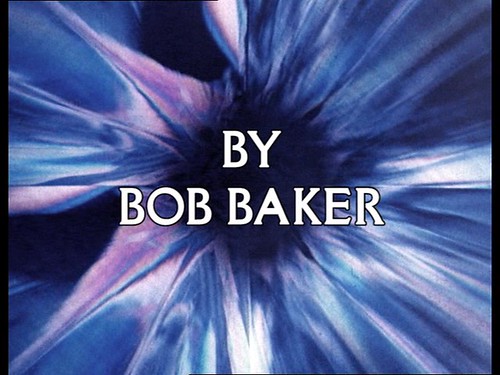 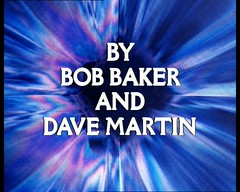 All of Bob Baker's previous stories for the show - Claws of Axos, The Mutants, The Three Doctors, The Sontaran Experiment, Hand of Fear, Underworld and the Armageddon Factor - had been written in partnership with Dave Martin.

The fused ships coming out of Hyperspace is good but the CET Machine is startlingly reminiscent of the Scope seen in Carnival of Monsters. The drugs angle to the plot is a surprisingly adult one for Doctor Who to be tackling at this time. 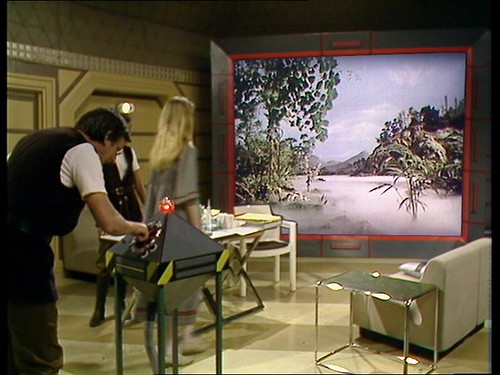 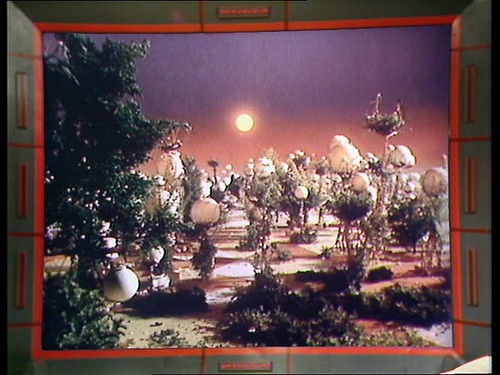 Do some of the Backgrounds of the environment shown from the CET machine look familiar? They're from footage from model sequences created for several Space 1999 episodes: The planet Retha from Full Circle, Piri from Guardians of Piri and Terra Nova from Matter of Life & Death together with a new set for Eden! 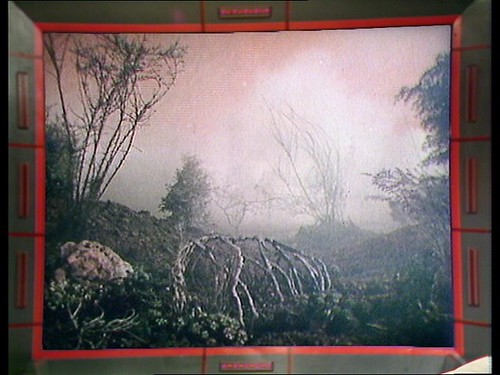 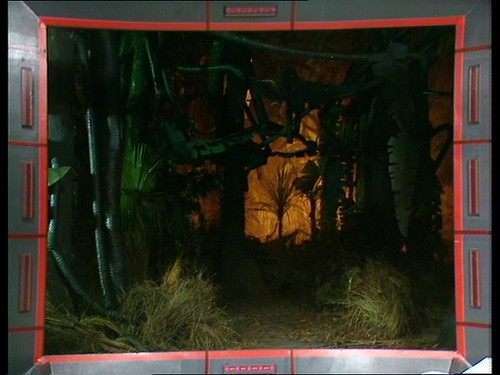 Captain Rigg of the Empress is played by David Daker who was Irongron in director Alan Bromly's only previous Doctor Who story The Time Warrior. He'd previously been in UFO as a SHADO Guard in Flight Path, the last episode of Porridge, Final Stretch, as Jarvis and Time Bandits as Kevin's Father. He's probably best known for playing Harry Crawford in Boon. 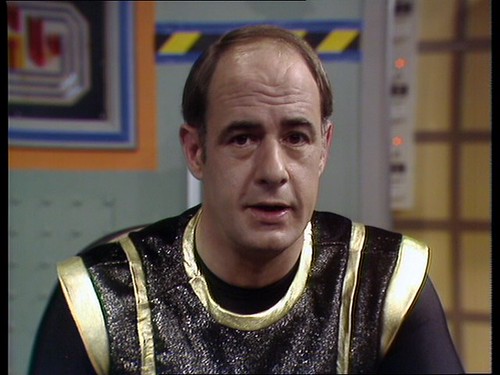 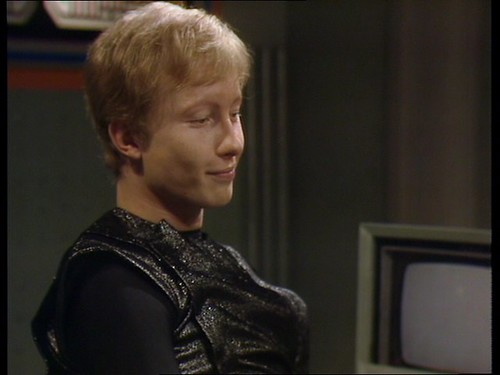 His copilot Secker is played by Stephen Jenn. He would appear in Blake's 7: Ultraworld as Ultra 2 in that show's third season broadcast early the next year.

The Hecate's captain Dymond is played by Geoffrey Bateman. You can see him in The Professionals episode Backtrack as Anson. 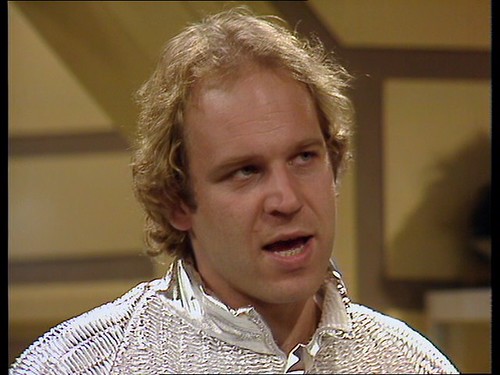 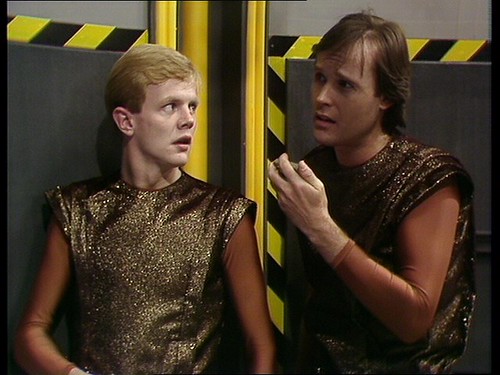 Richard Barnes is the only credited Crewman in this episode and thus is the one on the right who speaks! there's two other uncredited crewmen, Simon Sutton, who returns as the lookout in Planet of Fire, and Mark Kirby, who was in 2 Blake's 7 episodes: Killer as Communications Technician / Firefighter and Gambit as a Customer / Gambler. However I'm not sure which of them the actor to the left of the picture is!

Australian Actor Lewis Fiander plays the scientist Tryst. He can be seen in The Sweeney television episode In from the Cold as Ashby-Jones and their second film, Sweeney 2, as Gorran. 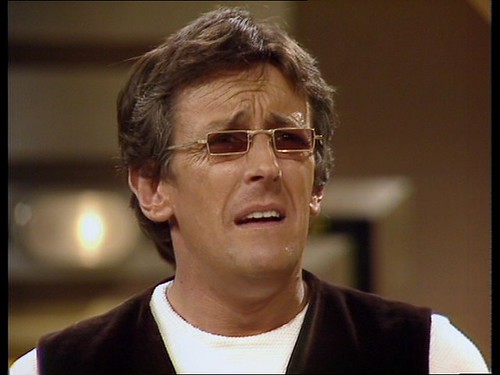 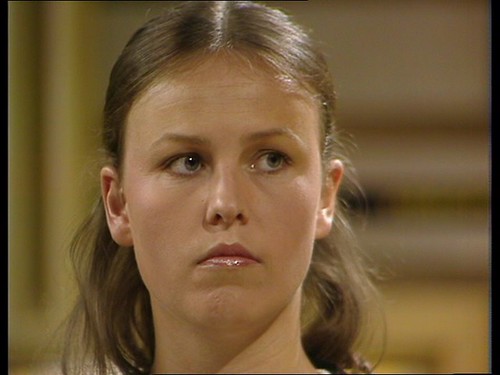 Jennifer Lonsdale plays Tryst's assistant Della. She appears as a technician in all 6 episode of the widely derided science fiction sit-com Come Back Mrs. Noah as a Technician.

The Stewardess was Sally Sinclair who was the Levitating Girl in Talon of Weng Chiang. In Blake's 7 she was a Mutoid in Pressure Point and a Space Rat in Stardrive.

The Computer Voice was Pamela Ruddock.