The Marshmen advance on the Starliner. The Doctor becomes interested in the maintenance work being carried out there. The Tardis materialises on the Starliner bearing the missing outlers. The Doctor takes Adric and the Tardis back to the cave where they collect a dazed Romana, the damaged K-9 and a dead spider. Dexeter wishes to experiment on captured Marshman. The Outlers are put to work on maintenance duty. The Tardis returns to the Starliner just as Dexeter is about to dissect it. In the Tardis an infected Romana detects it's pain and screams as the creature breaks it's bonds going on a rampage and killing Dexeter before it is accidentally electrocuted. The enraged Doctor reveals to Login that the starliner is ready to take off but Nefred denies they have procrastinated however they are missing the knowledge of how to fly the ship. The Doctor & Login examine the spiders and the Doctor recognises the sample from somewhere. Romana escapes from the Tardis descending to the depths of the Starliner where she opens the escape hatches admitting the Marshmen to the ship. 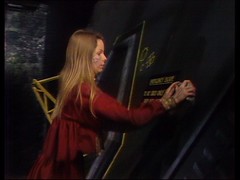 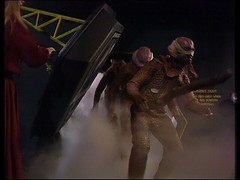 Hmmmm, as a story this is progressing quite nicely but there's something not quite right about what's going on..... and I think it's the lack of Doctor. There's not much of him in the last two episodes. What there is is good but we keep cutting to the Outlers who I couldn't give a stuff about and Romana who's getting increasingly annoying! 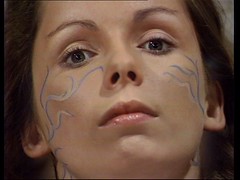 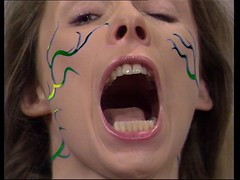 Her possessed make up is nice, a vraiant on the cyber virus last seen in Revenge of the Cybermen.

Playing Decider Login is George Baker This is his first and only Doctor Who appearance but he been in absolutely everything you'll have ever seen: He was in Curse of the Fly, which is great for spotting 60s Doctor Who props in, as Martin Delambre and played The New Number Two in Arrival thr first episode of he The Prisoner. He's been in 3 James Bond films playing a NASA Engineer in You Only Live Twice, Sir Hilary Bray in On Her Majesty's Secret Service and Capt. Benson in The Spy Who Loved Me which makes his Up Pompeii! appearance as Jamus Bondus in Secret Agents Jamus Bondus more amusing! He was in Doomwatch as John Mitchell in Train and De-Train, which survives and can be seen on The Doomwatch DVD, and Survivors as Arthur Wormley in Genesis. In I, Claudius he played the Emperor Tiberius and in Robin of Sherwood he was The Prophecy, Herne's Son & The Power of Albion. Late in his career he found fame as Det. Chief Insp. Wexford in The Ruth Rendell Mysteries. 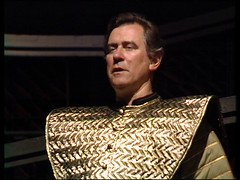 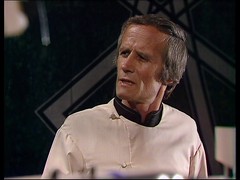 Tony Calvin plays the scientist Dexeter. He was in The Professionals as Terry In the Public Interest.

Decider Nefred is James Bree He was was previously in Doctor Who as the Security Chief in the War Games and he'll be back as the Keeper of the Matrix in the final 2 episodes of The Trial of a Timelord. He'd been in The Prisoner episode Do Not Forsake Me, Oh My Darling where he plays Villiers and goes onto appear in I, Claudius as Montanus in Poison Is Queen, The Sweeney as Saxby in Money, Money, Money and The Professionals as Grant in Man Without a Pas. On the big screen he appears in George Lazenby's only James Bond film On Her Majesty's Secret Service as Gebrüder Gumbold. 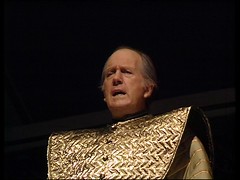 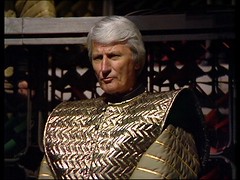 This is the last appearance in Doctor Who by Alan Rowe who plays Decider Garif. He was previously in The Moonbase as both Dr. Evans & the Space Control voice, The Time Warrior as Edward of Wessex and James Skinsale in Horror of Fang Rock. His IMDB entry shows he was a much in demand actor. I thought I Doctor Who was the only thing I've seen him in but my most recent look at IMDB spotted Inspector Morse: The Death of the Self where he played Alistair Haines. He was the partner of actor Geoffrey Bayldon who speaks about Rowe and their relationship during Whos' Round #117.

We're still making our way through the mass of Starliner Dwellers/Citizens in this story. This lot are in all four episodes, but not the film sequences in episode 1:

Robin Squire had previously been the show's Assistant Script Editor at the start of the Third Doctor's time and, as a non equity card holder he was pressed into service as an emergency stand in Squire was so good that he was used for all the main Auton appearances as credited as the suspiciously sounding Ivor Orton..... . He returned as the BBC3 TV Cameraman in The Dæmons and later this season plays a Pharos Project Technician in Logopolis.

Steve Ismay had been a BBC3 TV Crewmember in The Dæmons, a Guerilla & Stills Cameraman in Day of the Daleks, Sea Devil in The Sea Devils, Varan's Bodyguard in The Mutants a Presidential Guard in Frontier in Space and a Security Guard in The Green Death. He's in every story in season 10 playing a UNIT Soldier in The Time Warrior, an Army Soldier in Invasion of the Dinosaurs, an Exxilon & Exxilon Zombie in Death to the Daleks, a Guard in The Monster of Peladon and a Metebelis 3 Guard in Planet of the Spiders. He then plays a Guard in The Deadly Assassin, a Leviathan Guard in Ribos Operation, a Gracht Guard & one of Zadek's Guards in The Androids of Tara then would have been a "Space Monster" in Shada, possibly a Cyberman. He returns as a Cyberman in Earthshock. and a Security Guard in Time Flight. He had been a Man in the Doomwatch episode The Islanders & Flood, and then appears in The Sweeney as a Policeman in Cover Story, a Driver in Golden Boy and a Villain in Stoppo Driver. In Porridge he played a Prison Warden in A Night In and a Gardener in Happy Release while in The Tomorrow People he was in a Vesh Rebel in Worlds Away and an SIS Sergeant in The Dirtiest Business. In Blake's 7 he plays a Scavenger in Deliverance, a Guard in Dawn of the Gods, a Convict in Moloch and a Hommik in Power.

Stephen Kane had been an IR Guard in Exchange Hall in The Sunmakers. He returns as a Citizen in Full Circle. Blake's 7 he was a Customer / Gambler in Gambit.

Bobby James, who evades me on IMDB, was a a Gallifreyan in Invasion of Time, a Engineer in Creature from the Pit, He returns as a Citizen in Full Circle. He may or may not be the Bob James who was a Villager/Coven Member/UNIT Soldier in The Daemons.

Jerry Judge was a Bearer in Creature from the Pit He returns as a Kinda in Kinda, a Buccaneer Officer in Enlgihtenment, a Man at Arms in King's Demons and a Soldier in Caves of Androzani.

Katy Jarrett had been an Anethian Sacrifice in Horns of the Nimon and later plays a Daymaid in Ghost Light. She caught my eye in Horns of the Nimon as reminding me of someone but try as I might I cannot spot her in this story! She was scheduled to be part of a group of Tourists at Windsor Castle in Silver Nemesis but the actors planned to be used were replaced with cameos from those conected with the show. She can be seen in the Roger Moore James Bond film Octopussy as a Circus Guest, Supergirl as an Argonian Citizen and Agatha Christie's Miss Marple: The 4:50 from as Miss Marple's Housemaid Mary. She also acts under her given name of Catherine Munroe and uder that appeared in The Empire Strikes Back as Zuckuss and Wiorkettle. She regularly appears at Star Wars coventions and has a website at http://www.cathymunroe.com/.

Tim Goodings was a member of the Pangol Army in The Leisure Hive. and returns as a Crewmember in Earthshock. Attempts to identify him there make us think he has red hair.

Nikki Dunsford returns as Trooper Austin in Earthshock. In Blake's 7 she was a Hi-tech Patient in Powerplay and Watching Blake's 7 thinks she's the Mutoid in Moloch.

Mykel Mills Returns as a Plasmaton in Time-Flight, a Lazar in Terminus, plus one of the Wrack Deck Crew & Striker Deck Crew in Enlightenment. In Star Wars he is Red Seven Elyhek Rue.

I can't Find Martin McEnvoy, David Brody, Alexander Joanner or Amanda Winn on IMDB nor can I see any further Doctor Who appearances for them.