"Why can't people be nice to one another, just for a change. I mean, I'm an alien, and you don't want to drag me into a swamp, do you?"

Romana gives Adric a homing device for the Tardis as he leaves to warn the other outlers. In the short time in the Tardis his injuries have healed. The Outlers decide to use the homing device to find the Tardis to shelter from the mists where they take Romana prisoner. The Doctor has K-9 follow the Marshmen. Decider Nefred, now in charge, has read the secret system files and is burdened but what he has read. Login accepts the offer to join the Deciders. From within the Tardis sudden lurches violently and when the Doctor returns he finds it gone. Exposed in the mists the Doctor uses the Sonic Screwdriver to break into the Starliner. He is followed in by a juvenile Marshman. Nefred speaks to the the people of how the Starliner brought them from Terradon and how they must labour to get it functional again. The Tardis comes to rest, Romana discovering the Marshmen have carried the Tardis to the cave the Outlers use. The Doctor and the Marshman are captured on the ship and taken before the Deciders. K-9 tracks the Tardis to the cave but the Marshmen smash his head off. Romana deduces that the Marshmen intend to use the Tardis as a battering ram to breach the Starliner. Romana goes outside to find why the Marshmen have left but he Outlers, scared by the spiders hatching from marsh fruit, shut the Tardis doors on her and accidentally dematerialise, leaving Romana in the cave where she is bitten by one of the spiders and falls unconscious. 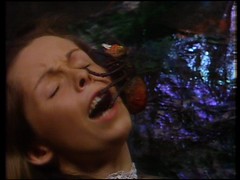 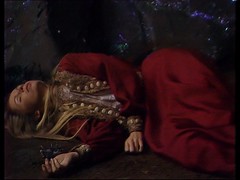 Not bad there, with some background to the humans on the planet revealed: they're the descendants of the crashed starliner trying to escape from the planet. We've seen the Tardis physically removed before (Space Pirates & Frontier in Space spring to mind) as the Marshmen do in this episode but is this the first time the Tardis has dematerialised without the Doctor or another Time Lord aboard?

All locations for this story are found in Black Park in Buckinghamshire. 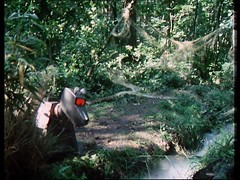 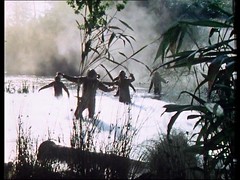 The scenes of the Marshmen coming out the swamp would seem to owe something to the Sea Devils coming out of water many years before!

We've got a case of a familiar household object turning up in the story as something else: The walls of the Deciders room are obviously milkcrates! 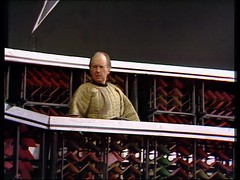 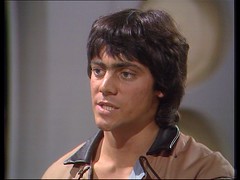 Richard Willis, playing Adric's older brother Varsh, has a link to another Doctor Who cast member: he was the third husband of Kate O'Mara, who later plays The Rani.

I've seen Bernard Padden, who plays Tylos, on he big screen when he appeared in Erik the Viking as Mordfiddle the Cook. 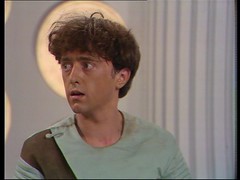 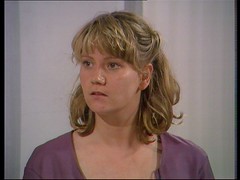 June Page plays Keara, the lone female Outler and Decider Login's daughter. She was in three episodes of Survivors, New Arrivals, Over the Hills & New World, as Sally.

Norman Bacon plays the Marshchild. He had been an Other in The Sunmakers and returns as a Dalek Operator in Rememberance of the Daleks He's been in Out of the Unknown as the Boy in the missing fourth season story Taste of Evil and appeared in the Blake's 7 episode Gambit as Cevedic's Heavy. 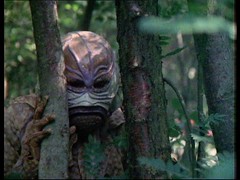 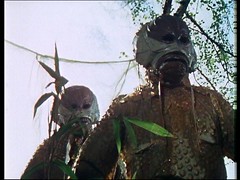 Down in the DWAS Production File as "Marsh Leader", presumably the Marshman Leader, is Steve Kelly. He'd been a UNIT Soldier in the Invasion, a UNIT Soldier in the Ambassadors of Death, and an Ogron in Frontier in Space,. He returns as the Marshman leader in Full Circle and a Sea Devil in Warriors of the Deep. In Blake's 7 he's a a Scavenger in Deliverance, a Customer / Gambler in Gambit, a Goth Guard in The Keeper, a Hommik Warrior in Power and a Plantation Bounty Hunter in Blake. In Doomwatch he was a Man in Re-Entry Forbidden, a Man in The Islanders and the Lieutenant in Flood. In Monty Python's Flying Circus he was a Viking in Spam and in Fawlty Towers a Lorry Driver in Gourmet Night and an Ambulance Driver in The Germans. He's also in The Young Ones episode Cash.

The only credited Mashman is Barney Lawrence on his Doctor Who debut. He returns as a guard in State of Decay, a Foster in The Keeper of Traken, a Kinda Hostage in Kinda, the Male Android Silhouette in Earthshock, Air Steward Dave Culshaw in Timeflight, Tanha’s Bodyguard in Snakedance, a member of Striker's crew in Enlightenment, a Marine Guard in Warriors of the Deep, and a Trooper in Resurrection of the Daleks. He was in Blake's 7 as a Federation Trooper in Time Squad & Bounty, a Guard in Traitor and Zukan's Technician in Warlord.

Stephen Calcutt was a Muto in Genesis of the Daleks and a Mute in The Armageddon Factor. He returns as the Snake in Kinda. He was also a Transylvanian in The Rocky Horror Picture Show and appears in Flash Gordon as an Azurian Man. In Rentaghost he was Leonardo da Vinci in the third episode of the second series, still unreleased on DVD!

Graham Cole who would later go on to find fame as PC Tony Stamp in The Bill. He should have been seen last season as a young scientist in the cancelled Shada so made his actual debut inThe Leisure Hive as a Zero Gravity Squash Player He returns in Keeper of Traken as the Melkur, Kinda as a Kinda tribesman (there's two other Bill cast members in that one!), Earthshock as a Cyberman, Time-Flight as Melkur, The Five Doctors as a Cyberman, Resurrection of the Daleks as a Crewmember & Duplication Body and The Twin Dilemma as a Jacondan.

Keith Guest returns as a Security Guard in Logopolis and a Villager in The Visitation.

James Jackson returns as a Guest Gambler in Enlightenment.

This is Stephen Watson's only Doctor Who appearance. He goes on to appear in No Place Like Home as Paul Crabtree where he made national news when he died, aged 26, while on his honeymoon in Spain, just before the fourth series of No Place Like Home was screened but after most of the episodes had been recorded.

There's a small bunch of Actors who are Citizens in episoders 2 & 4 only:

One of the actors presents a problem: we believe there are TWO Davd Coles who have worked on Doctor Who. There is a David Cole who played Billy Clanton in 1966's Gunfighters He was born on April 8, 1936 so, aged 43, is likely to have still been working at this time. During this period fro the late 70s through to the mid 80s there's a supporting artist under this name playing a Crewman in Nightmare of Eden, a Student in Shada, a member of the Pangol Army in The Leisure Hive, a Savant in Meglos, a Citizen in Full Circle, a Kinda in Kinda, a Student in Arc of Infinty, a Schoolboy in Mawdryn Undead, a Mutant in Mawdryn Undead, One of Ranulf's Knights, a Spectator & a Beggar in King's Demons and a Trooper in The Awakening. Some of those could well be the David Cole from the Gunfghters but The Students in Shada & in Arc of Infnity and the Schoolboy in Mawdryn Undead would seem to require a much younger actor and indicate that there is a second one so who knows qute how these roles are split!

Colin Cook returns as a Citizen in Keeper of Traken and a Castrovalvan Man in Castrovalva.

Harry Payne played one of the Pangol Army in The Leisure Hive. He returns as Kinda in Kinda, and a Soldier in Caves of Androzani

Clark Stephens Returns as the first Concorde's First Officer and a Passenger in Tinme Flight.

Penny Rigden returns as a Colonist in Frontios and a Lakertyan in Time and the Rani.

Two actors whose only Doctor Who appearance is as Full Circle Citizens but have been in Blake's 7: Val Clover was a Patient in Hospital Ship in Powerplay and a Mourner in Sarcophagus while Nigel McLaughlan was a Federation Trooper in Rumours of Death.

A Full Circle citizen is Marcus Campbell's only Doctor Who role

Finally the DWAS Production file has a note that Alys Dyer was booked, but not used. She was Baby Pangol at the end of The Leisure Hive and returns as a Child in Trial of a Timelord: Mystertious Planet with Lucy Dyer - is that her sister?

At 3.7 million viewers this episode has the second smallest audience of any Doctor Who episode so far and the smallest since the 3.5 million recorded for The War Games part 8!