"You're not from the village!"

We've got bats, we've got a castle, we've got villagers in thrall to their lords, who are nice and pale. 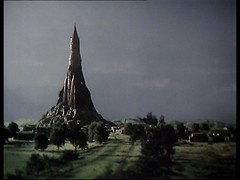 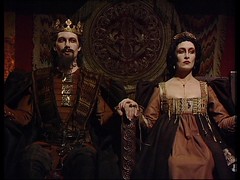 Yup Doctor Who finally does Vampires it would seem. All done very well here.

DOCTOR: Please, don't shout. Splendid, I'm sure. So you serve the Lords, but what do the Lords do for you?
IVO: They protect us from the Wasting.
DOCTOR: Did you say the Wasting?

We're gifted some local history courtesy of the rebels:

ROMANA: How long have things been like this?
KALMAR: Forever. The Lords rule in the Tower, the peasants toil in the fields. Nothing has changed in a thousand years.
TARAK: But it will change when we overthrow the Lords.

And how the rebels came to be formed:

DOCTOR: How long ago was that?
TARAK: Years ago. Some of us were on the run from Zargo and his men. We escaped into the wasteland and discovered this, all kinds of wonderful things just thrown about, half hidden. There was even food, mountains of it.
KALMAR: Some of us could still read. It's forbidden, but the knowledge was passed on in secret.
DOCTOR: What? Reading forbidden?
KALMAR: All science, all knowledge is forbidden by the Lords. The penalty for knowledge is death.
ROMANA: No schools of any kind?
KALMAR: Children start in the fields as soon as they can walk, stay there till they grow up, grow old and die.
TARAK: Those that escape the selection.


But the real revelation here come rather quickly when the Doctor & Romana turn their attention to the ancient technology the rebels found:

DOCTOR: Definitely an Earth device.
ROMANA: Ship's manifest and cargo, flight plan from Earth. So it is Earth. Crew of exploration vessel Hydrax en route from Earth destination Beta Two in the Perugellis sector.
DOCTOR: Instead of which they finish up here.
ROMANA: Hmm, they must have gone through a CVE as well.

What, another crashed spaceship straight after the Starliner in Full Circle? 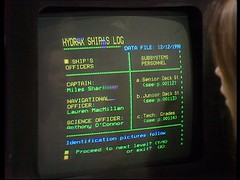 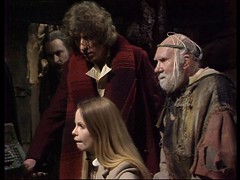 ROMANA: Ship's officers, Captain Miles Sharkey, Navigational officer Lauren MacMillan, Science officer Anthony O'Connor. Identification pictures follow. It's still legible.
DOCTOR: Yes, not bad after a thousand years in memory.
TARAK: Those faces!
DOCTOR: Yes, long since dead.
TARAK: I was a Tower guard before I joined Kalmar. I saw them every day.
DOCTOR: What?
TARAK: But, as you say, it can't be.
DOCTOR: Who did you see every day?
TARAK: The three who rule. The King, his Queen.
DOCTOR: That's two.
TARAK: And Aukon, the councillor. No, I'm sorry, I see their faces everywhere. If you knew these people, Doctor
DOCTOR: Well, I think it's time we got to know them, don't you, Romana? 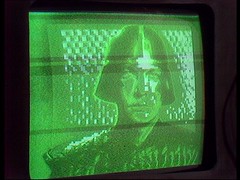 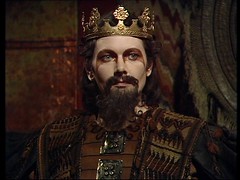 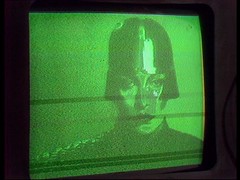 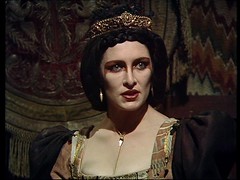 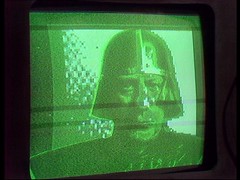 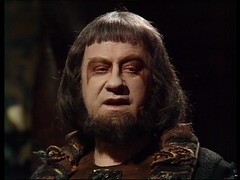 Now where were? Ah yes: 3rd September 2017 when we did Horror of Fang Rock part 1. The then script editor Robert Holmes had commissioned his old friend (and former Doctor Who script editor) Terrance Dicks to write a story based on one of the few horror tales they hadn't previously "paid homage to" over the last few years: Dracula. Dicks duly supplied the scripts for "The Witch Lords"/"The Vampire Mutation" only to then have the story spiked (staked?) when high ups at the BBC realised it would be airing at a similar time to the prestigious adaptation of the original story, Count Dracula. So Terrance Dicks was sent away to write another script in an extreme hurry and given the instruction to "set it in a light house". Dicks' original script went into a drawer where it stayed for three years until John Nathan-Turner & Christopher H. Bidmead found themselves with no other script ready to go at the start of this season. Uncle Terrance gets a call and quickly refreshes his script to take into account the change in companions and that we're in E-Space. One quick change of title later and State of Decay was ready to go as the second story filmed that season, straight after the Leisure Hive and before Meglos & Full Circle which preceded it. 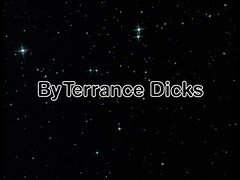 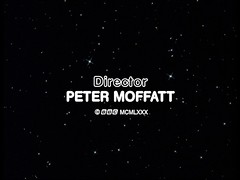 This is a first Doctor Who for Director Peter Moffatt who had previously worked with new Producer John Nathan-Turner on All Creatures Great and Small and he does a decent job, with some fabulous little graphical touches like overlaying the bats on Aukon's face. 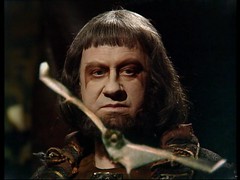 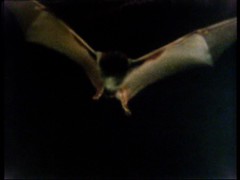 We'll be seeing him regularly over the next few years as he returns to direct The Visitation, Mawdryn Undead, The Five Doctors, Twin Dilemma and The Two Doctors. He is, equal with Ron Jones and Chris Clough, John Nathan Turner's most used director.

Lots of cast, and we'll cover many of the ones missed here as the story progresses. Clinton Greyn plays innkeeper Ivo. He'll return to Doctor Who in the Peter Moffatt directed The Two Doctors where he plays the Sontaran commander Stike and later appears as another Sontaran in the Jim'll Fix It mini episode A Fix with Sontarans. He appears in UFO as Mark Tanner in The Dalotek Affair. 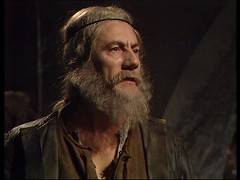 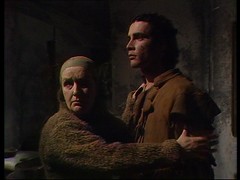 Ivo's wife Marta is played by Rhoda Lewis. She appeared in the Doomwatch episode Public Enemy as Mrs. Freeman. She's also in the Barry Letts/Terrence Dicks production of Dombey and Son playing Louisa Chick and later has a semi regular role in the BBC Miss Marple stories playing village shopkeeper & postmistress Mrs Brogan in A Pocketful of Rye, 4.50 from Paddington and The Mirror Crack'd from Side to Side.

Their son Karl is played by Dean Allen.

Onto the Peasants in the inn:

Ernest Jennings was in The 1st Man in Market in The Romans: All Roads Lead to Rome, a Highlander in Jail in The Highlanders and one of the Old Scientists in Shada. He returns as as the Aged Rebel in The Trial of a Time Lord: Mindwarp.

Dennis Hayward was a Scotsman in Hold/Highlander in The Highlanders, an Auton/Display Mannequin in Spearhead from Space and a Control Room Assistant in The Ambassadors of Death. He's in Blake's 7 as a Federation Trooper in Warlord and Doomwatch as a Man in The Islanders.

Jimmy Mac had been a Refugee Priest in The Underwater Menace, a Man in Pub/Coven member in The Daemons, a Noble in Androids of Tara and a Peasant in the Village Centre in State of Decay. He returns as an Extra in The Awakening. In Doomwatch he's a man in The Islanders. He's a semi regular in Are You Being Served? as Warwick in The Junior, Anything You Can Do, A Personal Problem & Lost and Found. In Dad's Army he's a Platoon Member in Number Engaged and in Hi-de-Hi! he's a Camper At Table in Desire in the Mickey Mouse Grotto.

Eileen Winterton Slave in Day of the Daleks In Some Mothers Do 'Ave 'Em she's a Parent at Toy Fair in Learning to Drive and in Are You Being Served? she's a Shop assistant in Gambling Fever. There's some discussion if the biographical details and earlier roles on her IMDB entry belong to the same actress!

Laurie Goode was a Mutant in The Mutants, a guard in the Time Monster, a Time Lord in The Invasion of Time, a Bandit in The Creature from the Pit. and a Tigellan in Meglos. He returns as a Tharil in Warriors' Gate, a Sailor on the Shadow in Enlightenment, a Colonist in Frontios, a worker in Trial of a Timelord: Mysterious Planet and a British Unit Trooper in Battlefield. He's in Blake's 7 as a Hi-tech Patient in Powerplay, Survivors as a Looter in The Chosen and Star Cops as a Dealer in Little Green Men and Other Martians. He was a Looter in the Survivors episode The Chosen, the Jogger in The Hitchhiker's Guide to the Galaxy, a Pirate Rat in the The Box of Delights episode In Darkest Cellars Underneath and appears twice in The Sweeney as Laurie in Queen's Pawn and the Supermarket Manager in Trojan Bus.

Joe Phillips had previously been a Extra in Robot, had been a Coven Member in Image of the Fendahl. He also is one of the actors playing a Holidaymaker in this episode. He returns as a Peasant in Village Centre in State of Decay, a Patient in Frontios and a Schoolboy in Mawdryn Undead.

Jill Goldston was a Female Guest in The Masque of Mandragora, a Peasant in State of Decay, a Lady in Waiting in King's Demons, a Citizen/Unbeliever in Planet of Fire a Mutoid in Blake's 7: Animals and a Woman in Doomwatch: The Islanders.

Michael Joseph was a Tourist in Louvre in City of Death. In Return of the Jedi he's Janus Greejatus - Emperor Palpatine's Advisor

Tom Gandl had been a Citizen in Full Circle and returns as a Villager in The Visitation, and a Male Onlooker in Remembrance of the Daleks. In Blake's 7 he was a Kairos Guard / Labourer in The Harvest of Kairos.

Leon Lawrence returns as a Miner in Mark of the Rani.

Monty Morris was in Blake's 7 as a Prisoner in Cygnus Alpha Some Mothers Do 'Ave 'Em as the Extra Patient in Wendy House.

The Peasant in The Wood is Victor Croxford who had been an Auton/Hospital Porter in Spearhead from Space and a Laboratory Technician in Claws of Axos. He returns as a Villager in The Visitation.

The Rebels seen only in the film sequences in this episode include:

Paul Barton was previously a UNIT Soldier and a Silurian in Doctor Who and the Silurians, a Roundhead in The Time Monster, a Courtier in The Masque of Mandragora, a guard in Face of Evil, Marn’s Attendant in The Sunmakers and a Skonnos Guard in The Horns of Nimon. He returns as a Citizen/Unbeliever in Planet of Fire and a Walk on in Remembrance of the Daleks. He was in Doomwatch as a Man in Hear No Evil, Invasion and No Room for Error and appears in Moonbase 3 as a Technician in View of a Dead Planet.

Martin Clark had been a Soldier in Masque of Mandragora and a Time Lord in Invasion of Time. He returns as a Rebel in State of Decay, a Brown Time Lord in Trial of a Timelord: Terror of the Vervoids and The Ultimate Foe and a Husband at Garden Centre in Battlefield.

Timothy Oldroyd had been Pangol Body Parts & one of the Pangol Army in The Leisure Hive. He returns as a Kinda in Kinda, a Passenger in Time-Flight, a Vanir in Terminus and an Officer in Enlightenment. In Blake's 7 he was one of Gerren's Associate in Games.

Mark Middler had been one of the Pangol Army in The Leisure Hive and returns as a Foster in Keeper of Traken.