"Yes that settles it. We're out of our own time and space!"

Marshmen attack the Starliner inhabitants. A chance remark by The Doctor makes Adric recall Draith's last words of "We've come full circle" and, coupled with Adric's accelerated healing, the Doctor comes to a startling conclusion. He retrieves K-9's head from a Marshman that was using it as a staff top and finds the infected Romana. Adric finds an image translator for the Doctor. Login proposes bringing the Starliner population into the Decider's chamber but the other Deciders hesitate, allowing the Marshmen to storm the chamber, scattering the files everywhere and injuring Nefred. The Doctor tells Adric he believes the Tardis is in E-Space. The Doctor synthesises an antidote for Romana as Nefred tells Gariff & Login to seek out the Doctor to teach them how to fly the ship and leave Alzarius and that they did not come from Terradon and then passes away in the arms of the other elders. The Marshmen storm the science lab but are contained using oxygen cylinders. Romana attacks them but is overpowered and given the serum which cures her. Varsh is slain by a marshman covering his brother Adric's escape. The Doctor finds the same cells in the spiders, Marshmen & the deceased Dexeter and theorises that all three are the same life form, subject to rapid evolution. The Marshmen are driven from the ship by flooding it with oxygen. The Doctor reveals to Login & Gariff that the Marshmen are their ancestors that entered the crash ship, evolved, learned to read and took the ship as their own. Adric hides in the Tardis, leaving the image translator for the Doctor. The Doctor teaches them how to launch & fly the ship before leaving. The Tardis dematerialises, and K-9 is repaired. The image translator is installed proving that the Tardis is in Exo-Space having passed through a Charged Vacuum Emboitment (CVE) into this other universe. Their only option to get home is to find another CVE. 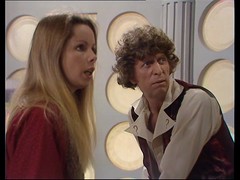 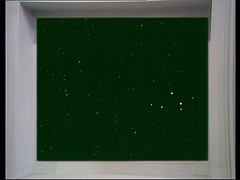 The climax to the story on the planet we now know is called Alzarius isn't bad and is packed with big clever ideas like the humans are an evolved form of the Marshmen which are in turn evolved from the spiders.

DOCTOR: How long's it supposed to be since the starliner crashed?
KEARA: Forty generations.
DOCTOR: Forty generations. That's a good round figure. Can't be right, though.
KEARA: Why not?
DOCTOR: Well, evolution goes in quantum leaps, but doesn't go that fast.
KEARA: What are you doing?
DOCTOR: Carrier type comparisons. Yes. Definitely morphological similar carrier types. Plus the inversions in bands eight to ten might be significant. I need to establish how long the evolutionary process has taken.
KEARA: From spiders to marsh creatures?
DOCTOR: From spiders to marsh creatures and beyond.

There's been hints at this in the previous episodes but here the full explanation comes out and in a bit of a rush. The problem is it's hard to identify with the Alzarians: the Outlers are annoying wingers, the Deciders are indecisive and if Adric & Login are the best characters in this bunch then you know you're in trouble! 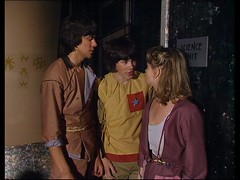 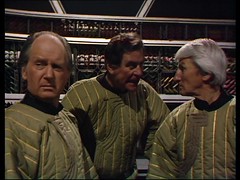 Decent monster rampage this episode though and the possessed Romana isn't bad either. 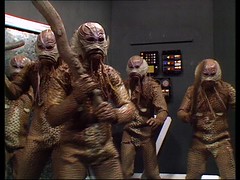 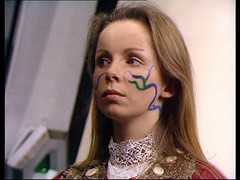 ROMANA: Hmm. Adric's left us a present.
DOCTOR: Really? An Image Translator! Loot! He stole that. Still It might come in useful.
ROMANA: It works!
DOCTOR: Yes unfortunately.
ROMANA: Negative coordinates.
DOCTOR: Yes that settles it. We're out of our own time and space, Romana.
ROMANA: Exo-space?
DOCTOR: Yes. What I think we came through was a Charged Vacuum Emboitment.
ROMANA: A CVE.
DOCTOR Hmmm. One of the rarest Space-Time events in the universe.
ROMANA: Doctor, look. The Starliner is taking off.
DOCTOR: Well, they made a decision.
ROMANA: And we're trapped. Unless we can find another CVE.
K9: Affirmative.

Hands up who knows what an Emboitment is? Didn't think so. I'm guessing that since Bidmead is involved it's some piece of real science but can I find out what it means? Whatever an Emboitment is, a CVE is meaningless gobbledegook, but we do know that passing through it has stranded the Tardis in another universe. Full Circle is the start of what's known as "The E-Space Trilogy" as the Tardis tries to escape from this extra dimensional realm. These three stories have another name, but I'll tell you that come the end of Warriors' Gate.

The following actors are Starliner Citizens in just part 4:

Peter Dukes was a UNIT Soldier in Invasion of the Dinosaurs and an Astronaut in Planet of Evil. He returns as a Man at Arms in King's Demons, an Extra in The Awakening, a Technician in Vengeance on Varos and a Native in Trial of a Timelord: Mindwarp. In Blake's 7 he was a a Federation Trooper in Project Avalon & a Kairos Guard / Labourer in The Harvest of Kairos.

Robert Goodman was a Mandrel in Nightmare of Eden. He'll be back as a Gallifreyan in Arc of Infinity, a Buccaneer Guard/Wrack Deck Crew/Striker Deck Crew in Enlightenment, a Colonist in Frontios, a Crewmember in Resurrection of the Daleks and a Crew member/Loader / Hyperion III Officer in The Trial of a Time Lord as well as playing Reg in the new series episode Listen. He also was in The Spy Who Loved Me as a Stromberg's Guard, has an episode of one of my childhood favourites Pipkins on his CV where he plays a Dustman in The Sink, is in the Yes Minister episode Jobs for the as Robert the Waiter, A Fish Called Wanda as a Street thug.

Tom Gandl returns as one of the Peasants in the Village Centre in State of Decay, a Villager in The Visitation, and a Male Onlooker in Rememberance of the Daleks. In Blake's 7 he was a Kairos Guard / Labourer in The Harvest of Kairos.

Ian Ellis returns as a Kinda in Kinda and as the location version of Trooper Marshall in Earhtshock . In Blake's 7 he was a Hi-tech Patient in Powerplay and a guard in Traitor. A former child actor, he had appeared in The Day the Earth Caught Fire as Michael Stenning.

Malcolm Harvey later plays the Ergon in Arc of Infinity. In Blake's 7 he was a Space Princess Guard / Passenger in Gold.

I fluctuate on Full Circle: sometimes I like it, other I don't. Last time viewing fell in the second category: the music was intrusive, everybody bar the Doctor was annoying and in our sequential viewing it marks the start of us being saddled with Adric and the end for Tom Baker. This time it's worked out a bit better!

Full Circle was repeated from 3rd to 6th August in 1981, the first of two stories from the season repeated that summer. It was novelised by Andrew Smith in 1982. The E-Space Trilogy, containing Full Circle, State of Decay & Warriors' Gate, was released on video in 1997 and on DVD on 26th January 2009.

Doctor Who Season 18, including Full Circle, was released on Blu-Ray on 18th March 2019.