While travelling to Gallifrey the Tardis passes through something. The scanner shows them on Gallifrey but stepping outside they find themselves on a lush forest world. At a nearby riverside a group of teenagers are trying to steal fruit but witness the arrival of the Decider Draith & Dexeter who examine the fruit finding traces of an insect egg. The teenagers, a group known as the Outlers, retreat to their cave where their leader Vash is joined by Adric, his younger brother who wants to join them. They challenge him to steal the riverfruit. As he does the lakes start to bubble and a mist forms: the Mistfall that the Deciders fear. The Deciders summon their people back to the starliner giving them two hours to comply. Draith witnesses Adric stealing the fruit and pursues him. They tussle and Draith falls to the ground. Citizen Logan searches for his daughter, a member of the Outlers. Draith is sucked into the water instructing Adric to tell Dexeter they have come full circle. A fleeing Adric find the Tardis and is let on board by the Doctor & Romana. As they treat his injuries the Starliner is sealed with Logan's daughter and Decider Draith still missing. The Doctor & K-9 investigate the mist, and while at the waters edge witness creatures rising from it...... 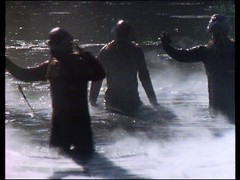 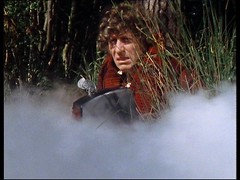 A bit of a game of two halves, with both halves being good. Firstly something has happened to the Tardis: it believes it's on Gallifrey, where th Doctor and Romana were summoned to at the end of the previous story Logopolis, when it obviously isn't. 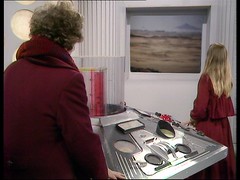 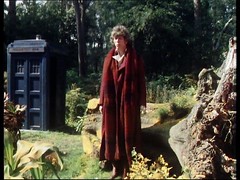 Secondly where they are has some odd stuff going on with mist and monsters suddenly appearing. Lots of questions. And some continuity dropped in too:

DOCTOR: Well done, K9. Well, now we've dropped off our Earth friend we can be on our way.
ROMANA: You've made up your mind, then?
DOCTOR: Oh, yes. We can't resist a summons to Gallifrey. Anyway, I'm so looking forward to seeing how Leela and Andred are getting on. You can meet your twin, K9. You know Romana, it. Romana?

At the end of Meglos the Doctor and Romana left Tigella with the Earthling that Meglos had been possessing, his return is mentioned at the top of the show. Leela was the Doctor's companion prior to Romana who remained on Galifrey, marrying Commander Andred of the chancellery guard. The original K-9 stayed with them! 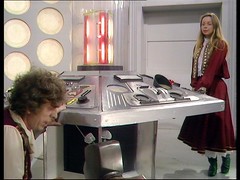 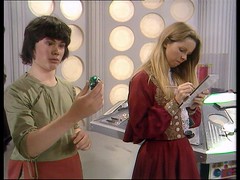 ROMANA: You'd better take this.
ADRIC: Oh, a homing device.
ROMANA: Yes. It'll help you find your way back to the Tardis.

We'll be seeing the homing device again, oddly enough in a story written by the director of this one!

This story was written by Andrew Smith, a teenage fan of the show, and is his only produced script for the series. You can hear him interviewed in Toby Hadoke's Who's Round Number 3 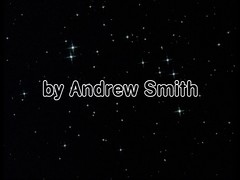 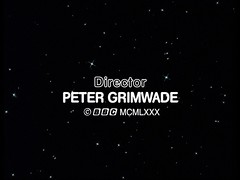 The director is first timer Peter Grimwade. He'd risen through the ranks at the BBC, serving as a production assistant on Spearhead from Space, The Dæmons, Robot, Pyramids of Mars, The Robots of Death (where he gave his name to the medical name for Robophobia, Grimwade's syndrome) and Horror of Fang Rock. He's almost certainly the best new director found at this stage of the season and ends up directing Tom Baker's swansong Logopolis, returning to direct Kinda and Earthshock for Peter Davison's Fifth Doctor as well as writing Time Flight, Mawdryn Undead & Planet of Fire. He should have directed the final story of Peter Davison's second season, Warhead, but when that gets cancelled he accidentally sets in motion a chain of events which sours relationships behind the scenes with considerable consequences. 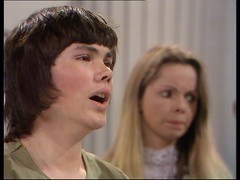 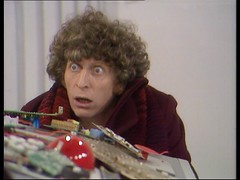 It's also the debut of Matthew Waterhouse as Adric. Waterhouse was also a fan of the show, having a letter published in an early issue of Doctor Who Weekly (#3 if I recall correctly but seeing as the issue is in a box, in the loft and under my Big Millennium Falcon I ain't getting to it any time soon!). 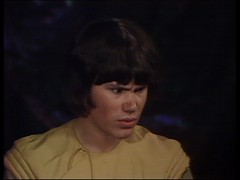 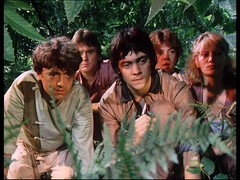 Adric's brother Vash leads the Outlers, a band of teenage rogues separating themselves from society. There's five of them here: Tylos, Vash & Keara at the front and two more unnamed at the back. One of them is played by Terry John Wood while the other is Nick Staverson. I think Staverson is on the left as I've a vague memory of what he looked like when he was Harry in No. 73. They run off back to the Starliner in this episode and are seen onboard as citizens for the rest of the story.

In this episode only is Leonard Maguire playing Decider Draith. IMDB shows him to have had a long career, I don't recall seeing him in anything else. He's stunt doubled by Stuart Fell, who by this point had already filmed his role in the following story State of Decay. 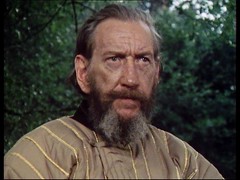 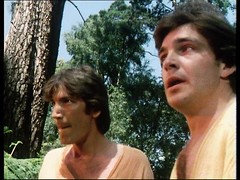 Last time I blogged this story I wrote:

Adrian Gibbs, playing Rysik (who I assume is one of the humanoids living in the Starliner)

Thanks to the dialogue transcript for this episode I've worked out that he's the man to the left of the picture. Adrian Gibbs will return to Doctor Who in four stories time playing The Watcher in Logopolis and then as an extra in Black Orchid. For completeness sake his friend on the right, who gets more dialogue, is Omril played by Andrew Forbes

There's LOTS of Starliner Citizens in this story. The following are in just the film sequences in this episode only:

Mike Mungarvan had been a Mutant in The Mutants, a Guard in The Face of Evil, a Gallifreyan (IMDB says an Outsider/Outcast Time Lord) in The Invasion of Time, a Druid in The Stones of Blood, a Gracht Guard in The Androids of Tara, a Dalek Operator in Destiny of the Daleks, a Louvre Tourist & Plain Clothes Detective in the Louvre in City of Death, and one of the Pangol Army in The Leisure Hive. He returns as Crewman Kilroy in Warriors' Gate, a Kinda Hostage in Kinda, one of Ranulf's Knights in The King's Demons, a Soldier in Resurrection of the Daleks, a Jacondan Guard in The Twin Dilemma, a Resistance Fighter in The Trial of a Time Lord: Mindwarp, the Duty Officer in The Trial of a Time Lord: Terror of the Vervoids, a Lakertyan / Tetrap / Genius in Time and the Rani and a Policeman in Silver Nemesis. He's also been in the new series once as a Passer By in The Christmas Invasion. He was in Blake's 7 as a Prisoner in The Way Back & Space Fall, an Alta Guard in Redemption, a Customer / Gambler in Gambit, a Helot in Traitor and a Rebel Technician / Federation Trooper in Blake, making him one of the few people to appear in the first and last episodes of that series. He was also in Fawlty Towers as a Hospital Orderly in The Germans, The Sweeney as a Constable in Victims and The Professionals as Will in Black Out.

Martin Grant was a a Soldier in Masque of Mandragora, a Coven Member in Face of Evil, and a Young Rebellious Time Lord in Invasion of Time. He returns as a Plasmaton & Passenger in Time-Flight and a Lazar in Terminus.

Kevin O’Brien played one of the Pangol Army in The Leisure Hive. He returns as a Cricketer/Spectator in Black Orchid, Trooper Collis in Earthshock, the Photographer in Time Flight, a Guard in Arc of Infinity, a Vanir in Terminus, one of Ranulf's Knights in Kings Demons, a Crewmember & Soldier in Resurrection of the Daleks, a Guardolier in Timelash, a Resistance Fighter in Trial of a Timelord: Mindwarp and a Court Guard in Trial of a Timelord: Terror of the Vervoids & Ultimate Foe. In Blake's 7 he was a Technician in Dawn of the Gods and he plays a Hell's Angel in Red Dwarf: Meltdown.

David Payne returns as a Castrovalvan Man in Castrovalva and a Citizen/Unbeliever in Plant of Fire.

Ray Sumby returns as a Guest Gambler in Enlightenment. In Blake's 7 he is a Hooded Figure in Cygnus Alpha and a Federation Trooper / Rebel in Rumours of Death.

Julie Mellon can be seen in Fawlty Towers as Mrs. Watson in A Touch of Class.

Arthur Parry can be seen in Some Mothers Do 'Ave 'Em at the Reunion in The R.A.F. Reunion.

Kay Williams, Jill Annette & Chris Cole are all making their only Doctor Who appearances here.

Also just on film and appearing in this episode only are the Swimming Teens played by Andrew Manson, who had been in I, Claudius In A Touch of Murder he was a Slave and in Family Affairs he was a Guardsman, and David Greenway

In the film sequences and the rest of the story we have Sarah Parry, who's got quite a bit of 80s comedy on her CV and Michael Dray, who's making his only Doctor Who appearance.

Returning in other episodes, but missing out on episode 3 we have Chris Holmes who was a UNIT Soldier in Day of the Daleks, a Guard in The Time Monster, a Miner & Guard in The Monster of Peladon, a Muto in Genesis of the Daleks, a Peasant, Traveller, Workman Peasant, Brother & Soldier in The Masque of Mandragora and a Time Lord in Invasion of Time. He returns as a Plasmaton in Time-Flight, a Ambril’s Attendant in Snakedance, a Orderly in Frontios, a City Person on Street in Attack of the Cybermen, a Natives in Trial of a Time Lord Mysterious Planet and a Genius in Time and the Rani. In Blake's 7 he was a Federation Trooper in The Way Back, a Prisoner in Space Fall, a Prisoner in Cygnus Alpha, a Mutoid in Duel, a Mutoid in Project Avalon, a Star One Technician in Star One and a Hi-tech Patient in Powerplay. In A Perfect Spy he plays the Second Reporter in episode 3.

Also missing in just episode 3 is Ray Hatfield who returns as a Kinda in Kinda.

Around the time this episode aired word leaked out to the press that Tom Baker would be leaving Doctor Who.