"Oh! Nasty. That could have been me!"

Romana & the Savants interrupts the Doctor's sacrifice and saves him. Arriving of Zolfa Thura, Meglos positions the dodecahedron at the centre of the screens and causes it to grow to giant size filling them. Lexa saves Romana's life as she's shot at by a dying Gaztak. The Doctor takes Romana, K-9 and the savants Caris & Deedrix to Zolfa Thura, where Meglos is about to use the Dodecahedron's power to destroy Tigella. The Doctor impersonates Meglos and reprograms the instruments, moving the target away from Tigella. The Gaztaks capture both Meglos and the Doctor taking them to their ship and General Grugger starts the countdown to activate the screens. K-9 and Romana free the Doctor & Meglos, but Meglos' human host rebels, forcing Meglos to abandon it and flee. The Doctor flees with K-9, Romana, the Savants & Meglos' freed human host to the Tardis, leaving just as the structure on Zolfa Thura is destroyed. The Tigellans start to venture onto the hostile surface on Tigella, and the Doctor prepares to take the human host home as he and Romana receive a summons to Gallifrey...... 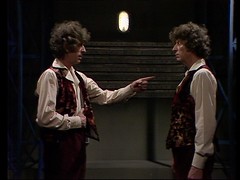 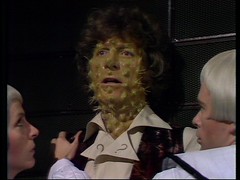 Someone want to tell me why the Doctor took the savants to Caris & Deedrix, played by Colette Gleeson & Crawford Logan, to Zolfa Thura? He doesn't need them and they only seem to be there because the lot needs two people to restrain the Meglos Earthling in the confrontation!

If you think there's something odd about the closing music to this episode then you're right: it's been played an octave lower. It also starts rather earlier than in most episodes because Meglos 4 is a rare sub 20 min episode, 19:36 and then 2m45s is lost at the start to titles and recap from episode 3!

The ending leads us nicely into the rest of the season:

DOCTOR: It's time this thing had a thorough overhaul!

We'll pick this one up in the final story this season, Logopolis, but the theme of entropy, of things running down and needing repair, is very much present in this story too.

ROMANA: Doctor?
DOCTOR: Yes?
ROMANA: Gallifrey.
DOCTOR: What?
ROMANA: They want us back immediately.
DOCTOR: Gallifrey? Do they, indeed.....

We'll pick this theme up in the next episode.

And as a series Meglos isn't at all good: it's just dreary, mediocre and bland. Having checked a forum I frequent for some information, I discovered that when this came out on DVD and I sat down to watch it with Liz, halfway through episode 1 we were both in the kitchen making tea and fetching food while it played to itself in the living room! The religion vs science stuff, while possibly more novel at the time, is very heavy handed and dated now. The authors wanted to do it as a comedy, the director did it straight and it's a bit of a disaster. The comedy comes through with the incompetent Gaztecs and the mistaken identity but it doesn't really work for me feeling, as I said above, like younger children's television!

Meglos was novelised by Terrance Dicks and was the last Fourth Doctor book published, leaving Pirate Planet, City of Death & the untransmitted Shada missing from the Target book range. It was released on video in March 2003 and on DVD on 10th January 2010.

And, if all is well, I never have to watch it again now!

(But I said that last time I watched this for a blog and here I am again ....)