"There will be a rather large bang, big enough to blow up Zeos, take Atrios with it, and make certain the whole thing ends in a sort of draw. That's the way these military minds work. The Armageddon factor."

The Doctor sends Shapp & Merak back to Atrios to stop the Marshal but Merak is distracted by an illusion of Astra and is captured while Shapp is stunned by one of the Shadow's servants as he enters the transmat. The Doctor creates a fake sixth segment to use the power of the other five to time loop the Marshal's ship to prevent it attacking but as the fake segment decays the loop stretches. Astra is controlled by the Shadow and he sends her to retrieve the segments the Doctor has. K-9 is lured to the Shadow's base planet through a computer distress beacon placed in a transmat. Astra uses Merak to get introduced to the Doctor then, on the pretext of taking him to Atrios, abandons him in the corridors of Zeos. The injured Merak transmats back to Atrios but Astra, pursued by the Shadow's guards, is sheltered in the Tardis and is attracted to the Key To Time. The Doctor moves the Tardis to the Shadow's base planet, lying between Atrios & Zeos where the Shadow and a controlled K-9 are waiting.

I said last episode that I remembered nothing of that episode from my youth: the same applies here! When I last watched these for the blog I said

I also said that I'd watched these episodes a few days prior to writing the text (a long story involving my mother being hospitalised and dog sitting) One of the side effects of this is I'm reading the text above, written while watching the episode, and still remembering nothing of note. That may be an indication of it's quality in the middle of a six part story!

It's quality also isn't helped by the money having blatantly run out as testified to by the sheer number of reused props! Last episode we had some we had some UFO computer banks but this episode is prop spotting heaven!

I wouldn't have spotted either of these without the knowledge that the first appear in a future story in the same colour.

Behind the head of the pilot, played by Pat Gorman, is a black square panel. It's a repainted 2001 spacesuit chest unit, last seen under the desk in Stones of Blood in it's usual orange! That got me looking at the rest of the picture and in particular the thing just left of middle at the top. That's a 2001 Spacsuit backpack, again repainted black. 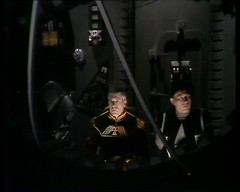 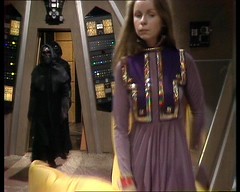 Both pop up later in the episode, here they both are near the Transmat on Zeos!

Then later I spotted the console in Mentalis' control room: 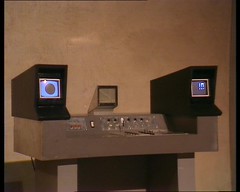 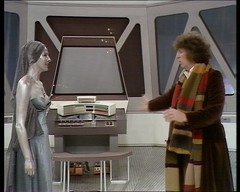 That's the console the spacesuit chest units were under in Stones of Blood. I'm told it was also in Underworld but it's original was in the Main Mission set in Space: 1999!

Then there's this box by the Tardis. There's two of them, one either side of the chair they sat the Doctor in while interrogating him last episode: 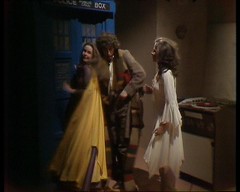 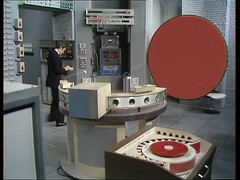 That was previously in The Green Death and, since it is with a pile of UFO computer banks, probably came from UFO too!

This is the first Tom Baker six part story to be made entirely in the studio, which unfortunately removes me telling you about the story's location filming as an option. The last entirely studio bound six parter was Jon Pertwee's penultimate story, The Monster of Peladon, five years previously in 1974. Before that the next previous six parter made in the studio was 1969's Patrick Troughton story the Space Pirates.

Playing Princess Astra of Atrios is Lalla Ward, the stage name of the honourable Sarah Ward, daughter of Edward Ward, 7th Viscount Bangor. Having studied at drama school from 1968-1971 she'd worked for a few television series.... but this role would prove to be a vital one for her getting her noticed and cast in the role for which she became famous for. More on this shortly..... She had previously had a leading role in The Duchess of Duke Street where she played Lottie, the title character's daughter. Outside of Doctor Who the thing most people will have seen her in is The Professionals episode When the Heat Cools Off where she plays Jill Haydon. This episode is the only one in the regular repeats package that still has the original season 1 title sequence. 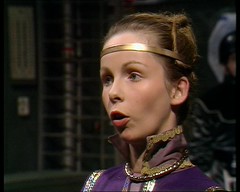 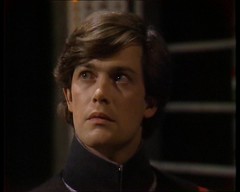 Her love interest Merak is played by Ian Saynor. This was his second broadcast tv job.

I was convinced John Woodvine, here as the Marshal, had been in more than one Doctor Who but apparently not! His main claim to fame is appearing in 60 episodes of Z-Cars as Det. Insp. Witty but he can also be found in the cult classic An American Werewolf in London as Dr. J. S. Hirsch, Edge of Darkness as Ross, The Tripods as Master West 468 (was he just the voice or in the costume?) and Knights of God, second Doctor Patrick Troughton's last transmitted TV work, as Prior Mordrin. 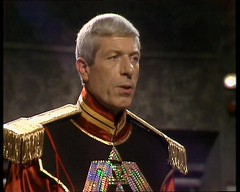 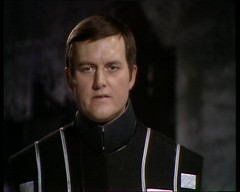 Davyd Harries plays Major Shapp. He was in the missing Out of the Unknown episode 1+1=1.5 as Yates and the Blake's 7 episode Moloch as Doran.

Davyd Harries is responsible for the worst prat fall in Doctor Who during this episode when he's shot by the Mutes in the teleporter! 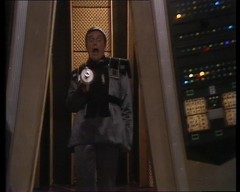 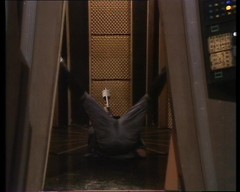 Two days after this episode was broadcast the Blake's 7 episode Trial was shown.