"I know who you are, Doctor. I have always known. I have been waiting for you. I too serve a Guardian. A Guardian equal and opposite in power to the one who sent you. The Black Guardian, he who walks in darkness, and you are in the valley of the Shadow!"

Leaving the Tardis the Doctor becomes separated from Romana & Astra. Astra takes Romana to the Shadow while the Doctor, following the computer distress beacon K-9 detected, find his old classmate Drax, who was forced to create Mentalis by the Shadow. They start work on a device using Drax's damaged dimensional stabiliser. K-9 is sent to demand Romana's life in return for the five segments of the Key to Time. Drax is set to work freeing K-9 from The Shadow's control. The Doctor bargains with the Shadow, who says he has the sixth segment, and goes to fetch the Key segments from the Tardis but as he opens the Tardis door Drax blasts him with the gun they've made 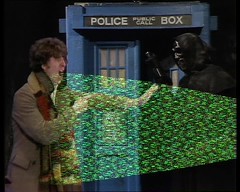 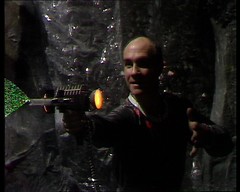 That's quite a shocking ending with the Doctor's former classmate and old friend Drax shooting him, and shooting him once he'd got the Tardis door open so The Shadow could get the Key To Time! There again there had been an exchange earlier about him working with the Shadow:

DRAX: Well, Doctor, welcome to my world.
DOCTOR: Aren't they stabiliser components?
DRAX: Yeah, they are.
DOCTOR: But you said your Tardis was parked on Zeos.
DRAX: Yeah, well, I took the stabiliser out. Needs a bit of work.
DOCTOR: How long have you been here?
DRAX: About five years. After the war started.
DOCTOR: Five years? For five years you've had a dimensional stabiliser virtually intact and you haven't managed to escape?
DRAX: I told you, it needed work.
DOCTOR: Oh, come on, Drax! You could have repaired that and long-dogged it out of here years ago.
DRAX: Here, what's the game? Oh, I get it. You think I'm in with the Shadow, don't you.
DOCTOR: Aren't you?
DRAX: Now would I.
DOCTOR: Yes, you would. What's he offered you?
DRAX: Nothing.
DOCTOR: Are you about to suggest that you and I make a run for it out of here in my Tardis?
DRAX: Well, it's a good idea.
DOCTOR: Oh yes, it's a very good idea, you and me in my Tardis. And what happens then when we're inside, eh? Sock full of sand, lead pipe and you away with the Key to Time, am I right, Drax?
DRAX: Look, I didn't know it was going to be you, did I. He threatened me with the chop, didn't he. He said I was the only one who could get hold of it.
DOCTOR: If you had, do you think he'd let you get away? You'd be in for the chop, too.
DRAX: Yeah, I would, wouldn't I.
DOCTOR: Of course you would. So why don't you help me? I mean, together we stand a slight chance. And after all, we are Time Lords, you and I. Class of ninety two. If we don't stick together, who will?

And it's not as if other classmates of the Doctor haven't tried to kill him repeatedly in the past have they?

In the first episode of this season the White Guardian told us what he wanted the Key To Time for:

WHITE GUARDIAN: The Key to Time is a perfect cube, which maintains the equilibrium of time itself. It consists of six segments, and these segments are scattered and hidden throughout the cosmos. When they are assembled into the cube, they create a power which is too dangerous for any being to possess.
DOCTOR: Well hidden then, I hope, sir.
WHITE GUARDIAN: There are times, Doctor, when the forces within the universe upset the balance to such an extent that it becomes necessary to stop everything.
DOCTOR: Stop everything?
WHITE GUARDIAN: For a brief moment only.
DOCTOR: Ah.
WHITE GUARDIAN: Until the balance is restored. Such a moment is rapidly approaching. These segments must be traced and returned to me before it is too late, before the Universe is plunged into eternal chaos.


Now we find out what the opposition has planned:

SHADOW: You have your Guardian and I have mine. You and I are on the same quest, Doctor, but whereas you have been scavenging across space and time, I have located the sixth piece here. You are inferior, just as your powers are inferior. Once we have the Key to Time, we shall set not two small planets but the two halves of the entire cosmos at war, and their mutual destruction will be music in our ears. Unlike others, it is not power we seek, but destruction that we glory in. Fetch the Key.


And a hint that a nasty fate lies in wait for the captured Princess, finally released from The Shadow's control:

SHADOW: Now, my Princess, your work is done. Your destiny is at hand.
ASTRA: Who are you?
ROMANA: The Shadow.
SHADOW: The Shadow that accompanies you all.

DRAX: Hello, Theet. How you been, boy?
DOCTOR: What?
DRAX: It is Theet, innit? Theta Sigma? Yeah, 'course it is. Remember me, ay? 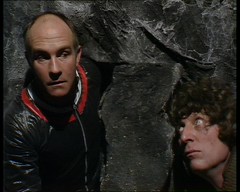 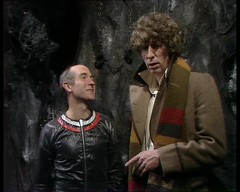 DRAX: Drax is the name.
DOCTOR: Drax?
DRAX: Come on, Theet. Class of ninety two?
DOCTOR: Not
DRAX: Yeah?
DOCTOR: Drax.
DRAX: Yeah. We was on the tech course together. Long time ago now, Theet, eh? Must be what, four hundred and fifty years? And a long way from Gallifrey.
DOCTOR: Yes, Gallifrey. Of course! Ha, ha! Drax.
DRAX: Yeah, I was all right at practical, remember?
DOCTOR: Yeah.
DRAX: Temporal theory did me. Still, you did well, mind, getting your doctorate and all that.
DOCTOR: What happened to you?
DRAX: I failed, didn't I. Still, not to worry. I was doing all right till this lot. I went into repair and maintenance. Do anything, anytime, anywhere. I've been all over the galaxy. Buy a bit, do it up, sell it.
DOCTOR: Yeah. What sort of things?
DRAX: Cybernetics, guidance systems, you name it.
DOCTOR: Armaments?
DRAX: Yeah, and that. Not on a regular basis, of course.
DOCTOR: Drax, I was introduced to a computer on Zeos. Called itself Mentalis. Did you by any chance have anything to do with the installation?
DRAX: Strictly under duress. That's why I'm here. The minute I finished the job, wham. Feet never touched the ground.
DOCTOR: The Shadow?
DRAX: I didn't know who he was, did I. Just another customer, I thought. And then he puts the heavy word on. Do it or die. I mean, what would you have done?
DOCTOR: Yes, very tricky.
DRAX: Yeah.


At this point five year old Philip rejoins the story recalling the Doctor's college friend Drax and the Doctor crawling around tunnels, throwing the controlled K-9 to him. Drax as a character had been floating around Bob Baker & Dave Martin scripts for a while, first appearing in early drafts of The Hand of Fear, as a slightly shady Time Lord Mechanic.

DOCTOR: Drax, I don't want to pry, but where did you acquire this peculiar vocabulary?
DRAX: Brixton, weren't it?
DOCTOR: Brixton?
DRAX: Brixton. London. Earth.
DOCTOR: I've been to Earth.
DRAX: Yeah, me transport broke down. Hyperbolics, as usual. And I was investigating certain possibilities with regard to replacements. I got done, didn't I. Ten years I got. Well, I had to learn the lingo, didn't I, to survive. Why, is there something funny about the way I talk?
DOCTOR: No, no. It's very colourful. Very demotic.
DRAX: Yeah, well thanks, Theet.
DOCTOR: Doctor.
DRAX: Oh yeah.
DOCTOR: No offence.
DRAX: None taken.

Drax is played by Barry Jackson, who was previously Ascaris in The Romans and Jeff Garvey in Mission to the Unknown. There's several other science fiction series on his CV including A for Andromeda where he plays a Sentry in two episodes, one of the few surviving third season Doomwatch episodes Hair Trigger where he plays Dr. McEwan, which you can see on The Doomwatch DVD and Blake's 7 where he's Dr. Kendall in Mission to Destiny. He was also various roles in An Age of Kings and is Bob in The Professionals episode Stake Out. 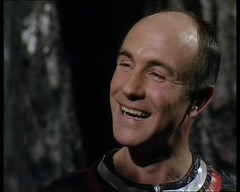 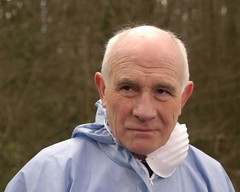 Nowadays Barry Jackson is best known as Dr George Bullard in Midsomer Murders where he appeared in nearly every episode from the show's inception till his departure in 2011. In a few of the earlier episodes that George Bullard doesn't feature in his place is taken by Dr. Dan Peterson played by Toby Jones, later to memorably play The Dream Lord in the 2010 Doctor Who episode Amy's Choice.

If IMDB had a tool similar to Cricinfo's Statsguru I'd try telling you how many other Doctor Who actors have been in Midsomer Murders. It hasn't so I shan't! But from this story John Woodvine has also done two episodes of it!

IMDB lists Stephen Calcutt as playing a Mute in these last two episodes. He was previously a Muto in Genesis of the Daleks and returns as a Marshman in Full Circle, and a Tribe member in Kinda. He also played Leonardo da Vinci in a second season episode of Rentaghost, was a Transylvanian in The Rocky Horror Picture Show and an Azurian Man in Flash Gordon.

Two days after this episode was broadcast the Blake's 7 episode Killer was shown.