553 The Keeper of Traken: Part Two

Tremas defends the Doctor taking him into his custody. Returning to the Grove, Melkur slays two Fosters whose bodies Kassia hides. Tremas falls under suspicion by associating with the Doctor but Consul Seron volunteers to enter rapport with the Keeper to defend him. Kassia reports this turn of events to Melkur who gives her a gift of a neckband

MELKUR: You have served me well, Kassia. At my feet you will find a gift. Wear it as a token of your allegiance. Now, the gentle irradiation and your allegiance is assured. Go now, Kassia. Be my eyes and ears. 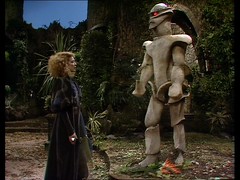 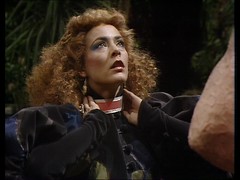 KASSIA: It is not as you predicted, Melkur. Seron will now enter Rapport.
MELKUR: There is much that you do not understand, Kassia.

Seron enters Rport with The Keeper with Kassia to keep vigil for him: 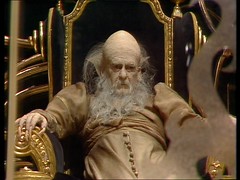 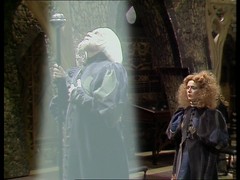 SERON: Your judgement, Keeper?
KEEPER: You are blameless, Seron, but doomed, and we are both betrayed.
KASSIA: Forgive me, Seron.
SERON: Consul Kassia!
KASSIA: Forgive me, but I serve a greater purpose.
SERON: Lost, degraded creature.
SERON You betrayed your Keeper and your sacred consular vows? Kassia, reject this evil. Reject it.
KASSIA: I cannot. Now, Melkur, now! 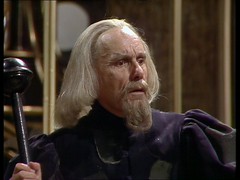 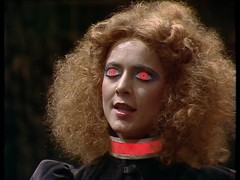 Kassia slays Seron and, interrupted by Tremas & The Doctor, orders them arrested but they flee to the Grove. The Doctor tracks the Tardis to the location in the Grove where they left it, but when they get there Melkur speaks to them, telling them recovering the Tardis won't help them.

MELKUR: Doctor, recovering the Tardis won't help you.
DOCTOR: So you're the cause of all this! 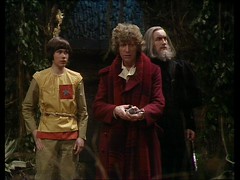 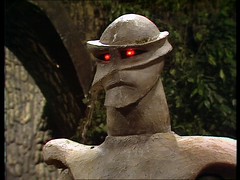 They are captured by Kassia and the Fosters and Kassia reports her success to the statue:

KASSIA: It is done Melkur!
MELKUR: Oh no, Kassia, it is only beginning! 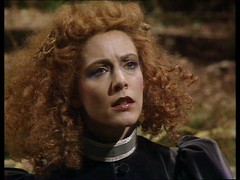 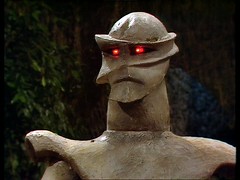 As this episode goes on I feel more and more sorry for Kassia.

KASSIA:I have failed you, Melkur, but spare my husband, I beg of you. You have promised.


She is doing what she is doing to keep her husband and is falling down a larger and larger hole. First Tremas takes the Doctor & Adric into his custody, putting his own life at risk

TREMAS: Wait. In honour to the truth, we cannot proceed.
KATURA: What truth, Tremas?
TREMAS: The charges have not been proved against the strangers. Consuls, under sacred law, I claim consular privilege and take them under my protection.
KATURA: Consular privilege?
KASSIA: No, Tremas. I'm doing this for you.
SERON: He is quite within his rights.
LUVIC: Maybe, but can't he tell us what's going on?
KATURA: Why this brave gesture, Consul Tremas?
KASSIA: Yes, why? Let it be.
SERON: We have no right to question him on that point. Very well. We place you both under the protection of Consul Tremas. You realise the consequences.
DOCTOR: Consequences?
SERON: Should you infringe the law here in any way, then his life too is forfeit.
DOCTOR: Ah yes, yes, very civil of you, Consul. And we'll do our very best to try and return the compliment, won't we, Adric?

And her Melkur appears supremely uninterested.

KASSIA: I tried, Melkur, but I failed. The Doctor is now protected by sacred law.
MELKUR: Your failure is irrelevant. The law which protects the strangers will presently destroy them.
KASSIA: And Tremas? What of my husband? You promised to save him. He must not become Keeper.
MELKUR: Your precious Keepers. They, too, are irrelevant. When this one dies, he will be the last of his kind here on Traken.
KASSIA: But Tremas is named as successor.
MELKUR: Named, perhaps, but what's in a name? Kassia is as good a name as Tremas.
KASSIA: I do not understand.
MELKUR: Understanding is not necessary to your task, Consul. Now listen carefully and obey without question.

Then Seron volunteers to stand before The Keeper, instead of Tremas:.

SERON: If there has been deceit, then I am to blame. Tremas did what he did on my advice.
KATURA: You? Seron.
LUVIC: Then in justice, Seron, you must enter Rapport.
KASSIA: No, that is not intended.
SERON: Intended, Kassia? By whom? Very well, we will put it to the test. I shall submit myself to Rapport. I ask that Consul Tremas keep vigil on my behalf.
KATURA: With Consul Tremas under suspicion too, that is hardly the best choice.
LUVIC: No, I
KASSIA: I shall keep vigil for you, Seron.
SERON: Thank you, Consul Kassia. Under your zealous eye we may be certain justice will be done. Now Consuls, you will excuse me. I must prepare myself.

But if Seron seeking raport with The Keeper was not the course of events Melkur had intended then what was Melkur's originl plan? To use Kassia to slay Tremas, and then with him out the way to procede as we shall see in episode 3? Would Kassia have obeyed such an instruction? Would that be a step too far for her?

And then, when the Doctor and her husband are captured, and she thinks it's all over, Melkur still wants more!

KASSIA: It is done Melkur!
MELKUR: Oh no, Kassia, it is only beginning!

But the big revelation to us as a viewer here concerns Melkur, that it isn't the evil but that there is something sitting in a darkened room watching through two eye shaped screens controlling it. 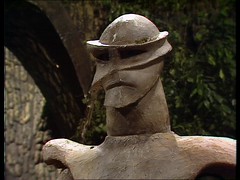 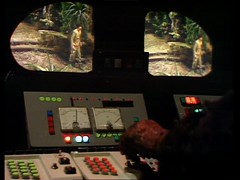 The full reveal of what's going on here will have to wait for another episode or so yet but there's some hints here. Whoever it is knows the Doctor:

MELKUR: So, your sheep stray from the fold, Doctor.

MELKUR: Find your Tardis, Time Lord. Much good will it do you now

And Melkur itself is giving off some strange but familiar energy reading.

ADRIC: The wave loop pattern's unmistakable.
TREMAS: Ah, you recognise the source of these energy emissions?
ADRIC: I thought they might be from some sort of a Tardis. I don't know what the Doctor thinks.
DOCTOR: The Doctor thinks you might have a very good point. This certainly looks like a Tardis generator, but you don't get shift ratios of this magnitude in an ordinary Type Forty.

The idea of a stone man isn't a new one and as I was watching this I was reminded of the Stone Men in the Tim & The Hidden People series of books I'd have been reading at school when this story aired: compare Melkur with the book cover image here. In fact 7, nearly 8, year old me has clear memories of watching this episode (I missed the first and only caught it on the repeat) and the scenes in the dark control room, the net falling on the Doctor and Melkur addressing Kassia at the end stick *very* clearly in my mind.

Sheila Ruskin, Kassia, has a long Television career on her CV, including an appearance in the classic I, Claudius (and I really must look at all the Who thesps in that) but is best known to science fiction fans as Alta 1 in the Blake's 7 episode Redemption (alongside Genesis of the Daleks' Harriet Philpin. She was in I, Claudius as Vispania in A Touch of Murder & Family Affairs, appears in The Sweeney episode Hit and Run as Judy Grinden and twice in The Professionals as Helen in Klansmen, which to his day remains unscreened in the UK, and as Susan Grant in Cry Wolf 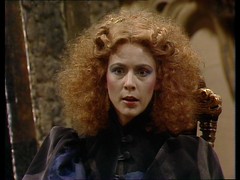 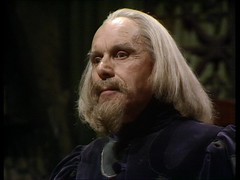 Her betrayed colleague Seron is a final Doctor who role for John Woodnutt who was George Hibbert in Spearhead from Space; the Draconian Emperor in Frontier in Space and both his grace the Duke of Forgill & the Zygon Leader Broton in Terror of the Zygons. He had been in Paul of Tarsus, alongside Second Doctor Patrick Troughton's Paul, as a Traveller in The Road to Damascus & The Feast of Pentecost. He appeared in the third season Out of the Unknown episode The Little Black Bag as Kelland: a large portion of this episode was found as a low grade print on a BBC video tape and was restored for the Out of the Unknown DVD Set. Children of my generation may remember him from the Look and Read story The Boy From Space where he played the Thin Space-Man: This too is availiblke on DVD. He appeared in one of ITV's Doctor Who competitors The Tomorrow People as Spidron in The Vanishing Earth, The Sweeney as Dr. Clare in Stay Lucky Eh? and Children of the Stones as Link. Towards the end of his career he had a recurring roll in Jeeves and Wooster as Sir Watkyn Bassett.

Consul Katura is played by Margot Van der Burgh who was Cameca in The Aztecs. She was also in Paul of Tarsus as Mary, Mother of Mark in The Feast of Pentecost, which also features John Woodnutt above, & Herod the King. 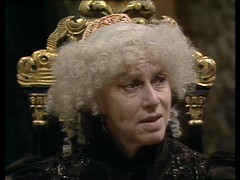 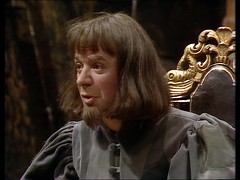 Consul Luvic is played by Robin Soans. You can see him in Inspector Morse: The Way Through the Woods as Alisdair McBryde, Jonathan Creek: Jack in the Box as Alan Rokesmith and Endeavour: Fugue as Ivan Straker. He's been in the 21st Century version of Doctor Who appearing as the Chronolocked Man in Face the Raven.

Playing the Keeper if Traken is Denis Carey who'd recently failed to appear on our screens as Professor Chronotis in Shada. He'll be back as the Old Man in Timelash. Carey can also be seen in I, Claudius where he's Livy in What Shall We Do About Claudius? and Blake's 7 where he plays Docholli in Gambit. 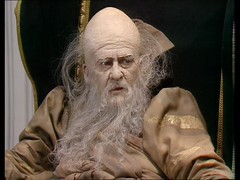 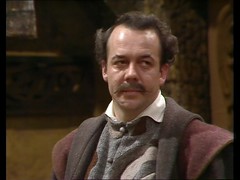 Playing the corrupt Proctor Neman - I'd never noticed Tremas' line about Neman's love of money before - is Roland Oliver. You can see him in The Bill as Sgt. Corrie and Inspector Morse as the Conductor in Masonic Mysteries.

The following played Fosters in part 1 and return as Citizens in part 2: Fred Redford, Donald Groves and Barry Summerford.

Several Citizens are in this episode who weren't in the first:

Eileen Brady had been an Aztec Lady in The Aztecs and the Old Lady in the Holo Demo in The Leisure Hive. She was also in Blake's 7 as the Harpist in The Keeper.

Sheila Vivian was a Control Room Assistant in Ambassadors of Death, Female Guest in Masque of Mandragora and a Citizen in Keeper of Traken. She returns as a Castrovalvan Woman in Castrovalva and a Worthy in Snakedance. She was in Doomwatch as a Woman in Burial at Sea.

Barbara Bermel had been a Villager in Planet of the Spiders, the Space Centre Receptionist in The Android Invasion, a female guest in The Masque of Mandragora, a Sevateem in The Face of Evil and an other in The Sun Makers. She returns as a Lazar in Terminus. In Doomwatch she was a Woman in Flood and in Space: 1999 she was a Thulian in Death's Other Dominion.

Liz Adams can be found in Miss Marple: Nemesis as a Coach Passenger

And from this episode the Fosters are joined by Pat Gorman! See Warriors Gate part 2 for a full reading of his Doctor Who credits!