"The more you put things together, the more they keep falling apart, and that's the essence of the second law of thermodynamics and I never heard a truer word spoken."

On Earth a policeman uses a police box to make a call but is cut off while it flutters visually and is pulled inside. Pacing the cloisters in the Tardis the Doctor decides to avoid going to Gallifrey, evading questions about what Romana has done, and instead suggests a trip to Earth. On Earth Australian air line hostess Tegan Jovanka is being driven to the first day of her new job by her Aunt Vanessa when the car breaks down. The Doctor decides to start the Tardis' long needed overhaul by fixing the chameleon circuit and travels to Earth to measure a real police box for use in Block Transfer Computations materialising round a Police Box on the Barnet Bypass next to the broken down car. Across the road from Vanessa & Tegan a white figure observes the events taking place, but vanishes when they try to summon him to help. The Doctor & Adric measure the police box, with the Doctor explaining about the Logopolitan Block Transfer Computations when the Doctor detects a gravity bubble. Popping out of the Tardis he sees the white figure in a field. 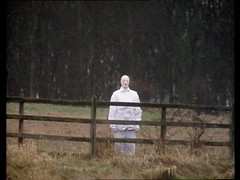 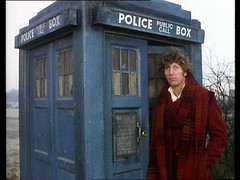 The Doctor & Adric open up the police box, finding a darkened Tardis control room and another police box within. Tegan goes to into the Tardis, believing it to be a real Police Box, just missing the Police Box within dematerialising. She quickly becomes lost in the Tardis' maze of corridors. The Doctor and Adric penetrate the second Police Box finding another yet darker Tardis within. Vanessa approaches the Police Box on the bypass and steps inside to be confronted by an unseen figure who laughs at her. The Doctor & Adric eventually break out of the nested Tardises with the Doctor meeting a police inspector on the road who shows him the shrunken bodies of Vanessa & the police man on the seat of Vanessa's sports car. The Doctor, observed by the white clad watcher, tells the police that this is the work of the Master. 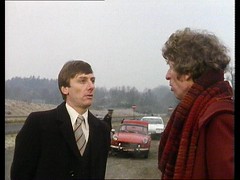 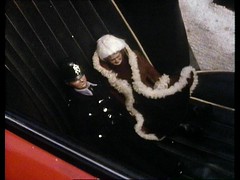 And so the end for Tom Baker's Doctor begins. We pick up the themes of entropy & decay that have been there all season the Doctor decides to fix the Tardis Chameleon Circuit:

DOCTOR: Chameleon circuit.
ADRIC: What? Doctor.
DOCTOR: Look, whenever you see me in this part of the Tardis, pacing up and down like this, be a good chap and don't interrupt me, will you, unless it's terribly urgent. It's not terribly urgent, is it?
ADRIC: Well, no.
DOCTOR: Good, so now you'll know in fact there's no need for you to come barging in here at all, but if it is terribly urgent you can always ring the Cloister Bell.
ADRIC: The Cloister Bell?
DOCTOR: Yes.
ADRIC: What's that?
DOCTOR: Well, it's a sort of communications device reserved for wild catastrophes and sudden calls to man the battle stations.
ADRIC: But the Tardis doesn't have battle stations.
DOCTOR: No, no, no, nothing along those lines. I sometimes think I should be running a tighter ship.
ADRIC: A tighter ship?
DOCTOR: Yes. The second law of thermodynamics is taking its toll on the old thing. Entropy increases.
ADRIC: Entropy increases?
DOCTOR: Yes, daily. The more you put things together, the more they keep falling apart, and that's the essence of the second law of thermodynamics and I never heard a truer word spoken. Come on. Come on.
(They sit on a small stone bench.)
DOCTOR: Have you seen the state of the time column recently? Wheezing like a grampus.
ADRIC: But it will get us to Gallifrey, won't it?
DOCTOR: Gallifrey? Oh yes, yes. Are you really set on going to Gallifrey?
ADRIC: Yes.
DOCTOR: Oh.
ADRIC: That is where we're going, isn't it?
DOCTOR: That's one of the questions I was just pondering. There's bound to be an awful lot of fuss about Romana. Why she stayed in E-space, official investigations, that sort of thing.
ADRIC: The Time Lords won't approve?
DOCTOR: What? She has broken the cardinal rule of Gallifrey. She has become involved, and in a pretty permanent sort of way. I think that you and I should let a few oceans flow under a few bridges before we head back home.
ADRIC: So we don't get to go to Gallifrey.
DOCTOR: Yes. Let me put another question to you. I have a place in mind that's on the way, well, more or less, give or take a parsec or two. It's my home from home. It's called Earth.

We've not seen Earth since the opening moments of the season on Brighton Beach in The Leisure Hive, although the insinuation is there that The Doctor and Romana paid it a visit between Meglos and Full Circle to return the Earthling Meglos had possessed home.

ADRIC: Earth's the planet with all the oceans, isn't it?
DOCTOR: That's the chap.
ADRIC: Wet.
DOCTOR: Britain is. That's the one place where we can find these blue boxes.
ADRIC: Tardises?
DOCTOR: Yes, but they're not. No spacious accommodation, no viewer screens. They don't even time travel. Just elementary Earth communications devices, and more or less obsolete by the time we'll be arriving there. There's some in the North that are still in use.
ADRIC: But we've got communications devices.
DOCTOR: But not a police box.
ADRIC: A police box?
DOCTOR: Yes. What the mathematical model of a Tardis exterior is based upon.
ADRIC: I'd like to see Earth, but why go all that way just to look at something that looks like the Tardis?
DOCTOR: Because I want to measure it.
ADRIC: Whatever for?
DOCTOR: Block transfer computation.
ADRIC: I've never heard of that.
DOCTOR: I'm not surprised. Logopolis is a quiet little planet.
ADRIC: Logopolis? But I thought we were going to Earth?
DOCTOR: No, that's the other place. We go to Logopolis afterwards.
ADRIC: You mean we're going to measure Logopolis, too?
DOCTOR: No, no, no. It's all to do with the chameleon circuit problem. We measure the police box on Earth, then we take the measurements afterwards to Logopolis.

All this takes place in the lovely set for the Cloister room, all stone and plants in the centre of the Tardis 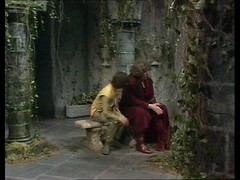 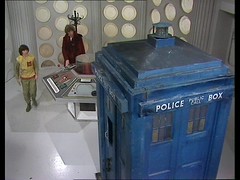 So they materialise round a real Police Box and in the process stumble into a trap set by The Master:

DOCTOR: Get back to the Tardis.
ADRIC: But this is the Tardis.
DOCTOR: A Tardis, perhaps.
ADRIC: It looks just like yours.
DOCTOR: Yes, down to the last detail. No, wait, wait. This could be terribly dangerous. You'd better stay with me. 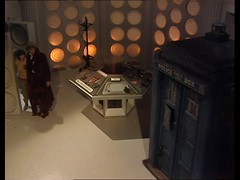 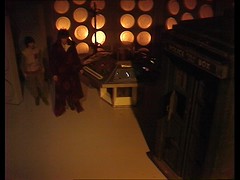 ADRIC: How many more of these are there? It couldn't be an infinite regression, could it?
DOCTOR: I hope not, because if it is, we'll never get out of it.

You do have to wonder how The Master knew they'd materialise round that Police Box at that time!

But at the same time we've got someone stumbling into the Tardis believing it's a real Police Box just like Dodo at the end of the Massacre. 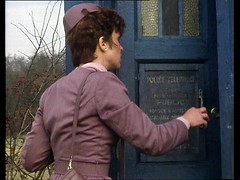 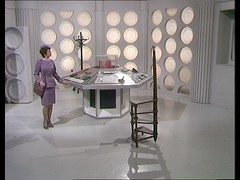 TEGAN: Hello? Anybody there? Well, there must be intelligent life at the end of this lot. Hello? Anybody receiving me? Hello? Come in, anybody. My name's Tegan Jovanka. I'd like to speak to the pilot. Is that the crew in there?

Playing airline hostess Tegan Jovanka is Australian born Janet Fielding. The character was probably designed to attract Australian money for a co-production that failed to materialise. It's not the last time that John Nathan-Turner would create a character with the intent of attracting money or audience from another country..... Tegan's character will give direction to the next year or so by wanting the Doctor to get her home in a manner similar to the original human companions Ian & Barbara. 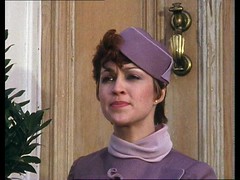 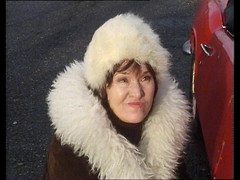 Playing Tegan's Aunt Vanessa is Delore Whiteman. I've not seen anything else she's been in but her daughters, Tracey & Jodie Wilson appear in Delta & The Bannermen as the band's backing singers.

Playing the the ill fated Policeman with Bike is Ray Knight. He was the UNIT Soldier in the bunker in Robot, a Sorenson Monster in Planet of Evil, a Man in Image of the Fendahl, a Mentiad in Pirate Planet, one of the Pangol Army in The Leisure Hive, and one of Lexa's Deons in Meglos. He returns as a Trion in Planet of Fire, a Guard in Vengeance on Varos, and one of Glitz's Crew in Dragonfire. He appears in Blake's 7 as a Federation Trooper in Countdown, a Rebel in Rumours of Death and a Federation Trooper in Warlord. 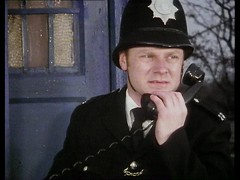 The mysterious Watcher is played Adrian Gibbs who was Rysik in Full Circle and returns as a Cricketer in Black Orchid.

Tegan's house is Number 43, Ursula Street, Battersea, London which was at the time the home of Andrew McCulloch, where he and John Flanagan wrote Meglos. 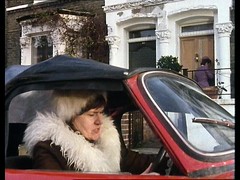 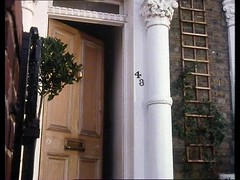 Meanwhile the "Barnet Bypass" is actually the A413 with the initial views of the bridge looking north towards Amersham and the lay by being located on the south bound carriageway roughly where the M25 now crosses it, with the railway bridge visible in the story carrying the train line between Deneham Gold Club & Gerards Cross stations. 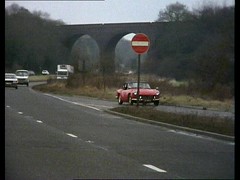 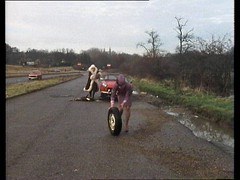 I've driven this road many times due to at one point having a girlfriend in Aylesbury (Hello Barbara!) but never realised it was a Doctor Who location until years later when I bought Richard Bignell's Doctor Who on Location. 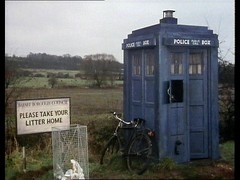 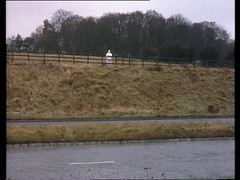 This location is a very short distance from the field used in Reign of Terror for the very first Doctor Who location filming.