555 The Keeper of Traken: Part Four

While Melkur completes his control over the source he orders that the three remaining Consuls, and the Doctor, be confined to their quarters. The Doctor thinks he recognises something about Melkur and Adric, sheltering in the Tardis with Nyssa, realises that Melkur has behaved just like a Tardis. They start creating a device to destroy the source manipulator. Melkur makes Proctor Neman a Consul and dispatches him to Tremas' quarters where he destroys the plans for the source manipulator. He is overcome by the Doctor who steals his Consular ring and with it he & Tremas gain access to the Keeper's chamber and start to override the source. Melkur takes control of Tremas and has him kill Neman who has failed him. The Doctor is summoned into the Keeper's presence and disappears, just as Adric arrives telling Tremas the device to destroy the source has been installed. The Doctor finds himself in the control room of his foe's new vessel and confronted by the decrepit and decayed form of his old enemy The Master! 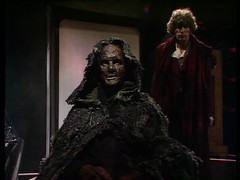 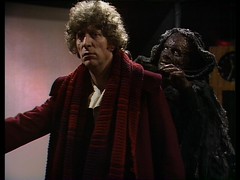 The Master intends to drain the Doctor's knowledge and then take the Doctor's body to replace his which has exhausted it's regenerations. His hold over the Doctor is broken when Adric & Nyssa's device disrupts the source, causing explosions and a fire to break out. The Doctor dives through a panel window and finds himself back in the Keeper's chamber where Adric completes the sequence expelling Melkur from the source. Consul Luvic reluctantly takes up the post of Keeper, Tremas arriving just too late to take up the post which was meant for him. The Doctor & Adric take their leave as Nyssa goes to tidy the mess the Fosters made of their quarters. 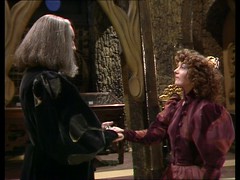 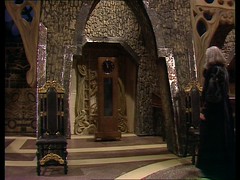 Tremas intends to follow but his eye is caught by a Grandfather clock, out of place in the Traken corridors. He goes to examine it and finds himself immobilised. 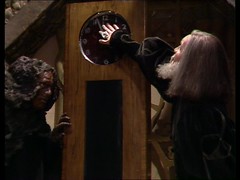 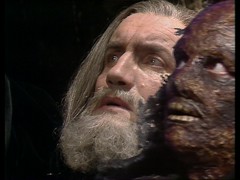 Out of the clock, his real Tardis disguised, steps the Master who takes over Tremas' form, turning it into a younger version of himself before leaving in his Tardis as a bewildered Nyssa seeks her missing Father..... 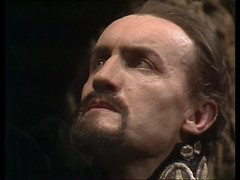 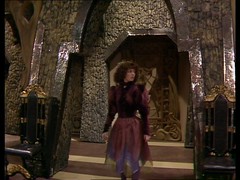 I had no idea who The Master was wtching this for the first time. The first episodes I'd seen were in 1978 and it had been two years earlier that the Master had last appeared in The Deadly Assassin and it was four & half years before that, before I was even born, that the original Master Roger Delgado was last seen.

But the story doesn't rely on you knowing who the Master is, it's obvious from what you've seen in the previous episodes that he's a nasty piece of work all of which is confirmed in the closing minutes as he seizes Tremas' body as his own, having failed to take possession of The Doctor's earlier in the episode.

So where was Tremas in the closing moments of the struggle that prevented him from becoming Keeper? Is he was in the room bellow disconnecting Adric & Nyssa's device and ensuring the continued survival of the source? It's not 100% clear what's going on there.

What is clear is that Melkur *ISN'T* the Master's Tardis. It certainly is *A* Tardis, the noises it makes on dematerialisation and rematerialisation are a bit of a give away there as are the roundelled walls. 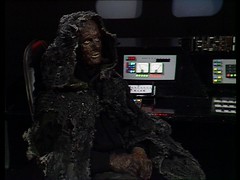 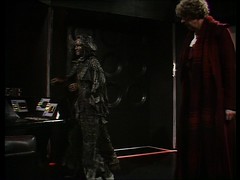 The Master refers to it as his new vessel at one point:

MASTER: Well, Doctor?
DOCTOR: Of course, the Master.
MASTER: Welcome to my new ship.
DOCTOR: I used to know an ancient remedy for mad dogs. I must look it up some time. Good library here, have you?
MASTER: Unfortunately for you, you will not be using it. This whole domain is now keyed to my biological rhythms. If you move a muscle, you will be destroyed.

My guess is that Melkur is the Tardis belonging to Chancellor Goth, the Master's Time Lord ally in Deadly Assassin, that the Master has purloined.

The Master's Tardis is the Grandfather Clock we see at the end, which was the form it occupied at the end of The Deadly Assassin and can also be seen in towards the rear of Melkur's control room. 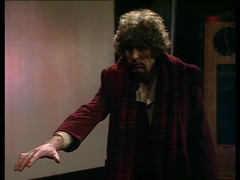 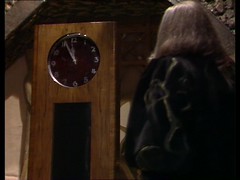 There's a very nice little touch with the Master's grandfather clock at the end: it's four minutes to midnight. Initially I saw that and thought of The Doomsday Clock (prominently featured in Watchmen), which would make this a joke at the season 19 story Four to Doomsday. But what I believe it's referring to is that there's four episodes to go before the end for Tom Baker's Doctor. Very nice & subtle touch.

Keeper of Traken obviously sands out in the memory as "The one that brought the Master back". But up until that it's been a decent and very solid piece of Doctor Who with the sets & the costumes setting it aside from the usual fare in the same way the video effects did for Warriors' Gate. Two very different stories but each in their own way set new high standards for the series.

Keeper of Traken was repeated from 10th to 13th August 1981, the week following Full Circle's repeat completing the now traditional two story repeat season. However, as we shall see in a few days time, these weren't the only stories from this season repeated.... Keeper of Traken was novelised by Terrance Dicks in 1982. It was released on video in June 1993 and as part of the Doctor Who - New Beginnings Boxset on 29th January 2007 with the two following stories Logopolis & Castrovalva.

Doctor Who Season 18, including Keeper of Traken, was released on Blu-Ray on 18th March 2019.

As hinted at above there's just four more Fourth Doctor episodes to go. Join us next week as we start Logopolis!